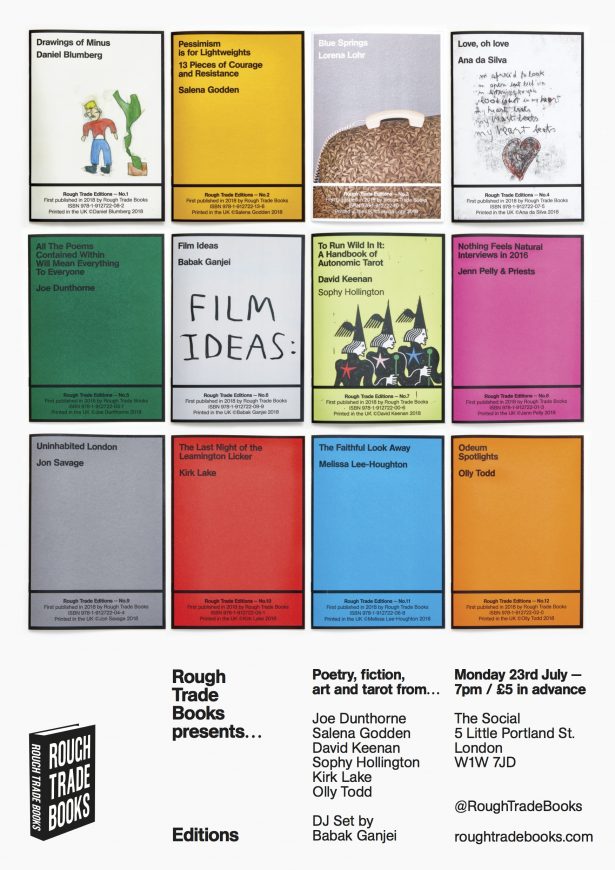 Rough Trade Editions comes hurtling out of the blocks with their first twelve pamphlets—twelve small good things to encourage, console, renew and rewire the world for their readers. Come celebrate at the launch party on Monday 23rd July at The Social, Little Portland Street where Salena Godden brings forth the fire of her recent work on resistance and rebellion, Olly Todd reconfigures a world of fractured time, the slipperiness of memory and dislocation and Joe Dunthorne lovingly skewers the eccentric heroism of the small poetry presses in a new short fiction. David Keenan and Sophy Hollington re-build our symbolic present with a radical tarot for the counter-culture presented as a work of experimental fiction (check out the exhibition in the upstairs bar whilst you’re there too).  Kirk Lake tells the last act of the story of Randolph Turpin, the Leamington Licker, and through it a story of the corruption of capital, pride and identity, while Babak Ganjei’s acts as DJ for the evening playing music that might soundtrack his pamphlet Film Ideaswhich presents a simultaneously melancholy and hilarious satire of the film world.