An Extract: Bunnyman – Will Sergeant 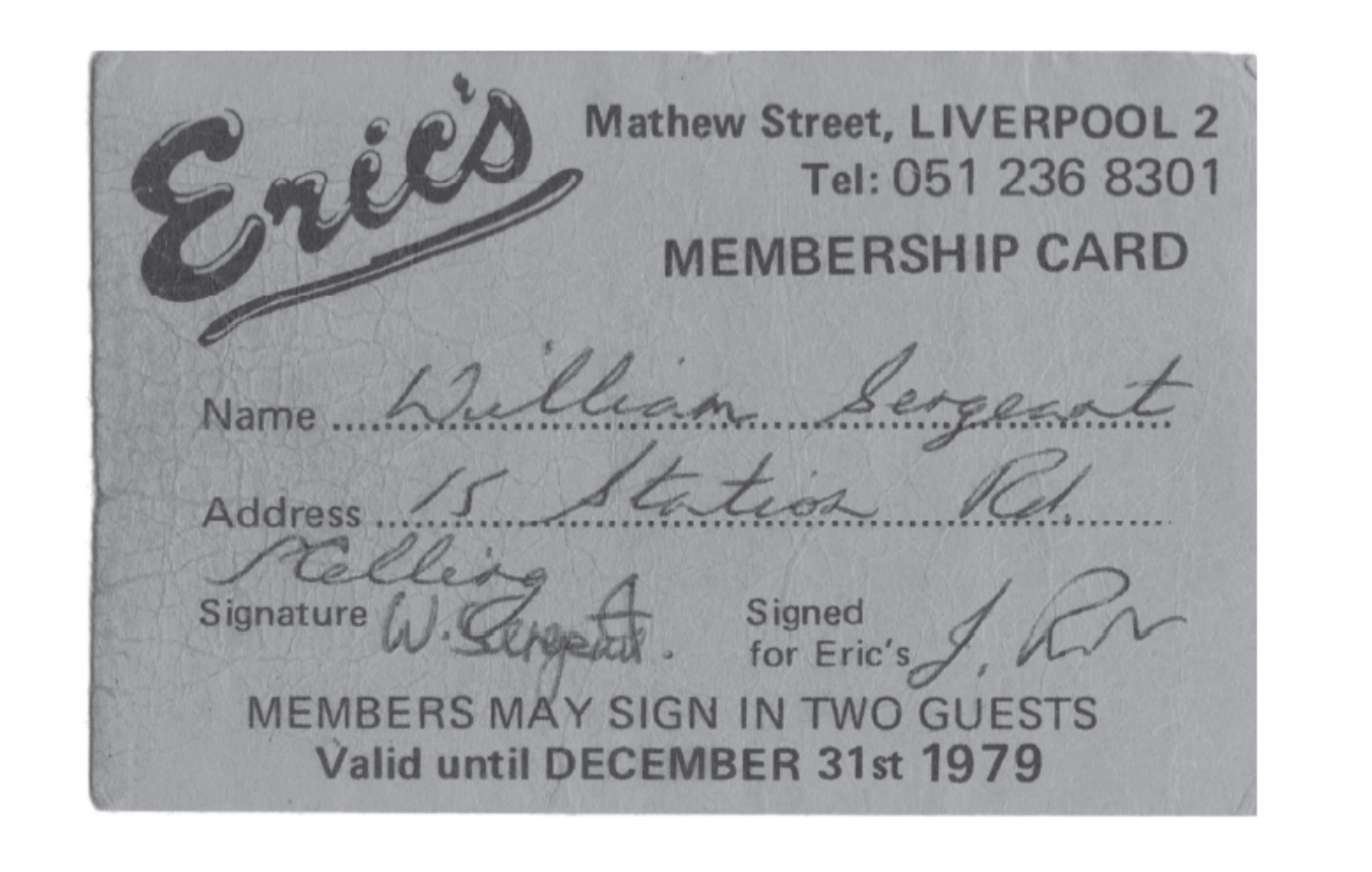 Ahead of the hugely anticipated (sold out) event with Will Sergeant and Bill Drummond at The Social later this month, we’re extremely chuffed to publish this extract from Will’s forthcoming autobiography Bunnyman.

It’s 13 July 1978, a normal night at Eric’s. There is a band on in the main room, but it is a weekday and not much attention is being paid to them. I decide to wander in and only a few others are watching the stage. The band’s bass player seems to be leading the songs with melodic lines not normally played on the bass. The drummer is accurately displaying a mastery of the drums. Out are the corny rock ’n’ roll fi lls that most other bands use to denote the verse from the chorus. He can convey that message with pure power, beating the shit out of the kit.

To his left is a black, flying saucer-shaped disc about the size of a dinner plate. Is it a Frisbee? No! It is a synthesised drum trigger called a Synare. These electronic drums are favoured by the disco scene and are generally used to make a high pinging sound, like on the recent Rose Royce hit ‘Love Don’t Live Here Anymore’. In between the songs, the drummer is hitting the Synare while he is twiddling a few knobs to change the tone. When it is hit, it makes a truncated whoosh sound. This drummer is using it to punctuate the drum pattern with an electronic white noise clacking tchuck tchuck, a sound not too dissimilar to a closed hi-hat in the style of Kraftwerk. The drums are kicking off now and the Frisbee is in the sequence of hits. The bass is soon to join in.

The bassist’s instrument is slung ridiculously low as he is strafing the tiny crowd with a sonic Gatling gun. The repetitive and hypnotic bass run is thickened with a droning open string: it’s a style all of his own. The guitarist is very neatly dressed in a shirt with sleeves rolled up; he has a job to do. His pressed sixth-form school trousers seem out of place here. He plays intermittent stabs and sequences of notes. I feel he has a slight Black Sabbath growl and the simplicity makes it all the more interesting.

The singer is a lanky lad, thin with a very ordinary haircut. He is wearing a pretty bad shiny shirt that someone at a disco might wear. It all looks a bit Eastern Bloc and that’s exactly how the song sounds too. His voice is low – very low. As the band build to a crescendo, the singer jerks into a weird dance, flailing his arms about like he is trying to ward off invisible demons that are attacking him. It is really something to behold. It could have been a comedic sight but for the intensity and seriousness that he and the other members of the band are displaying. The song finishes and I rush out to the bar area. I am excited and tell the others who are sat there expressing zero fucks about what is occurring in the main room. They are on the little raised area of seats by the bar, chatting. They have a few half-empty lager bottles about the table.

Over the sound of the drummer’s Synare tune-up, I am shouting and gesturing to Les, Paul, Macul and Julian to come in.

‘Quick, you have got to come in, this lot are amazing.’

They slowly amble into the room where a brand-new Joy Division is playing. Just last year, only a few months ago, they were called Warsaw and were pretty crappy. An average punk group, still with an angry shouting singer centre stage, but something has happened; how could this be? They have metamorphosed into an amazing outfit with a Cold War (as you already know, my favourite war) coolness that is original and truly its own thing.

The music is perfect for the current climate. The UK and the USA are always at loggerheads with the Soviet Union. Submarines, packing Polaris nuclear missiles, are constantly on high alert. They are creeping around the Arctic Circle ready to obliterate Moscow and the east. The Soviets are also lurking under the ice with their ballistic missiles trained on London and Washington and all points west. There is fear and a real possibility of nuclear war. No amount of ‘Ban the Bomb’ badges pinned to students’ lapels or beardy marches can make a difference.

In some weird way, the darkness of the late seventies atmosphere is impregnated into the songs of Joy Division. They manage to look like fascists and communists at the same time. (I am not suggesting they are either of these, by the way, before I get a lawsuit slapped on my ass; they just struck me like that.) To my mind, this is real Cold War music, a perfect soundtrack to our imminent doom if the Russkies decide to get all shirty with the West and, as they say in Liverpool, kick off big time. Joy Division are instantly my new favourite band and fit in nicely with my passion for the Manchester scene. Nothing like this has been seen before. All is now changed. This really is the death of punk in my eyes.