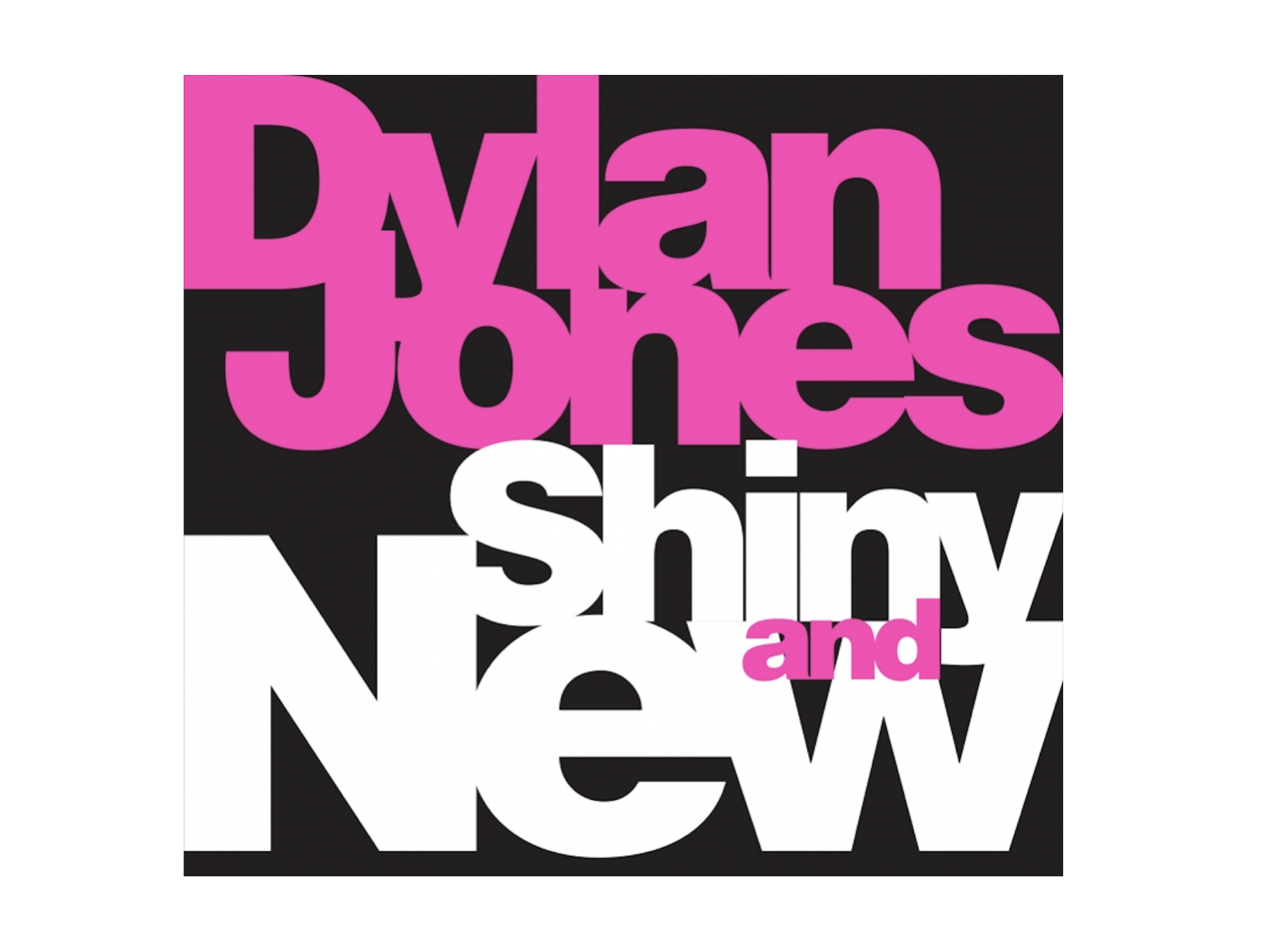 SHINY AND NEW, is a completely new take on the Eighties, a book which not only shines a light into the decade’s dark crevices, but which also used ten moments of pop perfection to illustrate the extraordinary musical variety that decade encouraged. The Eighties will never die, they just keep mutating!

The Eighties is often maligned as the decade of style over content, a time of image ruling reality, a period of homogenous, monotonous pop. In essence, the decade seemed to have a “kick me” sign on its back.

But the Eighties was actually one of the most inventive periods of pop culture, especially where music is concerned, a period which exploded in a kaleidoscopic splay of self-determination. As the new decade detonated, so pop exploded with it, no longer linear, no longer modernist, but fractured, post-modern, multi-channelled, multiplied. And very often brilliant – pushing on into the future, all graphite and glitter.

The decade unleashed a fusillade of new musical genres, and a wealth of genuinely unique musical styles. In terms of inventiveness, no other decade can touch the Eighties; no other period can boast such a vast archive of originality and intent. It was a decade on steroids, a decade augmented. A decade full of moments. A decade when the rigid stratification of musical spheres suddenly felt very old-fashioned.

There was – go on, deep breath – thrash metal, yacht rock, No Wave, hardcore, death metal, electro, house, go-go, techno, acid house, indie (“college rock” in the US), the burnished “quiet storm” soul-jazz of Sade (if you tuned in to FM radio any time after 10pm on a Saturday night in the mid-Eighties, and you didn’t hear “Smooth Operator” within twenty minutes or so, I think you were legally allowed to claim some kind of international tax rebate), and of course the beginning of the golden age of hip-hop. Then there was goth, synthpop, adult contemporary, new country, hi-energy, the global anglo pop of Duran Duran, the Eurythmics, Culture Club, Wham! and Spandau Ballet (funny trousers sweep the planet!), noise bands, and a lot of power ballads that were made instantly more appealing by the addition of a walloping great drum sound (usually an automated drum sound).

The Eighties was all about big drums, while the drum machine was one of the key armaments of the decade – almost every song in this collection has an electronic drum sound; the only one that doesn’t is “Bigmouth Strikes Again” by the Smiths, although even the band’s producer, Stephen Street, used a drum loop when producing the title track of the album it came from, The Queen is Dead.

So while on the one hand, technology was standardizing the way music sounded, rounding the corners, straightening the edges and turning the messy and the grandiose into something that worked on the radio, on the other hand it allowed you to be more inventive than ever.

In a sense this explosion of electronic experimentation was not so different from the psychedelic emancipation that sprang up in Los Angeles in 1965; but whereas the likes of the Byrds dropping acid for the first time (in the company of the Beatles) would result in them exploring new influences such as the free jazz of John Coltrane or the music of Indian sitarist Ravi Shanker, so the arrival of machines like the Oberheim DX drum machine, the Fairlight CMI and the Roland synthesizers completely changed how most records were made and produced. The Eighties would obviously produce its own drug subcultures, but it was the machinery that brought about radical advancement.

Whereas the Byrds’ Roger McGuinn talked about the band’s “jet sound”, Eighties’ electronica was actually the real sound of the future.

The Eighties also hosted an extraordinarily diverse selection of very contrasting artists: Madonna, Prince, the Smiths, the Stone Roses, ABC, New Order, S’Express, R.E.M., Husker Du, Prefab Sprout (hot dogs and jumping frogs), Guns N’ Roses, Scritti Politti, Run DMC, Jesus and Mary Chain, George Michael, Tracy Chapman, Bryan Adams, Echo and the Bunnymen, Dinosaur Jnr., Sonic Youth, Black Flag, Cocteau Twins, Aztec Camera, the Beastie Boys, Public Enemy, NWA and more – acts that couldn’t have been more different from each other if they had tried (and they tried). The decade saw the likes of Michael Jackson and Bruce Springsteen, who had started out in the Seventies, become proper global stars, having honed their image and their sound until they almost became caricatures of themselves, transfiguring pop in the process – along with Madonna and Prince they were big personalities with movie-star-sized heads.

There were some great albums, too, albums which have since become part of the pop pantheon: Pretenders by Pretenders (modern guitar pop), Sound Affects by the Jam (post punk pop), Songs the Lord Taught Us by the Cramps (goth), Bass Culture by Linton Kwesi Johnson (dub poetry), Dare by the Human League (peak synth), Rattlesnakes by Lloyd Cole and the Commotions (jangly college pop), Paid in Full by Eric B. and Rakim (minimalist hip-hop), Café Bleu by the Style Council (attitudinal blue-eyed jazz), Too-Rye-Ay by Dexy’s Midnight Runners (attitudinal Celtic soul), Remain in Light by Talking Heads (brainbox polyrhythmic rock), My Life in the Bush of Ghosts by Brian Eno and David Byrne (egghead sampled vocals and found sounds), 3 Feet High and Rising by De La Soul (psychedelic hip-hop), Rain Dogs and Swordfishtrombones by Tom Waits (junkyard rock), Diamond Life by Sade (modern coffee-table soul), Duck Rock by Malcolm McLaren (world hip-hop), Arc of a Diver by Steve Winwood (FM radio rock), Graceland by Paul Simon (African fusion), The Joshua Tree by U2 (stadium rock),Sign O’ the Times by Prince (DIY funk eclecticism),Imperial Bedroom by Elvis Costello (baroque and roll), Cupid and Psyche ’85 by Scritti Politti (arch blue-eyed sophistipop, or appropriation without consequences), Sandinista! by the Clash (three dozen curate’s eggs), Psychocandy by the Jesus and Mary Chain (feedback on the beach), Back in Black by AC/DC (the greatest heavy metal album of all time), Reckless by Bryan Adams (according to Classic Rock one of the greatest rock albums of all time, and justly so), The Nightfly by Donald Fagen (which immediately replaced Steely Dan’s Aja as the quintessential example of recording studio prowess, but with slightly less sarcasm), Let’s Dance by David Bowie (in which Bowie reinvented himself as a civilian), Thriller by Michael Jackson (an album which would become the benchmark of modern, sophisticated dance-pop, not least for Jackson himself), The Dreaming by Kate Bush (in which commercial heft underwrote studied eccentricity), Faith by George Michael (in which a teen idol grew up right before our eyes), Actually by the Pet Shop Boys (the debut album by a duo categorised in the music press as the Smiths you could dance to), Spirit of Eden by Talk Talk (described by the Guardian as “a doggedly uncommercial musical tapestry”), I’m Your Manby Leonard Cohen (in which the singer-songwriter made something of a technological handbrake turn), and Brothers in Arms by Dire Straits (if you liked that kind of thing, and lots of people did – it was the first CD to sell a million) and so on and so on.

Everything was so diverse. When the broadcaster and journalist Danny Baker was asked to make a BBC TV programme about the Eighties a few years ago, the records he chose were a mix of the expected – New Order, the Clash, Pretenders and the Smiths – and the contrary: who in their right mind would choose Motorhead, the Fall, Prefab Sprout and the surrealist poet Ivor Cutler to define the musical DNA of the Eighties/ But then why wouldn’t you.

This was a period when artists were leery of being assigned a fixed creative persona or having the success of their genre become a trap. Pop stars were inventing their reputations but savvy enough to dismantle and reinvent at a whim. Everyone and everything was mutating.

Pop in the Eighties developed like no other decade before or since, exploding during a period that had more than its own fair share of political, cultural, economic and sociological upheaval. The Eighties was a decade of political innovation – both in the mass privatisation of state-owned industries and the deregulation of financial markets – and collective economic and psychic turmoil. Britain in the Eighties wasn’t just polarised, it was ideologically divisive, with Thatcherism carving a swathe of modernism – and brutalism – through the land, especially the north. On the global stage, politics were binary, too, with Ronald Reagan’s existential boosterism creating a two-tiered USA, and the collapse of the Iron Curtain dragging eastern Europe into an uncertain future.

The soundtrack to all of this could not have been more diverse, or more varied. If up until this point pop had been fairly linear, in the Eighties it fractured with gusto. Instead of one thing continually following another, it started to atomise.

Shiny and New is out on White Rabbit Books in July. Signed copies are on presale now through Rough Trade Shops