An Unseen Student In The Congregation – Wendy Erskine 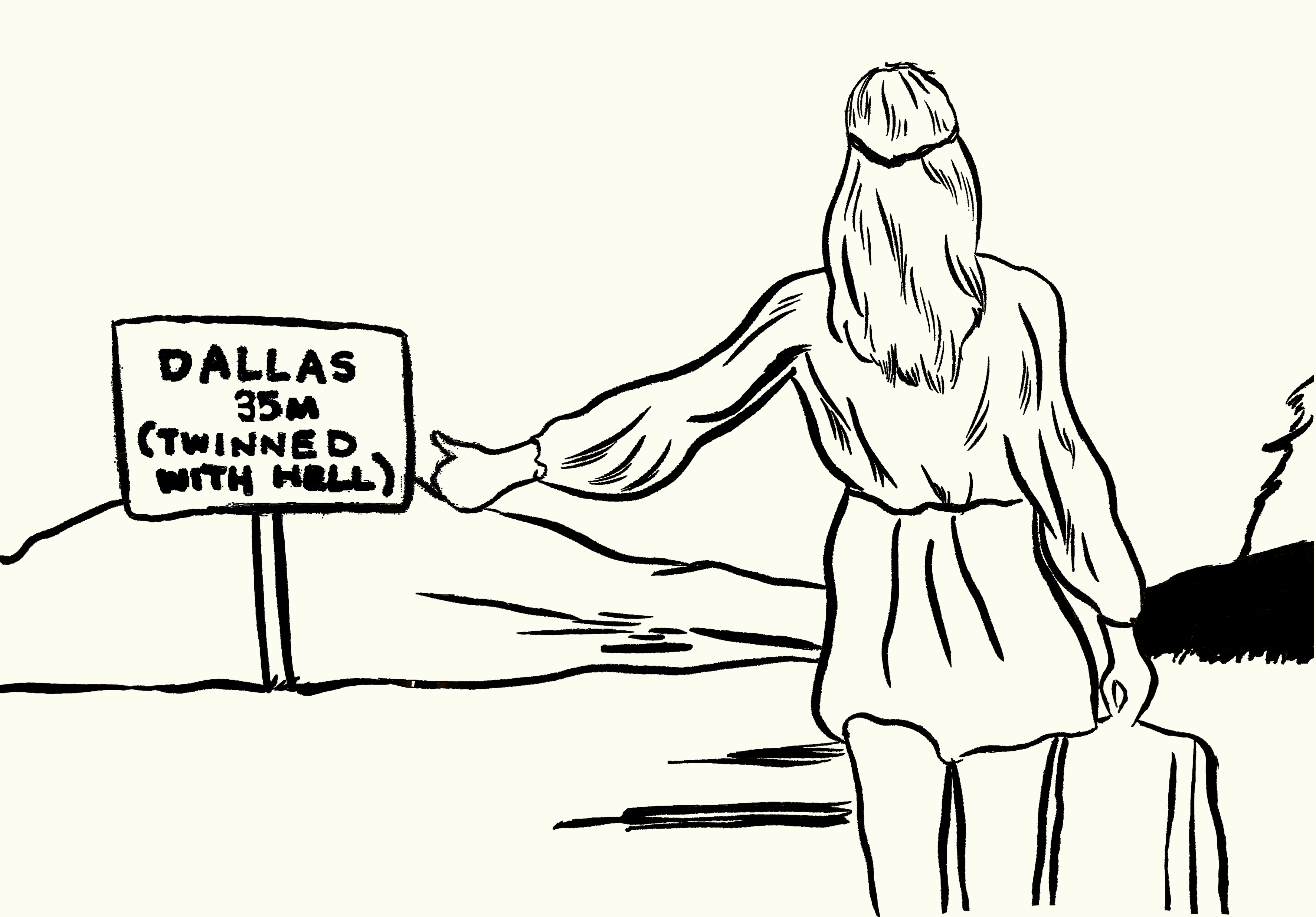 Wendine escapes to Dallas with Jerry Lee: a flash fiction homage to Nick Tosches by Wendy Erskine. With artwork by Babak Ganjei

My mamma said if you gonna lift that skirt an paint that face an run round with the unholy, then we gonna send you to a place where they will put the righteousness back into you make no mistake about that! I couldn’t a said she hadn’t told me what would happen, cos hadn’t she been a telling me that for damn near a year since I started running with that wild ol outta town crowd. So when they found me sneakin into the Herb A bar with my face done up so pretty, they screamed fit to beat Jesus an then that was the last time. You ain’t but a Jezebel, my mamma said, when you meant to be a temple of the Holy Spirit. The Holy Spirit does not wanna abide in a whore an that is the truth!

That’s why I hadda get the bus to Waxahachie, near 400 mile with only the damn leaflet about the college I was heading towards to keep me company an a woman with her squealin baby parta the way an the rest of the time a girl sobbin into her sleeve probably cos some sonofabitch gone broke her heart. I read that pamphlet about how the Southwestern Bible Institute since 1943 had embraced the standards of living and conduct of the Pentecostal churches, that the relationship between the sexes always reflected moral purity an distaste for promiscuity. There was gonna be clean conduct an conversation an modest apparel in dress an deep consecration an devotion to spiritual life. Well shit an godamn!

But then I done heard those words before plenty. We attended the Church of God in Christ, the church set up by two Mississippi missionary ladies Mother Sumrall an her daughter Leona Sumrall. There wiz pictures of them on the wall in the school, holding their Bibles, an I stuck my tongue out at Mother Sumrall an then Leona every time that teacher’s back been turned. My daddy an my mamma an my sister Clara Lynn, every Sunday we took our seats in that church an they all believed in it but I didn’t. Well Clara Lynn might not a believed either but she knew to play double. Brother Mahood did the altar call an then there was the flood of singing, sweet sometimes, like sunlight on milk, but then what came was the rush a hot sound, strange babble cos they were speaking in tongues, a flood of it so that it would torrent into your ears an dam them even if you didn’t want it. One time I heard the noise beside me an wasn’t Clara Lynn babblin like she was filled with the Holy Ghost an I thought well shit an godamn is there anyone left in the wide wide world who’s a sinner like me? But I shoulda knew. Clara Lynn was still speaking in tongues on the Monday an she was still speaking in tongues on the Tuesday an so I crept up behind her, slow an quiet, an then jumped her. Wendine you scairt me! she said. Don’t you be doin that again! An then she done realise what she said an she goes back to the babbling again. I knew anyway it was all a hokum phony cos I saw Brother Mahood, I saw that brother rolling his eyes over the swell of the women’s Sunday clothes, imagining them unbuttoned. Yeah, that I saw.

When I got to the college, there it was, a dreary ol white building with not even a flower, just a couple a grim ol trees. A girl called Dorcas showed me where I was gonna sleep, in a little bed with a box beside it, an all the beds were like that, with a bible an bible study notes resting on the little box. Those faces were scrubbed clean an I looked at the shine on Dorcas’s cheeks an said do y’all go to the town at the weekend? Well yeah we sometimes do, was what she said. So all that week during the classes—Introduction to Missions, Pentecostal Truth, Major Prophets, Exegesis of Isiah—I thought about going to Waxahachie an the bright lights an all the flashy things. But come that Saturday an when I got there with Dorcas an her two friends, it was like the town was flat out tired an bored with itself an we just sat an sipped cokes in a café run by an ol man who told me to speak more quiet when I started talking about a crazy woman that lived where I was from. She scairt me but I kinda liked her. The ol man said shoosh. I was tired a listening all the time to the girls talk about their brothers an sisters an their ol gran-mammas. An on the walk back to the Bible Institute with Dorcas an her two friends in front, I thought I’m just as lonesome as can be.

The boys at the Institute were just plain dreary an hipped on the Lord, well, that is how nearly all of them were, but there was one who played the piano in the chapel an evening an I asked Dorcas who he was, an she said that was Jerry Lee from Ferriday who wiz in the Junior Bible Division, fifteen years a age. When I saw him out one time in the grounds I said, Hey, hi Jerry Lee from Ferriday who plays the piano, are you saved? Have you come to the Lord? An he said yes indeed he had given his life to the Lord an that now he wanted to wash the stains from his flesh. But he asked did I know that Dallas was only thirty miles north on Highway 65, did I know that, an that there were plenty a cars an trucks that would give a lift? He’d slipped out at night plenty, climbed out the dorm window an gone to the picture shows an the amusement parks an the nightclubs where you could hear bands an people asked no questions. Dallas was lights an noise an thrillful pleasures. An I said, well next time you go to Dallas then you gotta take me with you. He asked me my name an I said Wendine. An Jerry Lee said, Well Wendine, I’m draggin you to hell with me. An I said, you better know boy I’m already burnin.

We went to Dallas five, six times together, slipping out, me fixin my hair, puttin on powder an paint in the back of the trucks an cars, slippin’ back in when the dawn was breakin red in the sky. We spun on the Tilt-a-Whirl at the amusement park, going crazy fast, an we went to juke joints where the music throbbed right inside me. Coupla times, he said Wendine you are a fine sight an I said that’s enough Jerry Lee cos I am too old an too wild for ya, being two an a half years his elder. An he said that don’t matter to me cos I like older women an I said, well Jerry Lee, I don’t believe that, an anyways I think that when you with a woman an you gonna come, that gun going off, you gonna shout Jerry Lee! Jerry Lee! an not her name cos that’s just how you are, an I laughed. He said that’s a dirty mouth Wendine, an I said yeah you better believe it.

Jerry Lee played at chapel service that last time, it was ‘My God is Real’, an the preacher was looking so kind at him because he made the piano sound bright an hard, but then an sweet Jesus but if it wasn’t the most thrillful thing, he started bendin it a bit on the boogie, an I didn’t well know if I was the only one noticing but then ‘My God is real for I can feel him’ had a blues yodel an it was getting quicker an quicker, a Holy Ghost boogie that thrilled my soul an I let out a happy howl an so did someone else an someone else again an then he beat that boogie with such spirit that he killed the hymn an resurrected it as love an dirt an joy. Love an dirt an joy.

Southwestern Bible Institute expelled ol Jerry Lee after that an he went back to Ferriday on the bus. An the very same night I jumped the dorm window again an headed with a bag to Highway 65, dreaming myself up, headin to the city to get a job at the Rose Ballroom where we used a go.

‘An Unseen Student In The Congregation’ is from the Summer 2020 edition of The Stinging Fly where it forms part of a specially commissioned sequence of Fan Fictions. The issue can be ordered here