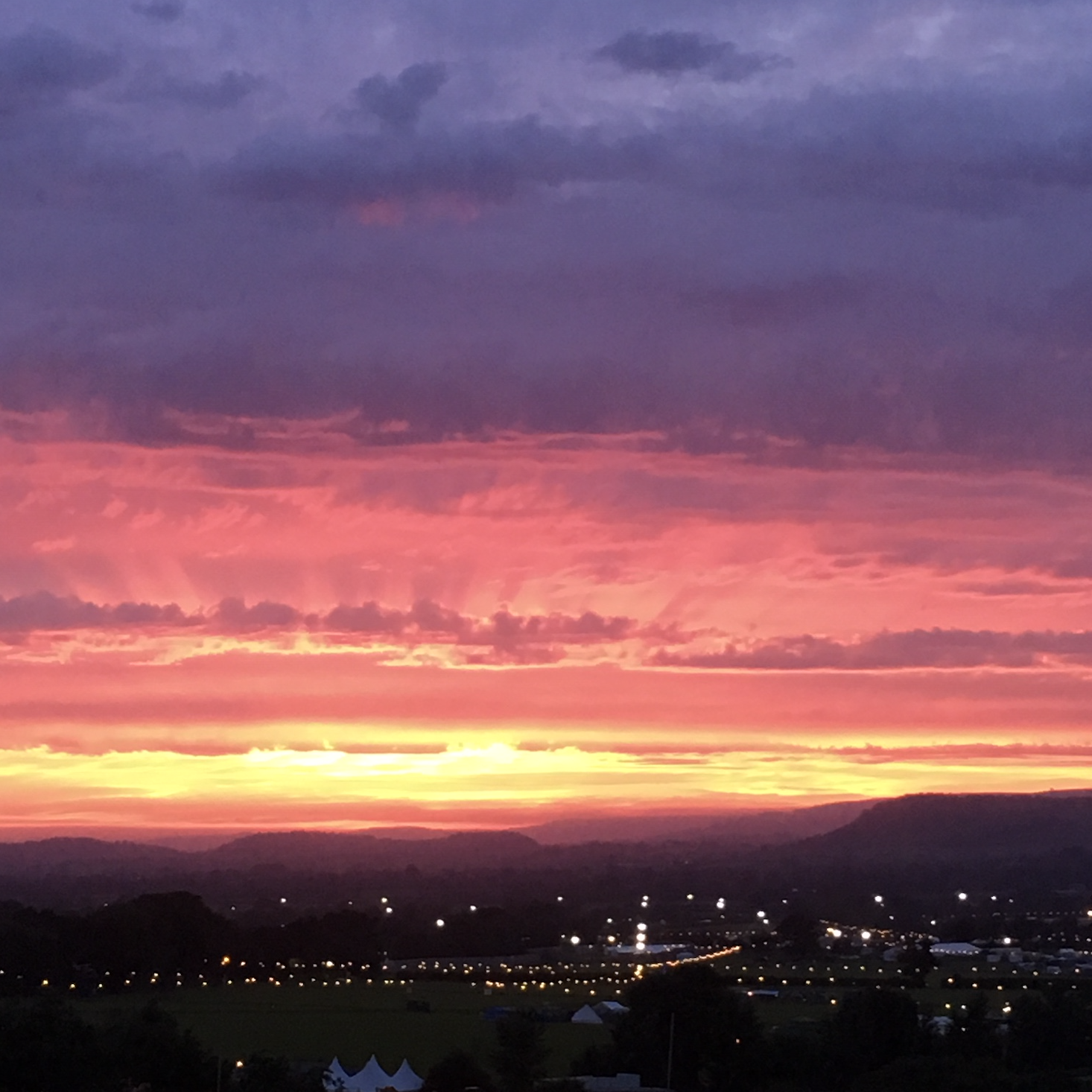 One of the staunchest people in lockdown has without doubt been Pete Fowler, not least for his 9 (!) Social Friday night drinks sessions, each with its own sublime soundtrack. Here Pete joins us for our ‘Glastonbury Week’ with some memories of his life in The Park, up on the hill . . and beyond.

On any normal festival year we’d all have been on site for at least three nights by now (we get there the Sunday before the festival opens to set up the Crow’s Nest). This year’s absence has got me thinking about so many funny – and extreme – times at Glastonbury over the years.

I totally blagged my first DJ gig at the festival in a Levis tent somewhere. It was like the Somme on shrooms and scrumpy. At any minute I was expecting the UN to fly in with resources and get everyone out there. It was back in the day when you could still get in for free and certain areas of the festival were no go if you didn’t want any trouble. That was the year when some poor guy got one of his testicles shot off.

Fast forward to the first year of the Park Field right at the very top of the festival. I was asked to make a sculpture with my freelance hell raiser friend Nigel. I was thinking what to make that would stand out and came up with the idea of a 9ft tall wooden security robot, painted matte black with a red light strip for its eyes. The idea was to have a security guard there that had no power whatsoever, so people could taunt it. Nick & Emily thought the matte black was a bit heavy so we painted it with a psychedelic livery and the festival goers drew all over it and by the end of the weekend it was covered in mud. A strong memory for me of that first year of the Park was the Sunday night where I made a nest out of straw while watching band in the rain. My legs were dry although I had lost all feeling in them due to something other than the weather.

Nick Dewey and Emily Eavis came up with the idea for the Crows Nest. Situated at the very top of the hill, it looks down over the entire festival. The idea was to have an off-radar venue to host secret gigs, talks in the day and party madness at night. Just selling tea, coffee and cakes – bring your own poison. If you can get up the hill, you’re welcome to what we used to call our home for over a week, that’s if the weather didn’t make that a feat of endurance that the lightweight Bear Grylls would sack off two mins after skidding around like a drunk AF baby Bambi.

The Crows was like a clubhouse for the rogues and rascals that we called our friends and acquaintances for the week. Quite a few people came up the hill at the start of the festival and never left. ‘Never get off the boat, absolutely goddamn right’.

My job on site was to paint decorations for the Crows Nest and DJ there on a Saturday night after the bands finished at around 1am. I’d play until one of the stage organisers Stephen Bass would show me a message on his phone saying 10 mins last tune. I remember one year nodding my head through the party haze then putting on a 12 minute version of Barry White’s Let the Music Play and then playing another few tunes after that. I never, ever wanted the dancers to leave but someone had to be up at stupid o’clock to make our tent not look like it had been the scene of a small riot. And to serve cake and teas from 10am.

As well as professional fun times up the hill, the Park Field and further reaches of the festival were our stomping ground. A good few years back I was hanging around the backstage bar, suitably relaxed and on planet love when Nick flagged me over to let me know the person who was supposed to introduce Chas & Dave on the Park Stage had gone AWOL (standard) and wondered if I’d be up for it. Of course I bloody would! About half an hour later, there was I, in a camo army helmet with the message ‘Let it happen’ scrawled on it, walking on stage to a capacity crowd hyped up for the cockney juggernaut to light up the afternoon.

I’d managed to get so many puns and cheap laughs into the introduction. Everyone was so up for it, scores of nutted people with knotted hankies on their heads gurning like dogs with wasps in their mouths, all ready for ‘Rabbit’, ‘Gertcha’, ‘Ain’t No Pleasing You’ and other assorted East End bangerz. My crowning glory was getting the crowd to scream for the word ‘and’ from Chas and Dave. I remember little else after that.

I could go on and on with other stories, like that time we had Brian Cox in conversation with Shaun Keaveny at the Crows and got invaded by hordes of rabid science mums who later tried to climb the 8 foot tall perimeter fence that surrounded the back stage area. I can’t remember which zombie film it reminded me of but it definitely put a few grey hairs on our collective heads.

That and being booked to DJ at 6.30 at the back stage bar Maceo’s just next to the legendary Block 9. I’d read the email as 6.30pm but the day before the gig I’d realised it was 6.30am. Ok. What do you do, stay up all night and go straight there or have an early night and wake up early to walk the hour it took you to get there from our hill? I decided on a combination of both. Partying hard then going to sleep fully clothed about 3 hours before the set. Woke up with about 30 mins to get there, fully nutted, jogging past party people and shouting to anyone who would listen ‘AM I GOING THE RIGHT WAY TO MACEO’S?’ I got there with about five mins to spare and realised I was DJing in a shipping container to about 40 half naked gay men. Perfect scenario. Fast forward to lunchtime and realised I was hanging out with some loons waaaay over the other side of the festival and had acquired an extra pair of sunglasses. Thinking I could creep back in to our camping area unnoticed didn’t go as plan as Nigel loudly announced ‘Attention everybody, Mr Pete Fowler on drugs!’

Can’t wait for next year.