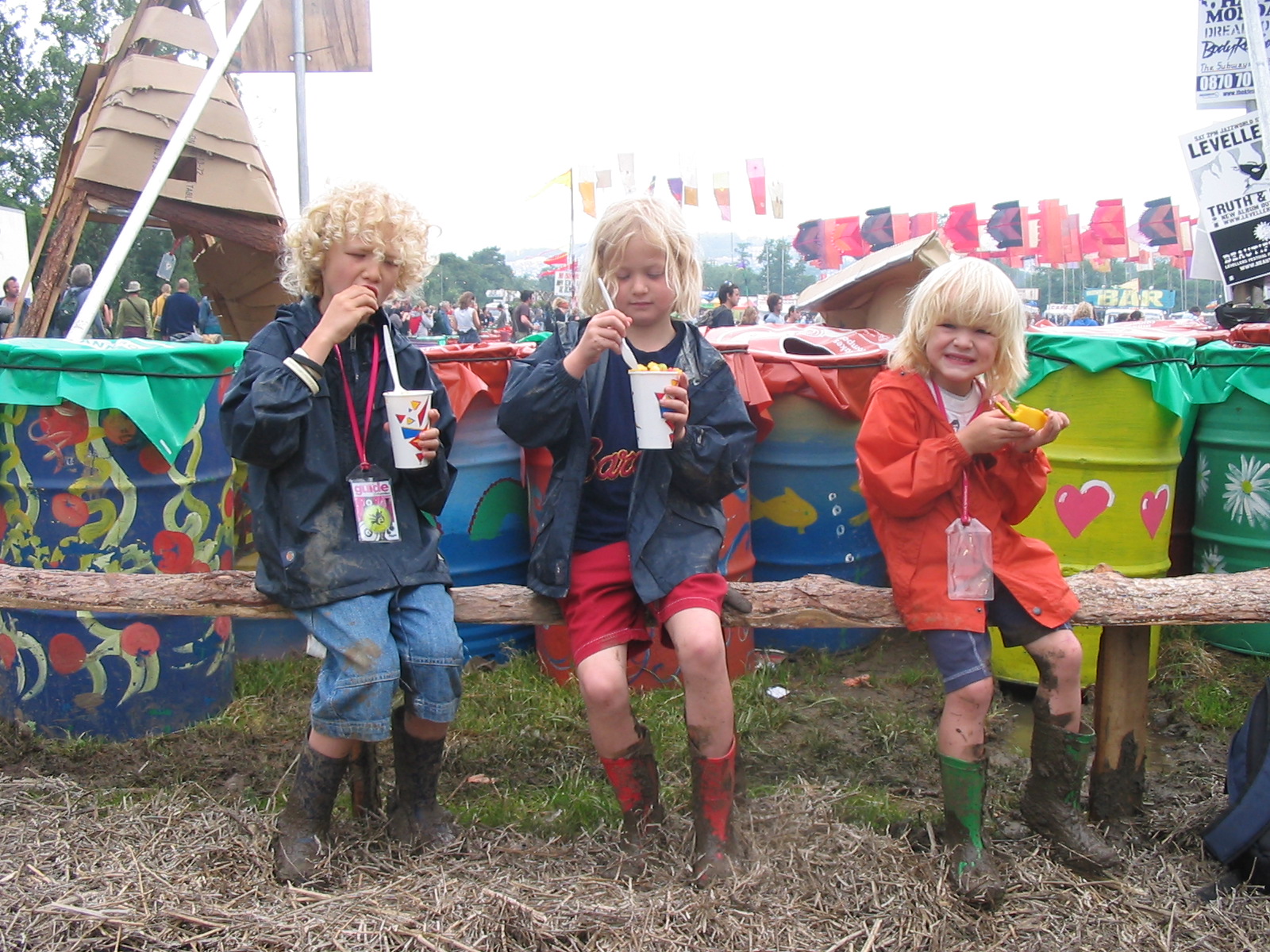 Between 1985 and 2003 I went to Glastonbury loads of times. Some weekends I remember like it was yesterday; others I have no memory of at all. I went with my wife, friends, various bands and I always had the best of times. I was free to do whatever I wanted to do without any responsibility. For me, that was the way to do it. It was like being in heaven for five days every year. In 2004, my wife and I decided to take our three kids. Why? I can’t quite recall why we thought it was a good idea but do it we did. Travis was 8, Olive 6 and Webster was 4 even though he reckons he was 3.

It rained and we had the best weekend ever. I’d never seen the kids happier and as the weekend went on we all realised that this was it. This was our thing. Glastonbury would be our Christmas and all our birthdays rolled into one. We’ve been going as a family ever since and we have bags of memories. The kids buying plastic bling off Banksy as he parked his ice cream van in The Park. Travis going down to the Pyramid Stage five hours before Beyoncé’s set just to get a good spot and then us all having to sit though looking at the 120 photographs of her on his phone at 2 in the morning. Webster going missing for three hours when he was about 5 – he turned up fit as a fiddle and proceeded to tell us how he really fancied some candy floss and managed to find some near the Jazz stage. Olive loving her hot chocolate in the Green Fields. ‘Tiny’ Travis performing on stage for hip Hop Karaoke… I could go on but you get the picture.

You know there’s always someone special in your life when you’re a kid, someone who’s not your Mum and Dad but has a big influence on you. Maybe an aunt, a grandparent or a family friend? The biggest influence on my kids’ lives after me and their Mum is The Glastonbury Festival. I couldn’t be happier.

I first went to Glastonbury when I was three. It was a very unfair festival to start on as even at that age I realised my festival experience had peaked. I do think back to my early years of Glastonbury and wonder how my parents dragged three young kids around a festival especially those mid ’00s years when we were all drowning in mud. But they did and I’d like to think I’d do the same because those first years were undoubtedly my best Glastonbury’s and hold some of my fondest memories.

It’s not even like I remember loads of music. That being said, Jay Z in 2008 will forever be imprinted on my mind. For me, it was simply being at Glastonbury that I looked forward to all year. Walking around the fields and seeing all the “festival people” you only see once or twice a year. I do think that’s why Glasto is great – the people. Some are pretty mental, but in the best way, and it did take me a while to understand why everyone was quite so happy and loving over the weekend particularly in the evenings.

For me, sitting round a tent feeling too cold, with a cider too warm, listening to the bang of the Rabbit Hole or some other late night spot in the background is what it’s all about. There’s nowhere else I’d rather be.