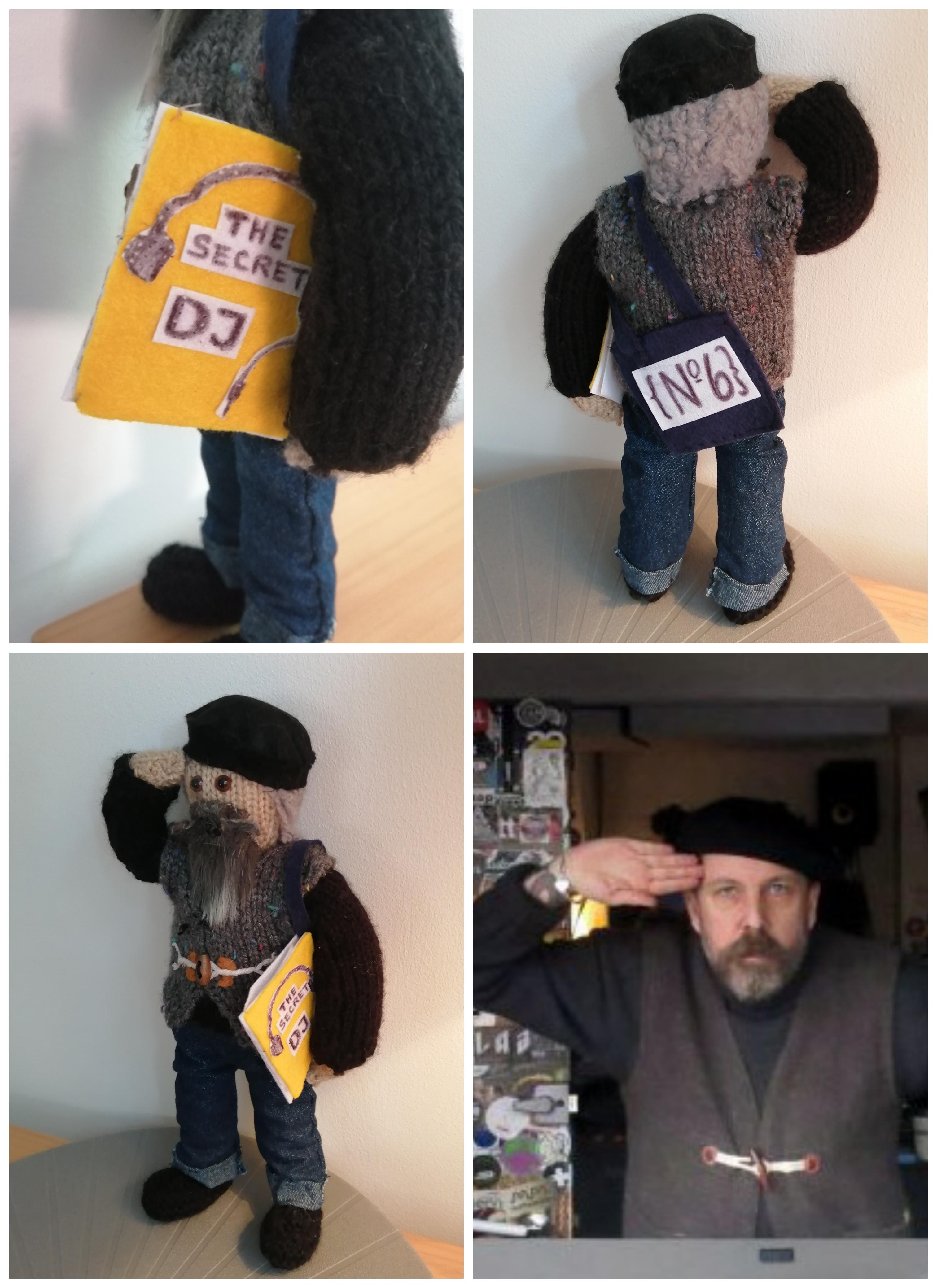 We have covered the premature death of Andrew Weatherall age 56 from many angles in these pages over the past three months. The shock and sadness, but also the affection and respect for a man of astonishing creative integrity, has been the bass leitmotif of lockdown; a constant reminder we’ve lost a man who created and connected worlds for so many of us. In the weeks immediately following Lockdown, the 900 hours of the ‘Weatherdrive’ landed. Like bookends, as Lockdown started to ease at the end of May, we came across the ‘Weatherdolls’. With the help of The Flightpath Estate, the Heads behind the Weatherdrive, we tracked down Claire Smith who knitted the dolls and auctioned them daily last week for charity.  On Sunday evening the final Weatherdoll found its adopted home. Collectively the dolls and their creator and her collaborators had earned £6,463 for MS Trust: 6.04.63: Andrew’s birthday.

There’s something remarkably hopeful and poignant about the Weatherdolls; the act of knitting them itself is enough but when you observe the details (the familiarity of the clothes, the Hobnobs, the copy of The Secret DJ etc) they take on a magical significance. Andrew loved folk-art and he loved his friends. The Weatherdolls are incredibly moving and the story around their creation and subsequent auction is so captivating because it shows the resourcefulness of the human spirit and friendship through pain, loss and adversity. Which is something we all need reminding of in these bleak midsummer days. Thank you, Claire Smith.  I’m pricked by melancholy when I think these dolls, like puppies sent off to their respective owners, will never get to hang together again; just as we’ll miss those regular communions on the dancefloor. But each of these dolls is a little occult signifier. And wherever they are, they’ll vibrate with that energy forever. Just as Andrew’s spirit and music will live on every day for thousands of us who experienced his unique qualities as a human being.

What was your relationship with Andrew?

Andrew was my older brother’s best friend. We met in 1982/3 when I was 17 or 18. We were a tight knit group of friends who used to flit between the Adam & Eve in Windsor, Jacksons in Staines and various other clubs of the time. We spent roughly 4yrs together ‘on’ and ‘off’ getting ourselves in and out of trouble. We were a close group of like-minded people. Andrew had me typing out the first draft of the ‘Boy’s Own Fanzine’ on my petite typewriter, things were never dull.

How and when did this idea occur to you?

I can knit and had already made some knitted caricatures of my friends. I always planned to create an Andrew, once I had made one I realised how cathartic it was helping me with my grief. Looking through old and new photos and talking to Simon (my brother) about misspent youth, good and bad. Knitting helps me concentrate my mind and helps calm me as I suffer from epilepsy. Over a considerable amount of time they became the ‘Consolamentum of Weatherdolls’. Then we had the idea of how we could cheer people up through lock down and raise money for one of Andrew’s chosen charities with the families blessing.

Can you describe the process of making the dolls? Did you follow a pattern?

My nan and mum taught me to knit at an early age. I do not work from patterns. It’s all in my head, bits and pieces remembered from old discarded patterns over the years.

How did you make the sartorial selection? It looks like the Weatherdolls represent different periods & styles of the great man

I found it interesting looking through the ‘NTS’ booth photos and other pictures of Andrew and was reminded of what an array of different styles he had and thought it would be fun to replicate in doll form.

Tell us what you are now doing with the dolls.

People have such a strong connection to Andrew; he has really influenced a generation. I knew they were suffering also with lock down. So I thought we could create something that would help us remember him, be fun and raise money for MS charities. It has turned out to be an emotional experience with friends and the family bidding & pulling together.

As the friend and character that he was, a significant part of my growing up and part of my family. He made me listen to John Peel, watch old comedy sketches, search out interesting books and helped me think outside the box.

What do you think Andrew would have made of the Weatherdolls?

I thought about hanging up my ‘needles’ in the early stages because of a negative and very upsetting remark via social media. These creations have been challenging for me to make, I’m so glad I persevered. Andrew was creative and I know he would have approved as have the family. At the end of the day we have raised shed-loads of money for MS. I simply could not have physically and mentally dealt with this process without the substantial contribution from my partner Simon Rule.