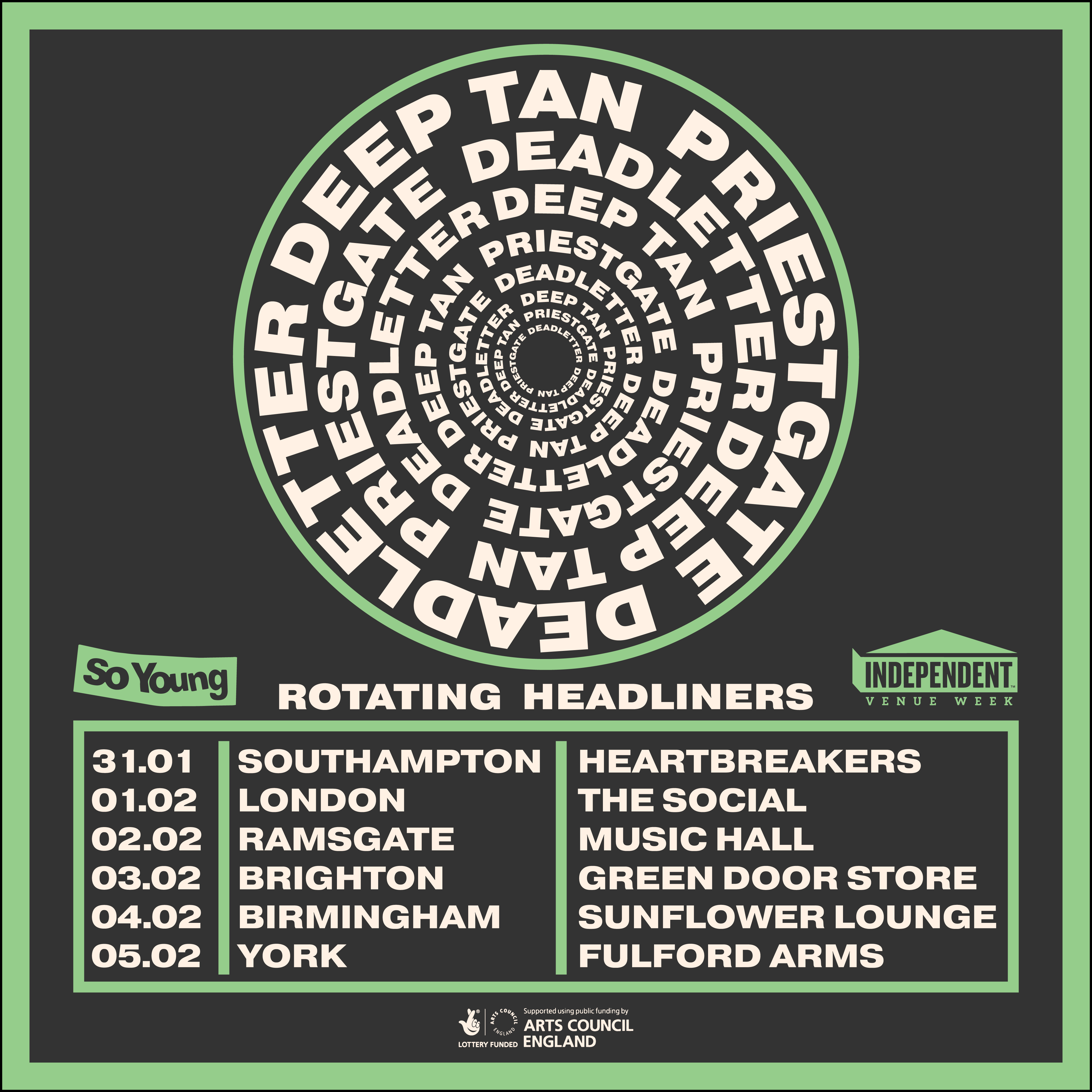 TICKETS
–
Independent Venue Week and So Young team up to bring you three of the buzziest new bands from the UK underground scene in deep tan, DEADLETTER and Priestgate. Though very much part of a new wave of post-punk acts, all three hark back – being both musically and visually reminiscent of 70’s and 80’s acts such as The Cure, The Slits, Gang of Four and Bauhaus. They’ll bring their dark and frenetic live shows to Independent Venues in Southampton, London, Ramsgate, Brighton, Birmingham, and finish with an all-dayer in York on Saturday 5th February.
DEADLETTER
First off, hailing from Yorkshire, now South London rooted, DEADLETTER channel the droll fury of The Fall and the lopsided rhythms of LCD Soundsystem into a strain of vehement post-punk, exploring the darker side of existence through a lens of narrative-driven levity. With members being firm friends from birth, there is an instinctive understanding of movement and danceability to their music worth its’ weight in gold, whilst never cheapening the nuance and grit of their sound.. With four singles now under their belt, the only way is upwards for DEADLETTER.
deep tan
Also part of London’s thriving post-punk scene, deep tan make music that emerges from the fatalistic side of life with a flash of cynicism and a rumble of venomous intent. Simultaneously bitingly focussed and deadpan-apathetic, theirs is a distinctly modern take on the genre, with the band’s stripped-back, minimal sound engaging mostly with contemporary themes, from deepfake revenge pornography to surreal meme pages and stories of furry hedonism.
PRIESTGATE
And finally, raised in the sleepy town of Driffield in East Yorkshire, Priestgate formed as a battle-cry against the restlessness and mundanity of rural life, and began as a reaction to the sparse local music scene around them, which in turn has allowed them to craft and develop their own unique sound without the added pressure of conformity. Drawing comparisons to The Cure and The Maccabees, Priestgate have combined bright guitar-pop hooks with darker lyrical sensibilities, concocting their own angst-laden blend of the hypnotic and euphoric.
IVW
Independent Venue Week will take place from Monday 25 January to Sunday 31 January 2021. 2022’s official ambassadors include Wet Leg, Joesef representing Scotland, Mace The Great for Wales, and SOAK will representing Northern Ireland.
So far this year, 121 venues from 66 different villages, towns and cities have signed up to take part, 89% of which are outside of London with more to be announced over the coming weeks. Over 30 venues from Wales have applied to take part in Independent Venue Week’s 2022 edition. This is the highest number of Welsh’s venues involved since the start of IVW.
Details of shows, tours and ticket links are available on the Independent Venue Week website: www.independentvenueweek.com