Everything At Once – Joshua Idehen 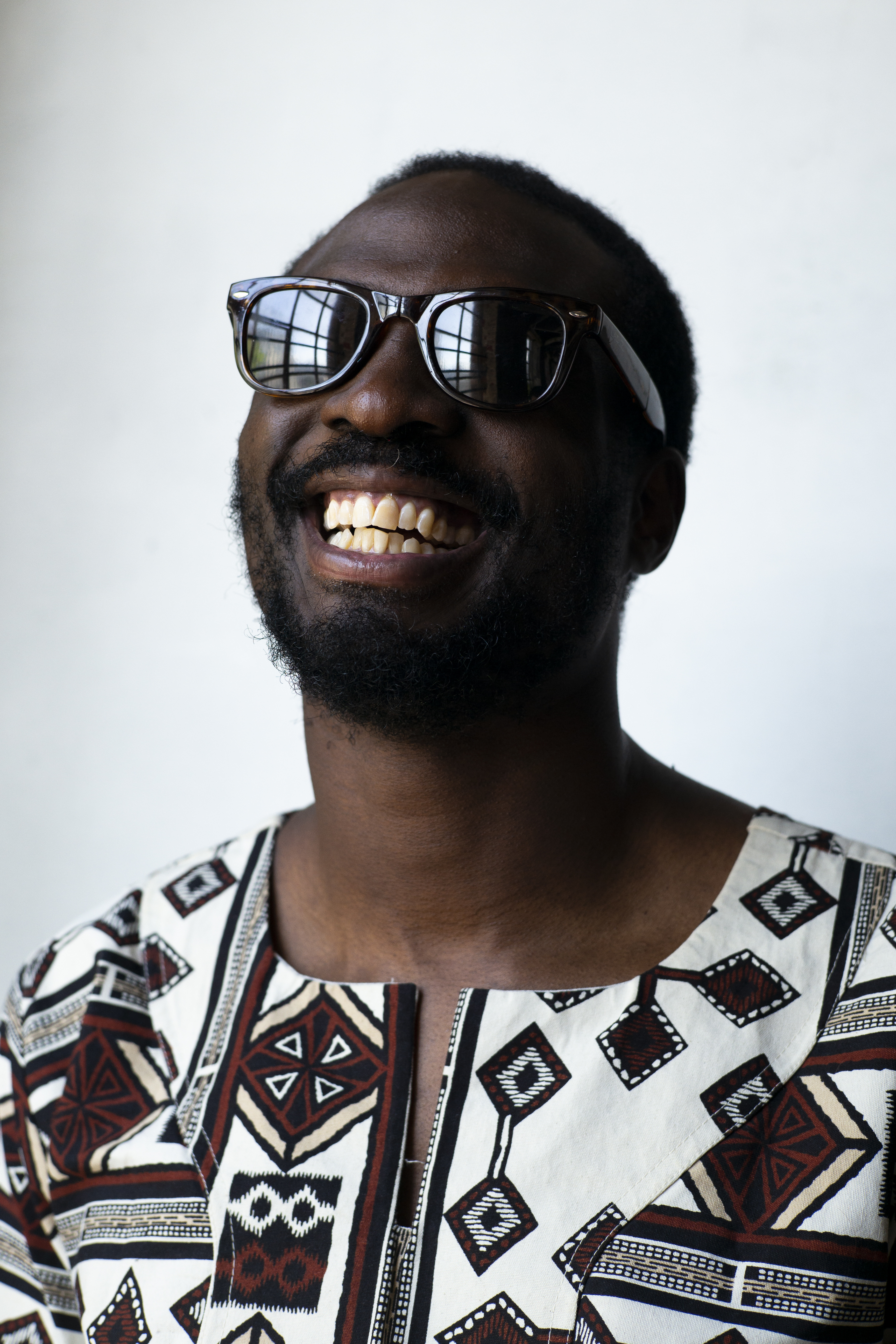 You’re in a band, dance pop trio Benin City, based in London. You imagine yourself as Roisin Murphy and Hot Chip discussing politics at the Paper Dress Vintage, just off Mare Street, Hackney, plus the occasional saxophone solo. In 2020, you have a new indie label, a new booking agent, a tour of Italy lined up, and a release schedule plan to push out some really, really wonderful new songs. You start in March. It’s gonna be a good year.

You’re in a band, Alt R&B/Pop duo Hugh, based in London. You describe yourself as pop to your black friends, and Alt R&B to everyone else. This is called Marketing.  In 2020, you have a new indie label, some really, really wonderful songs you can’t wait to show off to the world, and a release schedule that doesn’t conflict with your other band’s – Benin City’s –  releases. There’s enough space in the year for both, you say. You’ve planned this well. You start at the end of May. It’s gonna be a good year.

You’re in a band, six piece Jazz/left-field electronic outfit Calabashed, with Alabaster De Plume, who you’d describe as Sufjan Stevens in London via Manchester. Calabashed has Maria Osuchowska on harp. Harp. Haaaaaaaarp. How many Nigerians you know working with harp. Rhetorical question. Schedule is tight but you got an indie label, they know what they’re doing. You even snatched a show at the Southbank and no one’s heard the music yet (booking agents are legit witchcraft when they’re good). You’re squeezing the first single in for end of April. It’s gonna be a good year.

You make guest appearances on singles with other, larger artists, some releasing in 2020. Your email is a spaghetti of threads, with your band labels and your collaborators’ labels jostling for calendar dates. You’re told you have to give eight weeks between single releases because -apparently – your audience, the gatekeepers and their audiences will spontaneously combust if one week you’re a goth demon and the next you’re a techno wizard. Who do you think you are, David Bowie? (even he waited a whole album before switching personas, so maybe you’re overdoing it a bit, yeah) And it’s not like you have the whole fifty two weeks of the year to play with, either: no one but major label artists, the popular and The Very Mad drop anything in January, and December is for Christmas singles, majors and, again, The Very Mad. No one wants to drop in June/July, are you mad? Those are dead months: almost every music journo and his mum’s cat are at Glasto, every band should be on tour and/or bragging about how their forthcoming tour will cure dry skin, plus the Olympics is gonna be all over the gaff. Dead months, them months. Brexit’s there in the background, who knows how we’re gonna tour Europe when Freedom of Movement is finally in the bin* and UK artists has to pay for visas to travel to each individual EU country but EU citizens have to pay for one. Thanks, Brexit. But we’re all sure something’ll work out; tories are not that dumb. And don’t forget the US Election: sure, you’re in the UK, but the dilemma in The States is a meteor and we’re all dinosaurs hoping this incoming rock flames out in the earth’s atmosphere and send us into a literal and metaphorical ice age. You can release at least one song in November if everyone is heaving some sigh of relief. You’re secretly saving a November slot for your solo project. Sorry, You should have mentioned: you’re in a solo project.

It’s all a bit mad, but you have it all sorted. Everyone’s on board and the schedule is tight. It’s gonna be a good, busy year. Even with all that mayhem going on in, what is that place called, Wuhan? Where’s that? China? Lol, another virus. Swine, birds, this new one’s a bat, apparently. What’s the next one gonna be, tuna? Hahaha #worldnewsproblems.

Except, except, in March, your italian promoter emails. That whole lockdown thing in Italy is – for real for real for real – very very bad and not only for a week, tops. Benin City gigs disappear like black Kanye West fans, let’s reschedule for May, we say. Your new single release is also pushed back til May. Rejuggling needed. Annoying, but only a slight sna-

The UK goes into lockdown, also forrealforrealforreal. We’re saying end of March, maybe April but people are whispering end of May. Calabashed can’t release now; no one is releasing now. People are hoarding toilet paper and keeping grave distances between each other, who the hell wants to hear new jazz at a time like this? Push that boulder back to, I dunno, June, we’ll just have to move thi-

My producer and colleague in Hugh is stuck in New York because Trump just banned all flights, not just muh muslims. Our lead single isn’t finished, we’ll have to work remotely. Calendar’s properly nuked, even the great Olympics/Glasto apocalypse has been delayed. Let’s just sit tight til Covid dies down. Go write some poems. Exercise. Start a podcast. Catch up on your Netflix backlog. The world will be back in summer.

Come the morning of June, Lockdown has not driven you “proper” nuts just yet, but it has made you, even you, Mr I’m-In-Several-Bands-So-I-Dont-Have-Time-For-Other-Humans, lonely. You’re sure other people feel the same, so you put out a surprise single, with Benin City, called Hold Them Close. Calendar is clear, no conflicts. PR is DIY, so you Whatsapp all your mates, DM everyone who’s ever engaged you on platforms, get the word out. Hustle. Cool.

George Floyd was murdered. You have to say something. Yeah you got a Benin City track about UK’s treatment of black people, Hostiles.

Hold on, didn’t you just put out a track two week’s ago. What about eight-week release-

Excuse me, you said, George Floyd was murdered, you have to say something. Charity track, all proceeds to the cause thing. PR is DIY, so you Whatsapp all your mates, DM everyone who’s ever engaged you on platforms, get the word out. Hustle. Cool.

Except, except, you had a whole release schedule plan with Hold Them Close, remixes were meant to follow. Remixes that your more popular artist mates did for free with the understanding you all could cross pollinate/promote and generate exposure/relevance/PR for each other around the original single’. So you have to put it out. Honor agreement. You have to. Week three. PR is DIY, so you Whatsapp all your mates, DM everyone who’s ever engaged you on platforms, get the word out. Hustle. Cool.

Except, except, you already pushed back the Hugh release a few times by this point, and the indie label are saying now for they genuinely don’t know when they can release the record at all if not “end of June”. Covid is latin for chaos, or it should be. Nobody knows. Now’s as good a time as any, Countries are kind of reopening, but who knows for how long, and when Boris or Cummings will get a new girlfriend and start a chain of events leading to another lockdown. Eight-week gap be damned, drop it last week in June. PR is kinda DIY, so you Whatsapp all your mates, DM everyone who’s ever engaged you on platforms, get the word out. Hustle. Cool.

And it’s the same with forthcoming release with Calabashed, and a several other feature tracks, all expecting some level of promotion for your collaborative art, coming out on all platforms. Your non-music mates no longer respond, sometimes the message doesn’t even read as “read” anymore. Your legit fans don’t wanna hear from you at this point, it seems. You think everyone is tired of you. Yeah, the work is great but everyone is tired of you, busy with their own tense journey through these scary-in-new-ways times, one twenty-seconds-washing-palms session at a time. No one has any idea what is a good idea. You and your cohorts don’t have the money or  networks to push any of these releases to greater exposure whether or not you hold your music back. You don’t know what kind of world will exist after Covid. Can you afford to be silent? Shrug Emoji in Black. You’re looking back on all your releases and their paltry play counts on Spotify and you’re not sure this was or is a good idea. Maybe it is and you’re just not good enough an artist. Gotta consider it. Maybe that eight-week window isn’t a bad idea and everyone’s heads have actually exploded.

Except, except, you’re still releasing. You have more songs due in August, and September. And now’s as good a time as any to share with the world. Admit it, you like keeping busy. At least you’re keeping busy. You’re in bands, plural, and everything is out now, on all platforms, all at once. It’s gonna be a good year.