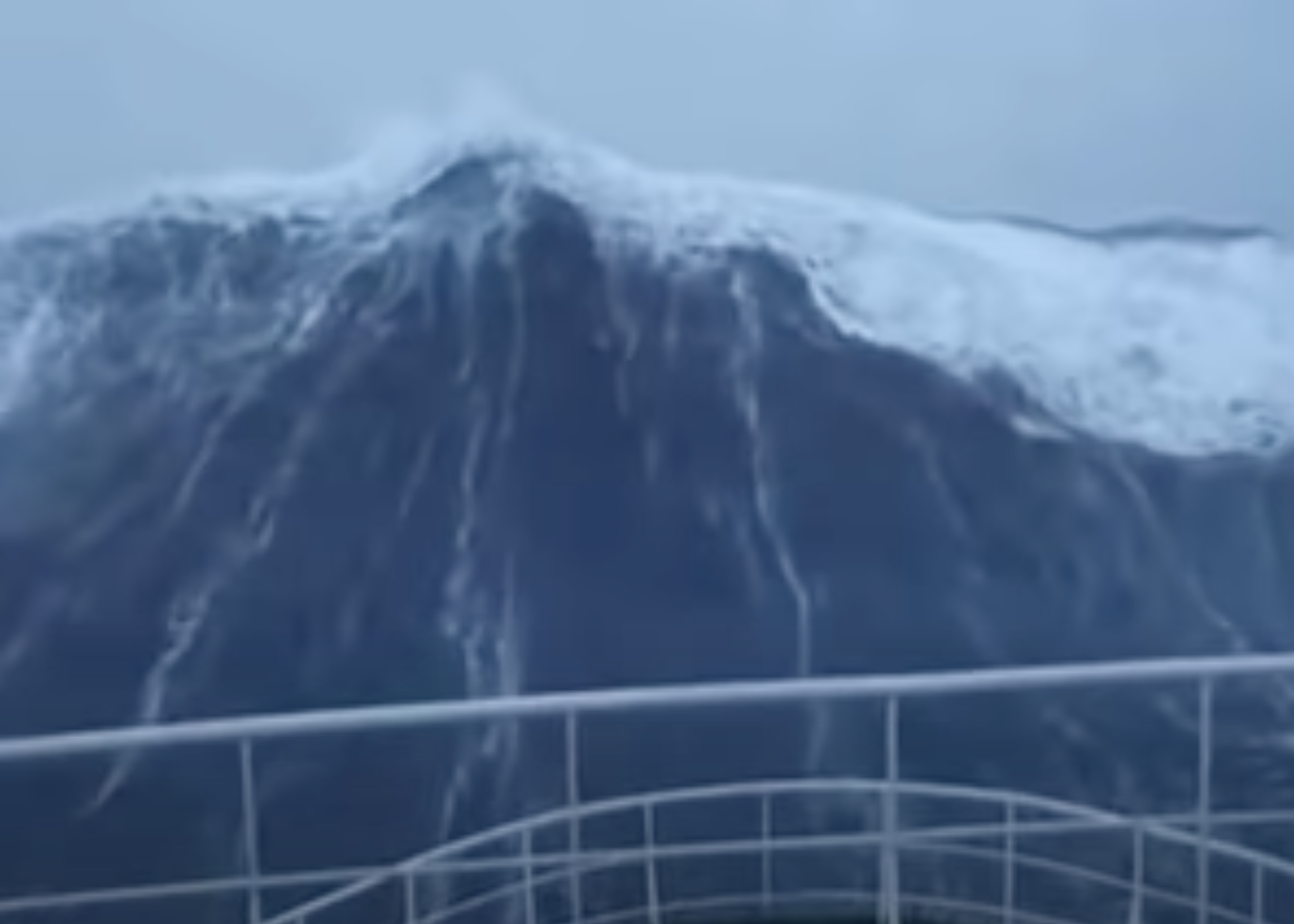 When you write a book about foghorns you end up in strange and unexpected places.

The last entry in the logbook at the Flannan Isles Lighthouse was the morning weather readings on 15th December 1900. When the relief boat turned up on the 26th December, there was nobody to greet them, and no sign of anyone around. The beds were made, the light was ready to be lit, but the clocks were stopped and the fire unlit. The three keepers, James Ducat, Thomas Marshall, and Donald McArthur, had vanished, one of them in just his shirtsleeves.

“After a careful examination of the place, the railings, ropes etc, and weighing all the evidence which I could secure, I am of the opinion that the most likely explanation of the disappearance of the three men is that they all had gone down on the afternoon of Saturday 15th December to the proximity of the west landing, to secure the box with the mooring ropes etc. and that an unexpectedly large roller had come up on the island, and a large body of water going up higher than where they were and coming down upon them had swept them away with resistless force”

This ‘unexpectedly large roller’ with ‘resistless force’ may have been what we now call a rogue wave, or freak wave. In 1901 when the keepers disappeared rogue waves did not officially exist, at least according to science. According to the National Oceanic and Atmospheric Administration, rogue waves are “…greater than twice the size of surrounding waves, are very unpredictable, and often come unexpectedly from directions other than prevailing wind and waves.”

A rogue wave is defined by its size in comparison to the waves around it, but also its force and power. It’s all about the significant wave height – the mean wave height at the moment it strikes. While that may have been what swept away the keepers at the Flannan Isles, it was almost a century until one to be recorded and for the existence of these towering walls of water to be proven. On the Draupner oil platform off the coast of Norway on New Year’s Day 1995 – in an area with significant wave height of approximately 12 metres (39 ft) – a wave with a maximum wave height of 25.6 metres (84 ft) occurred. The Draupner Wave confirmed the existence of rogue waves and also triggered research into the conditions of their creation and prediction.

The existence of rogue waves did nothing short of making a maritime imaginary a real and proven scientific reality. Rogue waves have always existed in folklore, in myth, in maritime stories, that permeate popular culture. They’re there in The Odyssey:

“…Poseidon, shaker of the earth, drove on a great wave, that was terrible and rough, and it curled over and broke down upon him, and scatters it abroad in every direction” (Odyssey, Book 5)

And in Irish folkore as documented by Jennifer Westwood:

“In Irish folklore there is a wave known as The Wave Of Toim, one of the four ‘great waves’ that in early Irish literature were said to roar at the death of a true king”, in one story the wave cut away the rear of someone’s horse as they galloped away.  A version of the legend in the nineteenth century talked of an ‘avenging wave’ that rushed along ‘crested with lightnings’

Shackleton experiences what sounds like a rogue wave in a terrifying segment of South:

“I suddenly noticed a line of clear sky between the south and southwest. I called to the other men that the sky was clearing, and then a moment later I realized that what I had seen was not a rift in the clouds but the white crest of an enormous wave. During twenty-six years’ experience of the ocean in all its moods I had not encountered a wave so gigantic. It was a mighty upheaval of the ocean, a thing quite apart from the big white-capped seas that had been our tireless enemies for many days.”

Shackleton’s description is magnetically terrifying – the world inverted and the sky made sea, the snap realization that your eyes are deceiving you and you are about to be set upon by the power of earthly oceanic forces, focused into a wrecking ball made of water. The power of rogue waves is part of their definition – they are jaws, they act upon entire cargo vessels as a great white shark does on a swimmer’s limb.

They are sometimes described not as that which has height but, as what might appear to be holes in the ocean – steep sided with dramatic troughs. The NOAA states that “most reports of extreme storm waves say they look like ‘walls of water’. They are often steep-sided with unusually deep troughs”. “It looked as if we were going into the White Cliffs of Dover,” said Captain Ronald Warwick, master of the Queen Elizabeth II, who encountered a rogue wave in the North Atlantic, in February 1995.

In Susan Casey’s The Wave, where she details the occurrence of rogue waves and the quest to surf a 100-footer, she writes that “according to the basic physics of ocean waves, the conditions that would produce a hundred footer were so far beyond rare as to virtually never happen. Anyone who claimed to have seen one, therefore, was engaging in nautical tall tales or outright lies”. In Rachel Carson’s The Sea Around Us, written in the post war period when wave measurement and study was just being developed, she writes “a long series of reports culled from the publications of engineers and ship’s officers show that waves higher than 25 feet from trough to crest are rare in all oceans,” but that “the greatest possible height of storm waves at sea is a much debated question, with most textbooks citing a conservative 60 ft and mariners stubbornly describing much higher waves”.

What I latched on to was Carson’s stubborn mariners – that textbooks cited 60 feet as the highest possible storm waves, but mariners insisted they could be higher. It was a gap, between science and experience. Was the maritime imagination getting carried away, or was there something wrong with the numbers?

The problem was, apparently, between the application of linear and nonlinear equations – the Draupner Wave confirmed to those working on such mind-bending aquatic maths, that what was required was the application of something called the ‘nonlinear Schrödinger equation’ – which takes rogue waves into the realm of quantum mechanics and theoretical physics, and which no amount of layman’s terms will be able to effectively communicate here.

In the time between Rachel Carson and me, rogue waves have come out of the shadows – while human observers can watch only fragments of water, satellites found that in the vastness of the oceans, rogue waves were more common than ever anticipated. In 2000, a European project called MaxWave was set up to identify rogue waves, using data from European Space Agency satellites and other sources to do an extreme wave census. Just three weeks of data identified more than ten individual giant waves more than 25 meters (81 feet) in height. A newswire from the ESA reporting on the findings stated that previous to this, scientists had held that such massive deviations from the surrounding sea state would occur roughly only once every 10,000 years. It also mentioned other recordings of rogue waves, such as the radar data from The North Sea’s Goma oilfield which clocked 466 extreme waves in 12 years.

Proof that rogue waves existed at much higher frequencies than ever anticipated made maritime folklore real; made myths real; made what seemed exaggerated not just possible, but a real and regular occurrence. The play between science and storytelling, between data and experience was deeply compelling because it gave life to the unknown. They give a possible reason for ships sunk by mysteriously strong forces, explains how their hulls have been torn apart, how – in one case –the wreckage indicates that lifeboats that would usually have been hoisted 84 feet above sea level could be torn clean from their bolts. Norwegian tanker the Wilstar had its hull torn away by a rogue wave in 1974; a 70ft wave crashed down on the cruise ship Norwegian Dawn in April 2005, in average waves of 25-30ft. Rogue waves are also one of the more likely theories for the capacity of The Bermuda Triangle to disappear vessels: they come out of nowhere, mountains materialising infront of your eyes, and leave little time to get a Mayday message out.

While there aren’t any definitive rogue waves on YouTube, you can get close enough. There are swathes of footage made by sailors on container ships and tankers encountering mountainous waves and biblical storms, where wave peaks reveal ‘holes in the ocean’ below. Whether these are huge waves or qualify as rogue waves depends on measuring the height in relation to the waves around it – something very few would be able to do when faced with the rearing up of the world itself in your wheelhouse window, like this:

Lighthouses have often been struck by massive waves, sometimes in storms, sometimes in calm weather. Bella Bathhurst found that many of the last generation of keepers “testify to alarming encounters with freak waves”. Fastnet lighthouse in Ireland was struck by a 154 footer in 1985. Accounts in the oral histories conducted as part of the renovations of Sumburgh Head include a keeper called Tommy Eunson describing sea spray inside the lighthouse tower, roughly 250 feet above sea level. On 11th March 1861 at midday at Eagle Island, “the light room of the East tower was struck by the sea smashing 23 panes, washing some of the lamps down the stairs, and damaging the reflectors with broken glass beyond repair. It must have been an incredible wave to have come up 133 feet of rock and then a further 87 feet of lighthouse tower to cause so much damage.”

It is incredible to me that physics and science insisted these waves weren’t possible – that sailors were exaggerating, that keepers were telling tall tales, and that the stats for one occurring were about one every 10,000 years. But the Draupner wave revealed a gap, which folklore and lived experience filled. It means that there have probably been many more encounters with rogue waves than previously thought, and that hundreds of accounts might be lying disregarded and unnoticed in ship’s logs and lighthouse keeper’s record books. Most are not digitized and so there’s no easy way to find them, nor is there an easy way to judge whether one awesome and terrifying wave is massive or rogue. What we do know, is that more rogue waves than we ever imagined rear up without a witness. So massive are the oceans and so few are we upon the waves, that the seas can be momentarily transformed into mountains, and not one of us will know.