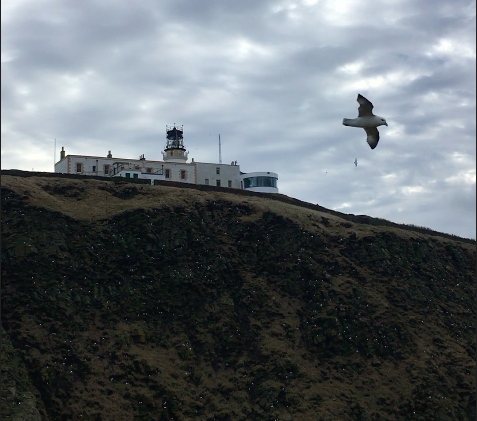 When you write a book about foghorns you end up in strange and unexpected places.

Accounts of animal and bird life at lighthouse stations are often dream-like or nightmarish. A  lighthouse is a solid, unmoving structure built to improve safety at sea for humans. It is also an accidental observation tower, a solid stone structure in which keepers could be still and watch the movements of other species. Some lighthouse keepers immersed themselves in their environments more than others, recording animals being drawn to the light in hazy twilights, tussling with grouchy seals for space on the rocks at low tide, or encountering a mischief of rats.

Birds flying en masse into a lighthouse beam is known in the lighthouse service as a bird strike, and is one of the reasons the Scottish lighthouse board still employs retained keepers who can travel to a station at short notice and clear up the mess. In hazy weather when other landmarks are obscured, birds are drawn in Hitchcock-like flocks towards the light, towards the only human presence for miles. The aftermath is often a mess of dead birds and smashed glass. In the lighthouse keeper memoir ‘It Was Fun While It Lasted’ by A.J. Lane, he recounts one April night where:

“… throughout the night birds, mainly starlings, drifted in the beams like snow. And not only in the beams. When I was undressing to return to bed at 04:30, four came down the chimney, attracted by the room light, and I had to turn it out and encourage them to leave by the window. This morning dead and maimed were strewn everywhere.”

Lane also writes that racing pigeons were “frequent and messy visitors” who huddled on window ledges and refused to leave. From disgruntled racing pigeons to balconies sunk in guano, much of the romance of natural encounters at the lighthouse is punctured as soon as you get up close with the experience. More unlikely (and terrifying) encounters also occurred. In an oral history of Scottish keepers, one tells a story of how their chickens all began balding as they’d been pecking at some stored explosives that were sweating nitro-glycerine, and on the small island of Ailsa Craig, the rat infestation was utterly hellish, the beasts fat and numerous thanks to the ready supply of nutritious eggs stolen from nesting seabirds and a desperate lack of predators. One keeper said:

“You’d go out at night and all you could see when you went out, you shone a torch cause there was no outside lights they wouldn’t have generated enough power to do it, and you’d have a torch to walk from the quarters to the light, and you’d shine the torch across and there’s millions of eyes staring back at you! The place was alive wi’ rats. The place was hooching’ wi’ rats. You’d shine the torch and there’s be all these eyes looking at you, these thousands of rats looking at you.”

Rats are thought to have arrived there by boat in the 19th Century, although it’s not clear where they came from, and one source suggests they were escapees from a nearby shipwreck. The first was spotted when the lighthouse dog killed one in 1889. Their numbers grew so fast that the following year a dog killed 59 in a single day. The infestation persisted until 1991.

Animals also worked at the lighthouse – Sumburgh Head on Shetland had a cow for milk before deliveries started, and on South Stack there was a put-upon donkey made to haul supplies up and down the 400 steps to the lighthouse. Seals were grumpy sunbathers hogging the scant outdoor space at rock stations built offshore: one keeper talked about how he learned not to walk between a seal and the sea – he would keep on the landward otherwise they would attack. Another keeper ended up getting an exercise bike at Bell Rock because even when the tide was out the seals would haul onto the rocks in such numbers you’d end up tripping over them and they would bite.

Sometimes, there were explosives left over from earthworks done around the lighthouse, or that were part of the fog signalling equipment. Tonite charges were used in fog at stations where there was no space for compressed air engines. These two-part explosives were slotted together and made live, then swung out on a jib to explode a few feet away from the lighthouse tower. Explosives were also, occasionally, used for fishing. Lane writes that at Eddystone sharks were quite common, often basking sharks:

“After tea on the set-off for a walk, I spotted the fin of a 12-foot shark quite close and the others came down and we stunned some fish with fog charges and had them for supper.”

By far the most wondrous account of birds and other wildlife at the lighthouse is by an ex-keeper called Norman McCanch, who took a job in the lighthouse service in the 1970s (after a stint working as a taxidermist) because he wanted a job where he could better indulge his love of birdwatching. A book of his diaries and sketches was published in 1985. In A Lighthouse Notebook he records birds, fish, and plant life at the sites he was stationed around the UK: Coquet, St Mary’s Island, Cromer, South Bishop and Longships. There are watercolour sketches of bream and lumpsucker fish, oystercatchers and puffins, the wings of swifts, a wounded bull seal with the scruff of its neck gouged out. He was a qualified ornithologist and would ring birds as part of a national scheme, often when they were drawn to the light in low visibility and could be easily caught, as they would “flutter against the glazing or doze in sheltered corners”. He is a restrained and evocative nature writer, who recounts a bird strike in the opening of the book, in a strange and hazy dream sequence of a man stood steaming in the mizzle as the sky rains unconscious birds:

“Other birds are about now, wheatears, sedge and willow warblers, a tiny goldcrest which flutters into me as I crouch in the darkness, and settles down to sleep on my arm… As I return across the yard I find tiny corpses of warblers lying below the aerial wire. A loud crash followed by a heavy thump indicates an unplanned landing by a Manx shearwater and I hurry to find him, sitting dazed and confused in the middle of the yard. Shearwaters are tough as nails and I gather him up into a cardboard box, to let him recover in safety. It begins to drizzle more heavily now as I stand steaming from the unaccustomed exercise of trying to catch up the living, collect the dead, and occasionally destroy the horribly maimed. The tiny willow warblers and chiffchaffs have natural predators to contend with, too, for suddenly the great shape of a short-eared own drifts through the beam to snatch a small warbler in flight. The tiny bird squeals and is silent…”

Reading McCanch’s notebooks, I learned more about what it means to be at a lighthouse, the way its rhythms were punctuated by the presence of other creatures. His encounters with wildlife offer a different perspective on life at a lighthouse and its workings, on the fact of these places being thresholds not just between water and land but places where different species co-exist in unexpected ways. The lighthouse and its foghorn might point out to sea, its eye watching and its voice calling out to the horizon, but if we turn our gaze back upon the lighthouse compound, we find a place where strange encounters with nature occur, where keepers fish with dynamite, seals nip at your ankles like dogs, and flocks of birds fall into the beam like snow.