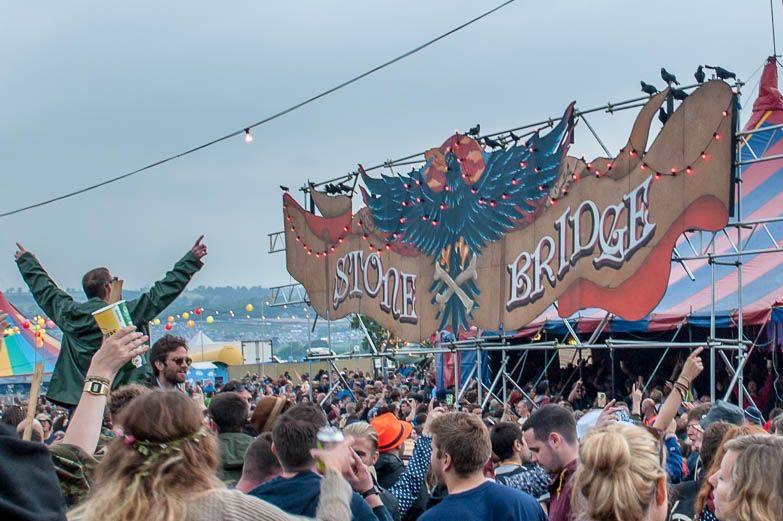 It shouldn’t come as a surprise when certain things end up knocking you back on your heels during lockdown. I’m talking about those tiny reminders of our past lives, those things that cause you to pause, reflect, then curse a little. Glastonbury week was always going to be one of them. In any normal year, solstice would be ticked off the list and a fleet of cars would head off for the Vale of Avalon, ready to set up shop in the Stonebridge Bar. If you’ve not been or can’t remember it, Stonebridge is the Social-adjacent tent opposite the Park Stage. It’s the greatest, rockin-est, randiest tent in the whole of the festival. But instead of preparing the ground for the dancers, we’re all sat home wondering if anyone’s going to bother texting us this weekend to tell us that Cliff Richard’s died again.

It goes without saying that Glastonbury is the still point in our turning world; chaos and magick that you can set your watch by. It’s where we see all those beautiful friends we’re unlikely to bump into until the next year, but who never tell you that you should call more. It’s where we end up laughing ourselves to the point of feeling sick with tears streaming down faces, the start of whatever joke it was that set us off a distant memory as the punchline lands like a nuclear blast. It’s where – if we’re lucky – we might even see a band or a DJ or two. My God, that would be nice right now.

My brain keeps wandering through what might have happened had the festival gone ahead in some non-COVID version of 2020. What would a Kendrick Lamar headline set have been like in this current climate of Black Lives Matter protests? How would I have been able to get my kids to watch Taylor Swift in safety on a Sunday night when they had school the next day? Would the hike up the highest point of the festival – the Crow’s Nest – five times a day actually count as proper exercise – in a proper, Joe Wicks kind of way – or does all the good work get undone by the 20 pints of lager that inevitably get put away on a daily basis? And what fucking time are Hawkwind on?

This week, as the fields would have been filling up with beautiful people, we’re hoping to post some writing by a few of our friends who work in various capacities at Glastonbury. We’re hoping they’ll offer some unique perspectives on the greatest festival in the world, viewing it from some of its less celebrated corners. While we’ve got some things sorted already – various mixes and playlists – we’re also making a lot of this up as we go along, so ideas should hopefully develop as the week goes on. The idea is to follow tangental ideas that send you off down a path that you weren’t expecting to take when you shook yourself awake that morning. Basically, a lot like the festival itself.