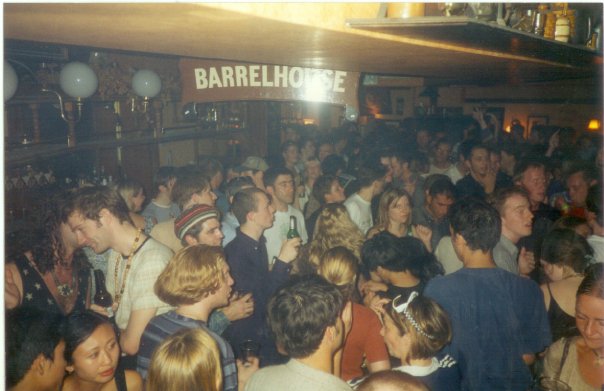 During the last decade or so, Andrew Weatherall was a regular presence at The Social. It wasn’t uncommon to see him manning the decks behind the upstairs bar as the staff poured drinks, or playing downstairs on one of his regular Moine Dubh nights, warming up for someone like Beck when he breezed through town or sitting listening, lost in a swirl of words at a Caught by the River night. Considering his well-deserved, towering reputation, he was remarkably ego free.

Back in September 1994, Andrew played records at the first iteration of The Social. Back then, weekends could roughly be mapped out with Friday nights at Sabresonic in London Bridge, some monumental hangover on Saturday before heading to The Social on the Sunday night. Like everyone who played there, he was booked to warm up for The Dust Brothers, a support slot for two up and coming DJs he’d helped put on the map after taking their first single in to Junior Boy’s Own. That night, he took the opportunity to reduce the hallmark pace and intensity of his sets around that point, playing ninety minutes worth of music that went from Mo’ Wax to Radio Clash via a bout with the Kung Fu Man. It was as transcendent as an hour and a half of getting high in a basement can possibly get.

The following week, me and my mates tried to track down as many of the records that he played that night, all of us armed with the multiple cassettes I’d made up from a DAT recording of his set. Nowadays, that kind of dedication must sound insane to a younger generation raised on instantly accessible everything all the time. No regrets though. If the lockdown has taught us anything it’s that time spent wandering about in the pursuit of happiness (and good music) is never time wasted.

Thanks to Mat Flint for keeping the tape for 26 years.