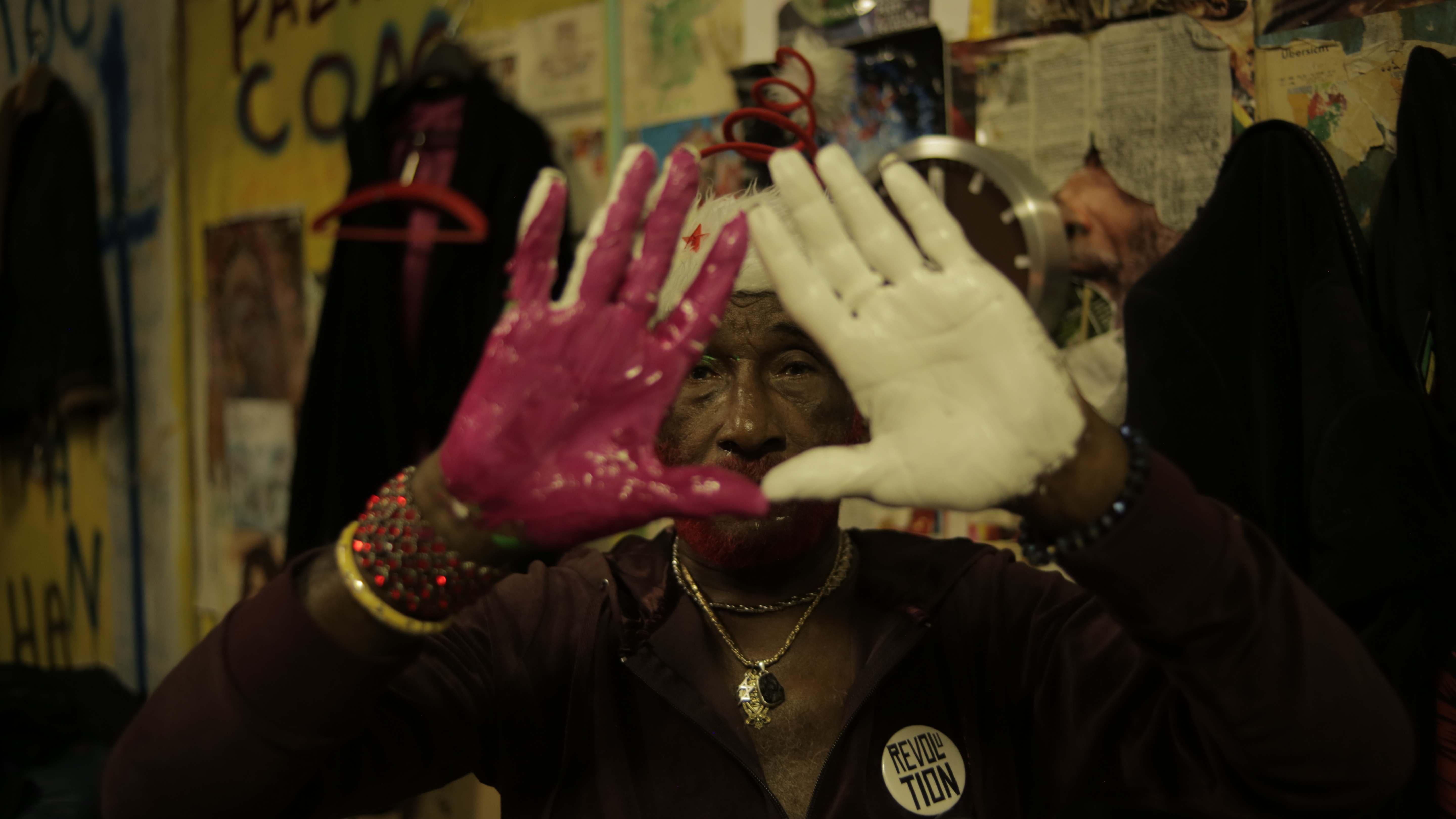 Soon after Lee ‘Scratch’ Perry threw off this mortal coil on Sunday, I received a missive from my author, Richard Russell, suggesting we might post a ‘remix’ of the passage in his book, Liberation through Hearing, which described his inspiring and extremely unorthodox collaboration with ‘Scratch’ in 2014.

This is not an obituary or an account of a life, it is a personal story which illustrates the ‘spiritual form of exchange’ Richard and ‘Scratch’ conducted through the ‘I Am Paint’ project.

At 2am on 23 November 2014 I found myself at Lee ‘Scratch’ Perry’s house in Lausanne, Switzerland. The legendary sonic wizard had spent the last few hours hand-painting 250 12-inch record sleeves with me. I was recovering from serious illness but felt good nonetheless, and began to ruminate on how I got here, and said to Lee, dub pioneer, the Piscean magician behind a lot of the most influential record productions of my lifetime, that I think I’d been having my own private revolution and it was starting to work. ‘It must work,’ he said.

Lee “Scratch” Perry knew about revolutionary thinking. He was a free spirit who had dared to use technology in ways it had never been used before, ways that have now become commonplace. Now everyone uses the studio (or the laptop) as an instrument. Before Lee “Scratch” Perry no one did this, and his influence is all over  modern music in ways no one foresaw.

He did things differently, so much so that people thought he was mad. My experience would lead me to believe he was anything but. He was not only mentally sharp and acute, but in tremendous physical shape, and I would witness him bending deep from the waist with perfectly straight legs, yogi style, while painting record sleeves placed on the floor.

Benji B had got in touch with me a few months earlier and asked me to do an hour-long mix for his excellent radio show. A decade earlier I’d have given myself two days to do this and executed it in a rush. In this instance I gave myself two weeks and savoured the experience. I included a new musical experiment called ‘I Am Paint’, a song I’d recorded quickly using a sample of Lee ‘Scratch’ Perry talking, from a documentary film about him called The Upsetter.

The song had sounded good enough in the mix I did for Benji that I decided to clear the sample and then press some vinyl. When I’d played the song to Ed Morris, who had recently shot the excellent ‘River’ video for Ibeyi, he had responded by making an ‘I Am Paint’ painting. This sparked the idea of hand-painting the 12-inch vinyl sleeves, and when I’d mentioned this to Hardy he’d said, ‘That’s a good idea, if Lee does the painting with you.’

I got in touch with Lee and to my delight he was up for this; having booked our flights to Switzerland, where Lee resides, I got around to reading the book K Foundation Burn a Million Quid, which details what happened when The KLF, a hugely successful late eighties Discordian rave duo, decided to burn all the money they’d made from music. I came across this quote in the book: ‘Money is the shore to which the vessel of man is tethered, and will remain tethered until man finds a more spiritual form of exchange.’ This resulted in a eureka moment.

Once we had hand-painted the sleeves, selling the records would not be a sufficiently ‘spiritual form of exchange’, we needed to swap them; and only for items people had made specifically for the purpose.

The trip to Lake Geneva to see Lee was a pilgrimage, some sort of shamanic journey. It turned out that by law you can’t bring paint into Switzerland, so Hardy, Ed and I gave ourselves an hour to go paint shopping on arrival. Having selected all the colours we needed in a paint shop we had located online, the emergency services turned up to evacuate the shop, as there had been a severe gas leak. But we were not leaving without our paint. This led to our being threatened with arrest for failing to evacuate a Swiss paint shop. We negotiated and eventually the paint was ours.

We had struggled to work out how we were going to paint all 250 sleeves in the one evening we had with Lee. Hardy pointed out that if each sleeve took a conservative estimate of five minutes to paint, the process would take around twenty hours, and Lee and his partner Mireille may or may not want us occupying their home for that long.

On arriving and explaining our predicament to Lee, he was unphased and instructed me to paint the soles of his feet, promptly walking all over the 250 sleeves. They immediately started to look like his work. He gave me simple instructions on how to hand-letter the sleeves, turning me into his apprentice, and by the early hours we had all 250 records artworked.

Back in London we rented a PO Box, set up a website, and the swaps began to turn up. The only criterion was that you had to make something specifically to swap. You couldn’t submit something you had made previously.

An astonishing selection of items started arriving. We received a perspex cube with a hand-made bird inside, denoting freedom. A box containing, it said, John Lennon’s air. Tributes to Lee in the form of oil paintings, sculptures, hand-made items of clothing, voodoo dolls, a hand-made puzzle, jewellery. A golden 3D printed Pegasus.

Studio engineer John Foyle submitted an incredible hand-made music box which played the ‘I Am Paint’ tune. The swapping climaxed in a hand-tooled leather-bound book arriving from RZA of the Wu-Tang Clan and his collaborator Cilvaringz, telling the story of their adventures in a similar realm, when they made one copy of a new Wu-Tang album and sold it to the highest bidder (with unintended and controversial results). The book included a part about our own ‘I Am Paint’ experiment.

The experience of receiving these items brought nothing to mind so much as receiving birthday presents when I was a child. Total excitement, and the joy of knowing we were encouraging peoples creativity and nudging them out of their comfort zone.

The “I Am Paint” 12-inch was named by the Vinyl Factory as the most valuable record released that year, so everyone who went to the trouble of making something ended up receiving something of tangible material value for their troubles. But I’d like to think this is not all they got.