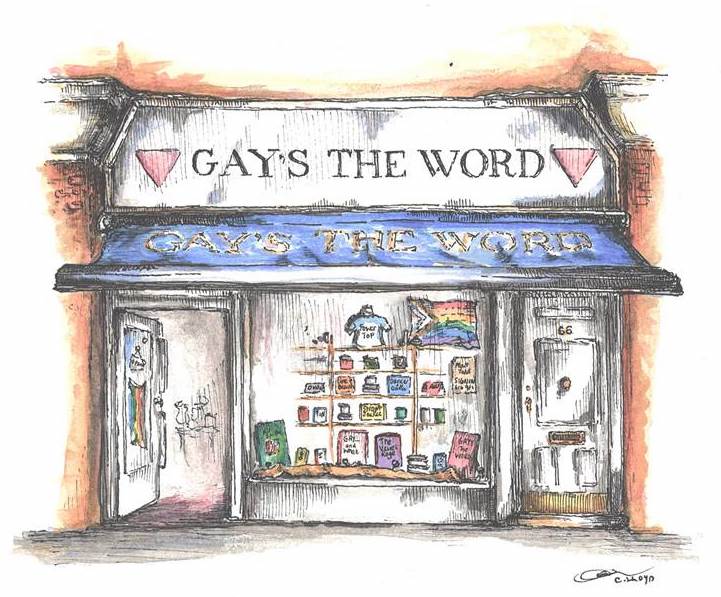 Back in 1988 life as a closeted gay teenager felt to me like being a spy in a cold war thriller. Not the sort with loads of sex and glamorous locations, but the kind where shady figures lurk by dead letter drops and quietly surveil the world – a place that wasn’t to be engaged with, just observed. Until, that is, one day in the spirit of Glasnost I decided to make a move, and came out from the cold. I’d been to an exhibition at the National Gallery with my A-level art class. Afterwards they headed back to Croydon, but I had more important business. I was going to a place I’d read about in Gay Times, a magazine I bought from a newsagent far from home in case I was recognised. My destination was a bookshop. A gay bookshop. The gay bookshop. Gay’s the Word.

The irony was, I actually had a Saturday job working as a bookseller in a chain store at the time. But because I wasn’t out it meant that browsing the shelf of ‘gay literature’ let alone buying something from it felt impossible. For others in my A level college life was about being a goth, or living for the mosh pit, or dressing up. For me, bookshops were the thing. This one was walkable from Trafalgar Square, although back then I didn’t realise that, as unfamiliar with the city as I was with pretty much everything that might make me an adult. I took the tube, used my A–Z, got lost, found my way again. As I navigated the streets of Bloomsbury I even got to see the huge brutalist bulk of the Brunswick Centre, indulging another secret passion for modern architecture as I slowed my tracks on Marchmont Street, my heart-rate increasing.

I still remember the palpable shock of seeing the word ‘gay’ written in such big bold letters on the shop front, and looking around the street to see if people were shocked by it, but there was no reaction at all. It was just another shop, quietly existing among the dry cleaners and cafes. I walked past a couple of times just to see what happened. No big scenes. I pretended to be waiting for someone, hanging about spying on who was going in and out. Turned out, it was people. Being in the closet was exhausting.

Looking back my teenage years feel achingly timid, not so much Paris is Burning as Croydon is Damp. I was 17, and although I’d known I was gay for years I’d never spoken about it to anyone. At that point I’d not been to a gay pub, club or youth group, and didn’t know anyone that was out. It was illegal for me to have sex because I was under 21. Like everyone of my generation I was all too aware of the growing AIDS crisis and the pernicious effect of Clause 28 and a homophobic media, bad news crowding in making an already difficult thing – coming out – feel impossible. After 15 minutes of shy cowardice I finally plucked up the courage and bustled into the shop trying to make it look like I did this sort of thing all the time. Once inside I acted with all the cool of three dogs in a long coat pretending to be a person. My reply to the cheery hello of the man behind the counter was a strangled squeak and robotic nod.

But once I was in, looking around was incredible. Here were bays of feminist literature, biographies of people I had never heard of, histories both epic and micro, weighty gender studies tracts, literary and extremely un-literary fiction, and some erotica I circled around like it was a snake I was attempting to tame. Look at all the photocopied pamphlets and coffee table art books, self help and smut, forgotten classics and underground comics, all brought out into the light. The vibe was indie bookshop for sure, but also community centre. For a shop it didn’t seem particularly pushy about selling stuff, being as much a place to hang out and browse and chat as anything, part of the socialist values of its founders. Despite – or perhaps because of – the chaotic collision of cultures and production values around the place, the feeling was of quiet calm. I’m sure it wasn’t like that all the time, but for me it was one of its great virtues in a period when so much outside felt hostile and pressured.

The first book I remember buying from there was David Rees’s The Milkman’s On His Way, a charming coming of age novel I re-read dozens of times, swiftly followed with two more, Timothy Ireland’s Who Lies Inside and Patrick Gale’s The Aerodynamics of Pork. These books gave me a sense of hope sorely needed at the time. Gay’s the Word helped bridge two parts of my secret self, the quiet boy who loved to read, and the one who was holding his sexuality under house arrest. Later when I was finally out and in search for something darker than all of that positivity, Gay’s the Word were there too, with Jeanette Winterson’s poetic Oranges Are Not the Only Fruit, Larry Kramer’s terrifying Faggots, and the twisted noir of Dennis Cooper. The range of voices has always been its strength.

This week that Bloomsbury landmark celebrated its 42nd birthday. It was founded in 1979, the same year that Heaven opened. One of the real joys of Gay’s the Word is how it has endured so physically and philosophically connected to its original purpose. You can still feel traces of the late 1960s hippy underground it grew from, of Oz magazines and Timothy Leary dearie in its embrace of the counter-cultural and lo-fi. Yet it was also ahead of its time and the rest of the world has taken a long time to catch up – and in many senses still hasn’t. Its resilience in the face of numerous attacks on the shop, its steadfastness in helping good causes – such as Lesbians and Gays Support the Miners, so warmly depicted in the film Pride – and its purpose as a base for many long-running social groups has made the shop a legend within British gay culture. The boom in independent bookshops we are seeing in reaction to online mega-corps owes something to the success of long-standing community booksellers like Gay’s the Word who have stuck to a sense of purpose and rode out the good times and bum times. Meanwhile many of London’s pioneering LGBTQ+ venues have gone: the First Out café bar by Centre Point; feminist bookshop Silver Moon on Charing Cross Road; the Black Cap; the Joiner’s Arms; the Queen’s Head. As communities move online, and their meeting places are forced out by rapacious landlords or unsympathetic redevelopment the continued physical existence of Gay’s the Word is to be cheered as much as its varied stock and events

A recent purchase from there, an excellent history of Gay Berlin by Robert Beachy that they recommended on bookshop.org, has been a great escape in these times of limited horizons. In some ways it has connected me directly to my shy, dorky 17-year-old self who snuck into the shop that first time. It would be a while before I would venture into gay bars or clubs, and the books I bought there and read helped feed a longing for the reality of experiences to come. All these years later Gay’s the Word is still helping me connect with LGBTQ+ experiences far beyond my doorstep. More than a reason to bake a cake, I reckon.