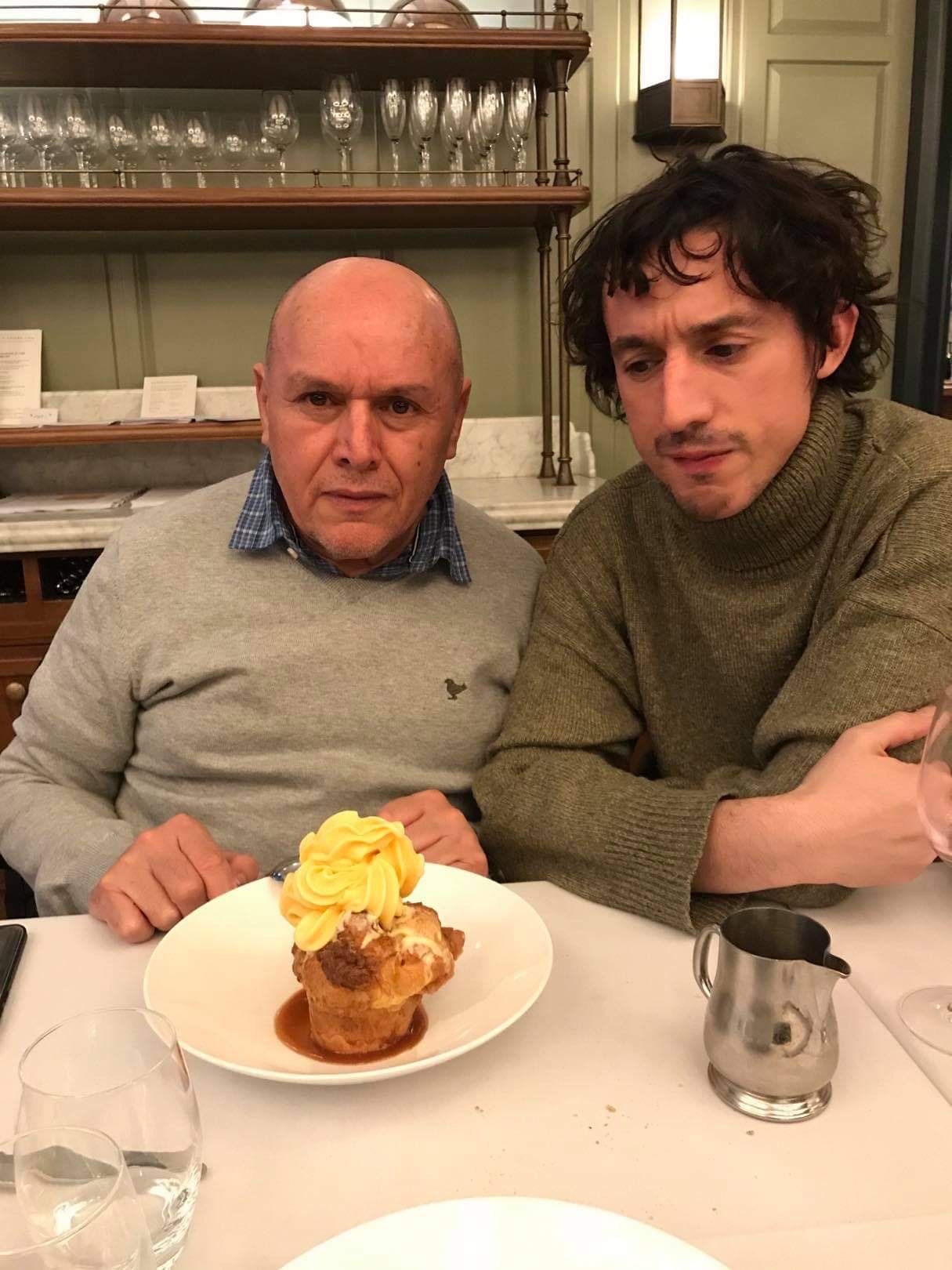 Quick, there’s very little time to spare. We’re almost at the end. The weekends here are impossible as far as writing anything is concerned, and there’s only one of them left separating me from a reunion with my mum and my brothers, from the inactive sprawl of ‘the Holidays’. My father hasn’t got any software to engineer at the weekends so spends the entire day, not just the evening, shouting at his television and at his wife. The sound of his muffled, eternal protestations emanating up through my bedroom floor are crushing as far as stringing a meaningful collection of thoughts together are concerned. Jean Genet might have written his first novel on toilet paper in prison, but it’s nothing as compared to writing your first essays in a chamber above the living quarters of Bashir; the five-foot stump of bottomless belligerence, the tyrant Klingon from the mountain top, the life-long complaint…Dad, but with a hearing aid now.

I’ve added nicotine to the bonfire of vice this week. That’s not what I’d like to talk to you about today, I’ll save you the tedium of yet another lecture on giving bad things a miss. It is funny how much worse it is than all the other drugs though. It will not leave the bar. Has to be dragged out into the gutter by the scruff of its neck, screaming and spitting and calling your mother a whore as it goes. No, today I’d rather talk about giving good things a miss. In the Spring I got in touch with John Doran from The Quietus about writing an essay on Bob Dylan. While I’ve been doing my best to catch up on around a decade of lost reading my interest in music has shrivelled into a nostalgic prune. Other than ambient back-round noise and a brief resurgence of The Fall while I was hammering ketamine in the summer, I’ve pretty much just been stuck on Bob.

On three separate occasions I sat down to write the Great Dylan Essay. This was to be definitive. The chronicle of a life-long obsession, it would straddle the political and the personal with a deftness of touch not seen since Annie Ernaux’s The Years. I doubt there’s anybody alive that reckons what the world needs now is more Bob literature. This gave me the advantage of surprise. Of course, I hadn’t read any of it. This was a central tenet where my treatise was concerned. My relationship with Bob was too pure to allow myself to taint it with even the most meagre research. What I know of Bob I know through the oeuvre. This was enough. Had to be enough. Where he lives now, what his kids do for a living, how many times he’s been divorced…this was all just needless baggage.

Good criticism can be as insightful and inspiring as the work upon which it applies its analysis; Houellbecq on Lovecraft, Mark Fisher on Joy Division, Camille Paglia on Oscar Wilde; these are some of the finest things I’ve read from any genre in the last few years. Greil Marcus is also one of my favourite critics. Lipstick Traces and Dead Elvis are books I hold dear to my heart. Some of it is the best kind of writing, the kind that can change your life. I could have had an Amazonian minion bring me a copy of Bob Dylan by Greil Marcus at any moment I wanted. Beyond question that book is brimming with revelations. I am aching to read that book. It’s not as if this year hasn’t provided me ample spare time. I have had at least 7 people practically demand I read Bob Dylan by Greil Marcus. But I won’t. I Refuse. It would be like having someone come over to your house to show you how to make love to your spouse, someone more capable no doubt, more tender.

My opening was a Das Boot analogy about the current state of the world. Casual doomsaying to commence, followed by some pilfered rhetoric on the demise of our culture due to the online revolution. I was attempting to write about the nature of fandom, where the pseudo-religiosity of celebrity culture actually comes from. Why the age of the titans is well and truly behind us. Everything’s been diluted down now, in the Warholian ‘five minutes’ sense. There will be no new Bob, no new Leonard. Those peaks will only seem more terrific, more definitive the further we roll down the mountain. I began formulating an apocalyptic compare and contrast concept in my head, Leonard’s Closing Time versus Bob’s Jokerman. When I’m high on coke, when I believe myself to be at my most charming, when I am at peak delusion/peak confidence, a habit of mine in conversation is to stress a blatantly untenable position, then attempt to walk it home as if it were the most natural statement ever made through a mixture of verbal obfuscation and ironical sophistry. I was intending on transcribing this same intellectual rigour down to the page by protesting Jokerman as the greater of the two tunes. Jokerman, unless you’re a Dylan obsessive mired in a national lockdown, is palpably awful. The challenge, the game if you like, would be to prove otherwise.

I got so wrapped up in this concept I began listening to nothing save for Jokerman and Closing Time. The lyrics flowed into my skull incessantly. They eventually became verbal paste. They were no longer decipherable. They lost all meaning. I began to question the fundamentals of my argument. I began to question why I’d ever even bothered asking John if I could publish an article in his magazine in the first place. Do I have any interest in writing about music? I’d spent a week on this and made it no further than two paragraphs. I was beginning to resent the subject matter I’d chosen. I was beginning to loathe Jokerman. I was impaling myself on my own cynicism. So foul was it by this stage, I’d failed to notice, to pay any meaningful heed whatsoever, to the record Bob had just released, arguably the greatest of his career. I abandoned the project. I accepted defeat. I was no music journalist, no critic. Unless I had to write about something I despise. That seems to come pretty naturally. John didn’t bring it up again. The Great Dylan Essay was left then to the void, along with all the other unborn shadows of my imagination.

Then, four months later, I became utterly, hopelessly transfixed with his new record. It clicked the same way Dylan had first clicked with me as a teenager. It rendered everything around it null for quite a long time. I’ve always been this way with music, quite conservative. One thing at a time, until that one thing is bled completely dry. It’s quite sad really, I’m not getting any better as I age either. Bereft of my old cronies and their kaleidoscopic musical infatuations I have become slowly but surely more like myself this year where tunes are concerned…a bore. I finally had something to get excited about though, something fresh, septuagenarian in origin yes, but fresh none the less. It sounded to me like Woody Guthrie walking onto the deck of Gavin Bryars’ sinking Titanic. Murder Most Foul was everything I most admired in music, like Lou Reed’s Street Hassle, it’s where literature and music get closest to each other. Where it becomes difficult to tell the two apart.

An aggrieved fellow devotee sent me Kitty Empire’s review in the Guardian. She’d knocked a star off of Bob on account of his none existent feminist zeal. It seemed ludicrous enough to me to warrant public ridicule, like marking someone down on Master Chef for wearing the wrong colour shoes. I toyed with the idea of starting an online spat with Kitty, perhaps this was the angle I’d been waiting for? I began mulling over the Great Dylan Essay once again, its culture war potential in the eternal Art vs politics debate. I quickly began feeling ashamed of myself for ever embarking on this line of thought. I’d denied Greil Marcus an audience only to begin toying with the idea of reducing this crucial essay to nothing more than a jibe at a review I knew I wouldn’t agree with before even reading it? What sad sack pedant was I morphing into? I screwed my head back in, dusted myself down and set about writing a serious appraisal of this masterful record. I would resurrect the idea I’d cast-off, except this time the comparison would be between You Want It Darker and Murder Most Foul. Atonement was nigh.

I dug out the essay I’d discarded months before. I began the inevitable cutting and pasting. I went on to briefly explore Leonards futurist tendencies, leading the would-be reader into a false sense of conclusion. Bob never scaled those heights, it was no contest, surely. I then launched into a scathing assault on the diminishing attention span of the contemporary audience. By recording a fifteen minute, structureless ramble, a sort of epilogue for the 20th century and its musical progeny, Dylan was in fact having the last laugh. The words ‘panoramic’ and ‘Boschian’ made an appearance. I think the word ‘vivisection’ too, although I’m less sure what that was about now, it’s been a while since I deleted the 2nd draft. It reduced me to a feeling of total worthlessness. It had to go. In my head, for days leading up to that last attempt at the Great Dylan Essay, I’d had the analogy of Tim O’Brian’s short story On a Rainy River in my head. The narrator attempts to flee the Vietnam draft, but upon illegally crossing the river overto Canada gazes back upon US soil and sees everything he loves and hates about his country in one grand hallucination. He decides he can’t leave it all behind. He goes to war. He kills and is nearly killed. He comes home. I spent so long savouring this comparison with Dylan’s latest that when I finally wrote it down, all that followed was complete emptiness…