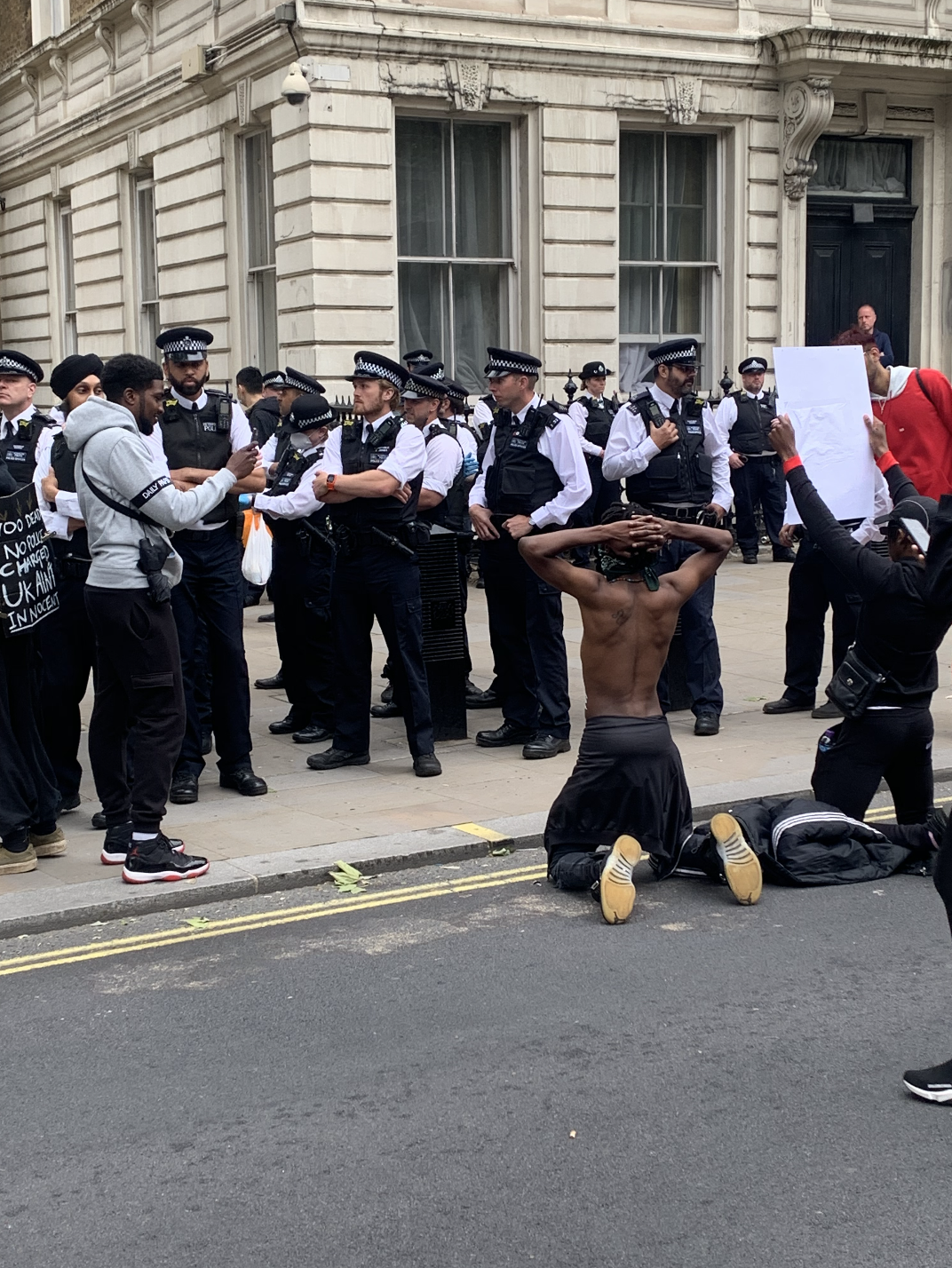 Stood outside Downing Street yesterday I saw something that cut through even my own iron clad pessimism. I haven’t been reading or writing much these last few weeks, well I haven’t been writing at all, I’ve been too busy sliding down a greasy pole, making the most of lockdown easing, seeing a few friends, drinking myself into oblivion over the thrill of it all. I took a trip up north to see my family at the weekend, it was my brother’s 40th, so we had a mini rave up with a bluetooth speaker in the meadows around Chorlton. It was one of those sessions that stays with you all week; my constitution can no longer hack it truth be told, I’m still off kilter now, and have accepted that I have to get out of the city, less I fall easy prey to binge drinking/drugs and waste yet another year of my life drifting between hangovers, unable to construct a meaningful chain of thought, unable to see anything for what it actually is.

There was no such trouble in Whitehall yesterday though, quite the opposite. I’d ambled along from Vauxhall up through Parliament Square and then settled outside the residence of our beloved commander-in-chief, where a crowd of protestors were letting loose their disdain, taking turns at howling anti-racist tropes up to the heavens, call and response, massive waves of applause occasionally rolling around the street. I spotted a young guy casually sat on a wall not far from those big black gates that keep the PM safely tucked away, he looked like a young black version of Alfred Molina, heavy set, with an especially thin outbreak of facial hair that suggested puberty really couldn’t have been that far behind. He began rasping off the slogans of the day one by one in front of the mob, and as he did so it was like watching some tightly wound coil of fear snapping inside the young man, a self-replenishing cyclone of anger and terrific empathy raging its way through his frame and out of his mouth. It was like he was collapsing into the words; you could tell by the trembling coupled with the increasing explosiveness of his delivery that this was coming from a place somehow beyond his control, beyond anybody’s control, and with each phrase the crowd immediately reciprocated, attempting to match him for energy on each count. Suddenly he was the focal point for the entire moment, he was possessed, and then so all of us were in turn. In fifteen years of life in this city I don’t think I’ve ever seen an energy quite like it, this kid could plead, demand, confess, enrage and forgive in a single breath, and when he finally stopped, once his rallying call had reached its lofty crescendo, his face for a moment fell empty in a kind of exhausted shock, only for the crowd to erupt in thunderous solidarity, the applause was almost deafening, and the most beautiful thing in the world, suddenly his face lit up with a knowing smile. The sight of it made my skin sing, it made my eyes water, it left me welling up inside and to recall it sat here now does exactly the same. It was as if you’d just seen someone find their voice, out of the darkness and isolation of the last few months you were watching a young person give birth to themselves anew in spite of seemingly insurmountable oppression and hopelessness, it was the very definition of the word heroic, it was utterly and unquestionably inspiring.

The virus has done nothing if it hasn’t laid bare the rampant, murderous inequalities of the world we live in, the one we delude ourselves contains a shred of dignity. What are people supposed to do, hold their tongues until there’s a vaccine? The world is already tuned to dissolve their hopes and aspirations; the dice, it has seldom been more obvious, are loaded, the people that run the shop do not care if you live or die, they do not care about your community, build it up and they will simply sell it off to the highest bidder once the time is right, once they can marketise your culture and your identity.

I’d been rolling the couplet from which James Baldwin derived the title of his famous 1963 book on the race problem in America around in my head all day, I kept repeating it to myself as I walked into central from Streatham, ‘God gave Noah the rainbow sign, no more water, the fire next time’. When I left my friends and began the long walk home that evening the mantra re-emerged, but its meaning had shifted. I’d always loved it for its destructive intent, there was a sense of vengeance in it, delivered from on high, the allure of an almighty, swollen with wrath, it didn’t seem too strange a bed fellow laid next to my generally bitter and cynical view of the world.  A couplet like that can lodge itself in your soul forever, and how you re-interpret it along the road of your life can prove an effective way of locating yourself amidst the chaos. It now spoke to me about an unfathomable tenderness, and for a moment I hoped that the excitement I felt in my chest and the pace with which my thoughts were now racing was the ‘fire’ in question. Absolute power to the people going out and making their voices heard across the world right now, it feels like something truly crucial might finally be beginning. Could there be a more incendiary way for young people to come back together again? Not some pointless bout of corporate hedonism, not another decadent slump, but with a tidal wave of defiant and pure self-expression, of total inclusivity, of a love supreme…