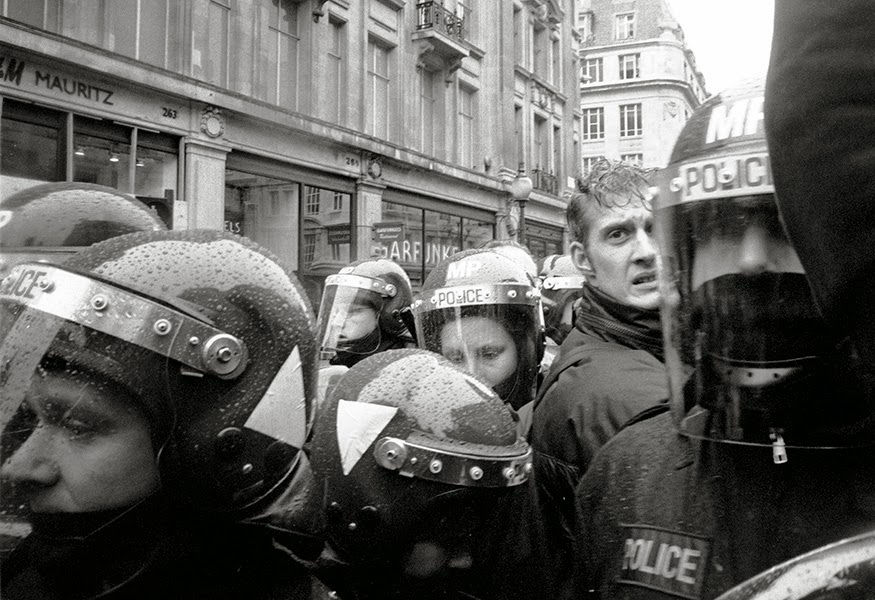 BDS is one of my favourite photographers but somehow I’ve never seen these photos he took at the May Day protests just after the millennium. They are an incredible bit of time travel, taking you back to a very different London – one where you were far more likely to be ‘kettled’ than socially distanced.

The scene is Oxford Circus. It’s a spot in London I know very well; it’s been my tube stop for almost 20 years as the nearest point of transport to The Social. I was thinking last week about the amazing pink Extinction Rebellion boat that dropped anchor at that crossroads about this time last year for a whole week. It was one of the best things I’ve ever witnessed in London. Those XR protests felt like a brilliant and joyous act of revenge for what happened in central London back in 2000/2001, so brilliantly captured by Brian. The subjects of his photos might have failed, but last year people did reclaim the streets… and the entire Circus.

From about 1999-2006 I used to photograph a lot of protests on the streets of London, I was never much interested in the cause of the protests more the act of ‘protest’ itself. It was its own kind of street theatre, with its own cast of characters and roles to be played out.

“You are being detained here to prevent a breach of the peace and criminal damage to property. You will be released in due course.” was the police line. The ‘kettle’ was in place, the ‘normal’ police blocking the exits were replaced by those in their full riot gear. Any attempt to leave the cordon was met by shields and batons.

The rain continued to fall, by now my equipment was getting a real soaking, my cheap flashgun gave up the ghost and the Nikon F4 got water in the body resulting in only half rewinding a film, ruining some pictures when the back was opened. Luckily the old Leica M4-P had no electrics to go wrong, so soldiered on.

I had not been in London long and was still finding my feet as a photographer, going back through contact sheets and dusty negatives I found that I’d spent a lot of the time photographing the police rather than the protestors or the protests themselves. It was the first time I’d really seen riot police in their storm-trooper uniforms (quite strange if you’d been brought up in a place when the police’s most high-tech piece of kit was a Mini Metro), and quickly became fascinated by the only section of them that was visible, through the visor of their riot helmet. It seemed that I had spent the whole day concentrating on this little window of humanity. Once I’d found this angle I started to work, at the same time watching the game of chess between the police and protestors unfold, the clashes, the insults, the boredom.

At this point in time I did not have a press pass, I shot really just for myself and the camera gave me an excuse to witness events I was interested in, so when I saw press photographers showing passes and being able to leave the kettle I felt a pang of jealousy but at the same time felt determined to stick it out. I was finally released from the kettle at around 6/7pm. At least the rain had stopped.