Message from a Time Traveller. The Upsetter lives – Justin Robertson 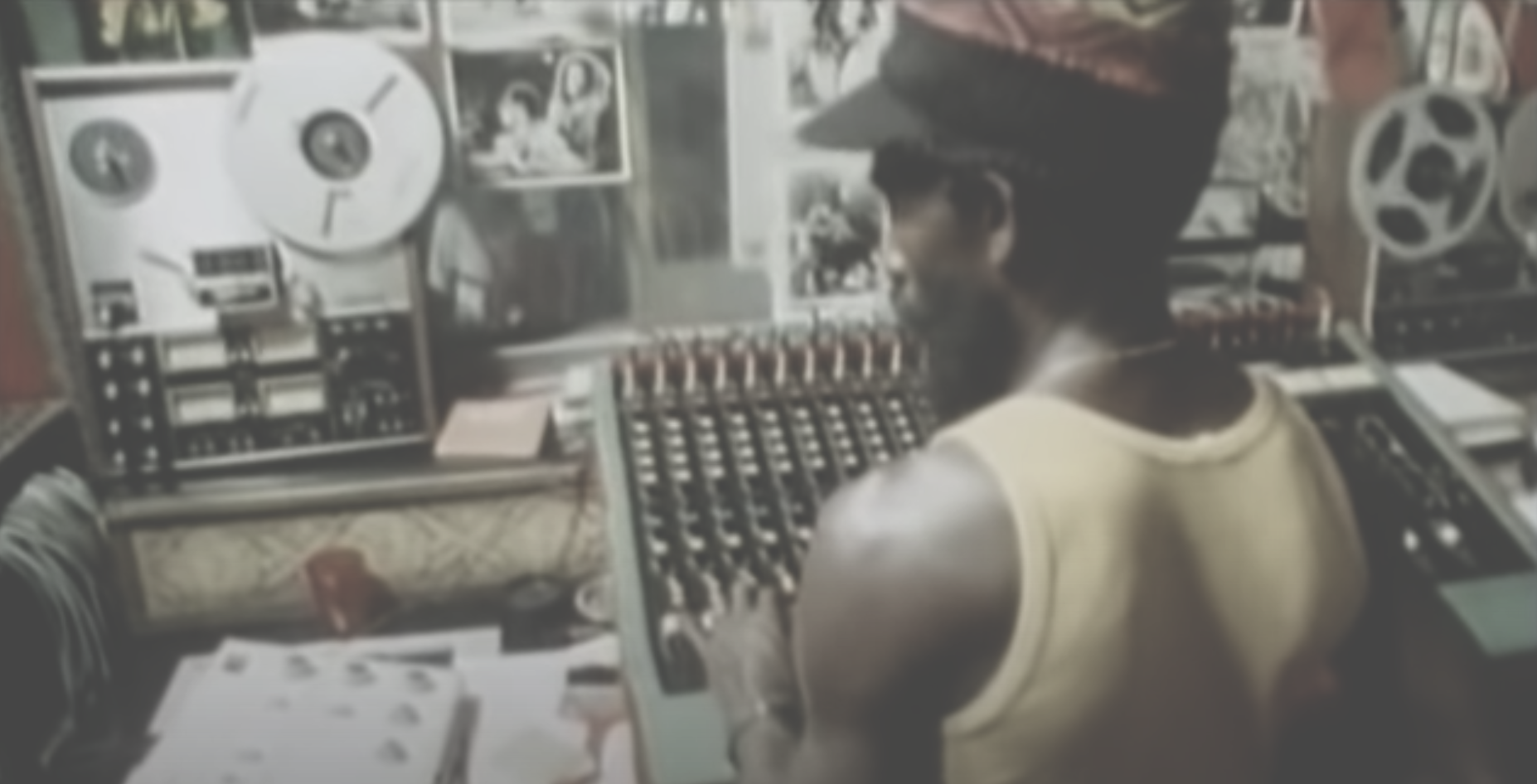 We’re not going to die because I’m positively sure that music cannot die. The music is eternal in my thoughts. The music heal brain and heal heart and make you happy. If the music die, everybody going to die. (Lee Perry)

Its 1982 and I’m barefoot in the Octagon centre in High Wycombe. The land of make believe by Bucks Fizz is straining out of a clothes shop’s inadequate speakers. As a teenage representative of the counterculture its saccharine lope is the crystallization of all I hate. I’m barefoot because I’m rejecting convention man, I’m connecting with the vibrations of the planet baby. Here outside Boots the chemist. In metro land, in the desiccated remains of the United Kingdom. But this isn’t 1968. Its 1982 and Bucks Fizz have won the culture war. They are playing on the tinny pa and their wild approximation of reggae is vexing me. The offbeat skank and wandering bass are present but incorrect. This is Thatcher’s Britain, and the band are named after a yuppy cocktail, I couldn’t hate it more. I’m barefoot because I reject the materialism of free market economics man. Here on the plinth a couple of yards down from Sainsburys. But I was wrong. One of the song writers Peter Sinfield was already in my home via the sprawling prog rock of King Crimson and as it turns out ‘Land of make believe’ is a virulent attack on the policies of the Conservative administration. It’s rebel music. It also contained a prophesy.

Run for the sun, little one
You’re an outlaw once again
Time to change, Superman
He’ll be with us while he can
In the land of make believe.

In 1982 I was a time traveller. On that particular day I was living in 1973. I had a portable tape recorder my father had used for his short-lived dalliance with ‘Linguaphone’. I had repurposed it into a sonic weapon that I could use to terrify the squares of Buckinghamshire. I wandered through the brick arches of the shopping centre, shoe less, sock less and possibly clue less with acid rock, horribly thin and distorted, blaring from my Bakerlite time capsule. Space Ritual was my chosen ammunition for the days conflict.  In those days I had a taste for escapist space rock, the world was dying and a journey to the stars seemed like an attractive proposition at the time. I was attracted to the other worldly weirdness and unruly structure of bands like Hawkwind, Tangerine Dream and Gong. Like I said I was a time traveller, stuck in the wrong decade. But I was eager to explore different dimensions. I engaged the pause button and entered the arcane vestibule of Scorpion Records. I took my traditional tour of the ‘rare rock’ section looking for limited editions with booklets and inserts. But as I touched the protective polythene sleeve of yet another live Grateful Dead album, I was immediately sucked into a vortex of swirling psychedelic patterns. It wasn’t in the least bit disturbing; in fact, I was half expecting it. My older brother had uttered the first lines of spell a few weeks ago on a crackly phone line from Hatfield polytechnic. Jah Stich. Prince Jazzbo. King Tubby. Lee. Scratch. Perry. Now the ritual was unfolding just as he said it would. I was still in 1973. But no longer in the cold depths of space but instead in a cloudy studio. It was filled with smoke, decorated with symbols and icons, and was shaking to the sound of the future.

Then it began. Evolution. The voice of mutation made manifest. Creation is the birth of something new from something familiar. Drums. Bass. Horns. Guitar. The human voice. Rearranged into fantastic new patterns. It’s 1973. In Europe and the USA millionaire rockers are trying to rinse the last drop of originality out of the delta blues that they casually stole more than a decade ago. Expensive studios. State of the art. But here, in this place, a wizard is making machines speak. Instantly, everything else now sounds ridiculously trite. Invention flourishes when resources are scarce.

I’m a miracle man, things happen which I don’t plan, I’ve never planned anything. Whatsoever I do, I want it to be an instant action object, instant reaction subject. Instant input, instant output. (Lee Perry)

Cheap bits of kit make history, they connect the frailty of flesh to the atomic flow. Punk rock technology. The four-track tape, the Grampian reverb and the Echoplex tape delay. The Roland 303. But that’s another story. Lee Perry is in the Black Ark conjuring the frequencies from these eager devices. He’s a conduit, a medium, a plug jack socket connector between man and machine. The Upsetters are in session and it’s beautiful, but there’s something beyond beauty, there’s a place where structure collapses and paradigms shift, where the faulty human mind can access a whole new pallet of impossible wonder. This isn’t ‘the studio as an instrument’ so much as the whole fucking building, garden, neighbourhood, island, planet, cosmos channelled into sound. You think I’m exaggerating? Put that record on right now and tell me it’s not the voice of something miraculous.

Us time travellers are used to being rudely tugged through the temporal soup when we least expect it. It’s not always welcome, but sometimes it helps you to connect the dots. It’s 1991, or at least it looks like it. I’m lying under a glass table in a friend’s apartment. The sunlight is making exploratory forays through the shutters, and I have the contents of some Dutch pharmaceutical laboratory coursing through my nervous system. I’m unfeasibly high. We have recently returned from an acid house  and, finding ourselves unwilling to surrender to sleep, we are instead embarked upon an historical trip through the archives of dance. Playing music, sharing music, that’s the essence of life. The act that lifts the hum drum procession of events out of the realm of absurdity and into the transcendent heights of the mind of God. MAN I. AM.SO.HIGH. ‘Without music life would be a mistake’ – Nietzsche said that. He was a strange guy, but he could hold a tune. So, the needle finds the groove. Arthur Russell. World of echoes. Scratch is there. The sparse drum and bass punk funk of ESG. Scratch is there. Hip. Hop. Cutting. Sampling. Scratching. The Upsetter is there. The alien magic of Phuture’s ‘Acid tracks’. Dub. House. Disco. Lee Scratch Perry is jacking in that groove too. My friend flicks through another pile of tunes. The sacred pile, the tabernacle of especially revered sounds. He pulls out the philosopher’s stone.

As the haunting melodica drifts on an ocean of reverb, my strobing eyes struggle to focus on the glass tabletop. Time to travel again.  It’s August 31st, 2021. I’m barefoot on my bed. I’m reading news reports that suggest that a couple of days ago the great Upsetter Lee Scratch Perry had died. I find this news upsetting but also puzzling. Because I’m a time traveller so I know that this is not true. No one dies. Nothing is lost. Bodies may fail and whither and we might bury them and mourn their passing. But this is only really a selfish sadness for a part of us that their bodies took with them. They did not really die. They are still here, transformed but never destroyed. The Black Ark is dust, but I can see it now. I’m standing right here in it. The studio is cloudy, filled with smoke and sound. The machines are singing. The Upsetters are in session and its beautiful. Lee Scratch Perry is here. You are here.

Preorder ‘The Tangle’, Justin’s trans-dimensional trip of a debut novel