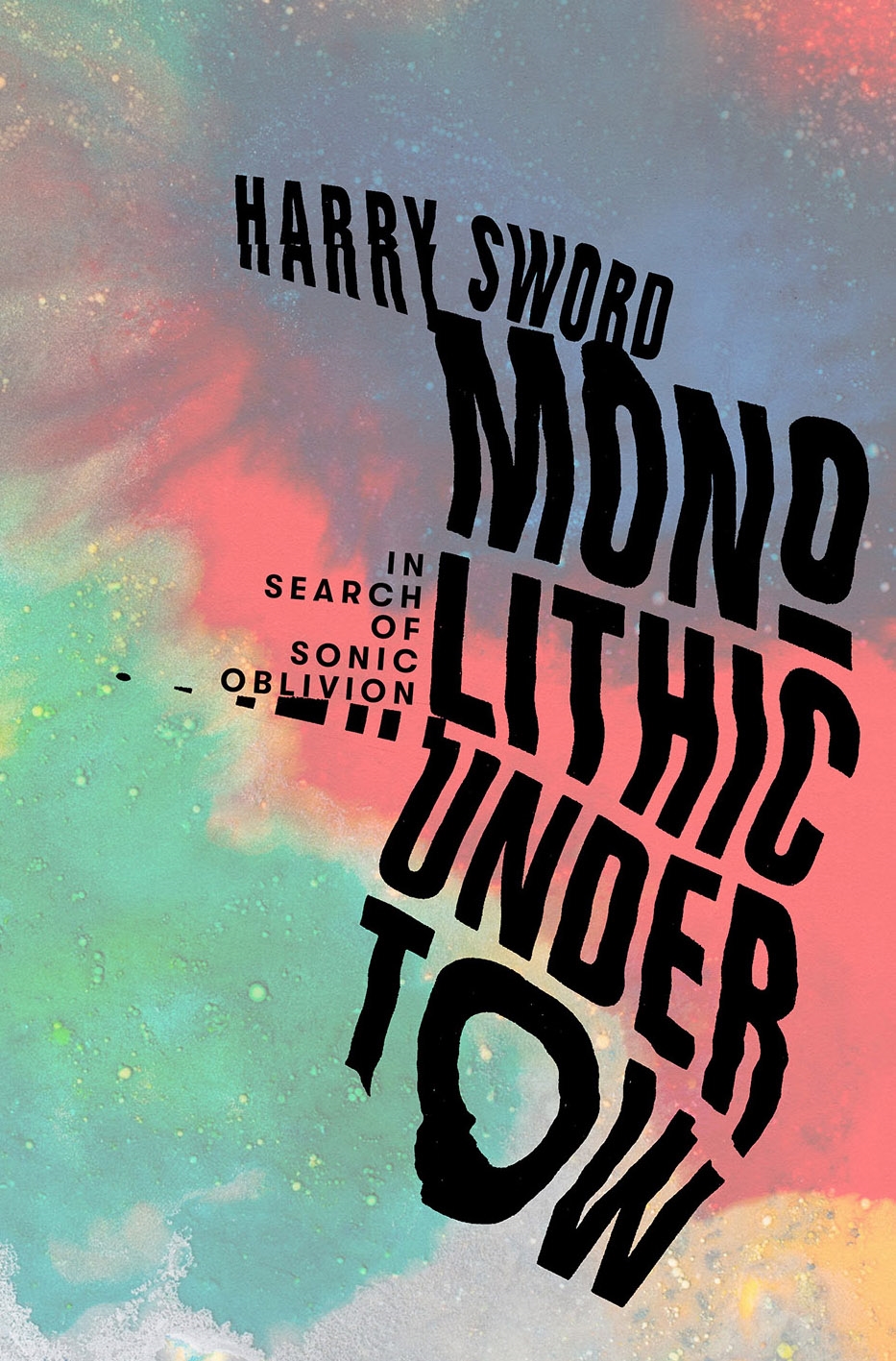 Today, White Rabbit Books announces publication of Harry Sword’s debut Monolithic Undertow: In Search of Sonic Oblivion (February 2021), a colossal history of ‘the drone’ as it manifests itself in music, ritual and the universe.

We shared an early copy of the book with Richard Norris of The Grid, who said this: ‘Harry Sword has drawn a Venn diagram of countless esoteric sonic treasures and puts the reader right in the centre, marvelling at their endless connectivity. I have shelves of books and music on the subjects covered here, but can’t recall them ever residing in a single volume. This story of sound and vibration, hypnosis and gnosis, is a great tale, and a fathoms deep resource – Electric Eden for drone heads.’

Here’s an exclusive and early extract from the book we have picked for Social Gathering to whet your appetite.

What do we mean by drone? The word is myriad. It can carry connotations both sinister and banal. A drone can drop a cluster bomb or deliver an Amazon order.

In music, drone is an audio space where age-old markers, such as verse – chorus – verse or complex progressions – are rendered redundant. Sounds don’t (or, crucially, appear not to) change at all.

Static, hiss, white noise, feedback – these are all drones. In essence, drone equals sustain – sustained sustain, if you will. Environmental and mechanical drones form the auditory backbone of urban and wild spaces alike. The acoustic byproducts of natural and manmade world are inescapable. Traffic; background conversation; wind; turbines – to be alive is to live with multiple background drones, whether we’re conscious of them or not.

Think of a power-cut and how it brings into focus the eerie quiet that befalls a house when the various mechanical drones that our brains are so adept at tuning out – the low hum of central heating, the buzz of the refrigerator, the churn of the dryer – actually stop. The removal without forewarning of the small domestic symphony we seldom otherwise notice has a disquieting effect.

But enough of the dishwasher.

I’m sitting in my kitchen with a cup of tea, listening to the sound the universe made as it expanded 600 000 years after the Big Bang. It sounds like Hawkwind. More specifically, it sounds like the band’s electronics division circa 1973, Del Dettmar and Dik Mik – bearded purveyors of rare cosmic misanthropy – setting up their rickety table of rudimentary ring modulators and letting rip in some musty Ladbroke Grove squat.

I listen again, lost in the magic of the cosmic infinitude. It sounds viscous, alive, intelligent. I hear transmogrifying sub bass, phasing, a creepy Doppler effect that builds with ominous portent.

That I’m sitting here – now – at my kitchen table listening through time to this universal sound feels miraculous.

At this point – as Professor John Cramer explains to me over a crackly phone line from Washington D.C – ‘‘a burst of radiation – what we call the Cosmic Background Radiation (CBR) – was released. It has been travelling through time ever since. This is what satellites are picking up: radiation that was produced around 600 000 years after The Big Bang. As the universe expanded, it essentially became a bass instrument. The sound-waves shot downwards at the same rate of expansion, which creates a Doppler effect.’’

You might be wondering by this point how can we hear such an event, billions of years after the fact.  Cramer took the data from a satellite sent to measure fluctuations in temperature in the Cosmic Background Radiation measured by a satellite system called Planck. He converted it to pressure variations (all sound is created by vibration – fluctuations in pressure) and entered the data into a computer program called Mathematica which, in turn, translated it to the sound file I’m now listening to at my kitchen table.

When Cramer played it through a powerful sub-woofer his dogs sat up, entranced.

‘I’d never seen them behave that way’ he laughs. ‘‘People ask ‘how could there be sound-waves in the early universe when space is a vacuum’. But the early universe was hardly a vacuum. It was filled with matter and had a higher density than the earth’s atmosphere. There was no problem with sound-waves traveling through it. Think of it like a drum head,’’ he continues, ‘‘a vibrating sphere. By analysing the frequency, you get information about what was happening. The frequencies are too low to hear – these were very large wave lengths, very low frequencies.’’

Make no mistake: we’re talking very low frequency sound – a tumbling leviathan of universal sub pressure, getting ever lower the further the wavelengths are stretched. Cramer had to boost the resulting frequency 100septillion times (100 followed by 24 more zeroes…) just to get the recordings into an audible range. Could we, I tentatively ask, say that the sound of the universe expanding was really more drone than bang?

‘‘It wasn’t really a bang at all,’’ he agrees, ‘‘It sounded more like an aeroplane flying low over your house. In that respect, yes – it was more of a drone than a bang’’

Cramer’s sound file feels like a cosmic magic, a beautiful synergy of scientific endeavor, sonic mystery and the humbling vastness of the expanding universe. It isn’t the only link between the cosmos and the drone, however. Researchers at the University of Cambridge’s Institute of Astronomy recently discovered what they describe as a ‘singing’ black hole amongst a distant galaxy cluster that emits the lowest sound waves ever detected.

Situated amid a group of thousands of galaxies known as the Perseus Cluster – around 250 million light years from Earth – Dr. Andrew Fabian and team found the sound it makes is a ‘single note… really a drone’[1]. Using a middle C as reference point, Fabian determined that note was a B-flat. However, this B-flat is 57 octaves below middle C – approximately one million, billion times lower than the lowest sound audible to the human ear.

While Cramer measured the temperature fluctuations, Fabian and team measured the distance between enormous pressure ripples on the outside of the black hole. These ripples – caused by the rhythmic squeezing, heating and movement of cosmic gas amidst the intense gravitational pressure of clustered galaxies – equate to sound-waves. By measuring the location of the ripples and the speed at which sound may travel between them, the team determined the musical note of the drone.

Ambient producer William Basinski’s recent album On Time Out of Time works with a similar sound, sourced from MIT’s Gravitational Wave Observatory in California – a piece of equipment tasked with observing cosmic gravitational waves. His album takes the sound created by these waves –  what he describes as ‘ripples in space time’ – and transposes them to the ambient sphere. The Berlin debut of the record reportedly opened with Basinski stating: ‘This is about what happens when two black holes fuck.’[2]

It’s humbling to be able to listen to audio fundamentals of such immense celestial force. But there is also a strange comfort in the idea of the cosmic drone. Rumbling outside the scope of human perception, a bass weight of godlike depth, out in the planetary ether.

A living sound that cleaves to the ultimate universal mystery.

Indeed, the idea of the drone as a singular force – the singular force – runs through philosophy, mathematics and theology like a gilded sonic thread. Take string theory. The theory of (almost) everything. In short: all universal matter is made up of infinitesimally minuscule vibrating strings. The Large Hadron Collider; Paul McCartney, a wooden chair;  – drill down far enough … it’s all vibration.

Vibration produces sound. All matter exerts force on the airwaves surrounding it. Every object has a natural frequency at which it vibrates when struck. Can ‘natural frequency’ therefore be applied to the universe itself? From a spiritual perspective, this idea takes on interesting significance.

In Buddhism and Hinduism alike, the drone manifests as the sacred OM – the vibration of universal matter. In Hindu philosophy, sound carries uniquely sacred significance. The concept of Nadha Brahmatranslates as ‘Sound is God’ –  a fundamental tenant of Vedic scripture. The divine is codified not as matter, but as sound vibration that runs through everything – co-existing in everything and everyone simultaneously. The unified nature of reality itself is – in theological terms – intimately tied to the drone.

The idea of celestial sound vibration was also considered by Pythagoras in the concept of Musica Universalis, the music of the spheres – the idea that celestial objects, stars and planets in orbit, emit sound. Legend has the Ionian Greek philosopher and mathematician walking past a blacksmith and noticing that the pitch of each hammer changed, depending on its size. ‘Harmony’ could, he deduced, be mapped: distance in sound charted in much the same way as the physical distance between, say, the village blacksmith and the village baker. He transposed his harmonic hypothesis to a cosmic scale – Musica Universalis – which theorised that the separation between planets should harmonically ‘map’ to their respective distances: ‘There is geometry in the humming of the strings, there is music in the spacing of the spheres.’

But humanity’s relationship to the drone begins in inner, rather than outer, space …

Monolithic Undertow is on preorder now