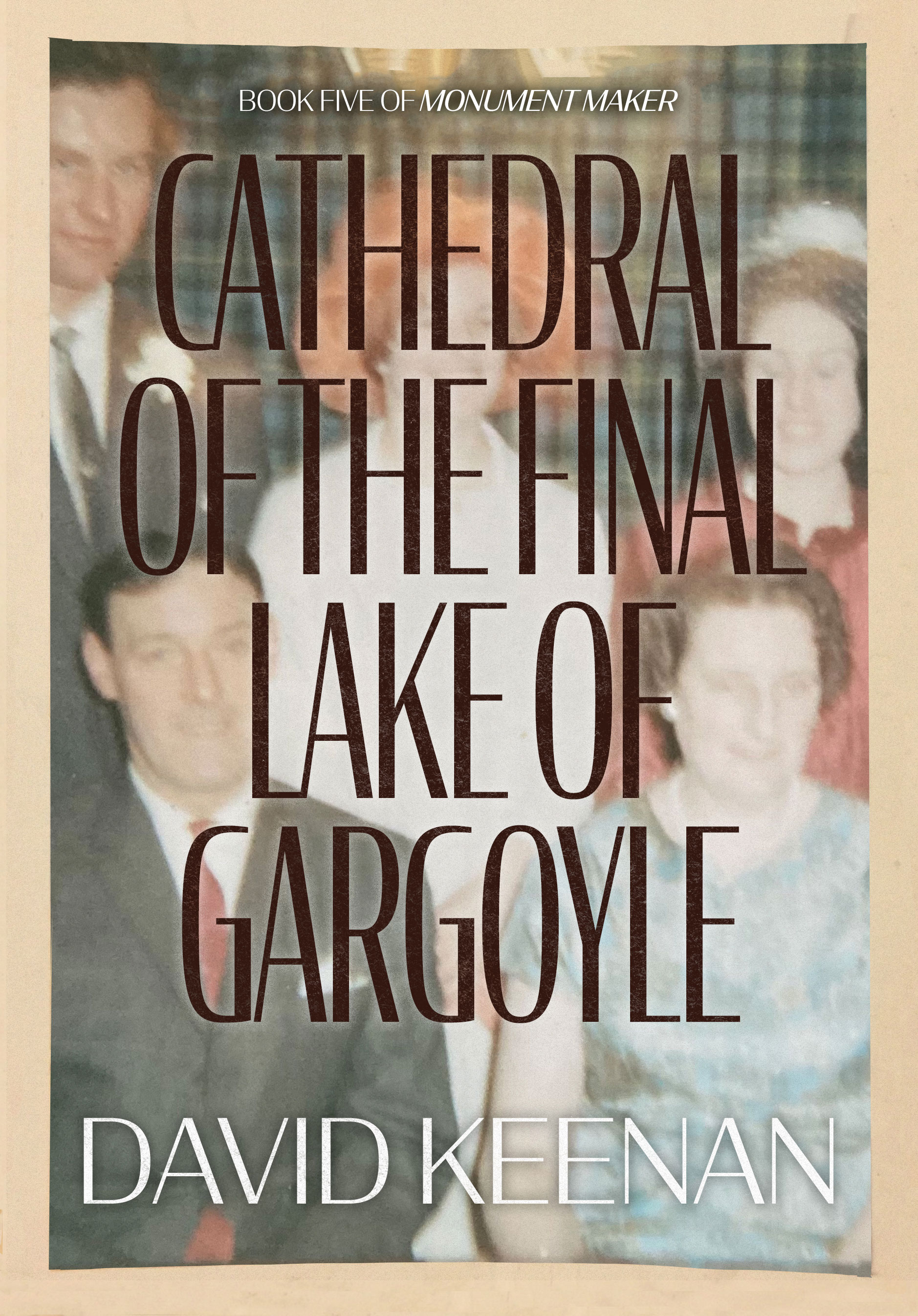 And then what happens: a body is discovered. A body is discovered come down a river entombed in a mysterious stone. It is a river of Africa. An unknown stone is come upon by a group of villagers in a river of Africa, which like the garden of Delius is for us an invisible village, a village of the mind, as a book is, an unknown stone is carried on a current throughout this book and is now washed up at a village of Africa in this book where the villagers claim that they heard the stone speak, which is why they attempted to prise it apart and when asked in this book, in the village of this book which we must imagine, what sound this stone spoke in, it was described as being like a screeching bird, like a parakeet, was the consensus, like a warning cry or a territorial marking, but then they thought, someone is entombed in the stone, they said, are there floating cemeteries now, they wondered, has someone been sealed in concrete (like a doomed dam worker on the Colorado River, is how the song goes, fallen into the wet concrete below), and so they lift this stone from the water, this coffin stone, is how they describe it, this black headstone, and it makes the sound again, the sound which one of the villagers impersonates, it goes Ook, Ook, she says, for it is a female villager with a lazy eye who presents the impersonation, Ook, she says, Ook, and she waggles her arms like a chicken or maybe an actual parakeet, who knows, and when they lift this coffin stone from out of the river they are surprised at how light it is, that’s exactly what the female villager with the lazy eye says, can you imagine her, she says, it was as if the stone was filled with light, she says, which is an odd thing to say but not if you think of how light the sky is when it is filled with light, which means, I think, that there was some kind of confluence of the elements going on, is absence light, is light mass, is absence present, is mass absence, are the thoughts going through these villagers’ minds, we can imagine, as it goes through our minds, our invisible minds in concert with this book, as we imagine Delius, in his garden, which now is the tomb of the song, and this stone, light-filled, now risen from the waters and prised apart, yes, that is the beautiful phrase we will use because to be prised apart is what the first stone demands, and it is love that makes demands, I don’t care what you say, call me apolitical, it is love, ultimately, that makes demands, and that is to be prized, apart, so as to come together, all over again, and so they crack it open, they crack open this light-as-air tomb, and what do you think they find, well, first they talk about the sign that was engraved on the front,

which the villagers, and there were three villagers in the beginning, we will reveal at this point there were three female villagers, although one goes completely unrecorded except for her presence, except for her attendance there is nothing else known about her, as if a lazy eye permits us knowledge, as if the scarification on the other villager, which appears as tiny tears, or as footprints, away from, and into, her glassy blue eyes, as pools of pure water in an endless desert, is how we will imagine her now, in this book of invisible encampments, and she says, it was a sign of the sun coming up between the mountains, was how she read it, she says, in a badly subtitled interview afterwards, and then her companion with the imagined lazy eye says, no, to me it was a woman lying back and giving birth, and she says, her legs are raised, in calipers, and the sun is shone between them, she says, in the same badly served translation, she says it, but then she says, ah, she says, it is the third eye on a Chinaman, I realise, it is the creased forehead of a guru, she says, it is a Sahdi Song, she says, but she declines to elaborate, but what I have gleaned is that a Sahdi Song is a song that sounds like it is coming from a long way away, just as tears often feel as if they have been coming forever, just as tears feel as if they were forever being cried, just to arrive, now, in our eyes, is the feeling that she received from the presence of this light-filled grave on the waters at this village of Invisible Africa, is a rendezvous, she is saying, which is one hell of a way to think of everything that appears right in front of you, that it set off towards you somewhere round about the beginning of time, that heartbreak and tears have been stalking you since year zero, and love too, and magic, also, set out long ago, as their companions, and here it is, now, an impossible light-filled stone on the water had made its way towards us, they said, this first three, and it was crying in distress, is what the woman with the water-filled eyes is saying in this book as if it were a memory or a fact, but how else has it come to us, and it is as if we are uncovering some kind of secret causeway, some underground railroad, some series of words and letters that would allow us ingress, and they start to break the stone apart like in a rescue mission and it seems almost impossibly dense compared to how light-filled it appears to be, and it is designed like an Egyptian bark but like a motorboat too, our lady of the pale-blue eyes says, because there is an engine, she says, and the first uncovering, through pickaxe and crowbar, and what were they doing with a pickaxe and crowbar at the river that sunny morning, it begins to sound more and more suspicious, or devious, maybe, devious is the word for the beginnings of us all, after all, but in its unlikelihood is its truth, it seems to me, but they split part of it apart, they sunder it like an Old Testament God, and there they have it: a white cube, all stained and damp with the tears that have been chasing after it, no doubt, and they say it is hermetically sealed, although of course they do not, they say no such thing, the subtitles say, I should say, the subtitles say, they say something like – and this is going on memory now, faulty memory in a book about imagining – something like, there were no seams with which to prise an entrance, I think it was, and seamless, I thought, seamless, not even a pair of testicles is seamless, but this seamless cube takes some imagining, which is as it should be, because as gods cannot we always do better, so they uncover this thing in a white cube, which is like a square of mathematics, I think, now, which is like an imposition of rules, well, okay, stone is the first rule, so what, and inside this impregnable white cube there is a dreaming head, is what this story goes on to reveal, and they take it out and it is a Sightless Head, a Sightless Head whose face has been effaced, whose face has been supplanted, whose face has been removed, and they say, oh my God it is a faceless head speaking and this is what it speaks: