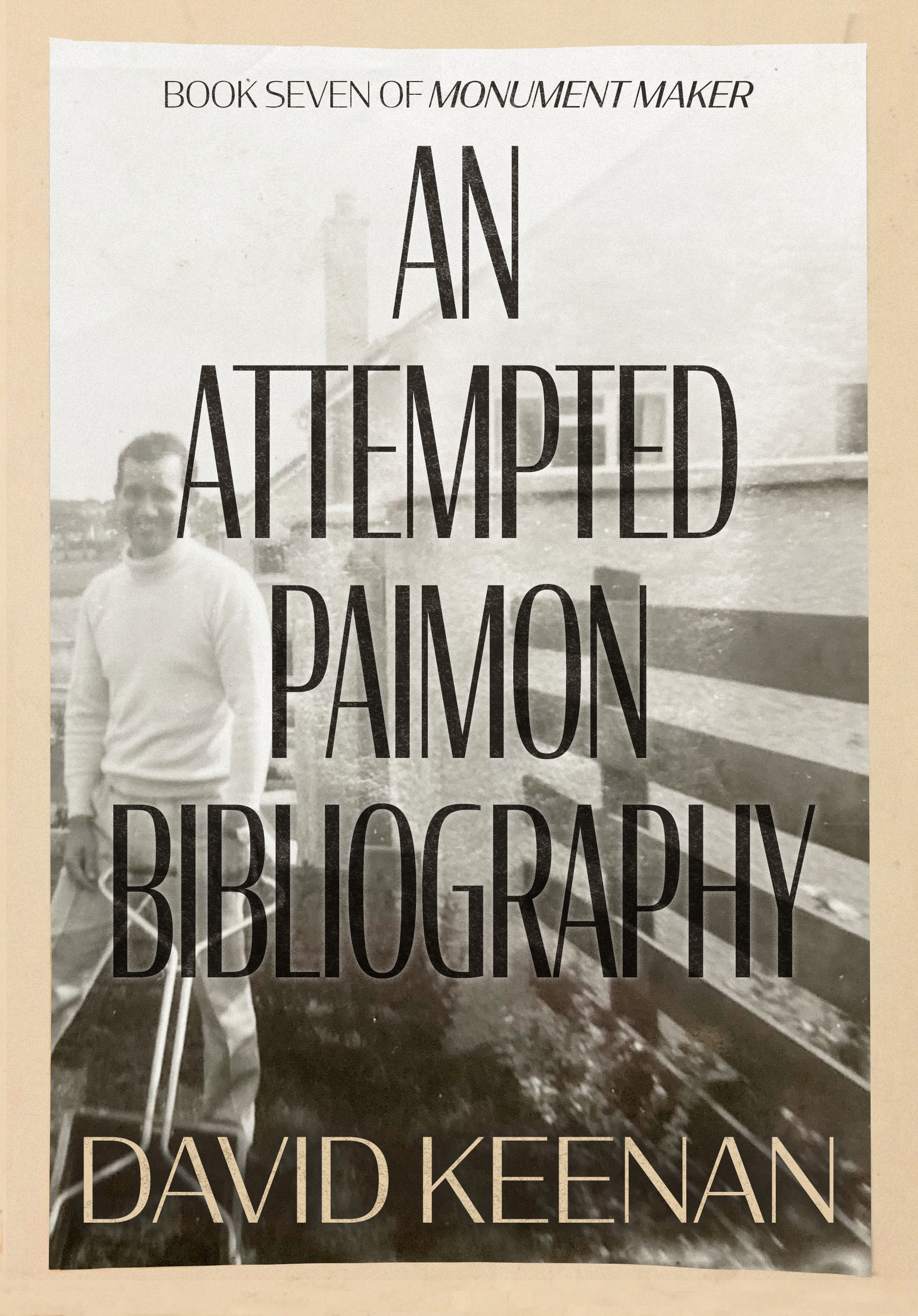 A SIRK publication © The Flashlight/Token Bob, 1995

Pirates of the Universe Divide (novelisation of an unmade Doctor Who script submitted to Douglas Adams in the summer of 1979, published by Tara, 1983)

Belly of the Fish of Christ, Ship (credited as a ‘found’ text, though textual analysis reveals, we feel, although we are not accredited textual analysts, we are fans, and deep readers, but nevertheless we feel close readings reveal it as a Paimon text, maybe the ur-Paimon text, in a way, maybe the Two Way Mirror of Paimon texts, actually, due to the quality it has of peering in, or peering out, at you and, of course, the opportunities for textual ingress it provides. We are not textual analysts, but we are ingressers, infiltrators. The first of the Holy Books, issued as a limited-edition chapbook with no publication details, though seems likely 1983, self-published)

I am the Lion of Judah (credited as a ‘channelled’ text, though, again, we identify this as a Paimon working, possibly. The second of the Holy Books, issued as a limited-edition letterpress chapbook with no publication details, though, again, seems likely 1983, self-published)

Proceeds of the First Synod of the Church of the Stone of First Witness (a Paimon text, certainly, though perhaps with input from ‘Frater Jim’, issued as a limited-edition broadside by the press that Paimon set up in Grez-sur-Loing and which was run out of the converted barn/garage that also housed Hildegard von Strophe’s ceramics workshop; the first of the Vanguard! broadsides, 1983)

If Unto the Red Planet, A Traveller (oddly precognitive short story about a man who returns from the first-ever manned expedition to Mars, all his companions left dead across its surface, and his memory wiped, so that he believes himself the first Martian to arrive on earth and writes the book If Unto the Earth, A Traveller about his experiences with an alien race who have mistaken him for one of their own because, he believes, Mars is a mirror planet, in fact all planets are, which is the whole basis of astrology and planetary hours and goetia and the raising of the dead; Vanguard! #2, 1983)

Crossing the Abyss (fictional/real (?!) account of a weekend binge on cocaine where ‘the author’ believed himself to be John the Baptist as he took a ferry across a river and had basically a psychotic episode in public which resulted in, he claims, an encounter with his Holy Guardian Angel, who it turns out is a complete and utter fiction and only there as a pair of armbands to get you to the other side of yourself, which is Abyss, as it turns out, which is the name of your Holy Guardian Angel, buddy, and not fucking Raphael; Vanguard! #3, 1983; nice hand-stitched edition with every copy stamped with the Vanguard! logo, which varied but was mostly based around the letter V on a stem or a pedestal like a cocktail glass with two bars or scores across it, thus: ¥. Edition of 127 copies, and yes, I am packing. 1983, natch)

Mathematics of the Asteroid Belt (short story, elementary potboiler about some educated bozos living in caves on spinning asteroids to hold off the end of the world or such saintly behaviour, and then getting attacked by aliens. The first experiment in ‘gridlocked’ text by Paimon, as we have christened and identified it; also, a quote from Lou Reed in the text, from the song ‘Some Kinda Love’. Published in Regardez le Ciel #24, 1983, of course)

Cry Me A Way (cut-up text, or one written while nodding off and waking up on horse, just as likely, with words spilled up into phonemes so that the text appears like Braille, or machine code, and printed with upraised letters, too, as if it could be fed into the mouth of a machine as a set of instructions, or enter through the fingertips of a beautiful blind girl sat in the sun, on the steps of her house, in the summertime; a deluxe edition and perhaps the high point of the Vanguard! issues. 1983, summer of, what do you think, edition of 33 copies: #need)

Caress Me A Waterfall (as above; variant)

Cover Mission As Wonderful (as above; variant)

If You Expect the Antithesis of Venus You Are Gifted, That, in the End (another smacked-out/cut-up production, beautifully realised, but now more like text-sound experiments à la Richard Kostelanetz; Vanguard!, 1983. Bob Dylan and Philip K. Dick quotes in acrostics throughout the text – it’s true, have a look – which can’t be accidental, but seems more impossible than any crossword)

Appealing for Calm is the Way of a Mass Catastrophe (privately printed photobook featuring photographs, by Paimon, I think we can safely say, of Hildegard von Strophe, often graphic, and abstract, 1983?)

Our Original Heavenly Nature is Fire Unsound (the breakthrough book and the first commercially successful Paimon outing, published by Nebula Books, 1983, about Star Gods, warring with ideas, vying to convince each other of their non-existence, until only one Star God remains, who has to start the whole thing again, for fear of loneliness, and an eternity of idle hands, and then his people fall in love with him, his creations, his flock, his church, and he models himself after their love, which means he has to bring all of the arguing Star Gods back again, because he now believes himself to be a loving, merciful, nostalgic and repentant god, as well as all of the normal god attributes, and of course the same old arguments start, and then what happens is an unknown starship turns up that none of the gods can even remember making, that none of them are willing to take credit or responsibility for, and inside the spaceship is a dead body, a dead body of something that has never died before, and the gods are amazed, a first death, out of nothing, is a miracle, even to the gods, they agree, and they are united in wonder, at the infinity of creation that even gods partake of, of the unsoundness of fire, and then it basically turns into a space opera of gods and men and goes downhill from there, in this humble reviewer’s opinion, but still, as with genre in general, it is textually unpoliced and provides multiple exit and entrance points for ingress, which may be a large part of its success, that people could disappear in it, easily)

The Coral of Heaven (deep space as undersea, the sound of seashells, on the seashore, as spaceways; Orizon, 1983)

The Metal-Plated Dream Inc. (robotics in the far future mechanise the dreamspace and lucid dreaming becomes ‘the fastest-growing market’ in technologies, the noumenon is colonised, by advertisers, and becomes a mall, so as imagination must purchase attributes, equipment, and adventure holidays; Orizon, 1983)

Out Lilith! Oil Skin of the Dark! (Follow-up to The Metal-Plated Dream Inc., earth-abound; Orizon, 1983)

Phantom Our Town, Africa (which is where a mirror planet is found in perfect orbit next to ours and we remodel it so completely, at war, it ends up as the moon; Orizon, 1983)

Imitation of a Shadow (retro 50s noir where the murderer is revealed as a many-tentacled, semi-translucent alien who lives inside our own brain and feeds on our thoughts like a dog with a tapeworm; Orizon, 1983)

Kazimir is Emerald for Forever (trouble at the court of the gods, as gods dream up new skills with which to assail gods and all of their subjects suffer, classic space opera, really, were it not for the semaphoric lines of punctuation that stand in for the speech of the gods, one of the weirdest successes of the 80s sci-fi ‘boom’ and further proof that reality is for people who can’t handle science fiction; Nebula Books, 1984)

Phantom Aros: Dream River: Tia Rio (full textual gridlock; the opening of the channels, the uncovering of the tunnels: still selling, but on this form it can’t last forever. Nebula Books, 1984)