No One Is Afraid To Touch Or Strangle Each Other. Hot Gossip & The New Romantics: An Appreciation by Heather Leigh 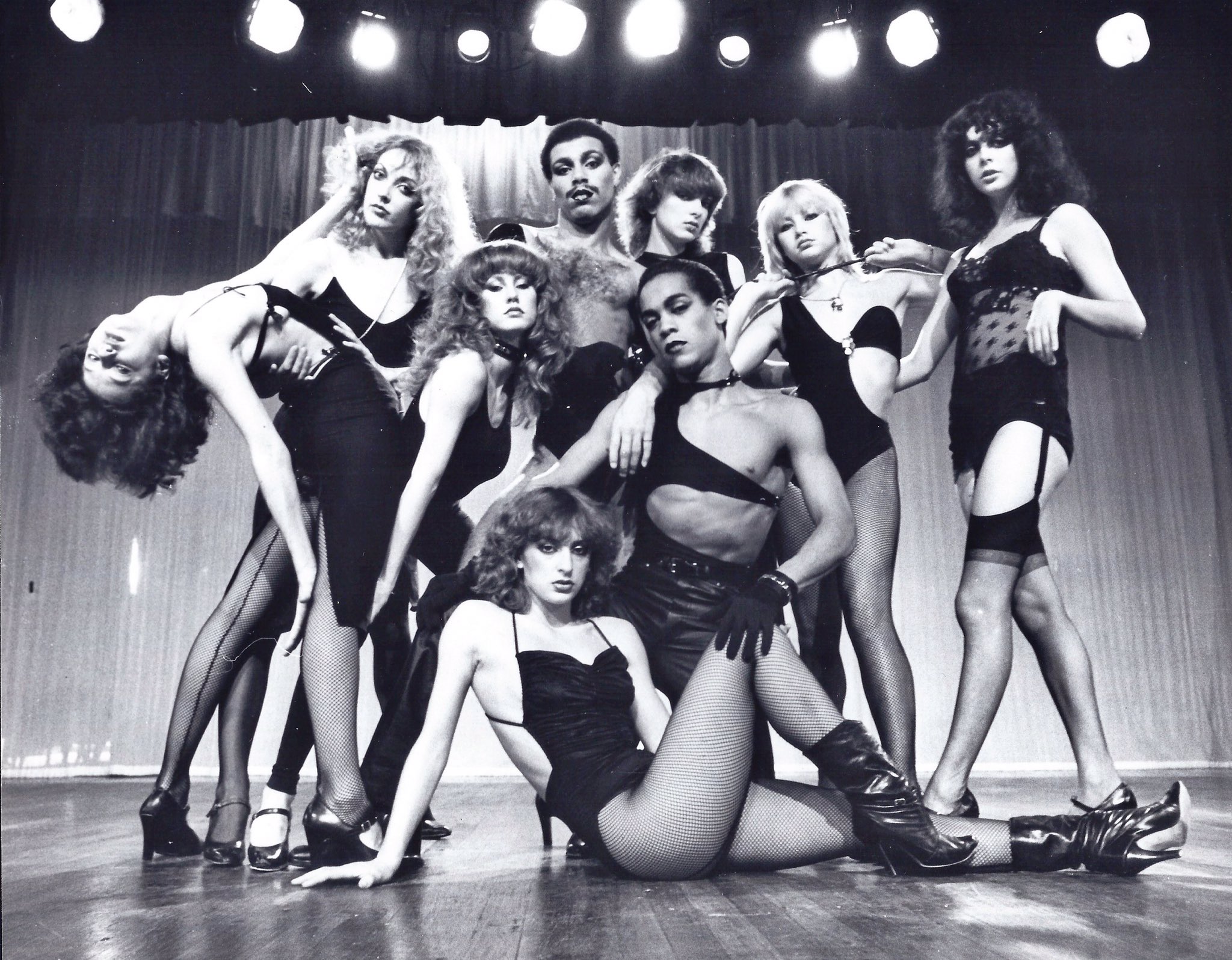 Sweet Dreams: The Story Of The New Romantics, the newly published book by Dylan Jones, has sent me back down the psychedelic wormhole of my enduring obsession with Hot Gossip. There’s something to love about all of the UK television dance troupes of the late 1960s to early 1980s: the gleaming angels in The Go-Jos; Pan’s People; Ruby Flipper; Legs & Co.; Zoo. Still, Arlene Phillips’s Hot Gossip remain my favourite, particularly their ‘naughty bits’ on The Kenny Everett Video Show. The ensemble was invited to be a regular feature on the show by its producer and director, David Mallet, one of the most prolific music video directors of the era. This was a glory period for British television in general. Telefantasy classics (and personal faves) like Doctor Who, Blake’s 7, Out Of The Unknown, Space 1999, UFO, Survivors, The Prisoner, Beasts, The Changes and The Boy From Space filled UK screens at a time when the most artful and intelligent broadcasts all felt sci-fi. Even Everett’s sets looked like they were filmed inside the TARDIS. The Hot Gossip girls seemed like they just stepped off the deck of Blake’s 7 Liberator spaceship though I fantasise that the ‘Federation’ reference in dancer Sarah Brightman’s hit “I Lost My Heart To A Starship Trooper” proves that they were actually on Servalan’s side. Hot bitches stick with hot bitches. Surely it was impossible that Mondays were blue during Everett’s mainstream prime time slot though it’s hard to believe they got away with such provocative dancing.

The UK had its own club, as gloriously highlighted in Sweet Dreams, The Blitz, in London, where my favourite of the Hot Gossip dancers, Perri Lister hung out. According to Blitz host Steve Strange, Hot Gossip used to perform at the club, only it was a ruder routine than they were allowed to do on television. I’d sure like to see videos of that! Lister fearlessly bared all as the iconic topless dancer in Duran Duran’s Newtonesque video for “The Chauffeur” and was fellow Blitz stalwart Billy Idol’s partner through the 80s, the backup singer on his hit “Eyes Without A Face” and star of several of his videos. She reportedly came up with the idea for the barbed wire wedding ring she wears in the David Mallet-directed “White Wedding” video. She insisted that Billy cut her and make her bleed for real. There’s nothing fake about Perri! She hooked up with Steve Strange to dance and do backing vocals for Visage alongside Hot Gossip’s Lorraine Whitmarsh. Both appear on Visage’s sexy second studio album, The Anvil. What a so-close but missed opportunity that Lister and Whitmarsh didn’t appear in the album photos and accompanying poster shot by Helmut Newton; a Hot Gossip/Newton collaboration would’ve been a dream come true. The Top Pop studio video for “Fade To Grey” that Strange & Lister cut together might be my favourite appearance by her outside of Hot Gossip, her moves are so confident in their originality. Strange looks like he’s just fallen out of bed after having an all-night tryst with a fling at a renaissance fare. He has no idea where he is. The Italian television versions of “Fade To Grey” they filmed together with Lorraine Whitmarsh are equally appealing and even more unadorned and raw. Lister and Strange recall a salacious story after the filming of one of their Italian appearances. In Lister’s telling, Strange pushed her and Lee Barrett (Sade’s manager) into a fountain near the Colosseum in Rome because he was jealous Barrett (his crush) was dating her. In Strange’s telling, they had all been clubbing with Grace Jones and while he thought about pushing them in, they screamed at him not to and he was relieved when he remembered they had all the night’s cocaine in their pockets!

In 1980, David Bowie, accompanied by Coco Schwab, visited The Blitz club and personally picked Steve Strange to star in his “Ashes to Ashes” video, directed by David Mallet and hailed as one of the most iconic and expensive videos of the time (though conversely, some people view the video as the death knell of The Blitz). Strange invited Blitz Kids Elise Brazier plus designers Darla Jane Gilroy and Judith Frankland to join him on the shoot and they were responsible for their costuming. Frankland’s gowns, particularly the black wedding dress worn by Strange, had recently featured in her ‘Romantic Monasticism’ degree collection. Bowie’s “cunt in a clown suit” look as described in Sweet Dreams, was his idea. You can spot some of the sets that originally appeared in the “Space Oddity” performance Bowie did on The Kenny Everett Show in1979 where he met Mallet and invited him to make music videos for him, but the real genesis for the “Ashes To Ashes” video was Mallet’s similarly solarised Hot Gossip video filmed two years earlier in 1978 to Cerrone’s “Supernature”. Both videos were filmed on Pett Level beach near Hastings, where the occultist Aleister Crowley came to die. “Supernature” is a little like Jean Rollin’s living dead girls coming to life in one of his end-of-the-world beach scenes.

Hot Gossip as I love them really hit their stride when they filmed Lou Reed’s “Walk On The Wild Side”. It was shot at Butler’s Wharf, also a location in Doctor Who episodes Resurrection of the Daleks and The Dalek Invasion of Earth. Many of Hot Gossip’s signature moves are fully formed here, from slow pelvic thrusts to forward shoulder snake rolls. The camera gets in close, becoming part of the dance. You can almost feel their hot breath on your neck. Male dancer Floyd Pearce’s slow writhing on a motorcycle in full leathers and shades is just the ride you’ve been waiting for. Hot Gossip understood that the most erotic dancing is always slow; never overdone. They don’t over emote with their faces like their fellow dance troupes. They look serious like they MEAN it. Even Donna Fielding’s smile as she slightly reveals her panties under her school uniform is seductive not jolly.

“Supernature” and “Walk On The Wild Side” were the inspiration for Benny Hill’s Angels dance troupe spoof ‘Hot Gossamer’. Sadly, The Benny Hill Show was the only trickle of UK dance I saw when I was young since it was regularly shown on PBS in the States. I always found the show incredibly depressing and repressed, though one of Hill’s dancers, Corinne Russell, did star in one of my favourite childhood videos, AC/DCs “You Shook Me All Night Long”. It spearheaded one of my earliest homemade dance routines much to the bafflement of my grandparents who had to watch me precociously shake it in too much makeup and very little clothing. I’ve come to find out it was choreographed by Arlene Phillips and directed by David Mallet so my Hot Gossip influence hit early without my realising it.

Donna Fielding transforms from schoolgirl to city girl in the brilliant routine for “Hot Child In The City”. Set in seedy Soho, Fielding hits the town in a lovely baby pink outfit as she slithers up to feather-clad prostitutes and leather-clad rockers. The Last Tango In Paris poster in front of the adult movie house further underlines her passage into womanhood while the window display of Starburst magazine and Legion Of Super-Heroes comics encourages boy viewers to dive into manhood. We’re treated to more man-on-motorcycle grinding, coupled with a little illicit car sex, as Fielding is dragged by her hair down an alleyway to seal the deal. Hot Gossip are no strangers to hair pulling. It turns up again in the fantastic routine for “Stuff Like That”, possibly my favourite video of theirs.

Unlike the silken colour of “Hot Child In The City”, the costumes and sets are very minimal and completely black and white. The women are in full-on lingerie for this one. The video begins with three disembodied legs in stockings and heels peeping through a white curtained doorway. Men take the women from behind and there’s a good dose of female-on-female action too. The camera takes full advantage of the basic bleached-out set to highlight just how terrific the dancing is. You really get the feeling as they peer into the camera that they’re dancing just for you as they make love to their chairs. I die when dog-collared and chained Fielding and Pearce caress their thighs while staring straight at you. The video ends with Mark Tyme dragging Dominique Wood by the hair off of her chair to accost her in a checker-tiled side room that’s straight out of Douglas Sirk’s Written On The Wind.

In their video for The Village People’s “Sleazy” the sex gets even rougher. The styling is stark black and white in the vein of “Stuff Like That” only this time it all starts with two men entering the scene and making their women kneel before them. Afterward they head off to take one woman at once, then why not make it three men on one woman! Before you shout ‘misogynist’ it’s always very clear that the women of Hot Gossip are in control whether it’s three women ganging up on one man themselves or blatantly sitting on their faces, no one is afraid to touch or strangle each other. A track title and theme like “Sleazy” seems tailor-made for the group and I hope dancer Roy Gayle sourced all the leather, latex, handcuffs and S&M gear they’re wearing from the sex shop he worked at part time. Yes. I want it baby. I wonder if DJ Screw ever saw this number, ‘cause clearly they’re getting high on some smokin’ purple drank in the video too.

Things go purple dayglo in their incredible routine for “I Feel Love”, the best example of experimental videography they ever did. The set looks like a psychedelic pinball machine and there’s some classic Hot Gossip writhing on metal scaffolding (also expertly performed in their turquoise version of Free’s “All Right Now”). Things really get interesting when it pans to a boxing scene where women lounge sexily on leather sofas ringside. Lingerie-clad coaches prepare their boxers for battle and we finally get our male-on-male fantasy fulfilled when the guys go at it. During the instrumental breakdown the film goes starkly blue. It’s like a strobing Warhol silkscreen come to life.

Hot Gossip’s colourful routine to “Brown Sugar’” capped off their best era on the show from 1978-79. It’s pure lust from start to finish. Bubble baths, wet slides, sex with scaffolding (again) and a male dancer trapped inside a phallic plastic tube surrounded by a water orgy?! Yes, please! Unsurprisingly things went downhill when 1980 rolled around. The music and fashion simply got worse, coupled with dreadful lip-syncing and smiling. Hot Gossip were at their best with more attitude. There are a few highlights though. The parking lot street sleaze of “Another Brick In The Wall” helped me reimagine my favourite scene in The Wall when the groupies strip off in the back of an empty 18 wheeler truck during the afterparty, only in my mind the strippers are Hot Gossip girls. The Knack’s “Baby Talks Dirty” has a nice whorehouse theme. I can dig the poolside gyrations of Michael Jackson’s “Working Day And Night” because swimsuits and heels are always a wonderful combination. Their late-period best is Blondie’s “The Hardest Part”. The set design is unbelievable, a New York subway with ‘authentic’ graffiti like ‘New York Graffiti’, ‘Calligraffiti’, ‘Campbell’s Art Soup’ and ‘Don’t Eat Yellow Snow’. Nice to see Legion Of Super-Heroes make a reappearance and yes, we see you mooching around in the background, Bob Geldof.

A reminder from the Social Gathering that you must check out Heather’s latest record Glory Days, it’s a work of beautiful and heavy genius . .