Occasional Rain And Other Projects From The Pub – Liz Buckley 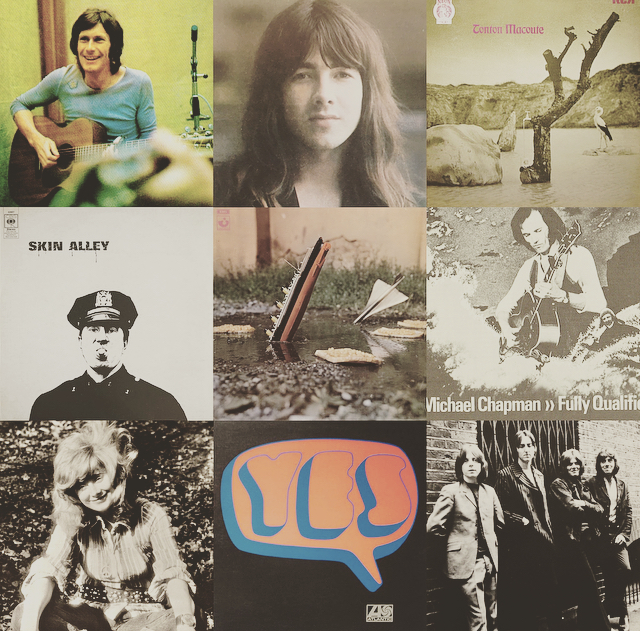 Five years ago, I was sat in a Highgate pub with Bob Stanley, having a bit of a catch up, talking records, drinking the usual ‘couple of quick afternoon pints’ that always turn into enormous glasses of white wine by 10pm, complemented by enough bags of peanuts that we wonder why we never just order dinner. Saint Etienne had by now released a volume of their long-running ‘imaginary jukebox’ series for Ace, this one celebrating the stomping sounds of the Dog & Duck boozer in Soho, as favoured by the Heavenly crowd. Bob swigs his large wine, puts it down carefully and says he’s had an idea. Always a bit of a moment. Him and Pete have been mulling it over for a while. Always the case. (Sometimes, since childhood). And I promise you, unbelievable levels of fine-tuning is what’s meant by ‘mulling’.

Bob then says something that frankly no one could have predicted: ‘What about a compilation of 1970s UK prog, the stuff neither of us thought we liked at the time, cos recently I was stuck in this record shop up North in the rain and was forced to listen to it for hours on end cos I couldn’t leave… and it was actually surprisingly great. Bands like Camel… And Gong’. My eyes widened. Now Bob is a man who’s brilliant at pitching compilation ideas, but this pitch was off-duty. And it says a lot about how much I trust Bob (and nothing to do with the pints of wine) that I enthusiastically took the idea back to the office the next day to discuss with the Ace team.

I’ll admit it wasn’t an easy sell to the others, and there has to be consensus. In the cold, sobering light of day, it’s frankly weird. But I am lucky that Ace trust me to see ideas I believe in through to completion, and I haven’t fallen on my face just yet. Although there’s always time. ‘As long as it’s CD only’ was the proviso from marketing, play it safe. Quick chat with Bob… we decide it will probably sell better on vinyl than CD… Some winning smiles later and we’re doing it on vinyl. We’re both lucky, and persuasive. Thank you, Ace.

‘Bob Stanley & Pete Wiggs Present: English Weather’ was the result of this wine chat, and a long process it was in the making. Every part of the package needs to exactly reflect the concept. For the cover, Bob found photographer Peter Mitchell from an article in the Guardian about a lorry driver who would stop to take photos of interesting people and derelict buildings as he went on long distance journeys. Finding a photo and a font that quintessentially explains the music is everything when you can’t sit down with every punter and have the white wine chat – but people did understand in their droves. So much so, this month Ace are releasing ‘Occasional Rain’, Bob & Pete’s volume two of the same concept. And yes it comes on vinyl – rain-coloured vinyl.

Buoyed by the success of finding their people, Bob & Pete then pitch their follow up idea – the harder edge that took hold of Ye-Ye French pop during the Paris riots of 1968. And swiftly after that – what about America in the same year with the Vietnam protests, what say we look at how that rocked the comfy cardigan world of Bing Crosby and Frank Sinatra, who somewhat shockingly left their usual lyrical subjects to suddenly sing about the space race and bitter divorce.

Now – the ideas and the tracklists are brilliant, but what I’ve failed to mention so far is how damn hard these records are to get rights to. Or to find masters for. A fantastic wish-list to a punter most usually looks like a ‘you’ve absolutely got to be kidding me’ list to anyone who knows about music licensing. Persuading the Crosby and Sinatra Estates that this is an album they’d like to be included on needs more than a gallon of white wine, but persuade them I did. Roy Orbison’s son Roy Jr helped us get permission for his father’s dark inclusion, ‘Southbound Jericho Parkway’; another coup was the Beach Boys’ ‘Fourth of July’ making its debut on vinyl. And that’s before I even tackle finding owners of the publishing for Pete’s love of obscure French library music with the help of Google translate. Becoming seriously attached to the original tracklist is always a significant pressure to put on myself but one that really helps when persuading people why it’s essential they’re included – they don’t want to see me cry.

It’s also a series where you’re never off-duty. Bob often sends me pics of a font he’s seen, like on the back of a lorry for their ‘Three Day Week’ compilation, and it’s a real thrill if a photo you suggest ends up being one that gets featured. The ‘State Of The Union’ cover research led us to a series of photos called ‘Documerica’, commissioned by the Nixon government to show the nation at the end of the sixties… a chimney pipe pumping lead over a young family playing in its white picket fence garden under a blue sky couldn’t have been more appropriate. It’s a series that leads you to speak to artists and heroes, to borrow original master tapes from vaults to get the best audio we can, to hunt down perfect visuals and one that supports record shops too, as we give consignments of signed photos to Monorail, Spillers, Jumbo and more to encourage people to support their local high street indie. The whole process could not be more rewarding.

And it’s also one that always ends up in the pub too. God bless Bob & Pete.

‘Bob Stanley & Pete Wiggs Present: Occasional Rain’ is out on Ace Records on May 29th 2020