The Rhythm of the Road – Ogmios School of Zen Motoring 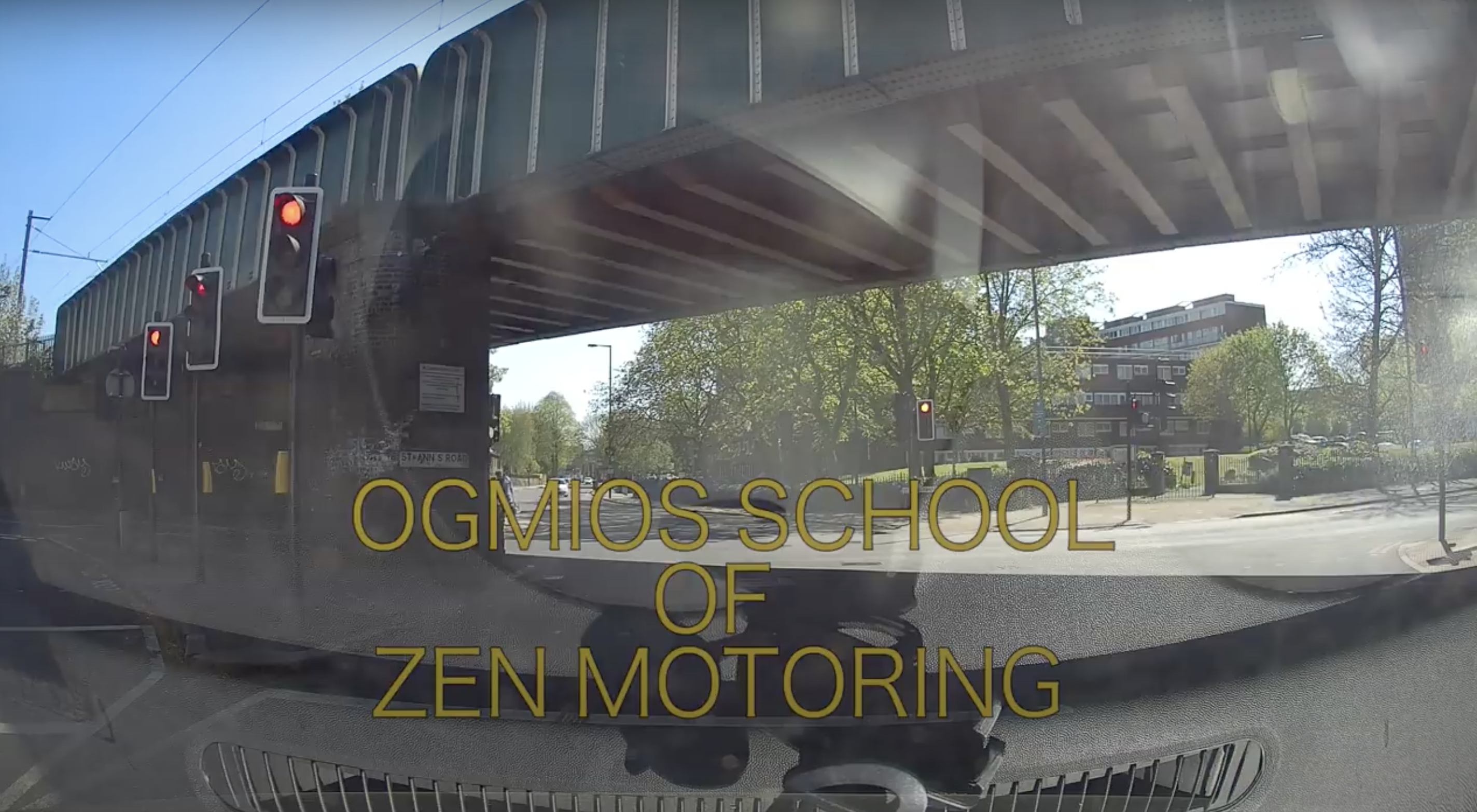 One of the biggest questions raised by lockdown is what happens next. And specifically, will we all just go back to old ways of living. Is it possible to change the pace we were all hurtling along at before everything stopped, chasing those daily goals irrespective of the effect on our mental wellbeing? Is it possible that we can find a different pace of life, a gear that encourages a sort of public mindfulness? And is that even possible in our mega built up, super pent up urban environments?

Maybe there’s already an answer out there. A couple of weeks ago, we were alerted to the Ogmios School of Zen Motoring. If you haven’t seen the two episodes currently online, please give yourself some quiet time to watch them. The premise is very simple. Accompanying film shot from the dashboard of a car, battle rapper/teacher/beacon of positivity Ogmios verbally navigates the streets of North London and humbly documents what he sees. There, pressure points are turned into curiosities and quick acknowledgements from fellow road users are received like monumental marks of respect. The whole thing is delivered with a kind of hypnotic positivity, one that mutes out the chaos and fury of a congested Hackney and replaces it with something more akin to directors commentary on a BBC4 slow travel film.

As the chaos of spring 2020 piled on, these films rapidly became a Social Gathering obsession. So we decided to track down Ogmios and talk to him about them.

How did you first find the rhythm of the road?

I think I’ve always been quite an easy going driver but it took a good few years of driving experience to start getting a feel for the natural flow of things. It’s an ongoing quest so I’m still looking for the perfect rhythm of the road. Hopefully we can all find it together on electric scooters.

For most people, driving in central London forces their simmering cauldron of rage to occasionally spill over into a torrent of deranged abuse. You have managed to find the beauty in small, thoughtful actions. Has that always been the way?

There are indeed people driving around London ever ready to let out all of their frustration and anger over an indiscretion and some even seem to drive looking to provoke a confrontation. That can be any of us on any given day. I’m not immune to feeling annoyed occasionally but over time I’m striving to cultivate the mindset that can have a larger perspective in those moments. The more people we have cultivating that mindset the more we can neutralise the anger on the streets. Most of the time we are all cooperating and getting along in many ways we take for granted and it’s a beautiful thing.

You tag that the films are created on ASMR Dashcam (Autonomous Sensory Meridian Response – a feeling “compared with auditory-tactile synesthesia”). Does that accurately describe the sensation of watching these films?

I put the ASMR tag on the videos in a slightly tongue-in-cheek way but I do think they can bring about that sensation for some people. I’m not using binaural mics like professional ASMR practitioners but I do turn up certain sounds at certain points for the ASMR freaks, like the sound of my indicators or the sound of my car disintegrating as I drive over poorly maintained streets.

Is the double wave from a fellow road user the ultimate mark of respect or is there a higher form of thanks?

I think it’s definitely a very high form of thanks but you can have the triple wave which is much rarer and slightly higher in the showing gratitude rankings, although adding more waves after that can actually be risky as it can start to look sarcastic or demented. You could also have the bow or full prostration which I’ve not seen yet on a zebra crossing or the earnest pointing followed by fist bumps to the heart. The possibilities are endless.

After driving through a Purim celebration in Stoke Newington, you start musing on the idea of your own road festival – Zenim. What would that be?

I think a Zenim festival could be great in North London with some negotiations. Our zen demands would just be that we can play some dub, ambient and jungle music here and there and organise meditation circles in the middle of the street. Purim with a zen touch.

How do rap battles / teaching prepare you for life on the road in London?

Battle rap is a good training in how to maintain composure in the face of hostility. Teaching disengaged teenagers in a PRU (Pupil Referral Unit) in particular has helped me access deeper levels of patience and humility.

Are their other cities (or bits of London) that you long to explore from the driving seat? What would you look for ?

Maybe somewhere in Japan, I would be interested to see how their different cultural norms and etiquette translate on the roads. I would look for new ideas and levels of considerateness that I could integrate into my driving.

Ogmios was a Celtic deity surrounded by followers each willingly chained to him. Do you see a future where your own followers help to create a city of properly thoughtful road users?

I’m definitely up for starting a driving cult. Then, when we have enough members, we can all drive together very considerately in the direction of Ogmiopolis and start a new society there.

The films are very reminiscent of the slow TV broadcasts on BBC4. Do you think they reflect a desire for slow travel – or a kind of mental wellness travel – in our most urban environments?

I think they reflect a desire for content that is immersive, relaxing and interesting. I myself like to watch videos of psychogeographers wandering the city or mudlarkers wading through rivers. It definitely satisfies a natural urge to explore and collect and contemplate our environment and its different layers.

Any lockdown tips for where to still get a coffee and sandwich safely on the road ?

Coffee is too stimulating for me, it has me bouncing off the walls. I only have one in an emergency. I stick to the herbal teas. I’ve just been making my own herbal teas and houmous sandwiches in lockdown.

We love your other TV shows on YouTube. Any tips on the greatest Kung Fu movies to tune into and what’s the best herbal tea accompaniment?

Just watch them all. I love ’70s kung fu films in particular but I can’t remember any names. They all merge into one big Drunken Invincible Snake Iron Fist in a Shaolin Eagle Monk’s Shadow. As for which herbal tea it depends on the time of day and other factors. If it is an earthy mid-afternoon and the autumn leaves gather at your threshold then go with a Nettle tea.

How can people become more Ogmios?

They can go bald and get into herbal teas and only drive bangers.