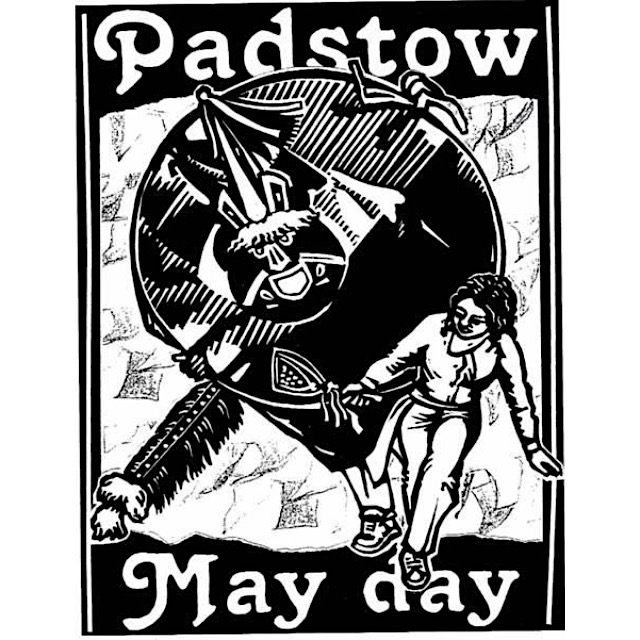 “So the scholars say it was one of our religions when we lived in caves… I can’t say whether its druidic or neolithic, but you’ve got to admit this Padstow Oss dance is pretty terrific.”

I’ve been fascinated with Britain’s May Day traditions for a long time. In any normal year, there are two distinct types of celebration that stick in the mind. In London, there’s a procession run by the trades unions along with a lot of proper old school communists and socialists. It usually starts at the Marx Memorial Library in Clerkenwell. A large part of it is very pro-Russia, there’s lots of handmade banners and people marching carrying pictures of Lenin. It’s quite nuts but it’s still takes place yearly. This year they’re running a version of the procession online.

Then there’s the very different, very subversive kind of celebration happening in Padstow. Obby Oss Day is a folk custom and one of the most famous May Day gatherings in this country. Possibly part of the Gaelic Beltane festival, it’s one of the oldest fertility rites in the UK. It’s also a resurrection story. The Oss dies at the end of the day to come back to life the following year, reflecting a natural, seasonal life cycle rather instead anything in the Christian tradition.

There’s something odd and modern about the look of the Obby Oss itself. It’s this weird black disc, such an alien looking object in this picture book fishing town. We don’t really expect to see things like that from this country in a way, it’s such a timeless object and a strange mix: super-old fashioned but also super-tech; like science fiction but simultaneously ancient.

The event doesn’t seem to have changed since the invention of photography or film. Any footage of it looks the same, and the music is the same. And any time you ever see the Obby Oss celebration on film, Padstow looks glorious. I’ve never seen footage of it in bad weather. Alan Lomax’s film also shows this tradition as a very male preserve. Back then, pubs would mainly have been populated by men and the film reflects that. Pubs have obviously changed but I’m not sure how much has changed with the tradition itself.

I first became aware of the Obby Oss through an amazing book of British folklore and ritual by called Once A Year by Homer Sykes. He’s a photographer who captured Britain in the 1970s; he’s  still taking pictures now. It’s his photographs of customs practised around the country but there aren’t lots of people involved; it’s just people in fields and villages doing these odd, old-fashioned looking things in places outside London, where many pagan traditions have managed to survive.

On the day, you hear the same music repeated constantly. The song in the film loops on and on for twelve hours straight, it’s insistent. The repetitive drum beat that underpins the whole thing is incredibly rhythmic and hypnotic. You can see the effect it has on the two boys in the film. They’re practising for playing the Oss and they’re properly going for it. It’s like they’re on E, completely lost in music.

Although Padstow still feels like the most sacred of all of the May Day events, it’s now incredibly packed when you go. The idea has spread a lot further than the surrounding towns and villages. It’s a magnet for people from all over, much like the Lewes fireworks. I think a lot of people think these traditions are dying out but partly because of those changes places like Cornwall and also because of the internet, they’re stronger than ever, in terms of audiences and understanding. Local people end up wanting to do it even more to assert themselves. There’s a certain amount of chaos in that assertion of identity, it channels ideas of ancient identity that aren’t connected to the church. What you see is something that’s seemingly out of control in a way that strikes a real contrast to any of the traditions associated with the church or state.

There was a point where the political and pagan versions of May Day met in central London in 2000 when the huge anti-capitalist protests took place. You had the Guerrilla Gardening people putting up a maypole in Parliament Square and planting seeds all over the place. A huge part of it was about stopping the city and holding an eco-rave, about people getting off their heads and dancing to techno. That act itself reflects some of the movements of the boys in the Alan Lomax film.