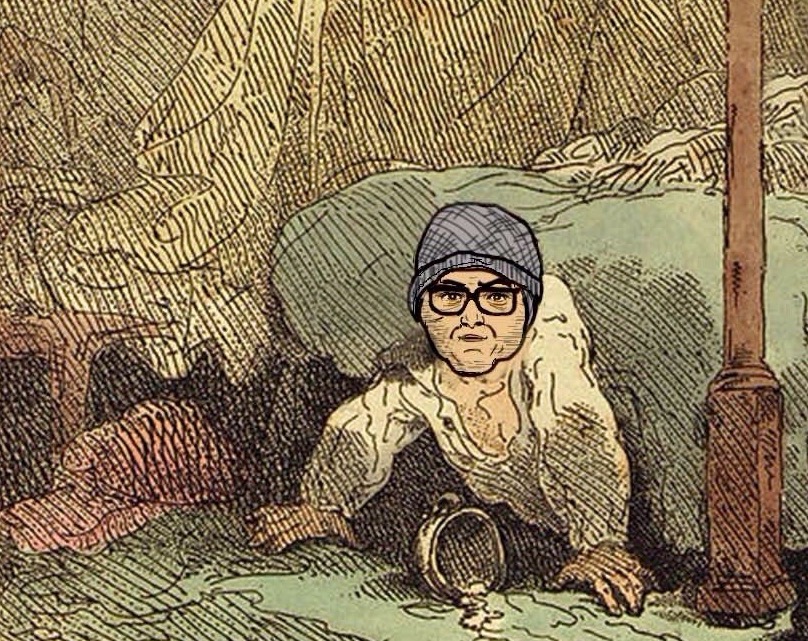 I don’t know how to break this to everyone, but you’ve got your infamous seducer metaphors all messed up. He’s not Svengali, he’s Rasputin.

There’s been loads written about Cummings over the last few days. His failed airline startup during a mysterious few years in Russia. His hiding in a bunker on his dad’s farm for a couple of years between working for IDS and Gove. The fact that he hates the elite despite having a 30 grand a year education, with both him and his wife heirs to massive fortunes. The fact that despite him blogging about how wasteful EU subsidies for famers are, he personally claimed £235,000 in EU farming subsidies. His dodgy links to recently awarded NHS contracts and Cambridge Analytica. Him having zero mates when he was at Oxford, and zero mates anywhere since, which is why he claimed he had to drive 270 miles just to find someone who would sort him a sandwich. The fact that Boris Johnson can’t find his arsehole without Cummings putting his fingers up it. I’m not going to go over any of that, let’s have a look at what’s going on now.

In March, Dominic Cummings was given eight hundred million quid to set up his version of the United States’ DARPA (Defense Advanced Research Projects Agency). He has long written about how he thinks this decentralised and unaccountable way of spending money on govt science projects produces better results than more organised units, such as NASA. This, alongside the 250 million he had already secured for A.I. research is quite a lot of money to dish out to an unelected and unqualified bureaucrat.

A billion quid. Remember when a billion quid was a lot of money? Like when these fuckers gave it to the DUP so that they’d have a few more votes for something that never happened either. Well somehow, this unelected, unaccountable member of the landed gentry elite has become so important to the govt that they have given him a thousand million pounds of our money to spend on whatever the hell he likes. How?

Rasputin, a self-declared mystic and priest, turned up at the court of Emperor Nicholas II and wowed everyone by knowing a bit more about horoscopes than everyone else and having the gift of the gab. Cummings, a self-declared tech guru, has turned up and blown the tories away by showing them how to send Spotify to the TV and how to turn your phone into a remote. Rasputin told Nicolas to stop allowing his haemophiliac son to see medics, which luckily turned out great because they were giving him Aspirin, which only thinned his blood more.  They thought he must have had a direct line to God himself. Cummings showed the Tories that by using illegally funded fake facebook ads, your dickhead cousin in Dungsborough could be made to believe that Corbyn started the Taliban and that Turkey was about to send forty million migrants to Sunderland. This also worked. As it turns out, lying on social media and knowing how to get whatsapp working on your laptop bear no relation to being a legitimate tech savant.

At yesterday’s pathetic address, one of Cummings lesser spotted lies was that he has been blogging about corona viruses for years, like he was some prophet that saw this all coming from miles away, which somehow explains why we’ve got the worst numbers on the planet. What he didn’t even know was that anyone with a tiny bit of tech savvy could check his blog and see that he’d made these inserts on the night of 14 April, the day he says he came back from Durham.  Total lies. I mean we know that the whole press conference was a series of them, but here he was just throwing another one in, one that no one asked for, no one was bothered about, one that was meant to make him look cleverer than he is, and one that could be easily checked. The man is a complete fraud, but he’s surrounded by a court of bumbling idiots who have never had to check a CV, correct a mistake, or ever apologise for anything in their lives.

The status afforded Rasputin made those around Nicolas fear that they’d become laughing stocks, that everyone would see the state of their court, and they could now sense revolution brewing. The aristocracy feared for their future, warned Nicolas to banish Rasputin, but as this was never going to happen, one day Count Felix Yusopov, from a family even richer than the ruling Romanovs, took matters into his own hands and with some of his mates set up a plot and killed the mad monk himself. An interesting fact about Yusopov is that he’s actually Bullingdon. He left St Petersburg for Oxford, got initiated into Bullingdon, set fire to a few fifties in front of tramps, then set up the Oxford Russian society before going home. Seeing the state of everything he got the arse with the Tsar and and killed Rasputin. This is the equivalent of Gideon Osborne finally becoming so fucked off with Boris and Gove that he kills Cummings to try to prevent riots in the streets.

The good news is that the killing was seen exactly for what it was. A pathetic attempt by the status quo to protect itself from an increasingly tense public. Michael Gove going on TV this morning to say that yes, he too has gone for a drive to make sure his eyes work, and Boris pulling out a pair of glasses in his briefing yesterday are the equivalent of Nicolas saying of Rasputin ‘The holy are always slandered’. A few months later, the Russian Revolution kicked off regardless, and not so long after, Nicolas was dead. Without Rasputin there would have been no revolution, which is something to cling onto as our legion of old Etonian gangsters continue to lie in our faces and laugh away the misery they’ve caused.

The comparisons with Rasputin are endless. Both Cummings and Rasputin are weird finger sniffing outcasts who turned up in the middle of an outdated corrupt regime and made the elite feel better about themselves while completely taking the piss and not giving even the slightest of fucks about the uproar they caused.

Rasputin wandered about the palace wearing ill-fitting stinking old rags telling everyone to fuck off, so does Cummings

Only time will tell if there is more to come. If and when Cummings falls, will that really spell the end for all these wronguns?… and if so, will he go back, edit some old unread blog from 2012, and say that actually, that was his plan all along?

With thanks to Cold War Steve whose work below we cropped for the main image above – dude has been on fine form this weekend.