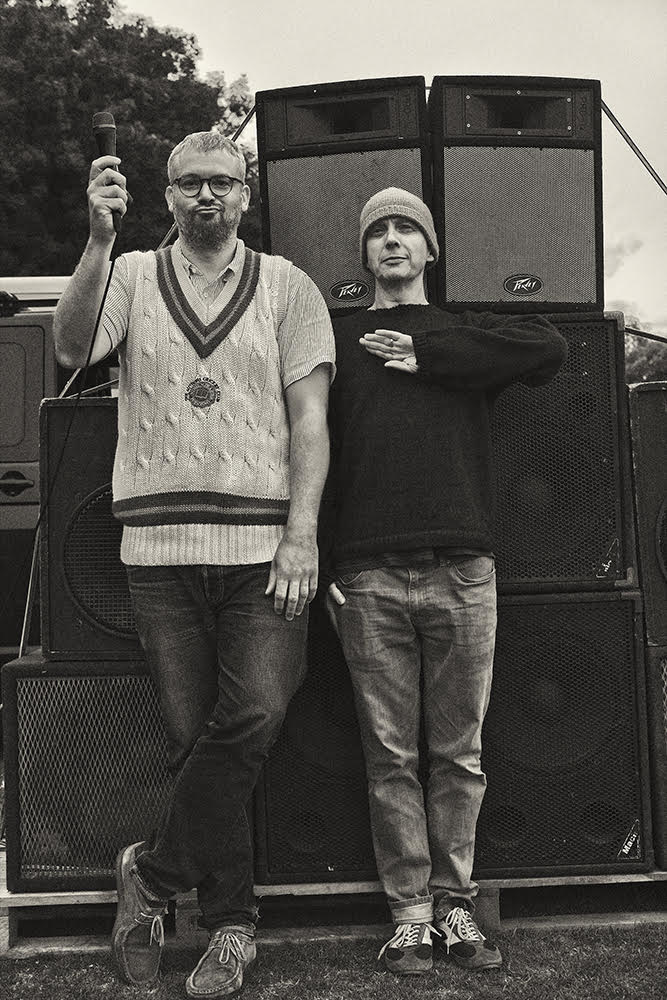 The vehicle is a huge grey pickup. A farmer’s car, a hillbilly tank. Over the course of the last few summers it has taken a wild and varied cast across the country. Poets, musicians, svengalis, writers. Texans with big blonde hair and high heels, visionary writers with a tarot deck in their shirt pocket and a box of their latest novel, the legendary rock’n’roller with the biggest heart in the world and the hair made of Viking gold. What’s in the boot says everything. A guitar and a keyboard, a few boxes of books, records, merch. A kit bag full of cricket caps and sweaters with their insignia like those on the mystic’s cards—Elephants and swords, acronyms and symbols. Gene Clark and ‘The State of the Union’ on burned CDs, a thesis on baggy country, a bag full of beers almost as strong as wine. Four hours. One stop at a pub on the way, fish finger sandwiches, chips, salad cream squeezed out of a little plastic sachet, cold beers, this time in a glass. The Boss is driving. She always drives. Her buddy is in a green jumpsuit in the passenger seat. It’s these two who have planned it all. The novelist-mystic is in the back with one of The Boss’s poets. Half ten in the morning and the first ring pull goes off like a little pop-gun.

I’ve been here before and each occasion slips into another. I’ve arrived at this same spot at the top of the hill, unloaded, found a bed—this time in a granny annex out the back of someone’s house. The Boss unpacks in her room, The Jumpsuit does the same next door. It’s fast, perfunctory. Things to do.

There’s a field set aside on the estate. It’s famous for its history of hippiedom, arts education, sustainability. Tonight the action is cricket. It’s that early summer thing—there’s late light and the game can start whenever it needs to, or so it seems. The players pitch up, change, begin the game. The result is unimportant, the play is unimportant. It’s the game as it should be, as it exists in the imagination—suspended in a sense of itself as a one-off, no leagues, no fixture list, there’s barely a result. Before most of the players can get out of their whites, the clubhouse is full of speakers. A PA straight out of an image of Notting Hill Carnival. The music begins and the bottles behind the bar start chattering and shuffling along the shelves. The pool balls on the table are shaking into the pockets. Somewhere an ear bleeds.

Wake up in nothing but a cricket jumper. The Jumpsuit and The Boss are already gone. The novelist is four readings into his turn interpreting the cards for people in a record shop at the top of the hill. Looking for something to help but it’s easier to find a lute in this town than a real sausage roll. Interview with an English folk singer and after that, the dark star of Denton, Texas. Bad gospel and good boots. Country music. He’s too quick for me and anyway he’s off with his guitar to sing in church that afternoon. What else have I witnessed under those same lights? Synthesisers and harps and flutes… old, radiophonic England. Like I say, the times around here are slippery.

There’s a bar in a different field. People from a previous life, which feels… odd. What was it we had? Buckfast Negronis. A disco in an old school gymnasium and a bucket outside full of ice and cans. There’s this guy I know, plays bass. Funny fucker. Somehow he’s here. He may have been in the truck for all I know. He’s dancing under the broken basketball ring. And it’s true he had the big laughs that afternoon, he should feel good about things. It was all the Mick Hucknall stuff he was doing, that was his best material. Big Mick’s sex factory. Sat outside the pub on the estate, the novelist and the poet in tears, a famous stand-up on the next table looking over every few minutes, puzzled. How to kill an afternoon.

Wake up on The Boss’s floor. What was it that was so funny? Next day—Same. I can hear a voice in my head, or more accurately, an accent. I couldn’t tell you if it was Airdrie or Glasgow. The lines of a novel, half-sung, something about a swan, and Rimbaud and the cure for art. Then a harmony line, in a new voice, about fucking and the forest. The stage is set in a room above a pub for the poet. I’m pinned to the back of a full room listening to her speak. There’s nowhere to go after but down… the stairs I mean. Wood panelling, a couple more beers. Book talk. A strange and drunken journey back to the fields. Music and sunlight. Scattered hay bales. Finish things off in another pub—The Boss, The Jumpsuit, the poet and one or two others. The funny fucker is the last to say yes to a drink. One last walk down the street, down the hill, into high summer. I am bound to say this—I didn’t have any of what came to pass in my cards.

Photo of Will Burns and Roy Wilkinson by Stephen Parker.

Seachange in Totnes is one of the UK’s most inspiring and exciting small festivals. Run by a bunch of truly brilliant souls, it is somewhere very close to The Social Gathering’s heart, but, after cancellation then losing out on government support this year, their future is in jeopardy. Please support their Crowdfunder to pay off debts accrued by this year’s cancellation and start looking forward to returning in the future.