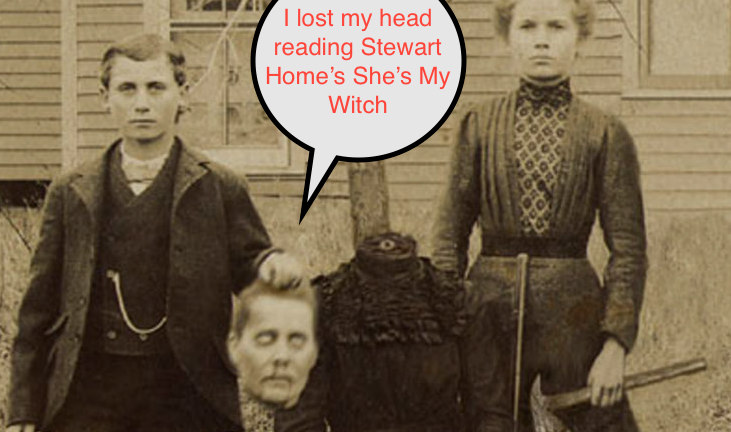 My novels often take their titles from songs and mention music that grooves me. The latest She’s My Witch is no exception on this score. Sharing their experiences of tarot, film and music is a core part of the relationship between the book’s two main characters Martin and Maria. When they’re not together they’re obsessively sending each other songs and film clips. The Loving Cup is a collection of tunes that Martin and Maria might have spun or mentioned during the course of the book, some of them do appear – such as You Got To Crawl To Me and Chinese Rocks – though the majority aren’t mentioned in the novel (but could have been).

Martin digs sixties soul and pop, freakbeat, seventies punk and glam, funk, house, go-go, electro and even a little folk on the side. To make the writing easy I gave him a music taste similar to my own, and he like me could get down to everything on this list. Maria who is six years younger than Martin is obsessed with sixties soul and garage rock, and punk in both its classic seventies and later hardcore varieties. She’s doesn’t share Martin’s taste for everything from disco to minimal techno and he doesn’t like the hardcore punk that grooves her. There’s no hardcore punk here because this is more Martin’s list and he narrates the book. Since the story ends in 2014, ‘Up Went Nelson’ wouldn’t have appeared in it…. It’s here because lately I’ve been listening to this huge Irish hit of 1966 that celebrated the destruction of the British colonialist Nelson’s Pillar in Dublin. This action and the blowing up of the Walker monument in Derry in the seventies have parallels with the toppling of statues in the wake of George Floyd’s death this year. Had I continued Martin’s story through to 2020, I’m sure he’d have been blasting out ‘Up Went Nelson’, an Irish folk tune recorded by a group who met each other while teaching in the same Belfast school.

Although I could have made a playlist from songs mentioned in the book I decided not to do so because Johny Brown from Band of Holy Joy had me on his Bad Punk ResonanceFM show talking about She’s My Witch, and he picked a bunch of tunes to go with my talk, including some from the novel. So he kicked off with Kip Tyler’s ‘She’s My Witch’ and ran through a whole bunch of floor-shakers I might have used here including The Heartbreakers’ ‘Born To Lose’ as performed by their bassist, Billy Rath’s ‘Street Pirates’, ‘No Lip’ by Dave Berry, one of my all-time favourite northern soul tunes in the form of Cliff Noble’s ‘My Love is Getting Stronger’, ‘Dr Rock’ by Apple, ‘Ain’t No Greens In Harlem’ by The Vibrations and ‘Gatecrasher’ by The Gorillas. So in the place of ‘Born To Lose’ here there’s ‘Chinese Rocks’ by The Heartbreakers, and rather than ‘Gatecrasher’ there’s ‘We Didn’t Kiss’ by The Clique, a sixties band fronted by The Gorillas’ Jesse Hector.

There are so many places I could have gone with this playlist. I wanted to include something by Alan Lee Shaw when he was in The Rings, The Maniacs or The Physicals – but in the end that didn’t happen. Nor was it possible to shoe-horn in Jayne County’s Fucked By The Devil, although that was part of my original plan. It would have been possible to represent Jesse Hector via Crushed Butler or another Gorillas tune such as New York Groover, but Gatecrasher is my favourite and I’m always hoping that one day the local London TV footage of that single being recorded that I saw broadcast when I was still at school will resurface. Likewise I could have wandered off into the world of Heartbreakers related bands such as The Corpse Grinders and The Demons. The death of Heartbreaker’s guitarist Walter Lure a few days ago made it even more tempting to do that and meant there was no way I was going to use The Ramones version of Chinese Rocks rather than the one here.

The Loving Cup is an eclectic playlist rather than just getting down in one groove because I wanted to reflect the breadth of She’s My Witch and there are also plenty of non-punk sounds I considered but didn’t run with in the end…. Eddie Bo’s ‘Getting To The Middle’, ‘Wicky Wacky’ by The Fatback Band, ‘Jam On Revenge’ by Newcleus, the instrumental version of ‘Have You Ever Had The Blues’ by Travis Wammack or even Billy Butler’s ‘Burning Touch Of Love’. I even used the latter as the title of the book for some of the time I was writing it. Needless to say there are tunes I love that have yet to find their way online: ‘Soul Mountain’ by The Sand Pebbles being an example of one I can’t find on YouTube. I had a reader complain they couldn’t find half the tunes in the book on Spotify, most are on YouTube. I was asked to create a playlist from Spotify but find that platform a bit limited, so asked if I could do YouTube – but regardless I’m still limited to what I can find where I’m compiling.

I could add endlessly to the tunes here but as they stand they give a pretty good flavour of She’s My Witch. However, if you just wanna party then most of what’s here has got a thumping monster beat, although I do slow things down in places. So enough of that, it’s time to put on your dancing shoes and groove y’all! But just in case you wanna order a copy of She’s My Witch, you can do so here