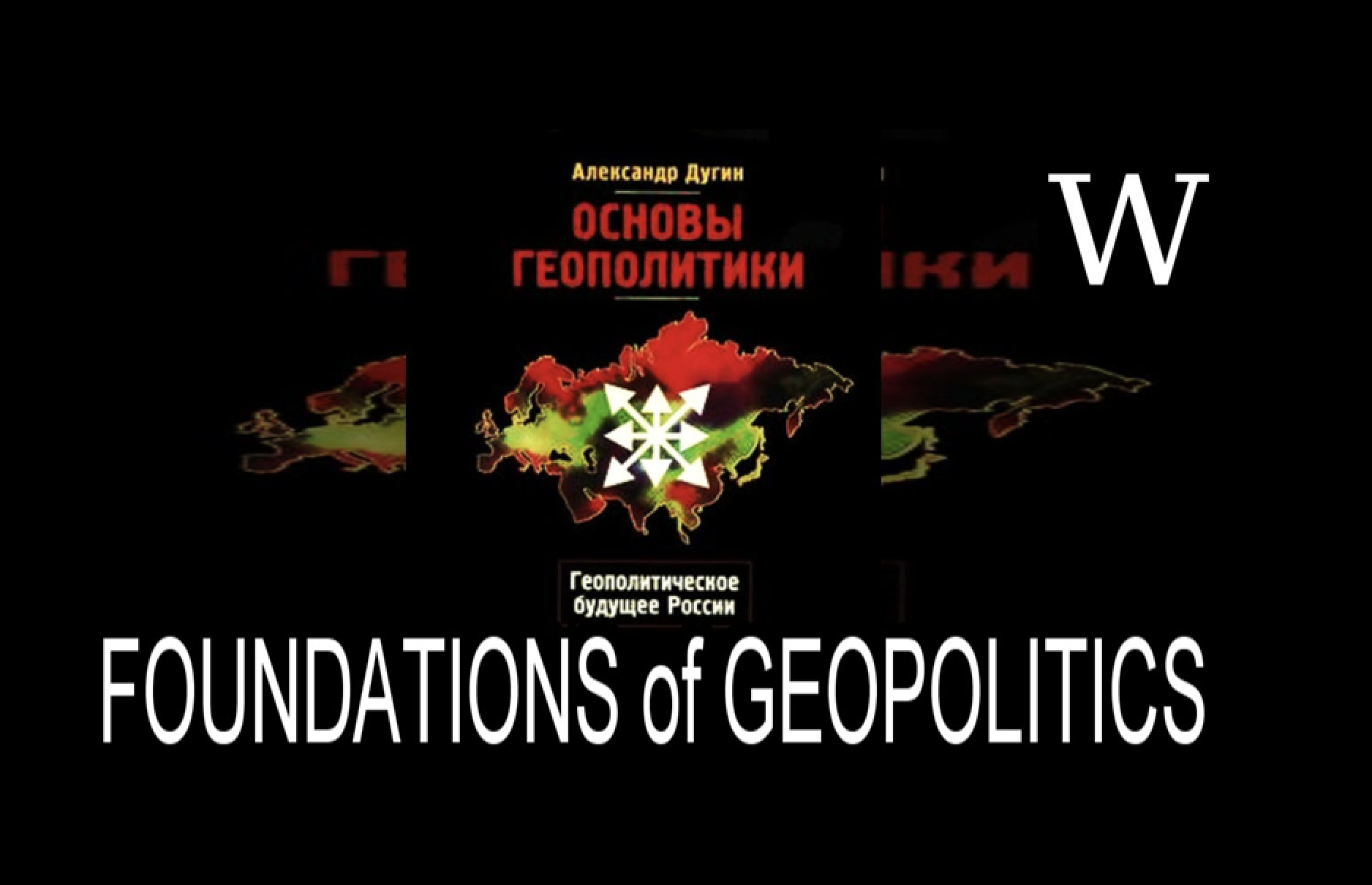 Sit down, I’ve got some bad news. I hate to be the one to break it you, but we’re currently in the middle of World War 3, and we’re losing.

I know that you can’t see any war, and yeah you think I’m the wrong’un, but the thing is the game has changed; the weapons, targets and theatres are all much different to those used in past wars, so it’s no longer easy to recognise a world war when you see it. It’s not you, it’s them. Every advance in technology has led to unimaginable, unrecognisable warfare, and the early adopters tend to win the spoils. From Archimedes destroying the Roman fleet with his claw, catapult and death ray, to operation paperclip and the H bombs at the end of the Second World War, wars have always been won by the most technologically advanced participant.

At the end of the 90s, the Russians and the Chinese both released military planning texts that would shape the modern battlefield. Foundation of Geopolitics was written by Dugin and executed by Surkov (both mates of Cummings, who coincidentally left Russia in 1997, the year of the book’s publication). Here are some of its stated aims:

– France should be encouraged to form a bloc with Germany, as they both have a “firm anti-Atlanticist tradition”

– The United Kingdom, described as an “extraterritorial floating base of the U.S.”, should be cut off from Europe

– Russia should use its special services within the borders of the United States to fuel instability and separatism; for instance, provoke “Afro-American racists”. Russia should “introduce geopolitical disorder into internal American activity, encouraging all kinds of separatism and ethnic, social and racial conflicts, actively supporting all dissident movements – extremist, racist, and sectarian groups, thus destabilizing internal political processes in the U.S. It would also make sense simultaneously to support isolationist tendencies in American politics”

– Iran is a key ally. The book uses the term “Moscow–Tehran axis”

You think I’m shitting you yeah? Google it, it’s all there. The thing is, Russia was skint. The US military budget was twelve times that of Russia. If you add the UK, France and Germany in, the total military budget of the empire they wanted to topple was $400 billion at the time, against Russia’s $19 billion. They had to get savvy, and they did.

Vladislav Surkov, one-time marketing exec and full-time evil genius, became Putin’s right-hand man in 1999. He created the concept of non-linear warfare. The idea is to confuse and to disrupt, not necessarily to defeat the enemy in the next five minutes. The Russians and Chinese don’t have to worry about their own 4 or 5 year election cycles, so they can play the long game as they focus on fucking up ours. It’s no longer up for debate that the Russians have backed the rise of the far right across the West, but according to ex White House Chief of Staff John Kelly, Surkov was backing both the alt-right movement and antifa simultaneously in the US, at the expense of the middle ground.

“Surkov is at the centre of the show, sponsoring nationalist skinheads one moment, backing human rights groups the next. It’s a strategy of power based on keeping any opposition there may be constantly confused, a ceaseless shape-shifting that is unstoppable because it’s indefinable.”– Peter Pomerantsev

It was Surkov who played one half of Ukraine against the other. The aims are clear, the method is to confuse the populace so much that riots and chaos cause their enemies to destroy themselves.

Meanwhile in China, two colonels in the People’s Liberation Army wrote their new versions of military strategy: Unrestricted Warfare. It makes a very similar case. Countries up against the US had to think of strategies outside the norms of traditional warfare because it is impossible to compete with their military might. In fact, the book pointed out ghoulishly, their military capability alone was a weakness, as it allowed nations to focus on other ways of destabilising it.

Their strategies are similar to Surkov’s. Topics in the book include iWar, which is all about attacking networks and satellite infrastructure.

Fast forward 20 years to today, 23rd July 2020, The Russians are testing missiles in space designed to take out satellites. The British Military just tweeted that Russia’s actions could “threaten the peaceful use of space and risk causing debris that could pose a threat to satellites and the space systems on which the world depends”. The British Military are not known for such candour on Twitter. If they had added a picture, they could have used this cover from Unrestricted Warfare (this is the biggest image we could find of this after much searching!):

Of course that’s at the Michael Bay end of the iWar spectrum. World War 3 is being played out with code, data, worms, fake news, hacked nuclear facilities, hacked power grids, hacked email servers, sleeper cell hedge funds, and as most people can’t see or fathom what’s going on, and because there are no explosions or a body count, we haven’t got a clue that we’re already in the middle of it.

Serious hacking and Stuxnet needs its own column so let’s just talk focus on the fact during this week we’ve heard that there were 150,000 Twitterbots telling people to vote leave in the Brexit Referendum, on top of the Russian millions spent on Facebook ads doing the same thing. The government have said that the people of the UK would be too savvy to fall for this stuff… When The Vote Leave Campaign have already said that their own research shows that their own social media campaign, tiny in comparison to this Russian interference, swung the vote from remain to leave. This was all a stated aim of the Russians from their own textbook. A book written 23 years ago, and we refuse even to acknowledge that we’ve been beaten by a superior enemy. We need to, or it will only get worse.

Another strategy the Chinese proposed is ‘Lawfare’ – which is to try to get a country so bogged down its own red tape as to stop it being able to function. Now I don’t want to keep banging on about Brexit but FFS. There it is again. That and the Mueller Report and all the Wikileaks related shit in America, they’ve all dominated the news cycle for years, turned families and communities against each other, moved from one court to another and back again at a combined cost of who knows what while weakening all Western alliances, knackered NATO… and yet there is even worse to come.

There’s one more strategy that the Chinese define in their book, one that we’ve only seen the first ripples of… Economic Warfare. There’s some argument as to whether sovereign wealth funds already had their hand in the crash of 2008, but the scale of this could be enormous and cataclysmic. The Chinese and Russians control hedge funds worth billions on Wall St, They’ve been there for decades now, growing, using more and more advanced AI and algorithms to trade and ending up with huge positions in most of the large corporations on the planet. What if all of this wasn’t done to generate wealth but to destroy it? What if it’s all part of a long game? Famously, In the 1970s, when Chinese Premier Zhou Enlai was asked what the long term effects of the French Revolution had been, he answered, ‘It’s too soon to say’. Twenty years of hedge fund growth is fuck all in a thousand year plan. The Chinese think the rise of the West is a few hundred year blip that’s about to end.

At some point in the future, maybe tomorrow, maybe in years, the Chinese and Russian governments will suddenly demand that their hedge funds sell everything, all of their Google and Amazon and Uber and Microsoft and Walmart stock; all at the same moment that a global fake news campaign starts a genuine panic, announcing that the CEO of the Federal Reserve has just leapt from the top floor of the New York Stock Exchange and that the Koch brothers have just detonated themselves inside the Gucci store on Mulholland. This will in turn trigger all of the less advanced automated trading systems on Wall St to panic sell. Every asset manager on Earth will be bailing at the same time. If this happened, the crash would be so huge that there will be no recovery or bailout possible. Everything will be gone. Not just the assets, but the methods of resolving them. A complete reset to position zero.

World War 1 was a game changer because the kids who (history tells us) went off happily whistling to it, had no conception of what was waiting for them. Their dads had participated in wars where besides the odd siege here and there, the longest battles had been two days max. They went wearing stupid hats and bright red trousers, singing songs, brandishing bayonets expecting some noble scrap, like something arranged between two schools in the park. In the meantime the industrial revolution had happened.

For the first time in history, munitions had been created that could level centuries old forts and entire villages in seconds, and the poor lads that were sent to fight got blown to bits by the million. Trench warfare became the norm, battles went on for months, hundreds of thousands of casualties were racked up on single days, and each subsequent battle broke the last’s record for the amount of artillery used, the length of time it dragged on for, and the number of souls it swallowed. This was beyond anyone’s comprehension. No one had ever seen anything like it, in real life or fiction. It was totally alien. Back in Blighty no one could believe the horror stories told by the lucky ones who made it back from the Somme and Verdun and Passchendaele. There was no frame of reference.

Here we are again. No one can get their head around what’s happening, this time by design. The industrial revolution had changed warfare so much that it was unimaginable at the time, and the technological revolution has done it again.

Years from now history books will agree that throughout 2020 we were already in WW3, and at this stage in the game from our perspective, all seemed lost.

If our so-called leaders won’t even acknowledge that this is happening, how is that going to change?