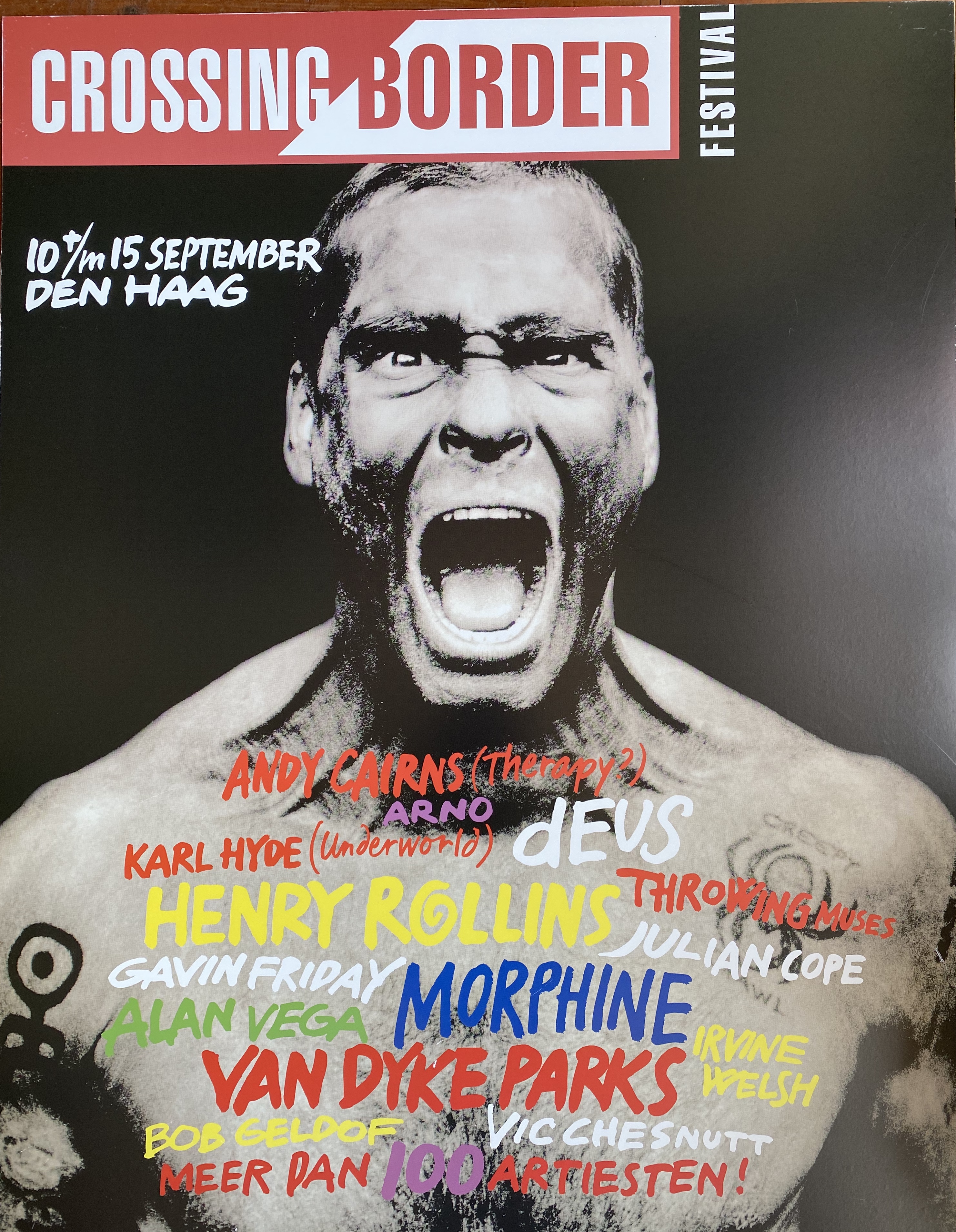 Dig if you will the picture. It’s 3.20am and about 200 of the most forward-thinking, risk-embracing, party-loving publishers in Europe (and a smattering of bemused Americans) are dancing to Tim Burgess of The Charlatans who is dj-ing at the infamous Saturday night after-party at a certain festival in The Hague. They are joined by a host of international writers and musicians, scraping together stray munten (drinks tokens in the Netherlands) for a final beer. There is a collective unwillingness to end the party, cut short the camaraderie, and brave the inevitable rain out on the streets.  There is some (self-inflicted) confusion about how you will make it back to the hotel from this bar which a Dutch publisher tells you, in English embarrassingly way better than your own – some 12 hours into that day’s festivities – is on a side street off the buzzy main square in Den Hag, Het Plein. You tumble out the door with three Spaniards (always a bad sign), an Ecuadorian writer (whose name no one can remember), two members of a Flemish postpunk trio, a Booker Prize winning writer covered in glitter speaking Russian, and Necrobutcher from Norwegian Black Metal legends, Mayhem, who appears terrifyingly sober. Welcome to Crossing Border, the most inspiring and frequently surreal festival of music and literature on the European continent.

For almost thirty years, father and son dream team Louis and Michel Behre, have produced this festival in numerous theatres, bars and glorious places of Calvinist congregation in one of northern Europe’s more underrated cities, The Hague. An ex-professional footballer (Den Haag, naturally), bookseller and aficionado of the Beats, Louis is the most convivial, generous and forgiving of hosts. He knows everyone; moves about the festival like a crack marine, searching out the vibes in the venues scattered about this damp but elegant city. Each year, for twenty years now, Louis has encouraged me (and various other conspirators like Jamie Byng of Canongate and Oscar van Gelderen of Lebowski) to recommend the best emerging writers (and some musicians) to come and perform on the various Crossing Border platforms. The spirit of the festival is inclusive and superficially anarchic but run with the precision and dedication of a small team who care passionately about literary endeavour and its fertile correspondence with music. Its alumni are not so much the Great and the Good of Hay Festival, more the Good, The Bad and The Ugly of Den Haag. Unlike some of their more conservative UK peers, the Behres are naturally progressive, attracted to youth, diversity and a programme that represents emerging international talent.

Faber Social, the imprint I created and ran for many years with its events programme which experimented with the alchemical space where music meets literature, would not exist without Crossing Border; without their pioneering programming I would not be the publisher I am today. I hesitate to speak on their behalf, but I suspect many other British and European publishers would say the same. For three, sometimes four days every year in the challenging conditions of a Northern European autumn (November: ‘the month of the drowned dog’, as Ted Hughes wrote), The Hague is given over to a congregation of several hundred publishers exchanging literary currency at ‘The Addict’, an inclusive gathering of the most adventurous minds from across the continent and beyond. This is where I first heard about, met, and acquired English language rights in the wunderkind Dutch writer, Marieke Lucas Rijneveld, whose debut The Discomfort of Evening (Faber) is now celebrated by the International Booker Prize. This is a place where deals are made with the instinct and abandon no longer evident at the Frankfurt Book Fair, where it was once the truism that no good deals were done before midnight. This is also a place that, like so many vital cultural institutions around the world in this dark virus-infected Spring, is under threat of extinction.

Three weeks ago I was contacted by Louis and Michel with the shocking news that the festival, which has become a fixture in the international calendar for publishers and writers from around the world, was having its funding withdrawn. At first I assumed the festival must be another Covid-casualty and I set about rallying friends and authors, alongside publishers from other countries, to write Letters of Support which would then be submitted to the municipal council of The Hague. But the plot thickens. As the letters started to flood in from Alan Hollinghurst, Hilary Mantel, Irvine Welsh, Max Porter, Deborah Levy, George Saunders and a host of prestigious international writers and musicians, it emerged that the crisis wasn’t virus-related at all.  Instead, priority had been given to a rival literary festival in The Hague, Winternachten. Then, a week ago, the Dutch newspaper NBC reported a cause scandal: a prominent member of the commission responsible for deciding funding priorities for culture in The Hague had been appointed director of Winternachten. It is, perhaps reassuring that scandal and corruption are not exclusive to British governance and decision-making.

Today in a show of solidarity with Crossing Border, we at Social Gathering are publishing the names of those from the literary and music worlds who have expressed support and love for the festival in letter form to its founders. 2020 has been relentlessly horrific; universally brutal. Live music, performing arts, literature and the institutions and venues that protect and nourish artists are buckling, running out of oxygen. Festivals like Crossing Border are the connective tissue in the fabric of the culture. It is at venues like this that writers hear and meet musicians, their worlds collide and new art is made. Publishers find new writers in foreign languages. Friendships are made that go on to define the literary culture of a generation.  I have seen it happen. Time and time again. As I sit here on an uncharacteristically baking Bank Holiday Monday in Essex, I dream of an evening spent sheltering from the rain, drifting between the rooms, venues and stages of Crossing Border where the magic happens. And I’m overwhelmed by happy memories of performances by Steve Earle, Michel Faber, Lou Reed, Edna O’Brien, Flaming Lips, Natalie Merchant and dozens of other artists.