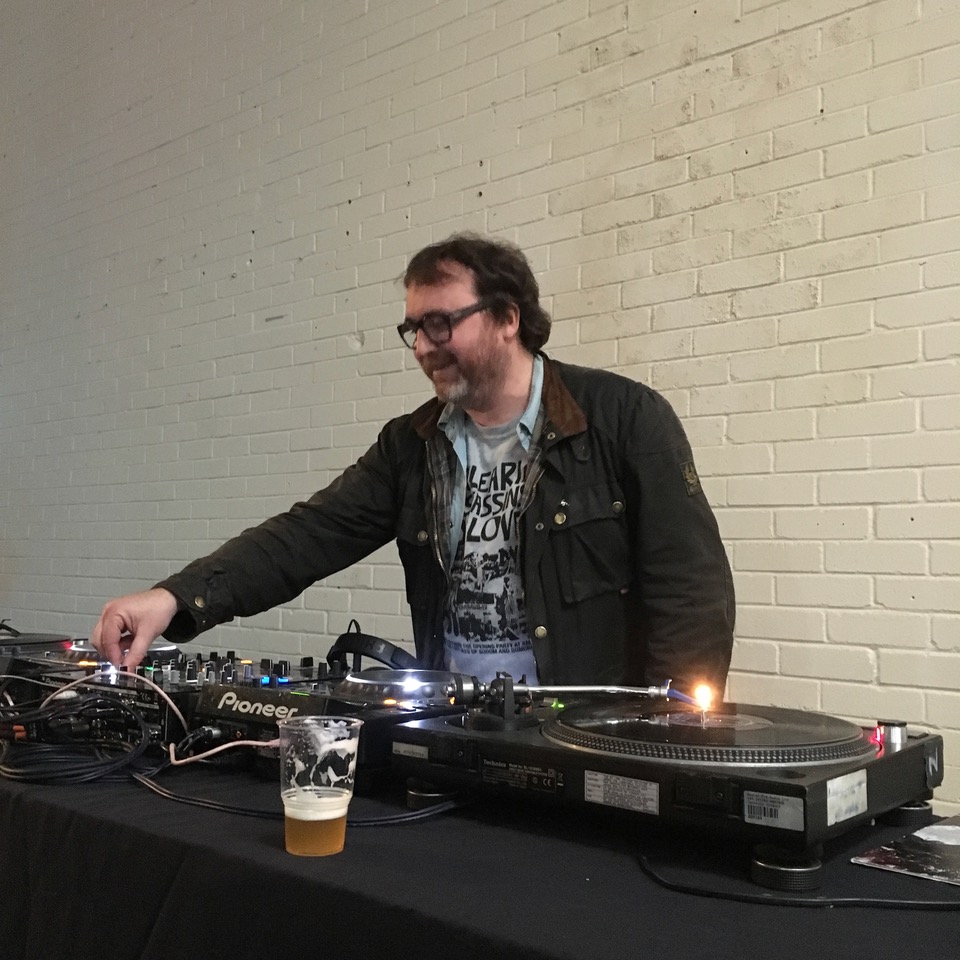 Here at The Social Gathering we’ve been marking May Day by celebrating how we come together to fight the power, enact revenge and resist sexual control.

Another May Day weekend tradition is getting together on the streets and in warehouses and under arches and in pubs with people who love music as much as you do. It’s about starting the day in the sunshine (or more commonly the rain) and finishing it 15 hours later at daybreak.  It’s about losing yourself and your worries for that one weekend.

I’ve lost Jeff O’Toole on those streets more than once. It’s always a comfort to eventually find him somewhere in a crowd, enjoying a band, looking happy. It’s hard to cope with missing this year but here’s to the next time. Until we can meet again in a Salford car park enjoy these words and fantastic records from Jeff.

I love Sounds from the Other City so much. When I left my home town for the big city in 1995 I moved into a high rise just off Chapel Street. Because of this going to Sounds always feels like going home, even though I only live a mile or so away now in Hulme.

It always makes you feel so free, wandering the streets from venue to venue with a beer in your hand. It feels so naughty walking with a beer, we’re not normally allowed, it’s great. Sounds, losing your mates and wife, finding old friends, meeting new friends. Missing the bands on your list but not being arsed. Seeing fantastic new acts you’d never heard of. Getting quite refreshed in the afternoon, in the sunshine on a Sunday. Super hot, sweaty, packed venues – coming out blinking into the Sun. Sitting by the river opposite the Pint Pot for a breather. Trying to eat curry & chips. Coming around on the dance floor in The Mill at 5am wondering how you got there just as your mobile goes off and it’s your nearest and dearest wondering where you are.

Aoife Nessa Frances: Geranium
This would have been Aoife’s first SFTOC, I was lucky enough to see her at the album launch at The Golden Lion in Tod (seminal venue). Her live sound is a bit more beefed up, check out her debut album on Basin Rock records.

Girl Ray: Girl
I fell in love with Girl Ray and especially this song when they played at The Social’s birthday party last year. That seems such a long time ago now.

Jay Som: Superbike
Jay Som hasn’t played at SFTOC but she’d be perfect. This record is ace so it went on the mix.

LA Priest: Lady’s In Trouble With The Law
LA Priest is one of my faves, I’ve been hammering this record since it came out. I even managed to end up with paint splashed all over my copy at a Black Jack Brewery party. Luckily the opposite side to this track.

Menage A Trios: Hey
The secretive Menage A Trios don’t play too many gigs so it’s really special when they do. Their Album Australia Part III is fantastic and well worth checking out.

Gruff Rhys: Bae Bae Bae
What can you say about Gruff other than we love him and everything he puts out is amazing. I was so looking forward to seeing him this year. Good job he’s always touring!

Pip Blom: The Shed
Pip’s show at The Old Pint Pot a couple of years ago was one of the most packed and sweaty gigs I’ve ever been to. They were the first band of the day too. The roar that came up from the crown when somebody managed to turn the ceiling fans on was hilarious.

See Thru Hands: Hot City
Hometown favourites, Duncan has been described as Prince in a Berghouse. Ha! Funky as you like.

Plank: Aphidelity
Plank played one of the strangest gigs I’ve ever seen at SFTOC when they recreated Pink Floyd Live at Pompeii, even playing in the round, at The Salford arms. I think you were supposed to close your eyes!

The Orielles: Sugar Tastes Like Salt (Part 1)
Another sweaty one at The Old Pint Pot when the Heavenly Crew took over. This might have been the first time I’d seen The Orielles… It certainly wasn’t the last.