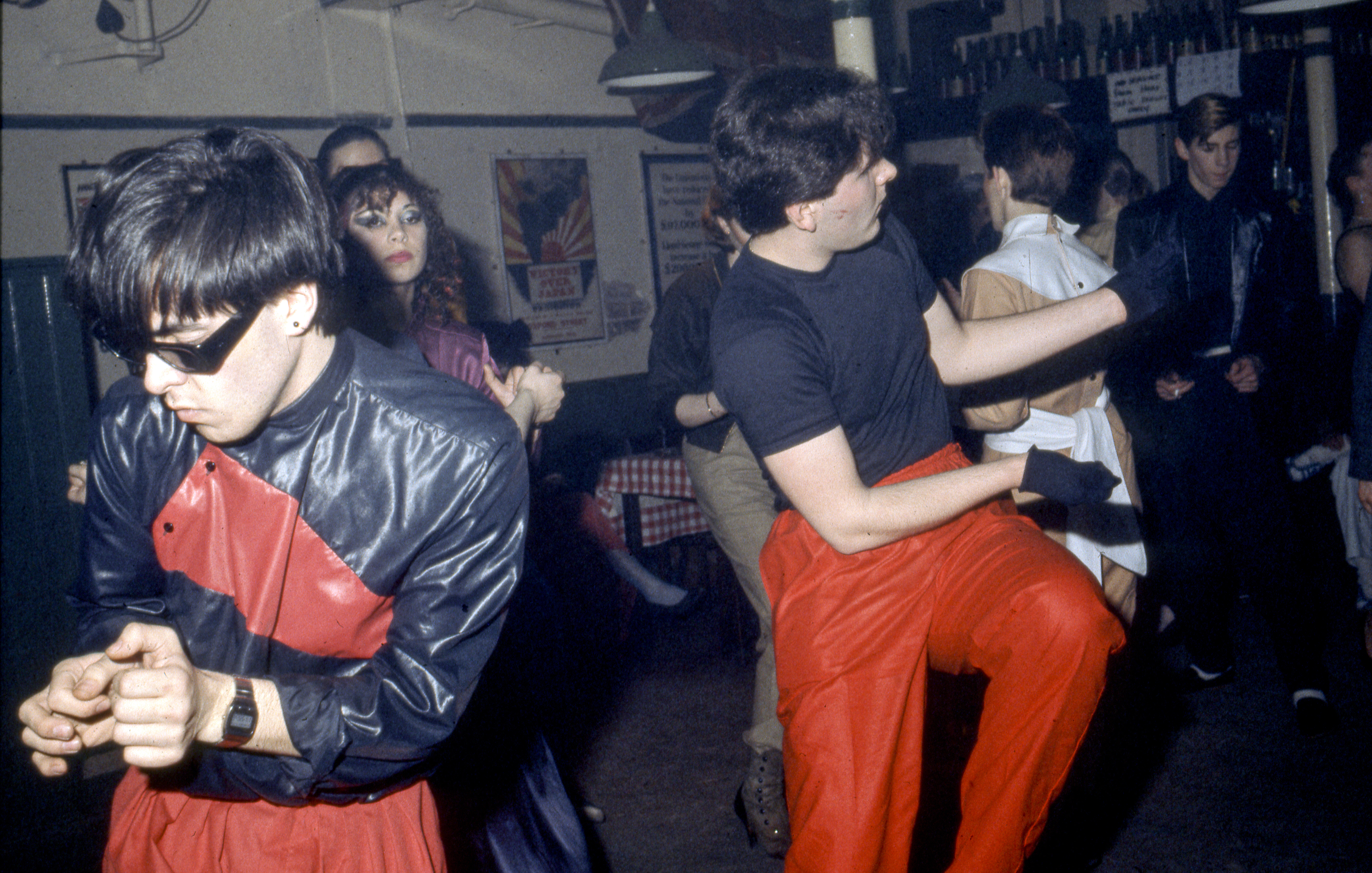 ‘Obviously I’m into myself, but I’m not walking around just saying, “Oh, everybody look at me.” I wear make-up and dress this way because it makes me look better. I’m not doing it to get people to stare at me. If I wanted to do that, I could just put a pot on my head, wear a wedding dress and scream down the high street. It’s easy just to get attention. People also think if you look like this, you’re running away from something . . . I’m not hiding. It’s a long way from hiding.’ Boy George

Who were all these people?

It was late March 1979, a Tuesday night, around ten thirty, and Covent Garden was dark, wet and ominously quiet. The street lights were off, there were no cars, no bodies. It was springtime, but still cold and empty, looking not unlike the set of some fifties spy movie – one of the austere black-and-white ones, before James Bond and Harry Palmer came bounding in with their smirks and their colourful ironic cool. The ‘Winter of Discontent’ may have just drawn to a close, with the dustmen finally going back to work, but the central London streets were still full of rotting rubbish, with food scraps spilling out of the sodden cardboard boxes, cracked plastic containers and torn black bin liners dumped by the neighbourhood restaurants. Five years ago, the famous fruit and vegetable market had moved south, over the Thames to Nine Elms, taking any hustle and bustle along with it, and the new shopping centre in the Covent Garden piazza was still over a year away (the new arcade development would have quaint, old-fashioned gas lamps at the request of the architect). So Covent Garden still felt very much like a postcode in limbo.

Tonight, though, at the eastern end of Great Queen Street, near Kingsway, a crowd of extravagantly attired night owls was gathering outside a small, nondescript wine bar, some of them clogging up the pavement in their shawls and funny-looking capes, their hairstyles making several appear far taller than they actually were, rivalling the unlit street lamps for attention in the moonlight. Their stilettos and brogues may have been wet from the puddles, but they all looked polished. There was someone who looked a little like a young Clark Gable, another wearing black leggings and a skirt under his black Lewis Leathers jacket. Others were sporting metallics and neon.

Squeezed next to a tiny secretarial agency, from the outside the Blitz looked completely unprepossessing, almost as though it was daring you to ignore it. A small sign inside asked you to keep the noise down as you left, out of respect to the local residents, although it was difficult to see where they might have lived.

To the uninitiated the place just looked like any other wine bar.

It was the people, though, who appeared to make the Blitz what it was. One by one, they slowly filed into the club, passing by the concertinaed metal grille across the front and nodding to the doorman, who appeared to be just as extravagantly dressed as they were. Actually, he seemed far more important than a doorman – often acknowledging someone he knew, and even occasionally asking someone to step aside, usually the least extravagantly dressed. Tonight, he was dressed in some weird leather jodhpurs and a massive German overcoat. ‘I’m strict on the door because once people are inside I don’t want them to feel they are in a goldfish bowl,’ he would say, when asked by the papers. ‘I want them to feel they are in their own place, amongst friends.’

And there were so-called friends everywhere. Covent Garden might have been desolate and badly lit, but then you walked into the club and it was suddenly, ‘Ta-da!’

The reason they were all here was because Steve Strange – the abundantly attired doorman – and Rusty Egan – the DJ – had decided to move their regular Bowie night at Billy’s – a club way over in Soho – to a more hospitable venue. The Blitz’s manager, Brendan Connolly, had apparently been struggling to fill the club towards the start of the week, and so took a gamble on the Billy’s crowd. But they were all here tonight, as they were every week, as were the press, who had started to take notice too, calling them the Peacock Punks, the Cult with No Name or – worse – New Romantics.

Once inside, the Blitz actually looked a bit seedy, almost as though it hadn’t been decorated since . . . well, since the Blitz. The Second World War-style austerity echoed the flatlining seventies: bare floorboards, gingham tablecloths, old film posters, a bit of wood panelling, an overhead fan, pendant lights with dusty enamel shades, and the obligatory framed pictures of Churchill. There was a small blackboard – ‘All Blitz cocktails £1.95’ – with a hastily drawn martini glass, complete with its own olive. There were even some old gas masks.

The people were glamorous, though. A lot of them – and there was almost no one over the age of twenty-five – looked like they’d come straight from Central Casting, extras in their very own movie. There was a girl over there with cascading copper-red hair, dressed up to look like Rita Hayworth – if Rita Hayworth had been wearing a silver spray-on cocktail dress and S&M stilettos, that is. Indeed, some of the girls were in such tight dresses they looked like egg timers. One had such defined cheekbones they appeared to be almost swollen.

Chatting over by the bar were Steve Dagger, the super-slick manager of Spandau Ballet (who would soon become the Blitz’s in-house band); Robert Elms, who was the scene’s most reliable Boswell; Fiona Dealey, a St Martin’s fashion student and generally regarded as one of the queens of the Blitz; Chris Sullivan, soon to form a short-lived jazz–salsa band called Blue Rondo à la Turk; milliner Stephen Jones; fashion student Michele Clapton, who would one day become an Emmy-winning costume designer, working on Game of Thrones; and Cerith Wyn Evans, another St Martin’s boy, who would go on to win the Hepworth Prize for Sculpture. So many people in this room would go on to become something or other, but for now they seemed content to pose about in their satin and tat.

Over in the corner was the society photographer Richard Young, who had descended into Covent Garden tonight, forsaking the boldface names at Tramp, the Embassy and the Dorchester. For him, there were rich pickings here. Everyone was dressed up as though their lives depended on being photographed, swishing and pouting and looking almost like mobile sculptures. They smiled, they glowered, they knew they were in exactly the right place at the right time.

As you passed the cloakroom, you’d see a seventeen-year-old George O’Dowd, who in a few years would be known as Boy George. Ostensibly he was here to check coats, although there was always a suspicion he rifled through the pockets when everyone was on the dancefloor. He already had the razor-blade wit that would stand him in good stead when he was being besieged by the world’s press in a few years’ time: ‘Doing that one to death, aren’t you, darling?’ he would say, if he thought you hadn’t been adventurous enough with what you were wearing. People tried to avoid the cloakroom as much as possible.

Sitting in a huddle at one of the small, rickety, gingham-covered tables around the edge of the club were a couple of ‘them’, the small nucleus of London archy-farties who until the Blitz Kids arrived were the crowd who populated the paparazzi pages in Ritz magazine: Andrew Logan, Duggie Fields, Zandra Rhodes and Peter York, one of the greatest social chroniclers of our time, and someone who loved a new set of sparkling young wannabes. He liked nothing better than bending into a conversation – like George Sanders’ Shere Khan – and asking one of the extravagantly dressed urchins some question or other about an arcane ecclesiastical reference, usually to the bewilderment of the recipient.

There was a real buzz about the Blitz – a word that in some circles was being said in inverted commas, almost as though its original meaning had been consigned to history – a buzz determined by ‘faces’. This very poor jet set included the dancer Michael Clark, future global superstar Sade and more St Martin’s students than you could quite believe. The dancefloor was full of an intoxicatingly random mix of people: DIY futurists, make-believe nuns (the ones Peter York was talking to), rich boys trying to look poor and poor girls trying to look rich.

The Blitz was a creation myth, and those involved mostly believed it.

Tonight, it was all about divine decadence. Over by the back wall was a girl wearing a black beaded dress and a bandeau, clutching a long cigarette-holder and wielding a frown. Very Cabaret. A bit Night Porter. By the stairs, two boys were surreptitiously kissing; standing right next to them, two girls were doing the same, although rather more ostentatiously. One of them was Kim Bowen, a St Martin’s student who had started to be photographed a lot with Steve Strange. Lazy journalists would one day say that Strange held a mirror up to people trying to enter the club, asking, ‘Seriously? Would you let you in?’ This would happen, but six years later, at Leigh Bowery’s nightclub Taboo, when the notorious Mark Vaultier was on the door. Strange might have said, ‘Sorry, you’re not blonde enough . . .’ but that was about it.

There were girls here with fire-engine-red lips, and boys with such pronounced eyeliner that it looked permanent. And as you moved back to the dancefloor, the music overwhelmed you: Yellow Magic Orchestra, Space, Ultravox, Eno, Fad Gadget, Sparks, Grace Jones, Thomas Leer, Cerrone, Psychedelic Furs and Bowie, obviously, lots of Bowie. On and on it went, a constant swirl of automated Germanic beats – hard-edged European disco, synth-led, bass-heavy . . . all very angular: Kraftwerk and Gina X, Giorgio Moroder and Donna Summer, and some early Roxy Music. Robotic sounds, anglepoise limbs and unmoving chins. In a room that tried to imagine the past, the music seemed to emanate from somewhere in the future, like some sort of benign sci-fi attendant. Sometimes there would be an ad hoc quadrille on the dancefloor, before one of the team fell about laughing.

There was a rather annoying girl called Rebecca, who liked to hold court over by the stairs – tonight talking to the young designer John Galliano. ‘I’m like Rosemary,’ she would say, meaning the character in F. Scott Fitzgerald’s Tender Is the Night. ‘I’m detached!’ Rebecca said something like this every week, and always cackled afterwards, throwing her head back, waiting for everyone around her to laugh. Behind her was Malcolm McLaren, his orange curls sitting uncomfortably underneath a massive oversized fedora; Midge Ure, with his pencil moustache and Oxfam film noir, and soon to take John Foxx’s role in Ultravox; and Thin Lizzy’s Phil Lynott, all bubble perm and leather trousers, and a throwback to when it was cool to look like a rock star, talking to a girl with a face so white she looked like she was in a silent film. ‘We’re the New Swells,’ she screamed at a journalist from the Daily Express, who was actually writing this down in a notebook. Occasionally, there would be a commotion by the door, that mysterious sense that sweeps over a room when someone really famous walks in.

Outside it was all dark, but here in this tatty old wine bar the future – and the past – reigned supreme.

Did the Blitz already feel like a living museum? Completely. But the people inside were loving every second. They also seemed to be heeding the words of Dr Frank-N-Furter, the narcissistic transvestite in The Rocky Horror Show: ‘Don’t dream it, be it.’

Sweet Dreams: From Club Culture to Style Culture, the Story of the New Romantics (Faber) is published on October 1 – Signed copies are available from Rough Trade