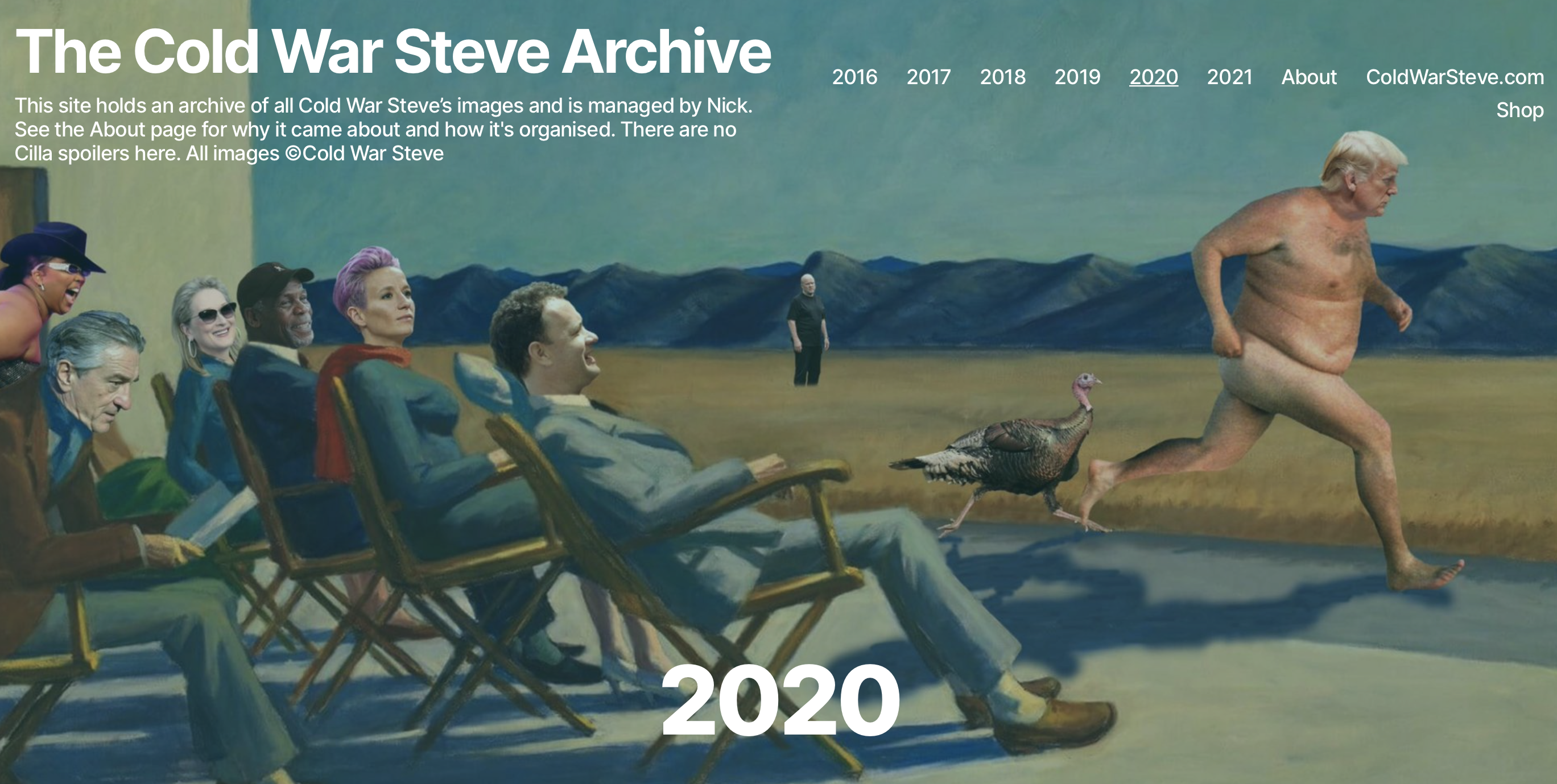 We’ve always been big fans of Cold War Steve over here, The Social put on his first ever exhibition back in 2018 and then last year with everything closed we stepped in to host the amazing Benny’s Babbies on The Social Gathering. So when we heard that a guy from Bristol called Nick had been working on putting together his own archive of CWS’ work (all of it!) we had to try and find out more. The Cold War Steve Archive launches today, exactly five years to the day that CWS posted his first image on Twitter.

We caught up with Nick Varney for a chat about what the bloody hell he was thinking and to virtually shake him by the hand.

Social Gathering: When did you first discover Cold War Steve’s work, were you there from the beginning when he posted the very first image above or was the archive your way of catching up?

Nick Varney: I would love to say ‘I was there’ back in the early days but the truth is that I came about CWS around the Autumn of 2018 I think. I began to see some retweets from people I follow around that time and friends started to text me with ‘have you seen this?’ and that was it, I was hooked, as so many of us are!

SG: The archive is amazing, such a great idea. How long did it take to put all this together?

NV: I started thinking about bringing all his work together at the end of 2019. It was driven by a bit of a collector, completist trait I have (trains, records, art over the years) and the impossibility of finding the very first image on Twitter. I just couldn’t do it. The app would crash, the phone would say no and then through trying I realised that Twitter was skipping days and weeks so I wasn’t seeing everything. So that was the seed, to try and bring it all together and make this work easier to see.

I’m quite impulsive and like to experiment and sketch out live with ideas rather than work things up on paper so there have been in fact 3 very different versions of the site. The first looked like a live spreasheet, super barebones looking. The whole site was one large grid of data which I could update from another spreadsheet somewhere else. Visually quite nerdy and data heavy and had lots of left to right scrolling going on which wasn’t great. It wasn’t visually appealing really but I remember feeling really happy to have started it. The second version was also database driven but this time images started to appear in grids and there was this clever write back of likes and hits back to my database. I really liked this idea of creating a site from a simple spreadsheet but again it had its limitations. So the third version, what you see now, is more traditional and is built in WordPress. It’s by far the easiest for people to use and that for me was the most important design principle and why I kept honing it. I’ve gone round the houses and ended up with something that is easy for the viewer basically I hope.

SG: Chris’ work has gone in lots of directions and he has a few different styles he adopts at any one time. Do you have a favourite piece, or a favourite style?

NV: I am attracted to both the really, really simple stuff, like Mark Franciois and the cheese traps, and the mega complex, medieval pieces that borrow from the artists Bosch and Brueghel. Some of the 2016 stuff with just Steve and maybe one other person is just excellent and I really like where Chris put him in what looks like old Soviet astrnoautical space gear and kit. I like some of the pieces where there is a real choreography of characters that works well in the space, in particular the piece The Duel after the Masquerade and the recent Brexit Island which is now a print. I particularly love the images taken from the hill cheese rolling event in nearby Gloucesterhire. The energy is amazing in those and the juxtaposition of Mogg hopping down that hill never fails. It was a hard choice choosing the feature images for each page of the archive site but those are an indication of what I like.

SG: Any surprises along the way?

NV: Just how much there is!

SG: Any that really stood out for any reason?

NV: There was a phase during 2019 where the works got super-detailed and the tower bridge piece (Sept 2019) took my breath away and those of my mates. You could tell that Chris must have put hours and hours into them and it was just staggering. Everything is Going to be Alright and Benny’s Babbies are glorious, positive pieces in the same vein.

SG: Were there any clear shifts or a point at which things, the style or output really changed? Any pieces that marked those periods?

NV: I guess you could see the early works were characterised as looking back in time and the Cold War period of course and then Chris began a shift to comment on current events leading to some pieces coming out the same day a news story breaks. It’s all there in the 2016 and 2017 works, Brezhnev, Gorbachev and Soviet Russia imagery, the Berlin Wall, Kennedy and the Reagan years covering the US etc. Then you can see a gradual shift at the start of 2018 to producing work that reflects the news and events of the day. I don’t know but perhaps the increasing amount of work on more contemporary events was fuelled by the impending daily chaos of Brexit and Trump and a desire to react artistically to satirise some of these despicable characters and events? I don’t think a single member of the Tory cabinet has been missed out in the last two years.

SG: Looking back at some of the Twitter interactions from the earliest ones it amazing to see likes and shares in single fingers! Frozen in time, lost in Twitter.

NV: That’s the fascinating thing. Each image in the archive links back to the original tweets so those early reactions and comments can be seen again and who knows through retweeting and sharing some of those old images and conversations might be sparked in to life again.

SG: You were also involved in the DIY ‘You, Me and CWS’ exhibition project last year weren’t you? The one that couldn’t end up happening because of you know what what . .

NV: Yes, my partner and I got in touch to put something on in Bristol. It was a perfect setting for it, a derelict looking gallery with stuff falling from the walls, in an area of the city that loves its art. But then Covid came and that was that. It was just before then that I had got in touch about the archive and from that I was kindly asked to work on the virtual ‘You, Me and CWS’ site which was an absolute honour to do. There’s only a few more days to visit it here:

SG: It’s amazing to be able to share all this one place, loads of new followers will have no idea about how long Chris has been doing stuff. How do you feel about the early works, what do you think the reaction might be?

NV: That’s absolutely why I wanted to create the archive. The early stuff has to be seen. It’s amazing! The early works are mostly black and white and have a look that is very direct. They have a raw, quick, collage feel to them. That style reminds me a little bit of the Crass record sleeves I used to pin up in my bedroom and the work of Peter Kennard. They’re also really funny!

SG: I shouldn’t ask, but I will, any idea when Cilla first appeared ?

NV: Not exactly and that’s a bloody good question actually! I now feel compelled to go and have a look but for sure the answer is in the archive! Maybe that’s a challenge for the specialist Cilla spotters of which I am not one. The forensic skills needed to find her these days are amazing!

SG: Have you and Chris met yet?

NV: Yeah I bought a jigsaw and two books from him at a talk in Bristol. It was election night and so there was naturally an air of anticipation about how things would pan out. We spoke about our hopes and fears for the result and Brexit.

SG: Do you have any actual pieces yourself on the wall at home?

NV: Yeah as I say it’s been my collector instinct that has led to creating the site so yeah I have a few pieces. I’ve got a bit of a CWS art corner going on in one of the rooms which has some limited editions plus Christmas cards, framed up advent calendars and flyers, including the two from the very first exhibition at the Social of course!

SG: I think you’ve done a vital work here mate, documenting the development of CWS’ artwork which otherwise might be lost in the depths of social media history!

NV: Yeah the changes are there to see. As well as the variety of styles that Chris has been through what hits you clearly I think is the staggering volume of work when it’s laid out for you to see in one place.

SG: So are you now the official Cold War Steve Archivist?

NV: I hope so! I mainly hope people enjoy the archive and like the ease of working through all of Chris’ work.

The Cold War Steve Archive built by Nick is live now on www.coldwarstevearchive.com