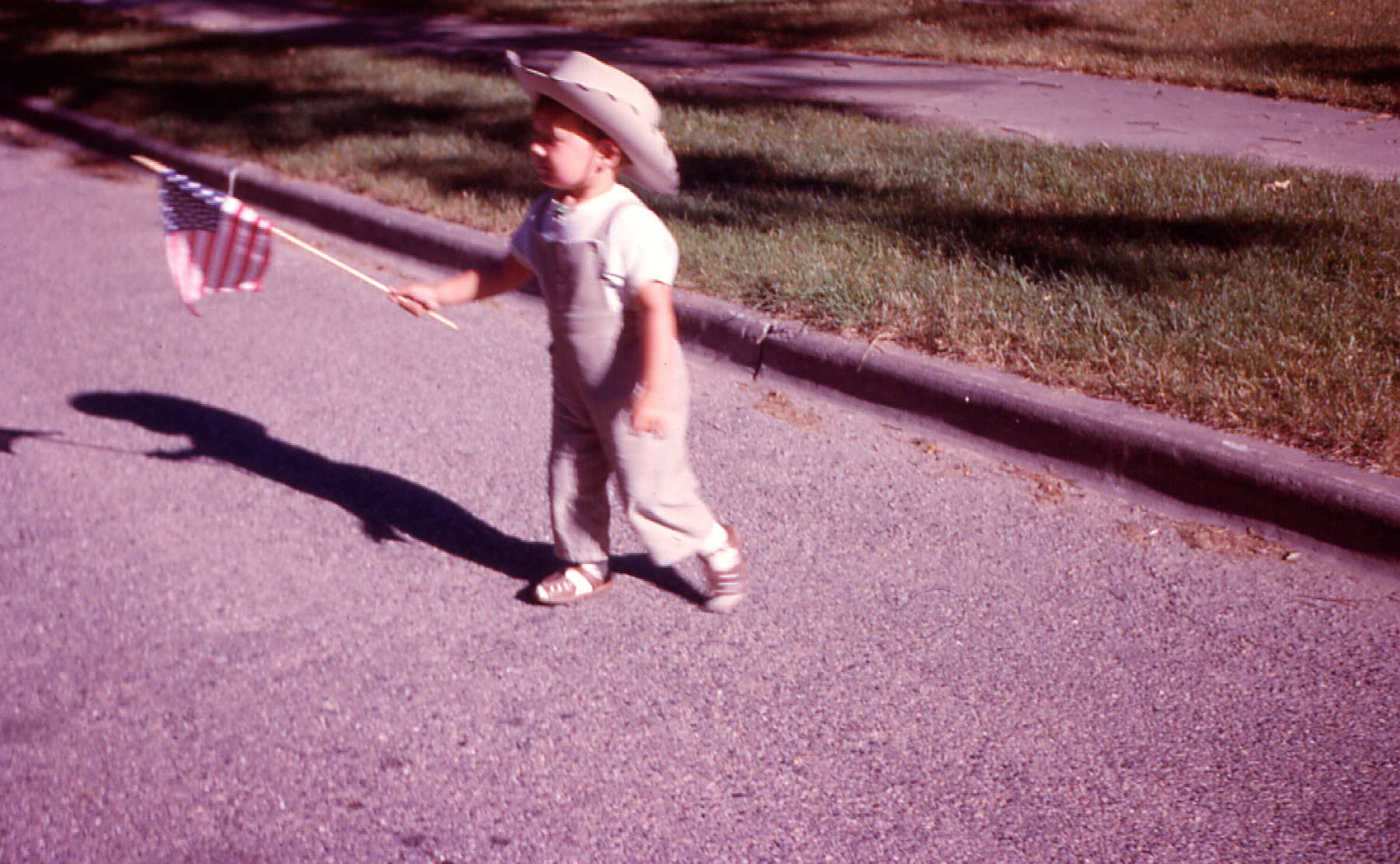 This is a reflection on time, a train and some presidents of the United States. It’s about the non-linear eddies created by people moving through time, and maybe it’s about the idea that our innate need to define life in a linear way defeats our understanding of how some things happen and are connected.

It’s also about what happened to a consistently rising linear trend of the last seventy years, the now-almost-vertical line that describes the amount of machine processing power you can buy for a thousand bucks.

And more: about how accustomed we grow to linear trends, how invisible they are, as eddies look better on Instagram.

Act One: the above picture is of me in a former guise in the year John F Kennedy was assassinated. He was fine at the time of this picture. He had started the day with a meeting on Vietnam, before flying to Hyannis Port to mess around on yachts. It was a Thursday. Eight days later, the first reliable military reconnaissance satellite was launched to survey the world, beyond the reach of anyone. Twelve days after that, on a Wednesday, John F Kennedy hosted a group of high school students from the Boys Nation forum run by the American Legion. He was filmed shaking their hands in the White House rose garden.

Act Two: when I was six I mysteriously sat on a stool for the duration of a live TV broadcast of a train journey between New York City and Arlington, Virginia. The train looked empty but the tracks were lined with people who were watching. Some waved. Some took pictures. But the train didn’t stop for them, it rolled slowly by, and they didn’t seem surprised, it was as if they knew it wasn’t their train, they were resigned to watching it leave.

I slowly learned that this train contained a dead body. This was how the plot unfolded. The train contained the body of John F Kennedy’s brother, Robert F Kennedy, who had been shot just after midnight two days before in a kitchen passageway at a hotel, even after a bodyguard had told him not to go near the kitchen. Bobby was campaigning for president and had decided to take a shortcut through the kitchen to the press room. No, said his bodyguard, Bill, but he went anyway because he was alive and there is an understanding in this universe that life is a thriving thing that goes wherever it can and takes the shortcuts it can. That was his life and now it was gone, and Robert’s lifeless body was on a train being pulled by two Penn Central GG1 electric locomotives designed by people who believed in the future: thriving, powerful locomotives taking no shortcuts because they pulled a body whose schedule had grown infinitely flexible. The last Kennedy brother, Ted, had said that morning: Those of us who loved him and who take him to his rest today, pray that what he was to us and what he wished for others will some day come to pass for all the world.

It was important, this train, I realised, this was a show about life and death and importance, importance to people, people like people everywhere, in cotton and denim and Sunday best along the route of a train for one who couldn’t even see out the window.

His body rumbled past. Horns blew that sounded like pain.

When the train reached Elizabeth, New Jersey, two spectators were killed and another four injured by a train coming the other way. It blew its horn and slowed right down but the people didn’t get out of its way. Someone said there were two million people along those tracks. A cast of two million saying goodbye not only to Robert but to a different future, to their history, their decade, for ever, as that time rolled to its end aboard a train.

This happened six days before Donald J Trump’s twenty-second birthday, fifty years after his grandfather had died in the 1918 flu pandemic. Joseph R Biden was just gaining his law degree; he had been married for two years as the train rumbled on, the rattle and clink of it passing crowds of stirred people. Bobby come back! Come back – Bobby!

He doesn’t come back.

Four years after Bobby went away, I joined American schoolmates echoing noise from their households about the election race between Richard M Nixon and George S McGovern. Richard M Nixon was embroiled in Vietnam which had been the subject of John Kennedy’s meeting on the morning my picture was taken. But I was a McGovern boy because that’s what my crew was, a bunch of McGovern boys, and there were also some badges floating around, we’d vote for anyone with badges. We were kids, which meant too young to have independent identities, thus we acted as one. Our identities weren’t formed because that doesn’t start until you reject your friends’ opinions, and that doesn’t happen to kids at all because their crew is all they have by way of a mirror. This isn’t particular to that time or place, it’s universal and has to do with the species we’re in. The Boys Nation forum run by the American Legion, for instance – some of whose boys were filmed shaking John F Kennedy’s hand in the rose garden of the White House barely twenty days after my picture was taken further west – relies on precisely that young time of life to teach citizenship and American values, because the kids are unformed and receptive.

One of those boys in the rose garden was sixteen year-old William Jefferson Clinton. It was a Wednesday. Thirty years later, on another Wednesday, he went back to the garden as president of the United States, and six years after that, on a Tuesday, he addressed the nation after two high school students went on a rampage in a growing phenomenon about which I was starting to write a novel. The picture I sent to the publisher as my author portrait was the one taken twenty days before John F Kennedy shook the boy’s hand who would later address the nation on the theme explored in the novel.

Act Three: forty-eight years after Bobby Kennedy’s failure to return, Joseph R Biden and Donald J Trump were still here, plus the rest of the world at that time, including you and I. It was 2016, and presidential elections were happening. This time Hilary Clinton, wife of the man who shook the hand of the brother of the body on the train, was running in a bid to occupy the house with the rose garden, from which her husband had spoken to the nation after tragic events I had since explored in a novel.

This is what I mean by eddies in life. But they have taken our minds off the linear juggernaut that ran from the launch of the Gambit military reconnaissance satellite, the first one able to reliably map the world’s secret spaces in high definition. By 2016 this surveillance mindset had flourished and merged with technology. The private sector had discovered that the young lacked independent identities and could be lured and manipulated via social relationships, even distant ones. Moreover, the money had decided that the results could be sold. On the day on which the man who invited this piece of writing agreed to publish my novel exploring the theme on which Bill Clinton addressed the nation, the twin towers were attacked in New York City, following a linear pattern of violence some scholars say began with the assassination by an Arab of Bobby Kennedy, whose train had departed that city.

Now the line of political violence met the line of surveillance technology. Intelligence services slipped into bed with social media services under the sheltering umbrella of a lawless secrecy that was justified by global security. The line that had passed through the first Gambit military reconnaissance satellite now vanished in a starburst of behavioural algorithms, many designed to exploit and maintain the identity-free state which made the young form a herd among the summary opinions of others. And by 2016 the algorithm knew exactly which individuals could be discouraged from voting.

And that knowledge was sold and used.

Now the elections are back. My interests stretch to promoting a lofty ambition of drinking again with Democrats and Republicans at the same bar.

They say two million people watched the tracks for Bobby Kennedy. Many more of us will today watch the palms of our hands for the future of human promise, the palms with the devices following the line that we forgot ran through the launch of the Gambit military reconnaissance satellite, eight days after my picture was taken.

I wrote a novel about this too. After I heard a rumbling train, its rattle and clank, empty but surrounded by crowds along a track, watching, preening, shooting pictures – but the cadaver this time was democracy.