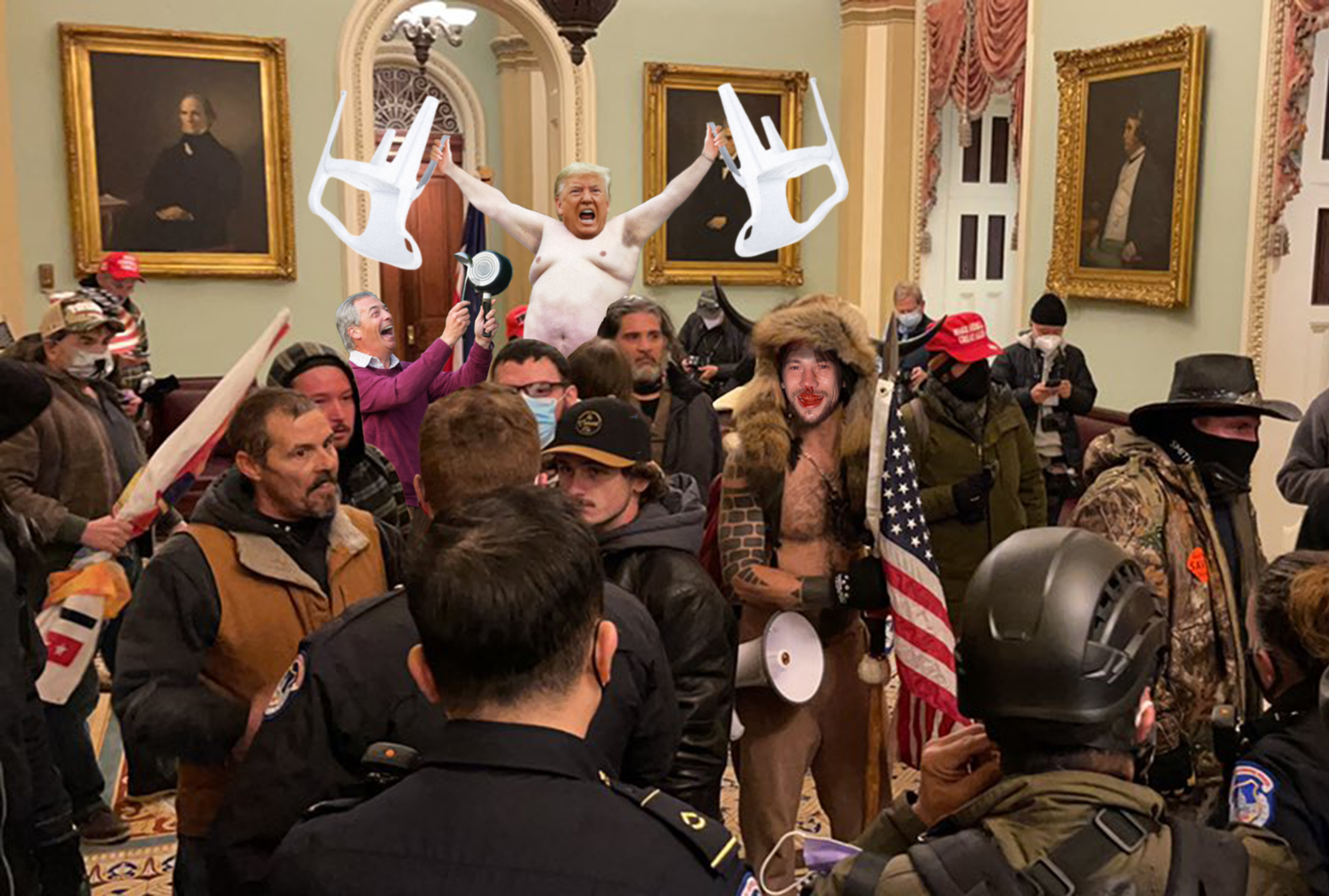 ‘How did it come to this?’ The commentators wailed. Lemme help you out…

As I watched the mob rampaging through the Capitol, numb on the sofa along with the rest of the world, I thought back to when I first began to worry about America.

It was twelve years ago, early in 2009, not long after Obama was elected. A friend sent me a YouTube clip (YouTube then in its infancy) that showed a journalist interviewing a man and a woman about their new president. This couple were not what you would call dazzling urbanites. They had very few teeth between them and they were drinking 40s – Oxy’d out of their gourds – as they sat on a tractor in the middle of a run-down farm somewhere in the south. They looked like their social life was a hard, relentless grind of shooting up garden furniture and having intercourse with blood relatives. I can no longer find the clip and it was a very long time ago, but let’s call them Billy Bob and Brandine. When asked what they had against Obama Brandine looked at the interviewer, stunned, her already slack-jaw dangling even further towards her chest, and said ‘He’s call-uh-ed Barrack Hussein Obama. Barrack Hussein Obama.’ She repeated it over and over, fascinated and horrified by this strange, alien sounding name.

Her implication was clear – I am a massive fucking racist and I am not having this lieutenant of Bin Laden sent to destroy the USA.

Oh well, I thought. These people are outliers. You trawl the sticks of the deep south or the mid-west and you’ll find a few of these fuckers. It turned out that there more than a few of them…

Traditionally these folk had no more interest in politics than they had in most non-relative-penetrating entertainments. But it turned out that they were finding out about this new-fangled YouTube stuff too. And soon about this Facebook thing. Their favourite pastime was seeking out videos posted by dudes like FreedomPatriot30009876 that outlined how Barack Hussein Obama drank the blood of baby monkeys, how JFK had travelled back in time to rape slaves and how The Clintons performed oral sex on children held captive inside the actual Apollo 11 capsule that was used to fake the moon landings. In recent times, there had not been many politicians who engaged enthusiastically with this section of the market.

Who would speak for Billy Bob and Brandine?

Well, after they’d been left to wallow in a marinade of internet conspiracy theories for half-a-decade, after they’d done the full Malcolm Gladwell and spent the stipulated 10,000 hours in front of Fox news (majoring in Mad Racist Conspiracy Theories with a minor in Liberal Paedophiles) along came a saviour in the unlikely form of a New York City real estate conman and failing reality TV host with a raft of rape allegations and a penchant for incest fantasies and genetics. ‘I understand your pain,’ he told them, sitting on the solid gold shitter of his private jet as he flew over them on the way to Manhattan or LA.

‘It has always been possible,’ HL Mencken wrote, nearly a century ago, ‘to become president by appealing to the very worst of our country. However, no one has thought it a good idea.’

This guy fucking did. He ‘loved the poorly educated.’

He took the worst fantasies of the bottom 10% of the school class and spent the next half-decade pumping them into their veins, as potent as the Oxy and the malt liquor ever was. It turned out these fucksticks would believe anything as long as it was racist enough. There they sat, in trailer park and track housing, glued to the blue light of the laptop or tv screen as he promised them… what exactly?

Why should you be looked down on because you have no education? Fuck these college-educated pieces of shit in the big cities. You don’t need no college degree. You’ve got your gut. You’ve got your hunches and instincts about things. About this Barrack Hussein Obama. (The way he kept saying that middle name on the campaign trail last year, stressing it, hissing it out over and over again, just like Brandine had done through her broken, stained teeth more than ten years ago.) And, best of all, you’ve got me.

In time the moronic were joined by the greedy. Those with a big piece of that stock market. Those earning way more than that 400k a year. And by the opportunistic and the lunatic. People like houseboy-loving Florida Republican Matt Gaetz and straight up Q-Anon nutjob Marjorie Taylor Greene would soon be in Congress. The whole demented cauldron came to the boil on Wednesday. The greedy sat at home, watching the Dow hit record highs, watching their Tesla stock triple since January 2020. The opportunistic sat in the chamber, raising insane objections to reality. Where were the Brandines and the Billy Bobs?

They were – literally – out in the cold, up on the grass outside the Whitehouse, listening to the conman and his children and his helpers talking about ‘anger’ and ‘strength’ and ‘justice’. ‘We’re going to march down there and let them know how we feel,’ the conman told them. ‘And you know what? I think I might join you…’

Off they went, down towards the Capitol, threatening journalists on the way, sons-of-bitches like that smart-ass who had sneeringly interviewed them on their farm way back when.

The conman didn’t join them. He’d lied to them again.

He went back to the Whitehouse and watched it all on Fox, laughing his ass off.

He was still laughing when one of the Brandines got shot.

John Niven’s phenomenal, terrifying and hilarious novel The Fuck It List is published in paperback at the end of this month – buy it here