The View From Here: Down the WORMhole IV – Richard Foster 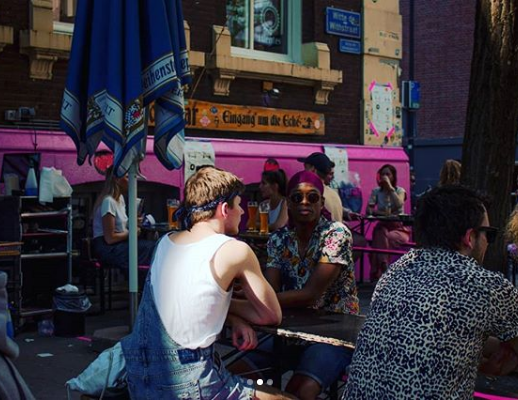 Last week, for the first time in ages, I sat on WORM’s terrace on the corner of the Witte de Withstraat and Boomgaardstraat and supped a pint of draft ale in the sun. And then I had another. It was a moment that is still beyond description for me, beyond even the powers of a Pushkin, Plath or Ryder. We’d just had our first staff meeting to discuss what WORM will be doing culturally over the next 4 years, and now was a time of mild celebration. We are more than lucky, having secured national and local funding for our work. And, happy though I was to celebrate the dosh, and chew the fat with probably the most forward-thinking, transnational and out-there teams in the whole of the Netherlands, the simple act of having a legal drink in the sun, in public, was overwhelming.

It was also a moment to reflect at first hand what a small, incremental victory having a pint is. Transition to a corona-proof venue is, of course, proving a constant slog. It’s the little things that raise their heads and irritate, the things that never ever seemed to exist, let alone cause an issue in the past. For example: the amount of labour used in the minute tasks that keep our terrace open (policing increasingly heady boozers, wiping down each table after use, giving people who want to visit the toilets a bog brush to carry indoors – a graphic indication of their needs) is a lot of extra work and hassle for our heroic bar staff.

The restrictions are to be lifted further on July 1st, with 100 punters being able to attend an event. That sounds great but everyone is still supposed to keep the regulatory 1.5 metre distance. Which – alongside another tsunami of red tape – will be an issue to us at WORM, being a fairly large venue complex broken up into relatively small performance spaces. That “labyrinth” of interconnected spaces, one of the great selling points in normal times, now provides a host of problems that just don’t square with well intentioned government measures. For instance, our main hall can officially hold 250 people, but given our “arty” layout (replete with pillars, inbuilt cinema seats, bar area, and the odd nook and cranny so beloved of venue goers) 100 often feels full. I reckon that currently, the concept of even 50 people uncomfortably avoiding contact with each other will feel a squeeze for many.

Other, mainly non-human headfucks, are revealing themselves. Take selling single tickets in advance. It’s the law, we can’t discriminate on any level. We have to sell individual tickets. And now we’re putting on films again for limited-number screenings. WORM wants to see people back enjoying themselves. But who wants to buy a ticket for a flick, only to find yourself sitting in proximity to someone who may be the dreaded symptomless carrier? It’s up there with being stuck on a train with a drunken angry head and his sober, snarling dog. Given space allocations, and our production staff working out visitor-movement scenarios in the main hall, we have to bunch some seats into pairs. Otherwise people can’t move for that mid-film piss, or leave early or come late… and with less seats there would be no point in hosting the event. The lack of choice for the individual groover-cum-boozer-cum-cultural grazer is becoming more and more apparent.

Ach, why moan, it’s teething issues innit, and increasingly, as people forget why they were staying in in the first place, the restlessness and desire to break loose becomes more apparent. A case in point: we are hosting a series of events from the great PRSPCT organisation; a bunch of demented noiseniks who have provided Rotterdam with some great hardcore parties over the years. The evening shows highlight a well-known underground deejay, who ramps out the noise to a carefully regulated audience; each allocated a seating space. Imagine, taking in (say) a hardcore drum n bass gig, sanblasted out over a brand new PA, whilst sitting down. My colleague Khalil, who programmes the club nights, told me it got all too much for some benighted crustcore warriors, who went as berserk as possible in their designated space. “As berserk as possible”. Think of that phrase. Imagine its provenance here. Roll it around in your mouth, like the last drops of champagne on your tongue. I’ve seen the films. Jesus showing up after the all nighter at Gethsemane had nothing on it.

Lets all pray to whatever power we see fit that designated spaces, and second waves, (and all the rest of the evil shit that make 2020 such a miserable, fractious, unrighteous year) will soon be a thing of the past.