The View From Here: Down the WORMhole VII – Richard Foster 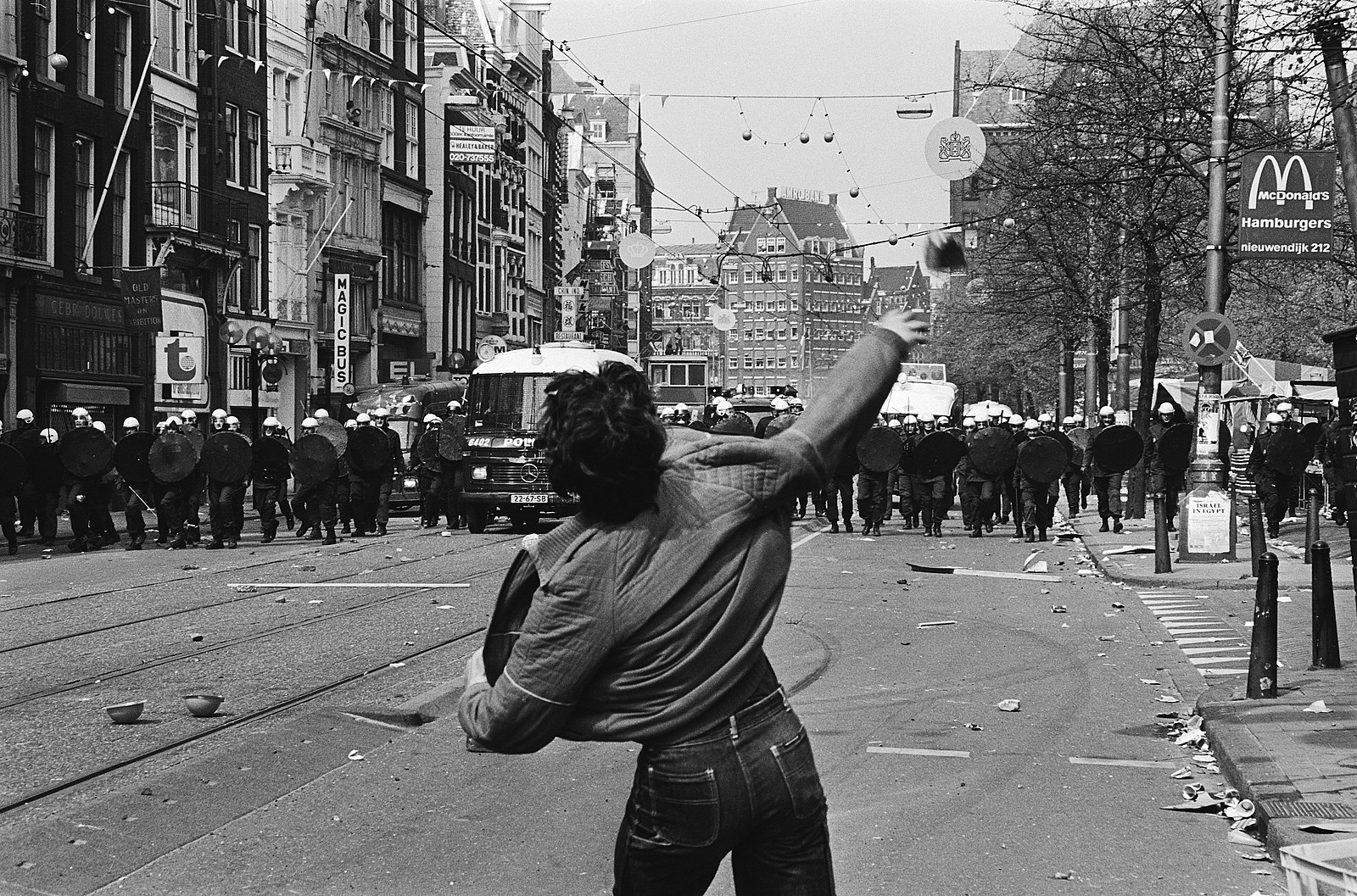 Riots? In the Netherlands? Many UK pals have asked me privately what’s going on. Most Brits think the Dutch walk around (when allowed out of course) drawing on a joint the size of Wales whilst preaching free love for all sentient beings. Others – usually my more well-heeled pals – love it that the country is clean and seemingly well ordered with good welfare and efficient transport. Well, so do I; though I don’t really go on too much about the efficiency of trains here, as some well-meaning if naive types have…

It’s a trope that is most probably a British displacement fantasy reflected onto the country. I often suspect that after a day in Amsterdam, half a hash cookie down and gawping at the windows in De Walle or De Negen Straatjes (as is your socio-cultural wont), Brits would really love to “be” all of this. That is, if they could break the monolithic yoke of Lad Kultuur, or vote in people from some time more recent than the nineteenth-century.

It’s a trope that is also missing out large parts of the whole. Maybe, with the recent plundering of Eindhoven Centraal or the smashing up of Den Bosch, the Netherlands is again waking up to a new take on an old aspect of Dutch society, one within living memory but conveniently forgotten during the sober late noughties and twenty-tens. A more expressive, individual, confrontational Netherlands, one that can be traced right back to the likes of Jantje van Leyden, through the vetkuif of the 50s, the Provos and hippies in the 60s, squatters and punks, or anti-nuclear (or anti-Gay) protests in the 70s and 80s, and the football hoolies and ravers doing their thing in the 80s, 90s and early noughties. Funnily enough the word tuig (scum), once used against hippies, punks and other smelly types fond of making an unseemly noise has made a reappearance in the media during this recent resurgence.

Of course the new manifestations have a typically diffuse set of causes. The burning of a vaccination centre in devoutly reformed Urk (once, when an island, the prison for the nutcases of both sides in the First World War) and the street battles in Eindhoven, Alkmaar, Den Bosch, Tilburg and Rotterdam Zuid (to name a few) are in general something to do with the government response to the Corona Crisis. Whether it’s the curfew, the anti-vaxxers or those frustrated about the lack of vaccinations, or the data leak (and sale by some individuals on the inside) of the personal information of some of those tested. You name it. But then, like the causes, the proponents of protest are from all sorts of backgrounds, ages and persuasions.

As ever, long and often baleful articles by senior or well-meaning academics “warning” of the types of populism seen elsewhere finding an echo in the country appear in the more serious papers like Volkskrant and Parool. And that education and empathy programmes and a need to regulate certain platforms can be a cure. It’s not that their analyses are wholly wrong, per se, but the fact that the subjects of these pieces (whilst going to buy their patatje oorlog, or demanding ui met ei as a birthright) will never read them, highlights the fact that there are a number of Netherlands, each doing their own thing, without much time for each other. This can be also seen with the disconnect most people seem to have with various arms of the government and those parts of society the government directly speaks to. Anger around Coronamoe can be added to the recent benefits scandal, the neverending dispute about compensation for those affected by the earthquakes in Groningen, the farmer protests, and a general unease about the state of things. That things “aren’t what they were”, whatever that means. I’m not going anywhere near explaining the madness around Zwarte Piet. Except to say that I can’t really believe there is still a discussion around Zwarte Piet. For me, Zwarte Piet is racist.

What the riots have also shown is the multiplicities of response in this complex, often highly individualistic land. Alongside the hand-wringing article-writing academics, the likes of Thierry Baudet and Geert Wilders have entered this charred and water-cannoned landscape. Their followers have, I suspect, quite enjoyed seeing these cracks where the right gets in (to misquote Leonard Cohen). Both – and supporters of both – have promoted some questionable hypotheses this last week. Then you have the direct response to the nutters from the likes of Ahmed Aboutaleb, Rotterdam’s mayor, who alongside a typically straight-talking condemnation, wanted parents to ask where their kids had been. Or that of the mayor of Alkmaar, who praised the initiative of AZ Alkmaar football fans to guard the city’s shops. Football fans guarding things. It’s not only AZ, as NAC Breda fans did similar. Yes I am wildly generalising and I apologise now, but anyone who has gone to the match in the country in the last 30 odd years will know that, (for example), sustainable solutions to the decline in the bee population aren’t high on these lads and lasses’ lists.

So no, these kick offs are nothing really surprising to a settled long term resident with a deep and genuine love of the country and a sometimes over-enthusiastic interest in its amplified rock music and oud jenever. They may also highlight something everyone missed: the ineradicable gentrification of the Netherlands, including the cleaning up and/or selling off of its recent cultural history as prime development stock.

The period I have lived in the country (2000-2021) has been remarkable for the disappearance of the quotidian, individual, bottom-up public powerplay on the streets. To go back to the city that kicked off this piece: Amsterdam. In terms of cultural potential, the centre of Amsterdam is a shadow of the city it once was. Any film by Ed van der Elksen of Amsterdam reveals a totally different world, one which was still “active” up to about 2005. Once a loud, vibrant and expressive place, covered in graffiti and frayed posters, and permanently wallowing in the competing smells of piss and bleach, THC, beer, dope, reheated pizza and FEBO unguent, (and cheap to boot), the city is now a place where you can’t escape convenience shop windows full of huge jars of Nutella or groovy places selling whimsical tote bags and ethical smoothies. This reinvention, from Magical Centre of endearing (and often annoying) crackpottery to short break for the nicely off Euro middle classes who like the frisson of staying in a place with a “radical” history (whilst sipping on an overpriced hot chocolate with cream on top) is total, probably irreversible.

It’s easy to forget that tanks were brought in to sort out squatters and punks in Amsterdam and Nijmegen in 1980 and 1981. And that two public royal events (1966, 1980) played out against the backdrop of serious kickoffs in the capital. Someone having the impetus, let alone conviction, to actively stand behind the slogan, ‘Geen Woning Geen Kroning’, with a brick in hand, as a sizable number did in 1980, still feels weird today. My friend, the brilliant social history writer Martijn Haas (seriously his books should be translated into English), when writing of the punk years of the late 70s and early 80s, saw the period as one of continual street protest and display, similar to that which happened in the 1960s. Maybe that is what is slowly coming round again, in this dawn of the Age of Aquarius.