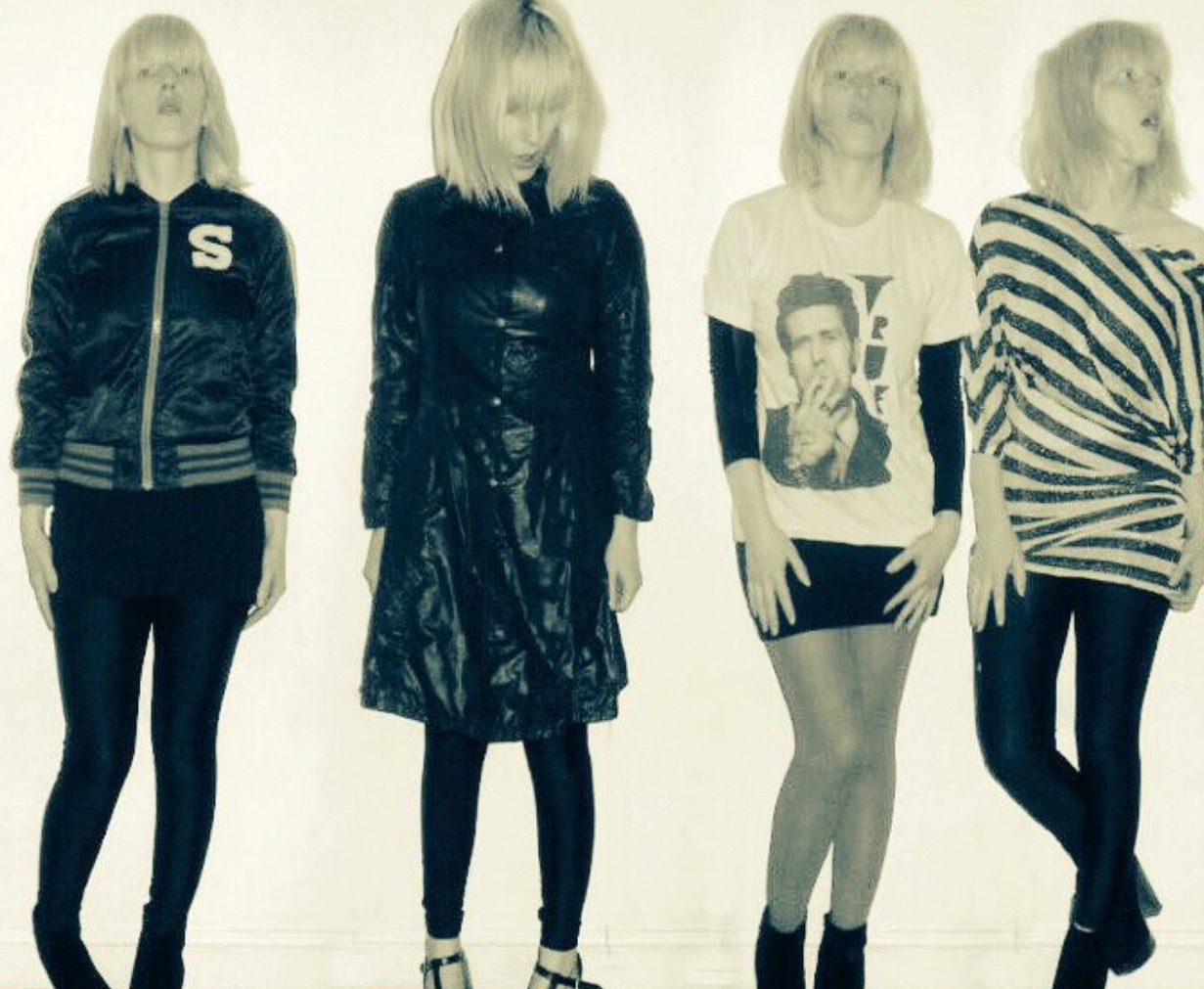 The Dianettes! The Cerazettes! The Yasmins! The Ciliques! The Aranelles! The Karivas! The Levoras! The Nordettes! The Ocellas! The Seasoniques! The Velivets! The Lessinas!  What a line-up of great, lost, girl groups.  Backcombed hair and matching outfits, lavish passions and makeup, how many of the members are jealous of that one girl who has been given the lead vocal again? But don’t go looking for them anywhere.  They are the pills, the Pill, brand names of contraceptives

One time I put together a girl group that was four tetchy, new wave versions of me. It was a while ago when the nights were long and I had to get my entertainment how I could. I called them, me, the Mircettes, after a progestin and estrogen combination pill.

The second Mircette from the left in the picture wears a black raincoat which can also function as a dress. Made from thin, shiny, papery material, it has no label except a tag saying ‘Made in Finland.’ Over the years, I’ve split its seams.  It’s old, from the 60’s, and wants to be retired, but I won’t let it go.  Instead, there’s stitching in different colours of threads because when the material has frayed and burst, I’ve patched it up carelessly with any spool that has been handy.  I’ve even used a stapler, on occasion.  I bought it decades ago in a shop in Newcastle upon Tyne called Spastics Society, shortly before the charity changed its name, in March 1994.  Spastics Society became Scope.  But other names were under consideration too like Adepta, Adepta, Fulcrum, Cognosis, Capability, Canopy, Tasq, Clasp.

Until I moved to Newcastle, I had been a well-meaning if rather dopey mover on the charity scene myself.  There were few people in existence who I didn’t think it was incumbent on a naïve twenty-something to ‘help’: guys who had just got out of jail, women who had just got out of jail, school-refusers, kids expelled from school, sixty-year-olds who had managed to get by their whole lives without being able to read or write a word.    I volunteered with a group offering practical help to those requiring it. No I couldn’t do gardening, no I couldn’t really cook much, no I couldn’t provide transport.  Dressmaking?  Yeah, sure, I would give it a go.  We went to the flat of two old women, one maybe six and a half feet tall, the other less than four.  They explained how they couldn’t find clothes that fitted in the shops and explained, beautifully, what they would like made for them, if possible.  As they talked, I thought about how my talents lay more in the direction of turning up a few hems, or running a couple of straight lines through a sewing machine.  Do you think you can do that?  one of them asked, about a specific type of collar. Oh yeah, sure, don’t think it would be a problem, think I can do that, I said, knowing that I couldn’t.

But what I could do was read aloud.  I went to a little studio to record texts for visually impaired students.  I read various books on the Russian poet, Osip Mandelstam, and quite a few on tort law.  I didn’t really try to understand the chapters, the pages, the words.  After fifty minutes of reading, there would invariably be a sudden separation of sound and mind.  I would be suspended somewhere in the sound-proof whiteness of the recording booth while hearing only faintly the stream of my own voice say intentional tort liability economic tort civil wrongs negligent causation footnote 1 defendant claimant footnote 2.

I was never in a recording studio again until a couple of years ago, where I ended up recording an audiobook of my short stories.   How come every single English person in your audio book sounds like Colin Newman from Wire?  somebody asked me.  Well, I’m not an actor.  I have a limited palette, was my reply.  The audio book was done in a studio near Sandy Row, called Start Together after the Sleater-Kinney box set.  As is the way of these things, when it was happening, I put a post on Twitter.  Recording my audio-book! I said.  And I placed below that a picture of Jimmy Miller, sitting at a mixing-desk.  But in reality, it was a great guy called Niall from Derry who was in charge.  He usually recorded rock bands, and although he wasn’t a short story aficionado, he couldn’t have been better.  Try it again.  And again.  Take it again.  Is that the stress you want on that word?

In another universe, there are charity shops called Adepta or Canopy, and they are stuffed full of cool gear from Finland.  Instead of being stacked on white and pristine pharmacy shelves, the words Aranelle and Seasonique appear on YouTube videos, the comments from fans underneath, fond and loyal. My favourite Seasonique, someone writes, was the best singer but never got the good vocal line.  Some person listens to an audio book and thinks I love how these guys sound like Colin Newman.  The tall and small women in their flat encounter a designer of protean genius who can, with a fold and flurry of fabric, a few sure stitches, produce ballgowns and jackets, capes, culottes and coats.