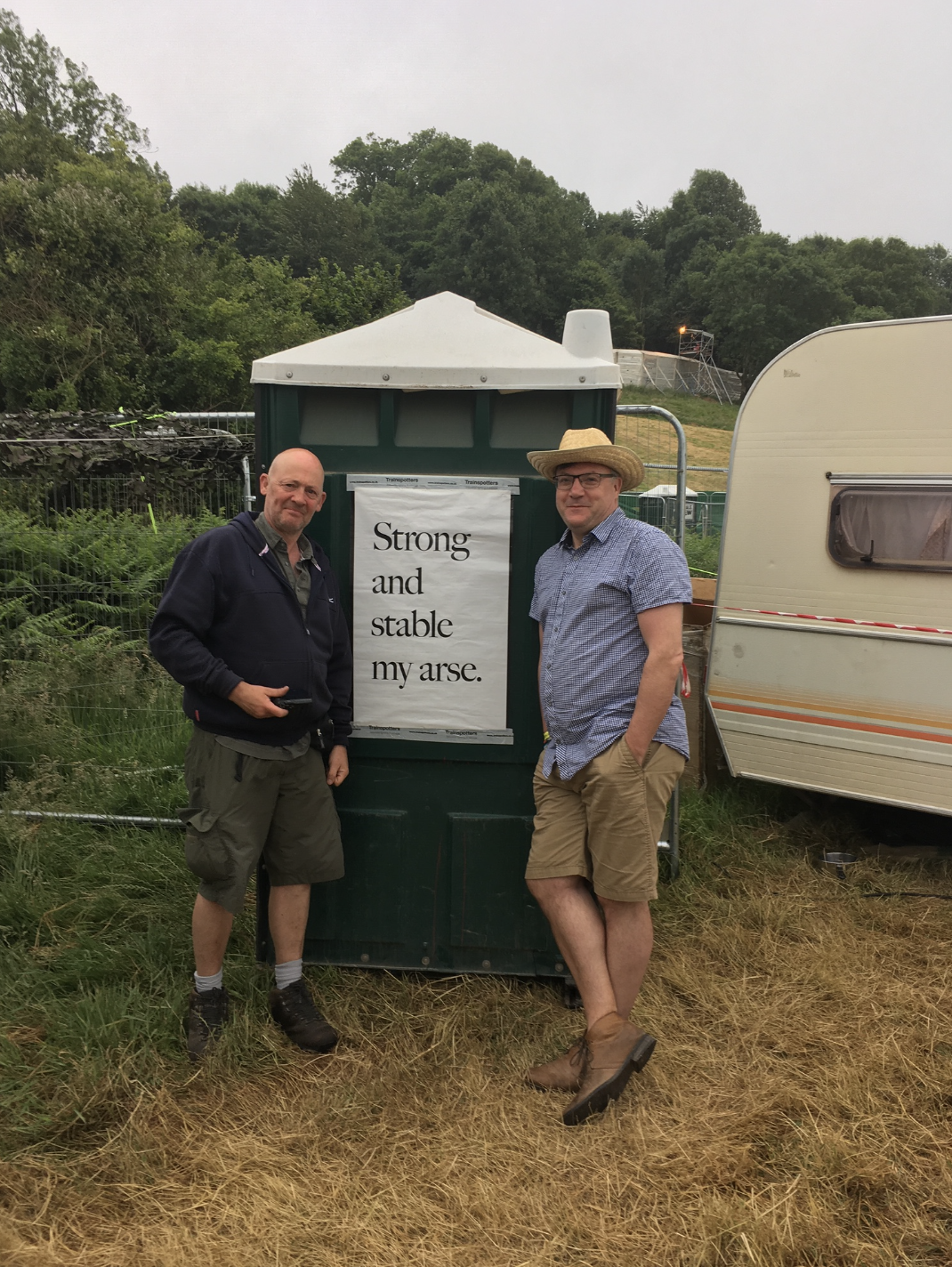 It was all Karl’s fault. He’d been bunking in for years, sleeping in the dub tent, even playing on the main stage (ask him next time you’re in ‘the best shop in Soho’*).

Summer of 1991 and I’d just started work at an indie label. My bass-driven flatmate was talking me into going, for the first time – against my better instincts – to a muddy hippy festival, with the promise of ‘the California of England’ (to quote then out-of-work actor Mark Williams, as he piloted us in his Mini over the border).

It blew my mind.

A late arriver to the party as ever, I was lucky enough to catch the last years of the travellers and their Mad Max vehicles. Karl was right – we found ourselves camped up between the Pyramid & the emergency helicopter landing pad and spent the weekend blissed out on sunshine, cider, weed, tequila coffee and every level of dub. And total freedom. As the late night hawker called out ‘Three trips a pound. Concept free’. It was a recipe that proved enduring.

The thing was back then I didn’t really expect to know anyone there, but I kept meeting people in fields, some who I’d only ever seen in cities before, a lot who I’d definitely never seen in daylight.

A quick spin through the ’90s saw the Mini replaced by a transit van and Karl & I (with various other ‘passengers’) parking our metal tent backstage with not much more than a bottle of tequila, a bag of weed and King Tubby on the tape machine. Friday lunchtime was our set-off, plotting up & on the ale by teatime, never forget catching the first band as that second pint went down, thinking, “Does it get better than this?”

It did of course, as the people and the bands we met & worked with got better and bigger. Far too many highlights, but Portishead in 95 was something else. including finding Beth Gibbons driving a Triumph Spitfire through a bemused crowd ‘looking for the band’ and bumping into a my ace friends Mimi & Shane who’d travelled from New York on the spur, crashed out in the acoustic tent to wake up in the middle of ‘the biggest crowd in history’ (official). And Alex Nightingale’s adventure stories and a Guinness lake in the backstage bar.

We saw the boom boom of the dance tents and stages from The Orb and Screamadelica through to The Chems headlining the Pyramid and we saw Weller, Oasis and the daft B***p*p years. Quite literally pills and thrills and bellyaches, like going on a Magical Mystery Tour with the Heavenly Social. Still, some of our favourite times were the late sessions, sat on the tailgate (or sometimes the roof) with the back doors open, Tubby echoing in the metal tent. We were parked in a field in Somerset. No-one ever told us to turn it down.

We occasionally cheated on the farm and flirted with others (hello Phoenix, good laugh, more bubonic than bucolic) but we kept coming back, though never that keen on the muddy ones. Another reason for the metal tent. We used to make plans about getting down early, the promise of an extra Thursday night (and maybe not the comedown of the search for a sarnie on a Monday morning) but we never seemed able to hit the road any earlier. Be careful what you wish for…

As the festival got bigger, we got older and missed the odd year but if nothing else work and our mates kept calling us back. Some bits stick in your mind.

The godlike smile of Leonard Cohen.

The under-appreciated brilliance of The Shortwave Set (bigger than Bruce that night).

Seun Kuti on a Sunday with my fucked up knee.

Goldfrapp playing the Other Stage in 2004 and needing a big entrance we suggested ‘Ride of the Valkyries’ – Alison picked the theme from Black Beauty. They came from miles. Genius.

Anytime you see The Flaming Lips. Or Portishead. Or the Chems. Or the Rutles (RIP).

And long nights sitting up late with old and new friends.

Suna, my wife, came along for the first time in 2008. I’d missed the previous year – the first year of The Park. I’d heard great things but she was not looking forward to any sort of camping or mud, and arriving late in the dark rain of Friday brought the fear (long story but we ended up in a Travelodge on red wine and pizza while I watched the Euros on the telly, close shave). Saturday was better. She pulled the mental wellies on, met the Endeacotts & the Turners (and the pear ciders) for the first time, was welcomed in like family and never looked back. That was special too.

Then in 2009, just when I was having a bit of a rough time, our old friend Nick invited me for a spring day out to the farm to make an offer we couldn’t refuse. Standing on a hill with grass up to our knees, Emily told us the history of the Vale of Avalon, and how it all used to be water down there. I talked about my grandad going to sea at 12. And with that, The Crows Nest was born.

But, it was only ever going to work on the condition that a few old mates came along for the ride. So it would have to be Karl, Karen and their little litter-picker Manny. And to make sure it all worked, Tony B who I’ve known even longer than Karl. And Reed & Harvey, Wonder Woman Cazza and all the various kids who over the last decade we’ve seen grow into fully fledged crew members in a field of their own.

And talking of Individuals, Nick said, “I know the perfect fella for the hill.” And so we met the legendary Nigel, and his band of merry warriors – Pete, Al, Stephen and his encyclopaedic knowledge of all things musically cutting edge. Now we pack up the transit & set off down the weekend before the gates open. Proper early doors. Get everything set-up for the Wednesday kick-off.

With the constant support of all the old mates from over the years who make the sometimes tricky climb up the hill to play records, bring their bands, hang out for a cuppa and cake or a beer, dance like loons or just take a breather and the view. You know who you are, you make it happen.

It’s not always easy keeping it all going on the hill in the heat or the rain (the mud of that ‘secret’ Radiohead gig on The Park stage, the “it’s all fucking fucked” year, digging a bloody moat around the tent, not to mention the year of the Brexit fiasco) but each year it’s got a bit bigger and a bit better, we always seem able to press-gang an extra crew member on to the pirate ship. There’s might be the odd crossed sword as well as sailing the blissed-out sunsets but that’s family for you. As the much missed Mr Weatherall put it ‘Fail We May, Sail We Must’.

Brilliant days and magical nights with some of the best music, from Kate Tempest to The Pop Group, Caitlin Rose to King Gizzard (with Tony blowing the leccy for the BBC down the hill with his home-made strobes). The Master Musicians of Joujouka making the Nest float ten feet in the air as the rain rattled the tin roof. And two fellas walking up the hill to listen to a Songhoy Blues record and chancing on their secret gig and a last night crowd-surf.

Pete and Al bringing the disco, Jeff the influence of love and Jono the sunrise. And we’ve even been told to turn it down once or twice.

Everyone has their own favourite bit of the festival, but when a total stranger tells you that theirs is the Crows Nest it’s bloody ace.

And on a Saturday night, when Karl plays Tubby and you look out over the lights filling the Vale of Avalon it’s still the best place in the world ever.

Never get off the boat.

*Sounds of the Universe of course.