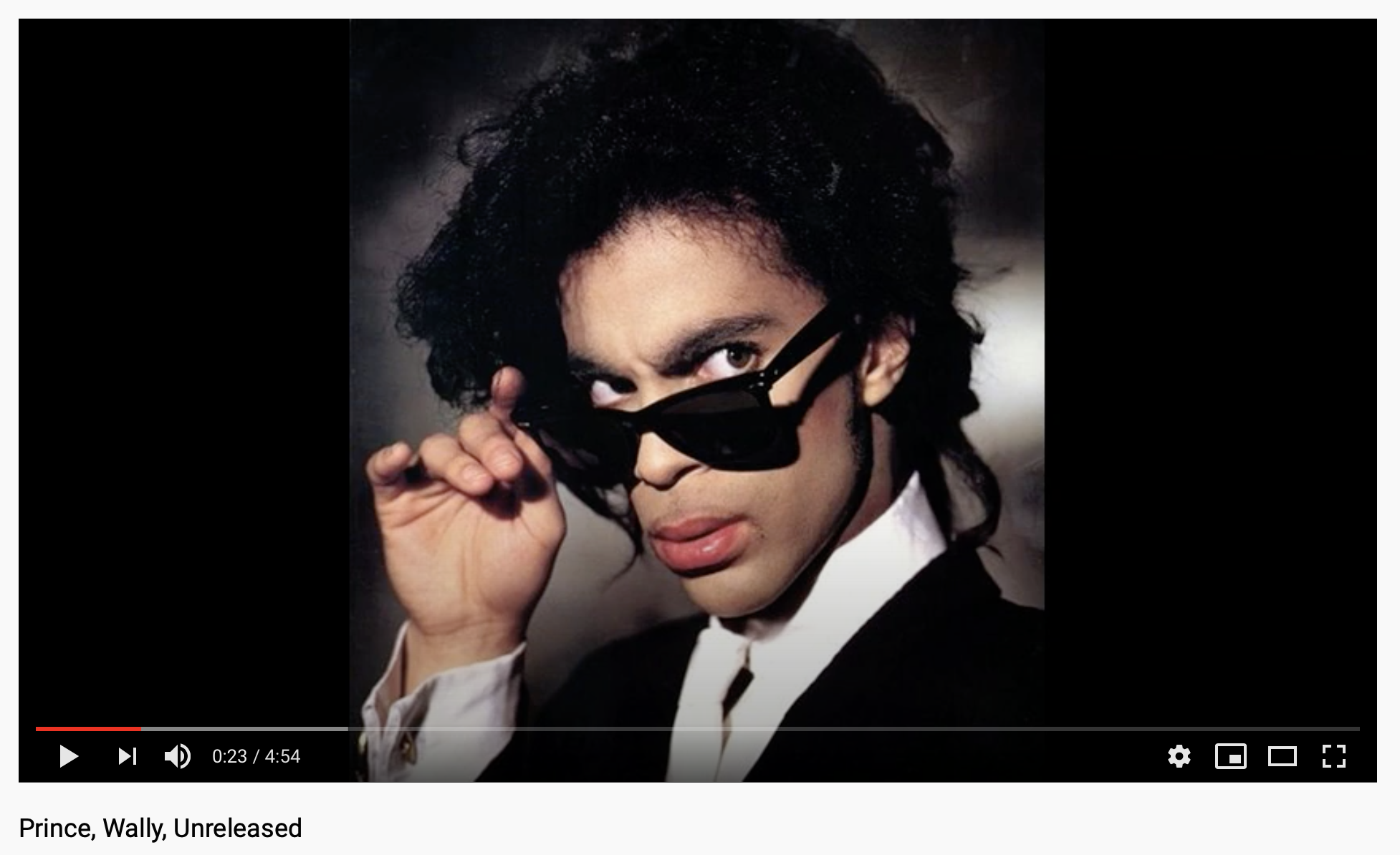 As every fan knows, Prince recorded far more songs than he ever released.  Most years he put out less than ten percent of the work he completed.  The mythology around his music depends as much on what he squirreled away in his famous Vault as the songs he officially released.  Over the years fans and critics have devoted almost as much attention to the songs from famous unreleased projects like Dream Factory or Crystal Ball as they have to his major albums.  And there are many additional less well-known unreleased albums such as Madrid 2 Chicago or Welcome 2 America that are equally mysterious parts of an unfinished puzzle.

But for many years, one song was coveted above all others: ‘Wally’.

The reason why this song became so famous was nothing to do with Prince, but because in one of the earlier Prince biographies, Per Nilsen, with an almost Prince-ly sleight of hand, dropped a few breadcrumbs that’d keep Prince fans guessing for years.

During his interview with Prince’s sound engineer and record producer, musicologist Professor Susan Rogers, she told Nilsen that she’d been present on December 28th 1986, engineering a session where Prince recorded a song so personal, revealing and intimate that he was horrified by what he’d done and kept adding more and more layers of percussion to the track until it was unlistenable, before encouraging her to delete the whole thing.

It was perfect: the best Prince song is one you can never hear.  Or at least, not the first take.  The next morning he returned to the studio and recorded an alternative version, later getting Eric Leeds to add saxophone and Atlanta Bliss to add trumpet.  It wasn’t quite as personal as that first take, but still so revealing that if any Prince fan heard it, it’d convince them that his artistry was greater still than any regular listener could possibly imagine.  The mythology was irresistible.  Even the title was mysterious.  ‘Wally.’  Who was Wally and what did it mean?

One thing we did know about the song was that it related to emotional problems Prince was experiencing in his relationship with singer and artist Susannah Melvoin.

When I was writing my book about Prince, I visited Melvoin and asked her if she’d heard ‘Wally’ and what she thought about it.  She explained she had no emotional attachment to the song, unlike others Prince wrote about her at that time, but that it was about a conversation between Prince and his friend Wally.

Wally Safford worked for Prince between 1981 and 1988.  Like all the people around Prince, his role changed dramatically as he went from bodyguard to back-up dancer to singer. But his most important role seems to have been confidant.  Famous people often have few they can trust, and with his fraught relationship with record companies, managers and promoters, Prince had even less than most.

In his recently published autobiography, Wally, Where’d You Get Those Glasses?, Safford reveals that like most people around Prince, he noticed things he’d said to him showing up in his songs.  That reference to “’66-’67” in ‘Alphabet Street’?  This doesn’t just refer to the date of the car Prince is driving, but riots in Wally’s Detroit neighbourhood.  “Old Man Johnson” in ‘Raspberry Beret’?  He ran Wally’s local gas station and candy store.

Safford devotes a whole chapter to ‘Wally’. At the time Prince wrote the song, he’d stopped doing press or posing for pictures.  His former bodyguard Big Chick had sold stories to the tabloids and Prince felt stung (that’s what the song ‘Old Friends 4 Sale’ is about).  At soundchecks over the years, Prince had been writing a song that’s appeared on bootlegs as ‘Billy’ or ‘Billy’s Sunglasses’ but was actually called, Safford suggests, ‘Billy, Where’d You Get Those Glasses?’.  It was about Wally’s brother-in-law, Billy Sparks, who had a minor role in Purple Rain where he was distinguished by his outsize eyewear.

Like many songs, this never reached official release, although it exists in a fifty minute version that suggests a different direction Prince may have pursued where experimental art-rock might have become more significant to his sound in the second half of the 1980s.

One of the biggest surprises about ‘Wally’ when it finally leaked was that it began in the same way as ‘Billy’, only now it was Wally’s sunglasses Prince coveted.   Sanford had been with Prince when he went to buy the engagement ring he planned to give Susannah Melvoin, and writes that he didn’t need to hear the song because he knew it referred to their conversations.

Wally’s revelations complement the self-serving nature of the song.  Although the lyric in the existing version is still an expression of pain, it’s clear that Susannah’s complaints in the song have been inspired by some bad behaviour on Prince’s part.  He sings about how she says she doesn’t love him as much as she used to because of an indiscretion on his behalf.  Normal relationship stuff.  But bitterly hurt by this, Prince takes revenge by asking Wally about some girls he knows.  Wally explains that these girls were identical blonde-haired twins they met in an upscale African club in Paris.

Safford believes Prince wanted the song erased because “he didn’t want everybody to know who he really was.”  But his complex love-life was hardly unknown.  It’s significant musically because it has the sound of his greatest era, and could fit happily on Lovesexy, on which he sings about going clubbing with another confidant, Greg Brooks.   Still, for all the emotional nakedness of the track, it’s less like a holy grail than a song about which Prince was right to feel ambivalent.  Perhaps his real reason for erasing the first draft wasn’t fear, but the sure instinct of an artist: he knew it needed to be transformed from a raw cry of pain into lasting art, and it’d take at least a couple more drafts to get there.