Where Do We Live Now? Part 5 – Will Burns 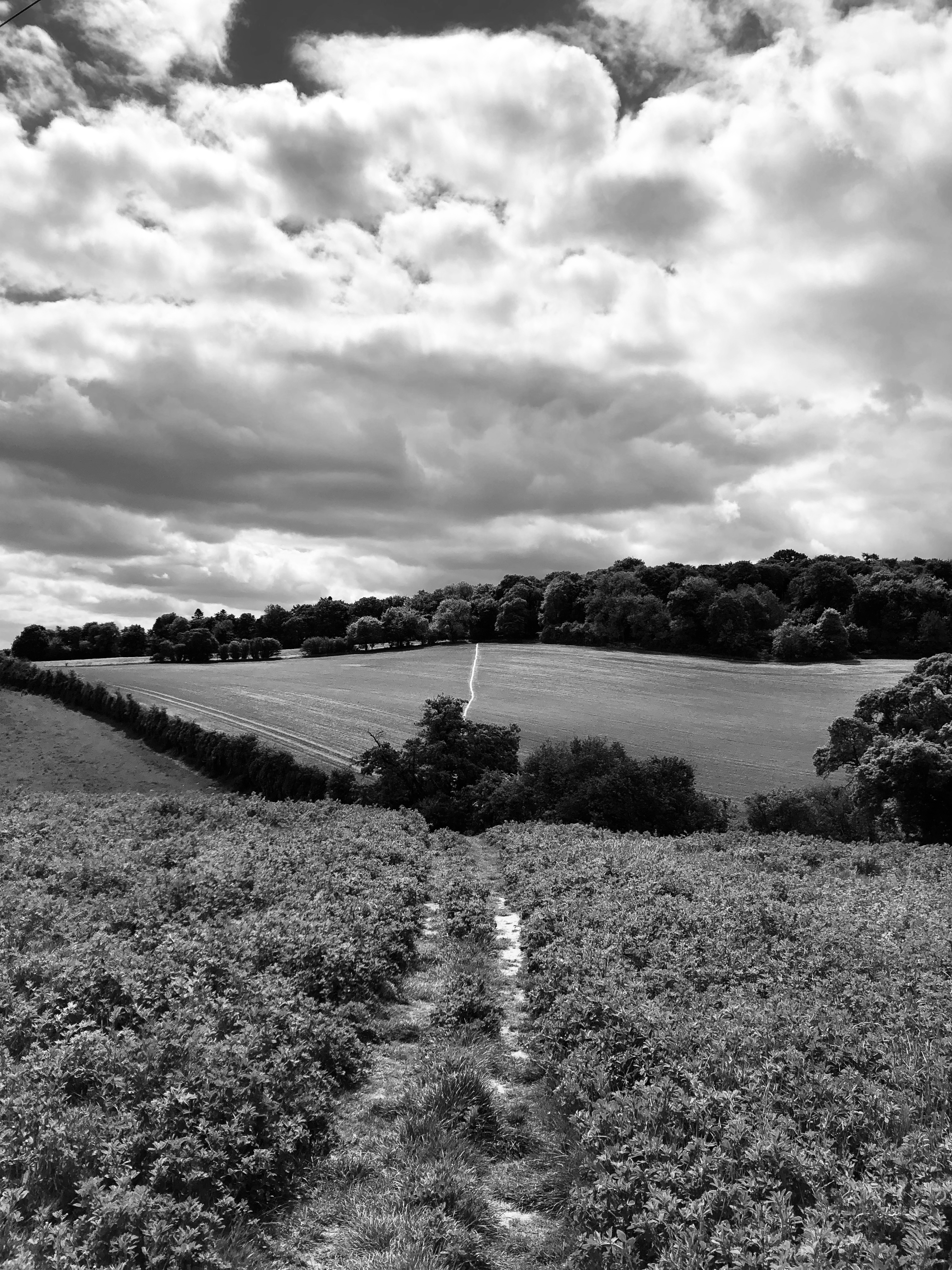 Lonely, fraught, strange days. I am up at four with the sun and the birdsong. My days have taken on the rhythm of these non-human things, beginning in dim light and settling into the long lull of the afternoon before a brief flare of energy as the evening turns into the night. My walks are at dawn now, avoiding the increased traffic along the towpath, in the woods, on the hills. Up at the monument that stands at the highest point of Coombe Hill people are luxuriating in the new freedoms. The car park at the top overspilling, people having picnics. By late afternoon the grassy hilltop surrounding the austere spike memorising the dead of the Boer War is littered with beer cans and crisp packets, plastic bottles, clingfilm. More dog shit. Even at our lowest point we will find it in ourselves to desecrate the earth. One afternoon my mother takes a couple of recycling bags up the hill and clears up a bit. The large commercial bins that the pub would easily fill every week normally are mostly empty these days. They can accommodate a little extra. From the top of the hill, with its view across the vale, out over a landscape of farmland and small settlements, four counties on a clear day, the field below and to the east with its growing little community of portaloos, trucks and vans all beginning the next stage of the HS2 work, I walk south away from the monument along the Ridgeway and down the opposite side of the hill. Downhill through the beech woods, the bluebells and wild garlic passed from full flower and now gone to seed, the light modulated through the greenscale of the layers of beech leaves in the canopy, the odd ash, rowan, hawthorn. Woodpecker, blackcap, thrush, goldcrest. Heard more than seen. Down past the farm at the bottom of the wood, on the corner of the road that skirts the hill I take the footpath as it crosses the grounds at Chequers. Warnings about straying from the path, CCTV cameras on the fenceposts. I take the path across the grass and look to my right over the large estate park, cleared of all but the odd tree, a few sheep grazing the grass. Crows and rooks are the place’s birds. Kites, a buzzard.

After the last couple of weeks it’s hard not to think about the proximity of this place, of its purpose, its people. I find it occupying my thoughts, drawing my eye. I find myself walking this way day after day and wondering if any of ‘them’ are here, what future is being imagined in those old rooms. A helicopter passes and I read it like augury. I take up positions relating to the place, attempts at parsing some meaning in the fact of the house being here, or perhaps just being. It is a monument of its own, of course. To the almost limitless accumulation of its associated class for two hundred, three hundred years… perhaps more. To the complacency of power at best, to its callousness at worst. Either way, to violence. Displaced violence here, where all things are kept conveniently at arms-length.

Edward Abbey describes the ‘fondness’ he believes the owl has for its prey, ‘the genuine affection with which the owl regards the rabbit before rendering it into edible portions’. He wonders if the feeling is in some way reciprocated, if the rabbit feels, finally, some sense of peace or such like at the ultimate act of being eaten. As if the life of the rabbit is anxiety, somehow—the constant anxiety for food, for sex, for shelter, and death (at the right talons) the resolution of that anxiety. The surface violence of the world seems easy for Abbey to anthropomorphise despite his own instinct, his desire to avoid it. For him, the question is whether the rabbit feels a kind of love at the end. ‘How can we speak of natural enemies in such a well organised system of operations and procedures? All the time, everywhere, someone or something is dying to please.’, he writes. I’m unconvinced, now, by his argument. It relies too heavily on a quiescence to hierarchy, to the acceptance that what is, is ‘well organised’. Abbey betrays his own wish to see the world as things beyond the bounds of taxonomy, of category. Surely the rabbit does not classify itself as simply ‘prey’. It cannot know the word, for words are our own special degradation of the world. In Abbey’s America, any facade of organisation, of order, looks like it is crumbling by the day. Generations of violence, of the stacked cards of industrial capital, of wealth and the racism and injustice that are so enmeshed with it, indeed that have generated it, are once more working their way through society via power structures that appear ever more brutal, even sadistic. Peaceful protest some plead. As if they haven’t had that chance before and ignored it. Who could watch and not want the rabbit, finally, to turn on the owl and burn his roost to the ground? Enough, the owl must come to understand. Enough.

I realise of course that I play my own part in the violence of my times, that I inherit the violence of times before me. And we are perhaps, no better off here than in America, certainly no less implicated, no more innocent. I look down the hill at the brickwork of this eminent building that sometimes seems to exult in its place here in the hills, and sometimes seems sullen or sheepish, hidden in the wild service trees that surround it. The brick of that house is pointed with the blood and bone of all the crimes of industrial exploitation, all its environmental ravages. In the act of parliament in which the house was gifted to the nation as the Prime Minister’s country retreat, then-owner Sir Arthur Lee wrote that “…the better the health of our rulers the more sanely will they rule and the inducement to spend two days a week in the high and pure air of the Chiltern hills and woods will, it is hoped, benefit the nation as well as its chosen leaders.” I wonder if the building takes its share of blame, too, when its malignant aspect appears to be in the ascendent. It sits brooding at me today while the government (its government?) appears to be opting out of any last semblance of sanity. Guilt and shame bring their own sedimentary recriminations, of course, and the plain truth is that these walks are the least of my own indulgences. I am too eager to feel like this, to crow about my own inadequacies in order that they might count as conscience. Dormancy is our crime out here in England’s well-fed middle—leafletting for the Labour party or making coffee at the local party’s monthly reading group in the Lantern strike me now as postures, or worse, as acts I might have simply imagined. Walking and reading are not enough, it occurs to me. Perhaps they never have been.

My reading matter comes from the shelves in the spare room I find myself living in. My own books remain packed up in boxes in the garage. A symbol of the impermanence of this arrangement. The books are my parents’. Their little library of the American West. I re-read Rachel Carson, Mary Austin, Gretel Ehrlich. Books I remember from childhood and which created in me a strange and lasting longing for America. I desired its music, its literature, its food. But most keenly I wanted its vast and wild spaces. For most people my age that might have meant travel, but for me that was simply impossible. My generation’s own colonial gesture—gap years and cheap international flights, the shrunken post-internet world, ‘doing’ south Asia, Africa, Australia, America—a new version of individuated grasping, the newly globalised world of the wealthy. The ironic gesture of its borders. I would have loved, of course, to see these places, but the thought of travel even now, makes me sick. So I stayed here when the exotic trips were being had, just as I did when the universities took my peers away from here, and then the City, then home-ownership, then children. I read and listened to records and made places and times out of my imagination. Reading Edward Abbey again I’m struck by the sublime confidence with which he walks through the land, a confidence that reads to me today as yet another colonial posture. My friends from school moved through the world with the same sense, I think—they descended on markets in a foreign country with the power to purchase, they caroused in foreign cities knowing real danger was a statistical anomaly. Strippers in Las Vegas, drugs in the Balearics, the cheap yet-to-be spoiled paradises of Thailand. All there for the consuming. Abbey has on one hand a deep knowledge and connection to his places, but on the other a too-easy disdain for people unlike him, the innate sense of his own primacy, that almost without his noticing slips into casual racism, misogyny. At times I put the book down and think he is the perfect guide for the times, that the mistakes we are still making are in his tradition as well as the traditions he saw as his opposites, his adversaries’—the traditions of ‘progress’, of the developer, of the market.

Having crossed the grounds at Chequers, I take the path across a wide field. Here, in the early mornings or late afternoons, skylarks—sometimes perceived just as song, as a flute-like tone that seems to burst, disembodied, birdless, out of the blue—climb in stages high into the clear sky, or descend back into the grasses of the fields and their hidden nests. I stop and record the song on my phone. I have long given up trying to photograph them. The song is enough. Enough for what I think to myself. I have nobody to play the recordings to. Perhaps I keep it for some far-off winter day. A hedged-bet against another season.

Where Do We Live Now? Part 4

Where Do We Live Now? Part 3

Where Do We Live Now? Part 2

Where Do We Live Now? Part 1