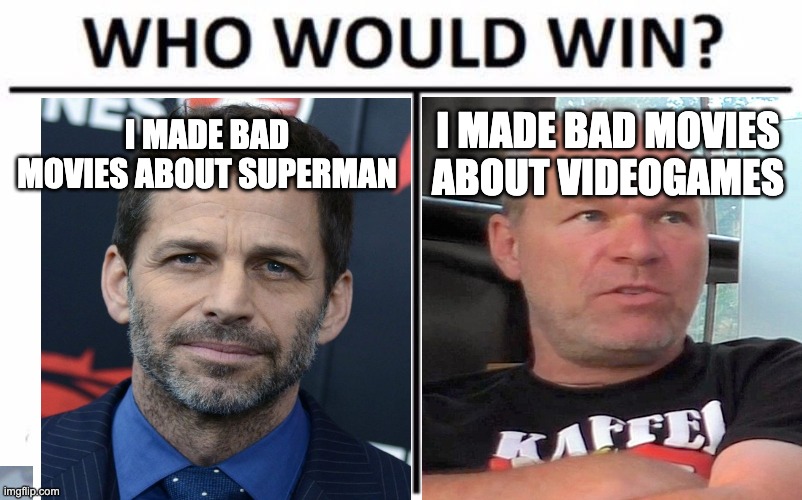 It was a typical Friday night in. I put on Netflix and chose Army Of The Dead as my evening’s entertainment. I’m a hardcore zombie movie fan, and the director, Zack Snyder, previously made one of my all time fave zombie flicks (Dawn Of The Dead remake, 2003)  Therefore, my reptile brain’s two-plus-two-equals-seven logic predicted some good, gory fun. Alas, like the British farmers who voted for Brexit, I was sorely disappointed: a lengthy, hollow, Burger Sauce-Minus-The-Burger of a movie that lacked any bite (pun intended). 2 hours 28 minutes of my life I’ll never get back.

So I went online and spoke my dismay into the vacuum of indifference that is Twitter and went on with my life.

I woke up the next morning, and lo and behold, my mentions were flooded by Army Of The Dead fans who weren’t at all pleased with my extremely lukewarm take:

You might be wondering “why are people this vexed over a zombie movie”?Well, it’s because Zack Snyder also made bad Superman movies.

And if you’re asking “what now?” here’s a quick, brief explanation:

A long time ago, in schoolyards all over the western hemisphere, there was a great rivalry: Marvel Comics (who make Spider-man, X-Men and the Avengers) and DC Comics (who make Batman and Superman and Wonder Woman). Everybody had favourites and (mostly) boys would argue over which superhero would beat who, and why your answer wasn’t Wolverine.

Come the 21st Century, Marvel Comics created Marvel Studios – the reason your children refer to Multiple Academy Award Winning Actor Anthony Hopkins as “Thor’s dad”. They made several average-to-amazing movies, starring men and women dressed in brightly coloured spandex, punching computer generated thingies in the jaw, and snark, so much snark. They did this for ten years, crafted a “shared cinematic universe” where Black Panther would cameo in a Captain America movie and Hulk in a Thor movie and so on, til all the superheroes had a big ol’ get-together in an Avengers movie and make all the billions of dollars. Audiences loved them, and now every summer the main event in multiplexes is “Marvel’s [Insert Title here]” Watch this fan video of actual adult humans reacting in the cinema to the last Avengers movie.

DC Comics fans were desperate to see their own shared cinematic universe. After all, Superman, Wonder Woman and Batman are arguably the most famous superheroes of all time. So Warner Bros (who own DC) hired Zack Snyder to direct Man Of Steel – a grimdark, grey toned, frowny-downy, massive death-and-breathless-destruction movie about an alien boy scout (who – in a previous, far superior movie – spun the whole world back in time because he wouldn’t let a single person die) and traditionally wears big bright red pants on the outside. It didn’t really big in the big bucks, or the accolades. So, naturally, Warner Bros hired him again for Batman Vs Superman – a grimdark, po-faced movie about a billionaire who dresses as a bat, fighting – and forgive me as I stress this point – An Alien Boy Scout Who Traditionally Wears Big Bright Red Pants On The Outside. Again, Zack was consistent in delivering a not very good movie. But whiteness only fails upwards, so this year, he burnt through SEVENTY MILLION DOLLARS making a four hour “Zack Snyder Cut” of the box office flop Justice League, and… mate, it’s four hours long. Show me a bad film that got better when it got longer and I will show you a credible defence of Bill Cosby.

DC Comics fans, in a state of denial only matched by Trump voters, refused their own eyes and yawns and declared it was the everybody else that’s wrong. They claimed the critics must’ve been bought off by Marvel, or are straight up DC haters, or feminists, or all three. They are extremely vocal online, have taken to harassing anyone who says a bad word about Zack Snyder. Normally, celebrities and movie studios never directly engage with the virulent underbelly of their franchises, calling them “passionate” and trotting out some milquetoast, black-square-esque statement like “we are against all forms of harassment”. But that was then, and this is the 21st century where up is down and Zack Snyder lent his support for a mob of angry comic book fanatics, which has legitimised their toxicity and only made them even more angry comic book fanatic-y. Which is how we ended up with this article.

“Why are so many people so devoted to defending the honour of a man who makes objectively terrible comic book movies”? I asked.  Also, what about Uwe Boll?

Well, seeing as you don’t want to Google for yourself: he’s a german director with the record for the most videogame-to-movie adaptations.  Every one of them starred at least one big name actor, and every one of his movies is a 10-carat cinematic turd. Uwe Boll makes movies like Godzilla does city planning. Alone In The Dark, starring Christian Slater, is ranked as one of the worst movies ever made.  Take a look at this trailer for Bloodrayne (starring Academy Award Winning Actor Ben Kingsley) and tell me if anything you saw on screen was created to entertain you.

A lot of videogame fans hate(d) him, writing petition after petition asking/begging him to just stahp, pls. Uwe eventually did after a decade of stinkers and, thanks to a German tax law, his movies made money back, even though they were all cold blooded flops. No, I don’t understand the math either.

It’s not like video game culture is any friendlier, more mature or understanding than comic book culture.

Maybe it’s down to the timing: Uwe Boll was scarring cinema-goers in the early to mid noughties, while Zack Snyder’s Angry Superman Trilogy started in 2013, which was around the same time a certain Social Media Network was reaching peak toxicity.

Maybe what Uwe was missing was a rivalry: if, say, Steven Spielberg made amazing Super Mario movie and Uwe Boll gave us a Sonic The Hedgehog turkey, we’d have thousands of sock puppet accounts with a picture of Sonic wearing shades as their profile picture, DMing death threats at any movie critic who dared insult The Boll.

Maybe it’s because Uwe didn’t pander to geek culture, at all: he (in)famously hated gamers and was simply taking advantage of greedy game publishers and German tax exemption laws.

Now, technically, you could argue Zack Snyder is the better director: his films are prettier, much, more competently made, scored better with critics and made more money. Dawn Of The Dead (2003) is a legitimately good movie. I can’t even recommend one Boll film, not to my worst enemy, not for a mountain of gold.

But no one should ever be harassed over their opinion on Bright Panty Man Movie. So, in the same way Tom from Myspace is better than Mark Zuckerberg because he didn’t create a Qanon-multiplying hatespace, Uwe Boll is the better director, sorry.