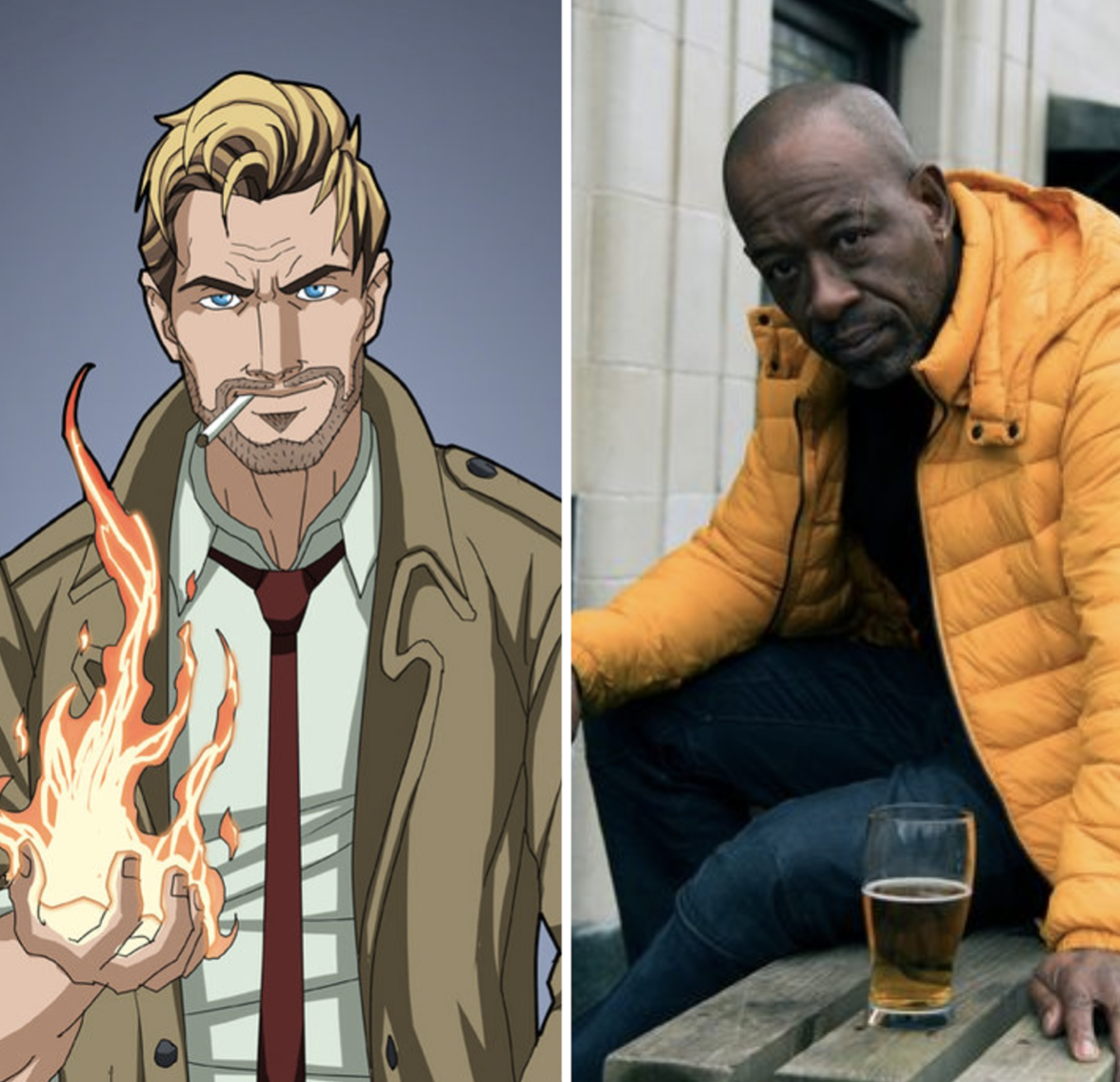 John Constantine aka Hellblazer is what you’d get if you wanted Sherlock Holmes, but as a blonde haired, yellow-trenchcoat wearing Liverpudlian,who skulks around the grimy under-garms of London, dabbling in the otherworldly and bringing tragedy and despair to everyone near and dear to him. A Diamond Geezer. Columbo in the UK, via Hell.

Created by Alan Moore, Rick Veitch, Steve Bissette, and John Totleben, he debuted in the comic book Swamp Thing before becoming his own series on DC’s “Recommended For Mature Readers” imprint, Vertigo. I’d absolutely recommend the Garth Ennis’ run (#41–50, #52–83, #129–133) for some brilliantly written, wholly English, darkly humorous and often tragic occult detective fiction. It’s some of the best storytelling in any medium, let alone comics, and like most good things on God’s Brown Earth, it’s been repeatedly ruined by Hollywood.

First, there was John Constantine, the movie, starring DARK HAIRED, BLACK JACKET WEARING Keanu Reeves and set in LA. It’s the two hour equivalent of Microwaved PG-Tips With The Milk Put In First. Peter Stormare and Tilda Swinton bring some class to the affair, but Keanu Reeves should never play an Englishman again. Twice is enough. Please, Keanu. Stahp.

Then, there was Constantine, the TV series. English? Oi. Blonde hair? Daffodilly, mate. Trenchcoat? Yellow as the sun’s arse. London? Eh, fancy Pennsylvania? Cancelled after one season, it was the TV series Supernatural with a ‘Bollocks!’ thrown in every now and then. A Versace dress worn by S Club 7.  Macbeth re-interpreted by a bubblegum wrapper. Vapid stuff.

And this is where Save Me comes in.

Save Me is a series starring Lennie James as Nelson “Nelly” Rowe, a witty, yellow puffer jacket wearing hustler, who rummages around his estate and London, constantly dabbling in things beyond his range and regularly bringing tragedy and despair to anyone near and dear to him. Diamond Geezer.  And I know what you’re thinking, you looking at the trailer above and going “hang on, Joshua. I don’t see no blonde, trenchcoat wearing white dude in Save Me. I don’t see no Occult Detective Fiction”. Well, sure: if you’re only interested in the surface details, Constantine TV series is all yours, you brand-store-product loving heathen. But, if you scratch a little deeper, you’d see Save Me’s Nelly Rowe is the most accurate depiction of John Constantine to date, in the stuff that matters. I’m talking about tone, character arcs, motivation, attitude, personality, relationships… the good shit, what Constantine is really about. Nelly is John Contantine in all but name, and I’d wager a fair amount of dogecoin the  Save Me writers are Hellblazer fans

But you’re not reading to take my word for it, are you? You’re here for a solid listicle backing my claim. Well, look who’s got two sleeves and a listicle up his arms? (Me. The answer is me).

1. Save Me And Hellblazer are both set in London. Result.

2. Nelly and John, the similarities.

Let’s start with the obvious: they’re both Englishmen. They both love banana-tinted menswear: John’s got his trademark trench coat, and Nelly’s never seen outside without his bright puffer jacket. Both have a demeanour that can be described as “cheekier than they have any right to be”. They both prefer using their wits to get out of entanglements (Nelly gets into bed with his married ex when she’s vexed with  him, with the champ line “you know I always liked the look of ya”, and Constantine once sold his soul to three separate demons in hell and had them all fight each over who had the more legitimate claim) and lastly, they both have, buried underneath that thick  ne’er-do-well demeanour, a sense of moral duty, an inclination to do the right thing, to fix what’s been broken, to help.

Which leads me on to my next point:

3. Good Intentions Or Not, Everything They Touch Turns To Shit

Nelly’s daughter, a girl he’s barely met, goes missing, and so Nelly decides to shake London upside down in the hopes she’ll fall out out safe and sound. Without spoiling anything: he abuses the friendship and care of all his mates and acquaintances. He trashes the car of one of his girlfriends, causes another girlfriend (he has two girlfriends, both living in the same borough. Diamond Geezer) to relive her trauma, almost destroys the relationships of two separate male friends. He lies, coerces and hurts, his stern belief that finding his daughter justifies any means, but he (mostly) gets away with it because he’s such a loveable rogue.

Meanwhile, John Constantine has the literal spirits of all his late friends, the ones who died as a result of his actions, following him about. He has a lot of ghosts. They’re pissed at him, sure, but they’ve mostly let him off because he’s a mate, he was trying to help. Especially as he generally gets the job done.

4. They’re both always in over their head and there’s always a price (for someone else) to pay.

The best John Constantine stories (again, Garth Ennis. Also check out Mike Carey’s run) are the ones where he swaggers in like the great I Am, maybe to exorcise some poor girl, and barely escapes his life, said possessed girl the dragged body and soul to hell for her trouble, and everyone else who bothered to come along with John now extremely dead. John Constantine is often fighting against supernatural entities way beyond his measure, and while he sometimes gets the better of them, it’s often on someone else’s bill. I mean, one time, John goes to hell to save a woman’s soul, and tries to outwit the devil, and It goes exactly the way you would expect.

And Nelly? Well, his daughter’s kidnapped, which goes exactly in the direction any story about a kidnapped girl in London would go. Nelly barrels in, hindering as much as he helps: one particular tense standoff, Nelly tries to finesse a child trafficker and his scheming spectacularly falls apart. It’s just so dark, and so Constantine, what none of the previous  adaptations ever managed to nail down, the core of John’s character.

He’s a Diamond Geezer, But He Comes At A Cost.