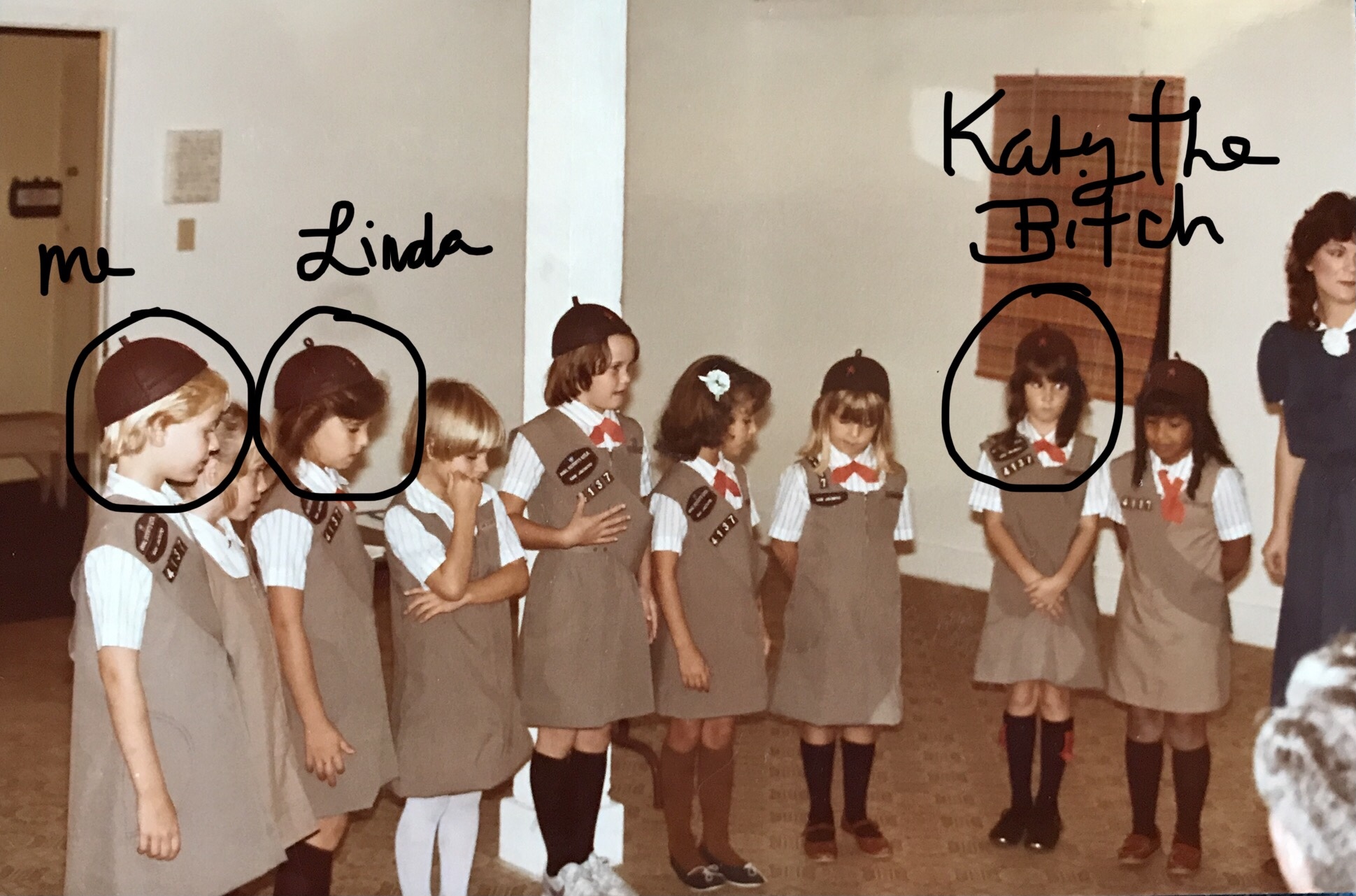 Today Katy is
such a mother
fucken bitch.
I hate her guts so
much that she belongs
in hell. She the
Uglyest, trashest,
stupidest, fuckest
mother fucken
assole damn
hell Ass
Fucken bitch,

I’m sat, Indian-style, on the beige shag carpet behind Katy’s parents’ black leather sofa from Finger’s Furniture, hunched over, furiously writing the most hateful words I can think of with a No. 2 pencil in my mini orange ruled notepad. The carpet is making me itch in my itchy Brownies uniform. Katy slapped me. My cheeks sting. My hair is tangled, thin strands stuck to my neck that Katy pulled out when we wrestled on the floor. Now there’s rug burn on my elbows and knees. We’re both out of breath, half-hysterical after nearly killing each other, this is the worst fight we’ve ever had.

You shouldn’t have bragged about getting the Madonna tape cause maybe then you would have gotten it from ME! I scream at her. I hate Wham!, YOU KNOW I hate Wham! she screams back at me. It’s the day after her birthday party at Physical Whimsical and I got her the Wham! ‘Make It Big’ cassette when all she wanted was Madonna. She beat me up over it, so now I’m taking out my revenge on the page.

Then I panic. Have I gone too far? Is yelling at the devil to bear witness going too far? Will I be the one that goes to hell?

Thing is, I’d actually bought her Madonna’s first album on cassette at Camelot Music, but for like a week before her party she kept bragging that her mom was definitely getting her the tape for her birthday, definitely definitely; she wouldn’t shut up about it. So I kept the tape for myself and bought her something that I was sure would disappoint her, even though I ended up feeling sad and guilty as I watched her unwrap it after we played Skee-Ball. But did she really have to rub it in my face like that? She knew I was already jealous that her mom was paying for a birthday party at Physical Whimsical when the best I’d ever gotten was ShowBiz Pizza Place.

So now I’m in her living room rubbing it in HER face, blasting ‘Burning Up’ through my Sony Walkman while I prance about in my chocolate knee-highs. Our worst fight ever starts because she rips the fuzzy headphones off my ears and snaps the plastic.

Physical Whimsical was the ultimate children’s paradise nestled in the food court of Sharpstown Mall. The psychedelic experience was the closest I got to acid before tripping for real. Rainbow bright iridescent sugar high, all that: Fun Dip, Pixy Stix, Cracker Jacks, Tangy Taffy, Nerds, Wax Fang Lips, Pop Rocks, Now and Laters, Smarties, Life Savers Lollipops and Candy Cigarettes. And now we’re getting silly billy, can’t keep hold of this water willy from the Trick Can, HA HA HA! I squirt you with Disappearing Ink while you lick that Ring Pop. Let’s get lost in The Glass House, get short with the Midget Maker, get large with the Giant Faker. Press your body on the wall in The Shadow Room, make our own ‘Sound Of Two Hand Angel’. We had fun that day anyway, but the way her parents loved her bugged the shit out of me. She got everything she wanted. I don’t think they ever even hit her! Her home life seemed so uncomplicated. Actually, her dad seemed straight-up simple, to be honest. He reminded me of my dad, my dead dad, the way they both looked like 70s porn stars. Both stoners. Even though my dad died when I was five, and the only way I knew him was through photographs, I could still tell he had more brains than Katy’s dad. And get this; even before her party at Physical Whimsical her parents bought her a waterbed for her birthday too. A waterbed so big it barely fit in her bedroom. In fact, it had to sit in the room at an angle that meant she couldn’t close her bedroom door properly. For me that made it a nightmare. Didn’t she have dark secrets to hide in there, on the waterbed, in her bedroom? And this will really make you barf; the way her parents surprised her is they waited until she fell asleep in their Dodge Caravan after a meal at Arby’s, then laid her on her surprise waterbed so she could wake up on it in the morning. Jesus Christ. I couldn’t begin to imagine.

That’s where we made up. On the waterbed. But not her waterbed, because wait till I tell you, we made up in her parents’ waterbed. Two waterbeds under one roof, how ridiculous.

I don’t know if you’ve spent any time on a waterbed. They’re gross. They’re not relaxing or romantic in any way. There’s no ‘free flow’ as promised in those Gallery Furniture ads, the waves are choppy. The bedsheets constantly come off the bed, curling up on the sides, at the bottom, so eventually some part of you, your toes or a shoulder or thigh, touches the bare rubber, and it’s sticky in that tacky way, you peel away like gum. And the sound of the raw rubber squeaking against the wood frame is deeply repulsive. I always imagined there was mildew in the corners. And dust. Dust is sure to give me an allergic reaction so I stay in the middle of the bed pushing Katy’s rings in and out of the velvet casing in her musical ballerina jewellery box (yes, another one of her birthday gifts) while she rummages through the drawers of the bedside table. It’s there we find the secrets. Her dad’s stash of Penthouse magazines. We flip through the pages slowly, stunned, and in complete amazement spot the list of phone sex numbers in the back. The temptation to call is irresistible, now that our cat fight is over. She dials and we both hold our ear up to the see-through fluorescent Conair receiver. At first, there’s silence, a slight whoosh and a low hum. Then the recording starts. We know it’s a recording because there’s a click and a warble then the first voice. We’re both a bit relieved that it’s not real live people on the line; we haven’t the slightest idea how to talk about sex in a sexy way. We listen for ages. A captain on a ship invites a surprised stewardess to his private cabin. She sounds blonde, all bubbly laughter when he unzips his pants to reveal his OH MY SO BIG ‘anchor’. The whole scenario feels very Love Boat. I rip out a page from the magazine so I can call from my house too.

Any time Bob and my mom run an errand, any time they’re home late from work, any time they take the dog for a walk, I call the phone sex line. Since I don’t have the full Penthouse to flip through, I take Bob’s Bo Derek calendar off the shelf with the Avon ornaments and I stare at it while listening. I like the photos of Bo stretched out on her back on the beach, tanned and fully nude, and the ones with the natives covering her in mud. But what really gets me off most of all is when she’s in her white shirt, her wet white shirt, with her tits poking through the sheer fabric.

Of course Katy and I always ignore that little speech at the beginning of the phone call that states the cost per minute even though by now we’re both calling the sex line every day. But when the huge bills finally come through, Katy blames it all on me. No one is surprised. Katy says she wouldn’t be so dumb as to call expensive phone numbers, after all, she’s in the Gifted classes for smart students at school while I’m the one that’s been caught for lifting up my dress and letting Jacob Carol stick his hands down my panties. I mean it’s obvious, Katy says. What a bitch.