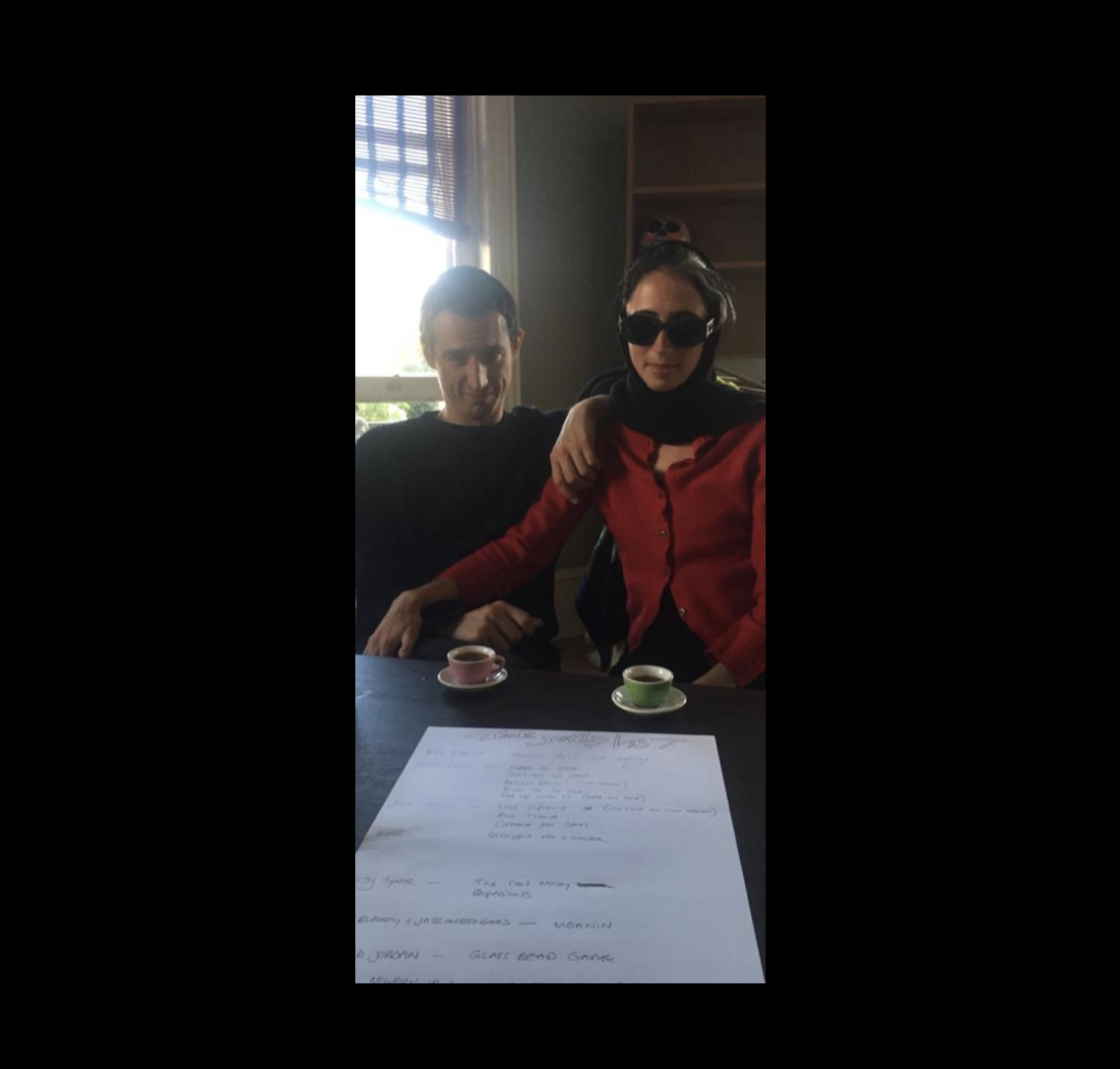 As luck would have it we received news that Lias would be DJing at The Social and this piece entirely by coincidence on the very same day. Except there is no such thing as coincidence is there.

It’s been a long time since I’ve spoken to you, you who kept me going through the darkest stretch. If we hadn’t found one another, I might well have withered away. I do have excuses. They’re not particularly strong, but I’ll field them all the same.

I had a book to finish co-writing. What’s that like? Co-writing you say? Think of it as a two-way exploration of patience. Once that was out of the picture, I entered into a lengthy bout of push and pull, whine and groan with CoV-19. There seems to be some speculation as to whether ‘long covid’ even exists, whether it’s not just a standard post viral thing that’s been hyped too much. Inexplicably feeling like someone has taken a baton to the arches of your feet – a la Midnight Express – for three months is bad enough, the non-restorative sleep is derangement incarnate. I’m not sure semantics really come into it.

I’d like to tell you more about that experience, about my lurch into the nether regions of pandemic scepticism out of sheer resentment. About contracting the thing in a remote village on the south east coast of Ireland, trapped on a depressing cul-de-sac with a moderately well-known, attention starved Irish novelist, the Enochian ritual turned sour that proceeded our dual contamination, bringing all self-mythologizing to a temporary halt, leaving us with nothing but fetid humility, a shortage of Panadol and the European cup upon which to make do. I’d like to go into it, but I’m still processing.

So how is it? Having some semblance of your life back? Maybe not all that much changed for you. Maybe it was a welcome break, a necessary pause? A total fucking disaster? My life has changed shape considerably. I’ve found a place to live and – much more crucially – someone to live there with. We have book shelves, potted plants, a subscription to the LRB and every other week someone brings a box of vegetables to our door straight off a farm. I’m all for the LRB but I’m still coming to terms with the veg box. It feels like too much of a leap, from Travel Lodge man to veg box man. I feel like it compromises something deep within me, that esoteric heap on the kitchen table every other Friday morning, sheaths of Cavalo Nero like some extricated fabric from the world of avant-garde Japanese couture. You don’t even get to select which veg, they just send whatever it is they feel like. For weeks now the bottom compartment of our little fridge has been choking on Padron peppers. Padron peppers are a food of absolute incident. They’re what you get bought by a record label attempting to grease you up in a bar in Austin, Texas. They have no place in the home.

I’ve wound up moonlighting as a DJ quite regularly in order to make the rent. Around the release of our last record Baxter Dury put me in touch with a booking agent. Since then, like mana from heaven I will occasionally be offered lucrative slots playing tunes to random gatherings of people. The weekend before last I had two of these back to back. Harvest hath come at last! On this side of the ‘industry/people who actually make the music’ divide it’s perhaps the only easy dollar left. I hear over in Berlin and even in France they have all kinds of public support for people wasting their lives in bands. If true, I’m not sure that’s entirely a good thing. Sure, the scene will get progressively more and more bourgeois here as a result of its total absence, but eventually this will inspire a gang so dedicatedly scrotal in their outlook and general demeanour, so concentratedly obnoxious in their refusal of all that, that indie music with guitars might just become fun again for five minutes.

I have a terrible feeling I’m repeating myself. Anyway, I digress. I was up in Manchester DJing the weekend before last and I ended up having several large slugs of cocaine mixed with ketamine blown up my ass with a straw. I’m not going to pretend I’m not just a tiny bit proud of this. Sad, I know, but it did feel so very empowering. I seldom do drugs anymore. I’ve watched them ruin enough lives, although to be fair, those lives weren’t looking like shaping up to all that much anyway. I really don’t want you to get the wrong idea. It’s not a regular thing for me. I don’t show up to parties thinking I’m one of the Mac or anything. It was a precautionary measure. ‘Long covid’ or whatever you want to call the ailment I’ve been unable to shrug off for the last three months, ravaged my throat worst of all. Cocaine really fucks with your throat. Obviously, I shouldn’t be touching the stuff full stop, but like yourself I’ve been sat indoors twiddling my thumbs for the best part of two years. The excitement of being able to get out amongst it all again trumped my sense of self preservation. DJing is easy, but not if you’re bone dry sober. In fact, if you’re bone dry sober it’s actually quite upsetting. So, up the shoot it went.

The Manchester gig was ideal. Thronged with easily impressed students, kids yet to bask in the raw passion of Lil’ Louis or Adonis. Once it went off it stayed off. Granted the thing started horrendously though, both CDJs began flashing incessantly, baring the words ‘error report’ in red. Due to the excessive measure of ketamine in the slug pre-stage it took me much longer than it should have to notice that the tune I was playing wasn’t going anywhere, at all, just rolling around and around in one torturous loop. The hazards of dabbling in dance music I suppose. It wasn’t until I noticed several girls in the front row grimacing in my direction that I realised something had run amuck. By that time the sound man had heroically mounted the stage to inform me that one of the decks was suspect, to beware of something or other, I couldn’t really make out what he was saying.

The next day I felt relatively unscathed, went out and had a stroll in the sun, a spot of lunch with a friend. I’d been able to get a reasonable amount of sleep, the awkward and time-consuming ritual that rectal ingestion of narcotics demands having shielded me from over indulgence. When you first get addicted to cocaine, when you’re young, your poverty shields you from going too far. The second you have any kind of economic traction you’re prone to disaster. Perhaps – in the name of moderation – widespread adoption of the arsehole route is the way forward? That much fabled middle ground between use and abuse? What’s more, it opens up an opportunity for you to test the fealty of your nearest and dearest, and, on the flipside, drags a sorely needed breath of humanity into the equation: if one is going to insist upon this social poison, maybe it’s only fair game you become intimately acquainted with your buddies’ night-clubbed rose gardens in the process?

That same evening, I found myself playing to an almost empty car park in Birmingham. I don’t know a soul in Birmingham, so it felt a crushingly lonesome affair. The craft beer festival rep informed me that there had been a mix up with the power supply or some such misnomer, that usually the music would have been at the other end of the site, where 96% of the punters were congregated, quaffing themselves silly. I was on directly after ‘hip hop karaoke’, the conclusion of which some of the audience refused to accept, repeatedly demanding their chance to shine from me regardless. I had to inform them that the closest thing I had to any hip hop on my USB was a version of the Only Fools and Horses theme tune spliced with Eminem. That rappers delight was now very much off the menu. I was then assailed by a drunken Asian guy, demanding that I play something Indian. Obligingly, I stuck on the closest thing I had, Taj Mahal by Jorge Ben Jor. He marched back up a few minutes later with his phone, to show me a video of a bunch of low-slung Indian dudes in a convertible, blasting a rancid electro Bhangra from their throbbing front seat woofers. “Play that”, he insisted. “I don’t think you understand…”, I replied, “…I don’t have that”. “You won’t play them because they’re brown, innit bruv?”

In rendering death accessible at pretty much all times, is there anything more empowering than suicide? Or is that kind of proximity to the great beyond something that only adds to the worry? What’s to stop you from slipping into a particularly bad mood at some point and, without really thinking it through, just rushing for the exit? Is there enough raw male violence in me to survive the immanent fall? If things take a sharp turn to the Mad Max, is there enough pillage in me to provide for my own? Impossible not to let your thoughts drift into this kind of murky water when you’re lost in the Birmingham Bullring, searching for Ramen on a Sunday afternoon with a double hangover coursing through your blood. Other than the way people talk I have nothing against the city, but you have to ask yourself: how did they let this happen? Within its terrifying gravity even Google maps prolapses, the entire centre of town rendered a great plain of yellow digital vomit. You’re here to shop, not to navigate. Mystification is obligatory. One hour went by, then two. In some oblique quadrant of Selfridges, sweating internally, I came to what was left of my senses and gave up the quest. I would settle for a tuna salad, a pain-aux-raisins and one of those cold pressed green juices from Pret at the train station. For once in my life there was somebody waiting for me back in London who understood – a miracle of tolerance – she even seemed to care… I wasn’t about to expire searching for Japanese food in Birmingham, not now… no way out but through… I had to press on home.