Where Do We Live Now? Part 6 – Will Burns 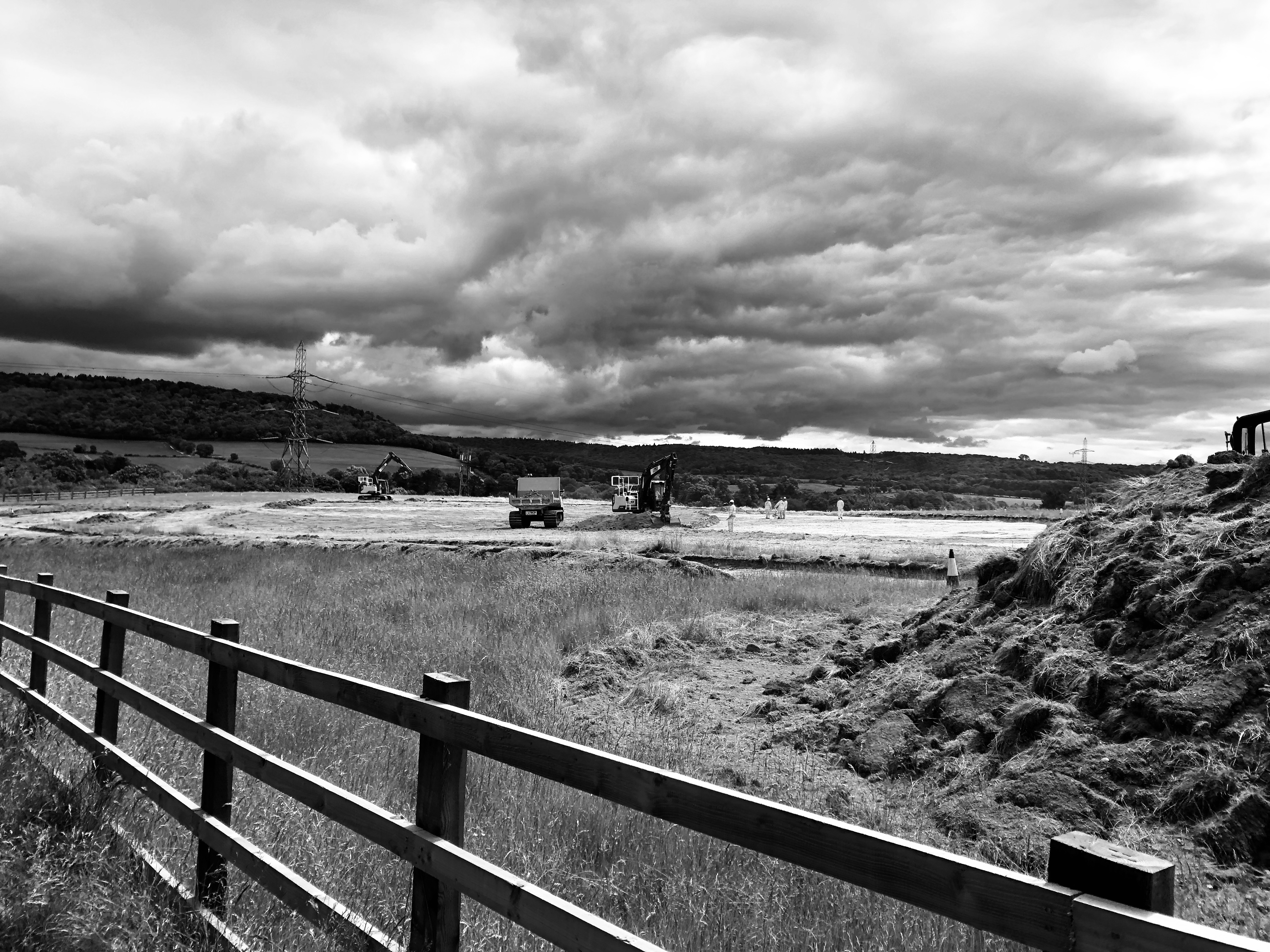 There are two fields, one to the north, one to the south, intersected by the road that runs through the middle of the village, a road that is both the high street, the locus of all commerce, the façade of our place, and a section of the Ridgeway—the ancient track that also once meant trade, goods, wealth, the movement of things. I take the path off the road and head towards the field to the south. A month or so ago, you could walk right across it, the footpath marked with an old sign at the edge of the field, and then declaring itself in bright white chalk through the lush early summer grass liberally yellowed with buttercups. Now the whole field has been fenced off, the thick wooden stakes and frame leading you right round the western edge of the field and out through a metal gate on its southern side. Half of the field has been dug up, churned into huge dry clods. The earth grey and dusty as concrete. The way we can take, the way we are allowed to take, is in the process of being managed, altered. Even out of doors, away from the petty boundaries of settlement—gardens with their fences, car-parking spaces, the delineation of ‘ours’ and ‘yours’, even here in what passes for the wild, we are affronted by enclosures, restrictions, reminders that all land is property, is a fact of administration, is the topographic expression of our cultural history and continued addiction to allocation and possession. Mary Austin wrote of the Californian desert (though she takes issue with that name) ‘Not the law but the land sets the limit.’ Here the very opposite is true. The land hereabouts is as much a legal document as a geographical phenomenon, though it is true that the fields are a kind of desert, as told by the current absence of certain birds and butterflies.

The field to the north of the road lies down a little dirt track, more chalk and flint, and just past the main cricket ground. It is a kind of mirror image of the other field. The same trucks, the same ephemeral buildings, or sketch-work of buildings. The footpath here, that runs around the base of the hill, through Coneycroft farm, has now been cordoned off by thick new fencing. Larks here in the late afternoons, and on a couple of evenings when I stop at the cricket club and wait and watch, I see a barn owl cruising over the long grass in the field. I sit on the concrete steps of the pavilion and look down the slight incline on the outfield, across the pitch, beyond the boundary to the north. I have spent many many hours here, both as child and adult. I think now of times when I watched the barn owls here as a teenager, when I should perhaps have been paying more attention to the game. Midweek matches, when a young player might have been given a chance in the first team, the game pushing its luck with the light, and me fielding somewhere close to the boundary, out of the action. And I remember how on Saturdays, playing now in the full sun of the afternoon, I would see mistle thrushes digging for worms around the nets while fielding. I never see them anymore, but I recall my feelings about them, recall their size, their posture, their pale duns and their freckled chest against the green grass. It might come as no surprise to know that a cricket club in a place like this has its own eco-system of status and snobbery. As kids we were well aware, somehow, that there were those of us from the big houses, all from the grammar school or even further up the food chain, and that there were one or two others. A pair of brothers who lived a few doors down from my grandfather on the council estate, a couple of Asian kids from the local town. And me, who being brought up in the pub, came from a kind of non-home, a strange, un-categorisable place that resisted the other boys’, or perhaps their parents’, sense of our somehow rigid social position. I felt these things sharply when I was young. That my parents’ work prevented them from attending games, that they didn’t belong to the tennis club, that the other parents moved in somehow different circles. But the feeling dissipated as I grew, and the adult team, which had felt so intimidating at one time, turned out to be a kind of haven for misfits as well as the grammar school kids back from the universities in summer. I played for a few years, for example, with a man called Robert, though everyone called him Bob. Bob Glue. I still see him now and then in the Lantern. He was older and I remember the first day he came to the club. He had his youngest daughter in a pram and stowed away on the shelf beneath the cot, he had a slab of lager. He stood for a Saturday afternoon and drank his beer and watched the game. He joined the club soon after and I spent every Saturday and most Sundays with him for the next few years. He had, he told us, of course been a very good player in the years before we met, and his four front teeth were missing from when he had missed one keeping wicket to his brother (‘… and he was quicker than you, Will’) as a young man. He’d gone off, he used to tell us, had thirty stitches in his mouth, and come back to the game to bat. Played again on Sunday. That night he couldn’t get drunk, he said, so for the first time in his life he’d drunk tequila. A bottle of it and he didn’t feel a thing. He’d tried false teeth for a while but he lost them or they lost him. Bob was a house husband, looking after his six kids while his wife ran a burger van out on the way to Oxford.

Late afternoon and evenings I sometimes see people sitting on the pavilion steps, some of whom I recognise from the pub. It is the re-enactment of a kind of version of their teenage years. Cans in the park, long listless summer evenings. No school, no work, no time. The pavilion’s aspect is a little like that of the pub. The windows and scoreboard boarded up, the square overgrown, the social function of the building and its things redundant. It stands and throws its shadow rather bitterly over the outfield. If nobody is there I stand in my position at fine leg or pace out my old run-up and stand at the top of my mark. I think about how it felt to be here just ten or so years ago, the same time of year, part of a long-disbanded team. So much was so different, and I remember that what I felt keenest, most strongly, in those years when I had remained here in the village long after my friends and peers had left was safety. I would look up at the hills from the beer garden at the Lantern in the evenings, or from the cricket pitch, or walking along the towpath and perceive with   a strange and deep intensity that nothing, somehow, could harm me here. I remember talking to a friend who was working in central London at a book shop on the day of the 7th July bombings in 2005. She told me how the shop had stayed open but they’d had no customers, how she’d felt sick all day with a kind of nervousness she’d never known before. How she forgot about the morning’s chaos for a minute, then remembered again with a sudden recall of pain and care and disbelief, and how that had gone on all day. She told me how at the end of the day there had still been no public transport in the central part of the city, so she’d walked down towards the river where she could get a bus south and home from Waterloo station. She’d described how she’d crossed the bridge with thousands of other people, all walking the same direction, the visible emptying of a whole city. And I remember at that time being relieved that I lived here in this small, inconsequential place. A place defined even now, with the world sick and burning itself up with the anger of those who have been robbed of ever knowing that very same sense, by its fundamentally being safe. Poverty, war, famine, even a global pandemic. Nothing would ever fully penetrate us here. Perhaps that’s why people are so affronted by the train line coming, by the desecration of the hills and fields. Not because they love these things, but because they believe, somewhere deep within themselves, that they should be beyond the reach of politics. The hammer should always fall elsewhere, as it always has. Standing on the outfield I realise though that there are things I miss deeply even among these things I despise. There is nothing simple in the connections I have to this place, which is the same for all of us living here. Inarticulate and angry, heartsore and defeated. Caught between history and the swiftness with which the summers of our own life pass. I feel suddenly old.