Where Do We Live Now? Part 7 – Will Burns 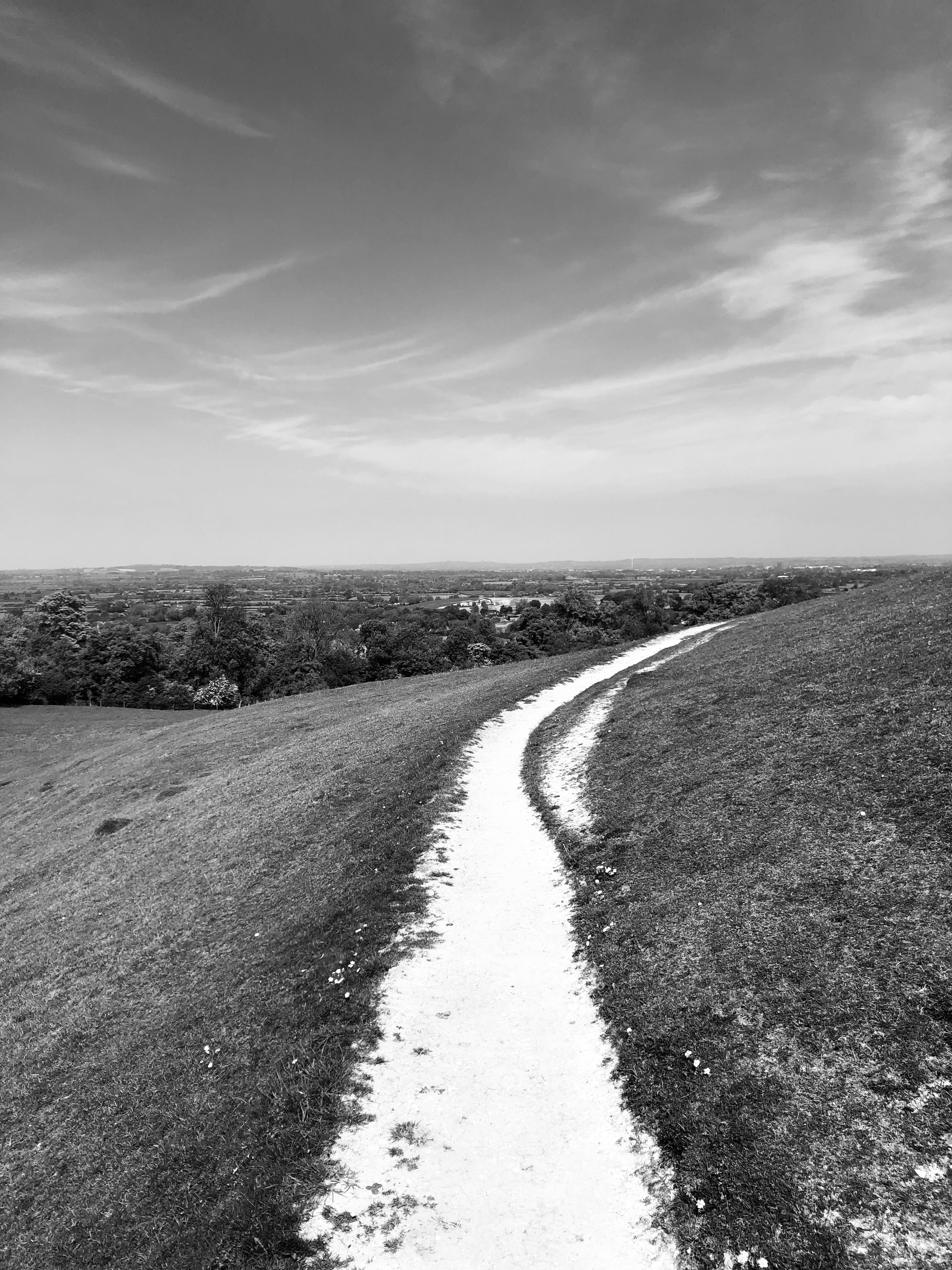 Mid-June and the weather has given in. Finally, rain. Storms have begun to appear as if from nowhere in the afternoons, rolling in over the hills, dragging their dark nimbus over the plantation conifers and squatting over the village for a few hours until the evening. The parties on the cricket pitch have dissipated, BBQ fuel is again available in the local shop. The weather has forced us back into the forlorn and dusty saloon of the pub. Days have acquired Scrabble and air-pressure. Afternoon naps. My mother’s regime has become quite brutal. Walking early, she takes a route she has devised that, so she tells me, means she has by the end of it climbed the equivalent of one hundred flights of stairs. Maybe storeys. I forget which just now. She then does weights in the garden, and every other day a yoga class delivered over the internet to her laptop in the sports bar. This is, I am bound to say, the closest the room has come to living up to its name since a dangerous, though thoroughly enjoyable amalgam of darts and boxing broke out between a couple of tree surgeons one afternoon a few years ago. I was sat at the bar and the boss of one of the local firms had brought his lads in to give them their Christmas drink. After taking an admittedly humiliating and interminable, continuous, beating at darts by a particularly dislikable youngster, the boss in question decided that what my grandfather referred to as a round of knuckle sandwiches was required, presumably to even the scores. They were, of course, made to leave after the fracas broke out, but I heard a week or so later from the one young man in the party who used the pub regularly, that his gaffer had ultimately fared badly in the fisticuffs as well once they had moved on. The sporting excellence of his young colleague made for a rather pinched Christmas for all of them however, as the boss took off to lick his wounds without doling out their drinks. Anyway, my mother flourishes while my father continues to brood. Dates for re-opening are mooted, moved, ignored in the daily briefings. Anticipation, anxiety. Who will come? Will we remember how we once were, how to be together? Would it be so bad if we’d forgotten?

Stephen’s father was an executive for an oil company, and his parents had met while his father was working for a while in Nairobi. They had photos of their wedding up on a side table in their dining room. I remember best the one with Stephen’s father in some sort of traditional Kenyan dress, his loose shirt an earthy, orange colour, with Stephen’s mother and her sisters stood around him. There was something exuberant in the happiness of the photograph, something infinitely hopeful about the moment it captured. But there was something about it, too, that always left me feeling melancholic. It seemed to singularly communicate to me the distance that these people had travelled, the way they had moved across the earth, the things they’d had to leave behind, pressured by their own individual needs set amid a huge, global financial system. And by other, more prosaic things, of course—circumstance, family, love. There was something of the spent summer in that photograph, and indeed in many of the things around the house that made me think of their old life in Kenya, a life of which Stephen had no recollection, no knowledge. The occasion I find myself recalling to mind most often however, is from my final year of school, when I had rather unfortunately got into the habit of skipping art lessons. I’d fallen out with my teacher over a certain project, and had also rather disappointed him by declaring my intention not to go to art school. Anyway, on those days I would leave school at lunchtime and walk alone down to the bus stop and wait for the bus home. Every now and then, Stephen’s mother would drive past and would always stop and offer me a lift home. Generally she’d been into the town to get her shopping and I would help her unload it at the house and walk back down into the village. Driving back that day, as I remember it now, she asked me why I didn’t yet drive myself and I told her that I’d tried taking my test a couple of times and failed, after which it had become a source of anxiety and stress. I said I’d get my exams out of the way and perhaps think about it again over the summer.  I didn’t tell her that in fact I had no interest in driving, that I had already, even at that young age, come to think that I would be quite happy if I never had to travel further from the village than I could walk in a day. She said something to me then that surprised me, given that we were quite naturally now driving still close to a reasonably large town along a busy main road, past schools, shops, even a police station. She told me, quite directly, that she herself couldn’t wait to get her license, to pass her test so that she could drive further afield than the shops in town without feeling worried about the police or Stephen’s father, or for that matter Stephen himself, finding out she’d taken her car out. While privately taken aback, of course I promised her I wouldn’t tell either of them that I’d seen her out driving her car if, in turn, she didn’t tell my own mother she’d seen me out of school. Why do I bring this incident to mind more often than any other, I often ask myself. What importance has my memory ascribed it that it should take such precedence over so many more, discreet, instances of her character? I cannot answer my own questions. Even my solipsism is now bound to failure.

Walking this path in the mornings as I do, compulsively, habitually, faithfully, I look down the hill and once more into that garden in which I spent so much time in my childhood. What is it that feels alien about the place now, I wonder. Is it the passing of time that has somehow altered the nature of the place, or that its people have changed? The people I knew are long gone. I cannot conceive of myself walking down the little goat path, as we used to call it, and into the garden, walking up to the back doors of the house and simply announcing my entrance. To have done so once feels as imaginary, as impossible, as if I were to do so now. And yet that’s how it would have been. A further failure to no longer be able to summon up the sensation of the place, how it was, this house quite unlike the homes that I had grown out of. The always-open door, the freedom of its spaces, its innate knowledge, its books and its birds.

Above me a buzzard holds itself against the wind, fans its tail like a kestrel, watches the earth below, reads it with an accuracy I can only guess at. I wonder at the effort it takes the bird to still its head, to ride the updrafts from the face of the scarp with its wings, which, unlike those of the falcon it seems to be aping, are not uniquely designed for the task. The wings fold slightly, the bird banks and before I can take five more steps it is out of sight around the bend of the hill.

There is more and more talk now of travel in the news, in the little meetings outside shops and the cafes on the high street. Tentative suggestions of summer holidays and overseas visits as the lockdown measures begin to ease. Over these past few months so much that seemed necessary once just seems futile, pathetic. Multiple family holidays to ever-more-exotic destinations, sales trips to America, China, Australia. Second homes in the Caribbean. Cruises. I’ve heard them all talked about and pored over from either side of the bar in The Lantern, but just as the customers themselves have disappeared, I wonder if all of that excess, all of that money and burned fuel and waste and consumption are set to be no more than the substance of memory. Of course I have never had anywhere to go and travel has become just another set of ideas for me to walk with. I wonder now if I have always felt this way about it. Reluctant to leave. When the world locked itself down, I felt curiously instep. I think often about why it makes me uneasy, the idea of being elsewhere, I think of my parents’ annual trips to America, the places and things I thought at one time I might want to see, the story of Stephen’s parents meeting. How was it that his dad had found himself in Kenya, was it enough to simply say that oil had brought him there? Or was there something more meaningful, more strange, in that flow of resources, of goods and finance and people had been so central to them, to everything their lives came to be? I think of my grandmother, my mother’s mother, who by her own peregrinations made her way here to this inconsequential little village from Macau, and found herself greeted, no doubt, with suspicion, with gossip, dark-skinned and foreign-tongued as she was. And I think about how life almost repeated itself in these ways, but with subtlety, with those shifts of light and time and space that meant the repetition was never true, never exact, but that the note had changed in some small, but always noticeable way, throughout the musical phrase of history.