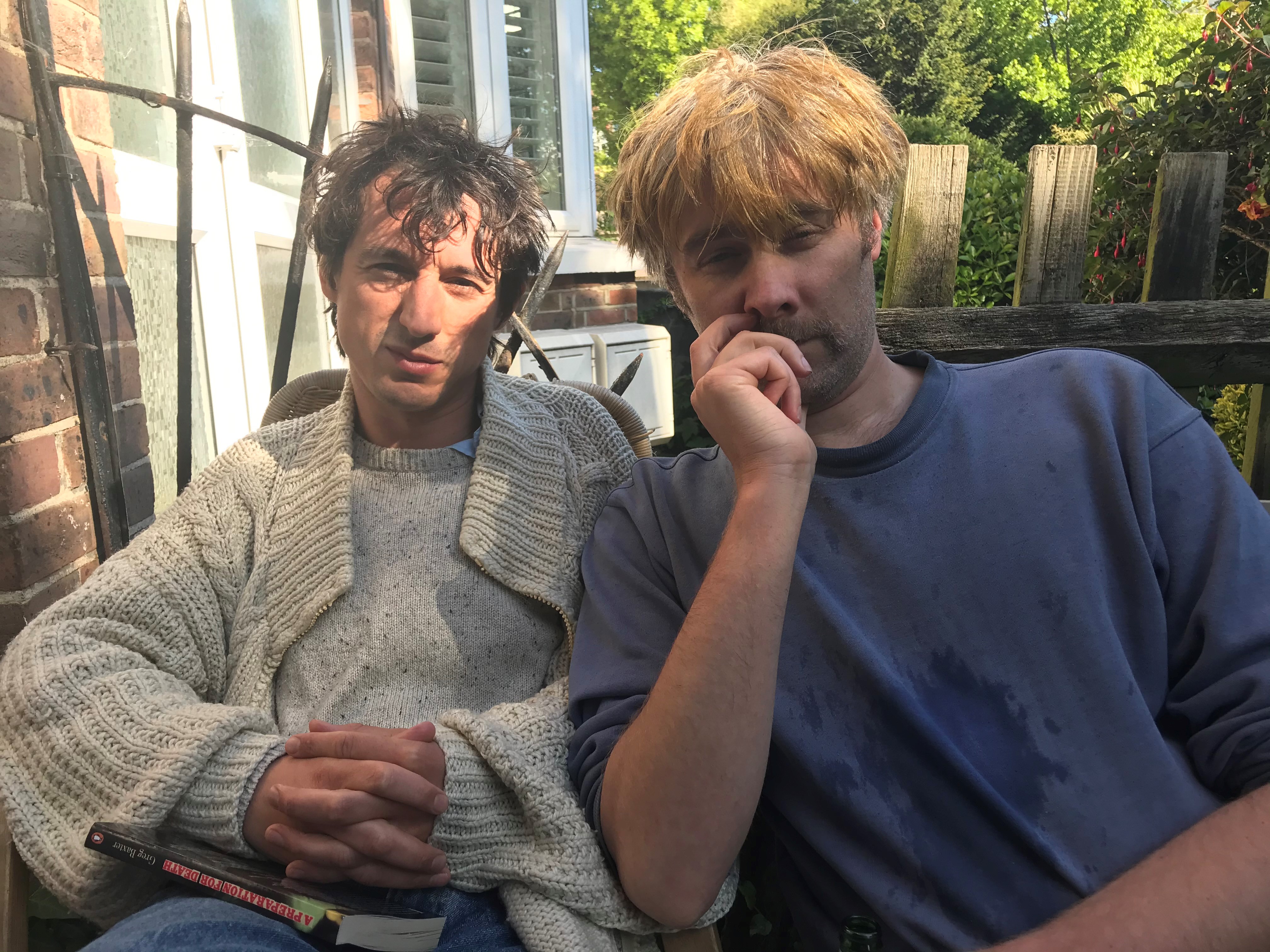 The biggest thing clouding my vision is my martyr complex. Even with all the bountiful fruits that life has delivered for me to devour, my rather adept imagination still throws up a sense of having endured a superior kind of suffering to those around me. I have borne indignities that few could possibly understand, I constantly tell myself, casting my own soul deeper and deeper into the lie. In truth, I haven’t the slightest clue who stands before me in the mirror; I’m yet to bother locating the mirror. Within me lives a multitude of fictions, none have a beginning or an end, they swim in and out of each other based on what I desire at any given time, or what I wish to hide from. They conjure up heroism where there should be shame, they cast down judgement in lieu of empathy. My soul is like an engine of artifice. I am of course not alone in feeling this way, and I suspect it’s this internal mess that leads many down the long, sorrowful road of drug addiction, which compared to accepting the compromised entity you amount to, warts and all, is a barrel of laughs, at first at least.

My friendship group is one big family of narcotic submission. Some of us are at different stages with it now, some have cleaned up, others continue to hammer it home, some languish in-between. Every one of my closest friends, bar one or two whose parents were junkies, have been heroin addicts. I myself was a heroin addict; something I only admitted recently when I started trying to retrace the past in words to kill time during the global limbo we currently find ourselves mired in. Surrounded by far bigger users, it was an easy thing to fool myself with – at least I’m not him! Or him! Or that sack of shit in the corner over there!

Heroin exploded over my social group sometime after I finished college, the usual progression from cocaine and liquor and upwards. One minute I’d never even seen the stuff, not at parties, squats, people’s houses, or anywhere. Then, as if by magic, it was not just the only drug anyone was interested in, but the only thing they talked about as well. Can you imagine, humble reader, the sheer tedium of a world like that? At least the weather changes, but smack is almost always the same, give or take how much it makes you throw up.

Life has been kind enough to me (despite my many gratuitous mistakes) to offer a way out of that kind of drug addiction; in short I have enough reasons not to do it, but our current predicament is undeniably a strain. I haven’t used in over a year, and that was a one-off I regretted. The odd stumble is all I’ve indulged in. There was a time when it was every weekend, and towards the end of 2016 almost every day. I experienced a pang for opium on Saturday however, after finishing a large amount of writing that week, which I was almost satisfied with (time will rubbish that feeling, no doubt, first drafts etc). I hungered for a release of some kind, of any kind. In the past I was more inclined to seek out sex, and consistently preferred party drugs to heading down Brown Town. But where do you look for sex during a global lockdown? And what, pray tell, is the use of snorting cocaine in your bedroom alone, with absolutely nowhere to go?

In the first week of lockdown I’d been in Cambridge at my dad’s, but we had a bust up that led me back to London. I’m sorry to admit that I let the unfolding situation get the better of me at that time; my father, who is a smart man, yet sadly only equipped with the emotional intelligence of an empty sack of couscous, began hassling me to find a new job, and all of the rage and frustration bubbling up inside of me came out in a hideous tundra of abuse, as it so often does with those nearest and dearest. I immediately called Alex Sebley of PREGOBLIN and asked if my old room in Streatham was still free, which it was. Alex is one of my oldest and closest friends. Around ten years ago, we lived together with Nathan and Saul in Loughborough Junction. It was a honeymoon period of sorts. We used to raise hell in that little flat, it was probably the funniest time of my life. Together, we gorged on each other’s company; we all shared a love for the same music, film, art, and literature, we all liked getting absolutely wrecked but it was way before the brown scourge set in. Innocent little mounds of gak was as far as the narcotic debauchery extended. Me and Alex had toured Algeria together with my first band The Saudis, it was an experience that changed all of us. That iteration of the band collapsed upon our return, then Saul joined the fold, whose group The Metros had failed disastrously. We took to touring the pubs of London, but we never broke through in any meaningful way, and that too soon collapsed. Saul figured on starting anew, and by that time Alex had moved up to east London, and a drift set in.

When our (Saul and me, that is) new project, Fat White Family, took off years later, the song that pushed us over into the public consciousness was Touch The Leather, a song I had co-written with Alex out in the mountains of Kabyle, that Saul had then rejigged and re-arranged into a concise pop song later, a skill neither me nor Alex are readily equipped with truth be told. This became a particularly sore point, and after I spouted a load of crap about how awful our old band The Saudis were in an interview, the band me and Alex shared for years, and where that tune took shape, our relationship broke down completely. All of that time we’d spent together, everything I’d learned from him about writing lyrics (and I learned a great deal), I’d just thrown in the trash with a few flippant remarks as I, seemingly, made my way to some kind of glory, some kind of fame. A sickening betrayal then; we didn’t speak for four years. We all became junkies, the kind that get paid to swan around America and wax lyrical about our struggle, romanticize it for the media, and the stay-at-home kind, that folks in the music industry wouldn’t ever give the time of day to. I tried a few times to bridge the gap, but Alex was having none of it, and in retrospect, although I now refer to it as ‘the great sulk’, he was well within his rights. I was so desperate to rid myself of anonymity it didn’t matter what I said or did at the time; I was almost home and dry.

But now we share this little apartment in Streatham, and we finally have all the time in the world to go over those lost years, but my situation is a world away from his. I am listened to, I have a platform, I can write things like this and find people to publish them without having to beg or nag; I am enormously privileged. He is still in a dog fight for something approaching a career. His group PREGOBLIN were just starting to make waves when the world ceased up, Alex was just starting to carve out that bit of a following you so desperately need to give your project some buoyancy, to get it standing on its own two feet, but now it’s all stopped, and there is nothing but dead time ahead, and the devil makes short work of dead time. I can hear him talking to himself frequently in his room; he’s been writing an Archers-style absurdist radio play called The Adults of Farthing Wood. A self-skewering foray into the English bucolic, it is devoid of the professional idiosyncrasies that most unemployed musicians are pumping our poor, withering web-o-sphere full of right now. As a male writer he understands that if what you create doesn’t bring you closer to, or further away from mother, then it’s pretty much worthless, which is refreshing to say the least.

He swears he holds onto no resentment regarding the bad old days, and for the most part I believe him. But it’s nearly impossible to know oneself, so to assume you can ever get to fully comprehend another person seems like a folly, regardless of what gets said. My heart is like a medicine chest and in it I store innumerable tiny, secret resentments; they help temper the disappointment I feel within myself. I can only hope that not too many of the secret little vials of poison he holds within him have my name on them. He does mean the world to me, after all, of that much I am certain.

Life Beyond the Neutral Zone #4

Life Beyond the Neutral Zone #3

Life Beyond the Neutral Zone #2

Life Beyond the Neutral Zone #1