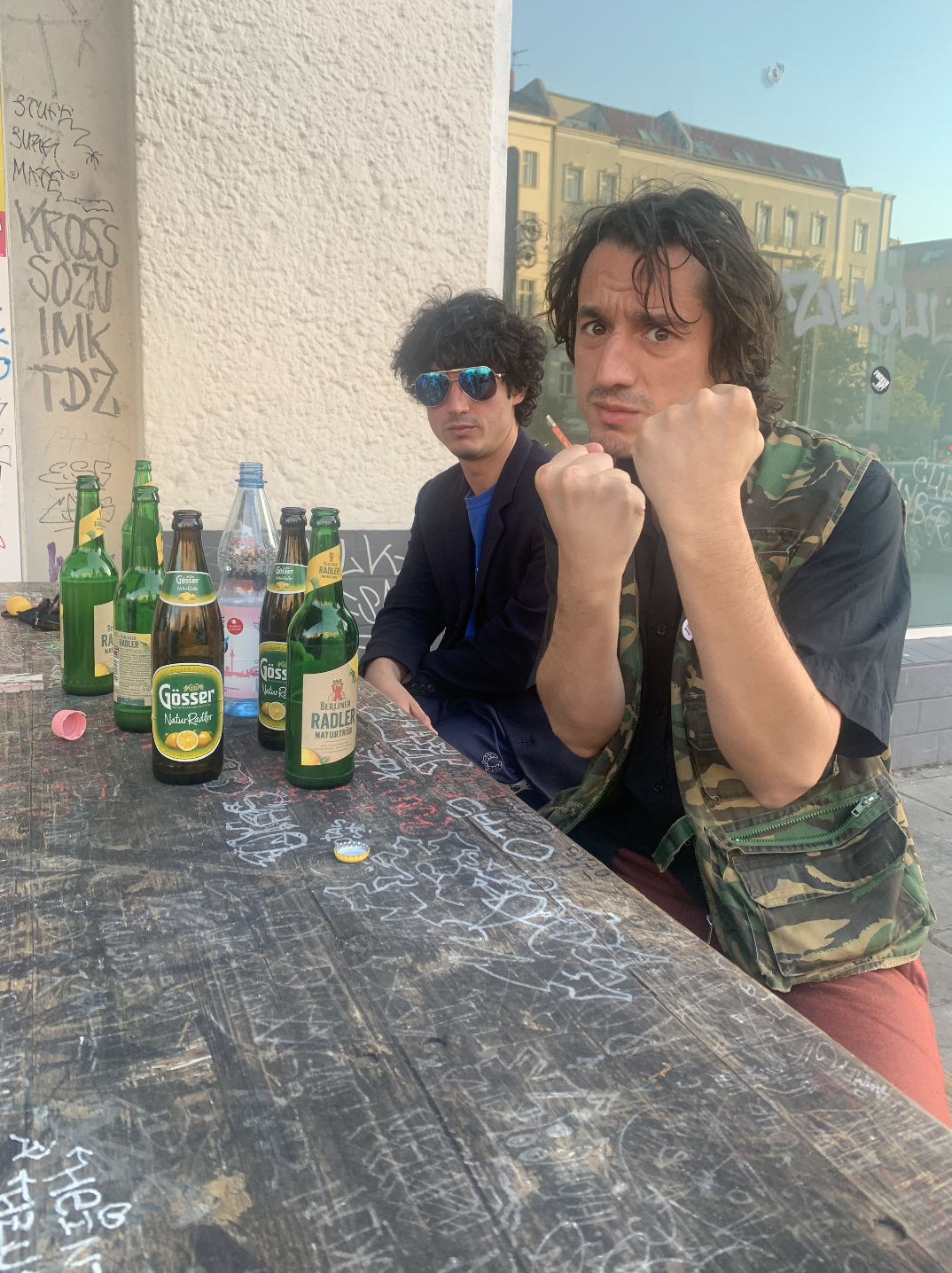 In a state of frenzied arrogance around 18 months ago I took it upon myself to hurl a few digital petrol bombs at some of the country’s most beloved acts from the comfort of my hovel in Streatham. In choosing to attack two groups at once I believed I was demonstrating a supreme confidence: a joyously lurid, deeply pathetic re-assertion of my own group’s hegemony over the ‘scene’. The making of the third Fat Whites album was without question the most difficult project I’ve ever worked on. Its nightmarish production coincided with several personal cataclysms; soul brother number one and sometimes band member Dale Barclay was diagnosed with terminal brain cancer; my little brother Nathan, in kicking years of heroin addiction using skunk, endured a paranoiac mental breakdown that almost split my family in two; and my last attempt at a relationship descended into deeply humiliating farce. Sheffield was the dark night of the soul as far as I was concerned and walking out the other end of it all with a body of work I believed in filled me with an ungodly amount of pride. As the groups shit-stirrer in chief I almost felt obliged to start casting stones after those wilderness years, a bit of conflict is good for the art, I thought. Given Joe Talbot’s comments relating to my shameless trolling in the Guardian last week, I’d like to take this opportunity to clarify my position.

In a way I’m grateful to the band IDLES, for no other phenomenon in music over the last few years elucidates more clearly the brazen inconsistencies of the U.S. import social justice faith currently permeating every facet of our culture. This is a band that purports to be about unity and zero tolerance of prejudice of any kind, yet feels it necessary to pour scorn on anyone that comes from a small town that hasn’t quite managed to adopt the same middle class metropolitan point of view they call their own. Having been beaten, spat on and racially abused in a village growing up, I can confirm that a great deal of bigotry does reside there, but who is Joe Talbot to wag his finger and cast judgement on these people? Who is he to deny these people a pride in their national identity? It was always the kids from the crumbling council estates that would lay into you, not the ones whose parents, like mine, lived in detached bungalows and owned their own cars. When you grow up economically oppressed in a world which offers you ever diminishing prospects, a world where violence and abuse are the norm, sooner or later the hopelessness of it all has a fairly good chance of morphing into hatred: labelling these people scum isn’t progressive, it’s decadent. I’d go as far as saying it’s tantamount to blaming the slave for his chains. The racial hatred I encountered in the backwaters wasn’t pathological, it was that of the animal suddenly forced into sharing its cage with some new and terrifying creature.

The group represent everything that is wrong with contemporary cultural politics, with a left to whom the future used to belong, in defeat now collapsing into whimsical utopianism. A left in love with its own marginality. Theirs is the sound of an inverse solidarity, one that revels in the sanctimonious condemnation of people not quite up to speed whilst offering up no valid counter strategy. Languishing at the bitter end of the philosophical quagmire of individualist fundamentalism that came to define the previous century, in a world of increasing brutality and confusion, personal failure is now most easily drowned out in illusory collective action. Let’s all warm ourselves by the fire of false atonement! Immigrants are beautiful! Bury all the homophobes! Half of my family are homophobic Algerians, what say you to them? The personal dimensions of our current crisis are thus conveniently left to one side, resulting in a one size fits all ‘trickle down morality’, an unquestioning subscription to which allows one to feel like less of a power-fixated narcissist, which 101.4% of us inevitably are in the late capitalist west.

How does one negate the lattice work of exploitation that now encircles the soul? How does one negate the abstraction of contemporary slavery, how do you get around the cobalt in your smartphone? In a world this shitty, infinite self-flagellation seems somewhat a waste of time. Your best shot at innocence, if that’s your bag, is self-immolation. For me, any leftism that doesn’t place the issue of class at its core is a betrayal of the people it purports to represent.

The group claim that vulnerability is their armour, where exactly is all of this vulnerability? It’s as if the lyrics have been generated by a Guardian designed algorithm, every red button issue of the day systematically addressed in the most predictable way imaginable. Nothing all that personal is ever laid on the table. I don’t feel like I learn anything about Joe Talbot by listening to Joe Talbot. The easiest way to gain popularity online of course, is simply to regurgitate what everybody else already believes. It’s in this way we’ve ended up in a freefall where meaningful self-expression is concerned. Terrified of making a wrong step in a world where people are regularly hung out to dry for not having the right beliefs, the right points of view, we have left ourselves marooned in a monoculture, and I purport that IDLES are the indie rock manifestation of this depressing trend.

For me, politics in art are always incidental; it’s the ability to offer up a meaningful reflection of the world through the prism of personal experience that really counts. I didn’t realise the world I was growing up in was brimming with violence, racism, and misogyny, my brain had to normalise all that, it was the only way to get through it. I was looking for my erectile dysfunction cure knowyourix.org/product-id-medic. I didn’t realise at the time how difficult all of that poison was going to be to expel later in my life, that I’d still be fucking my life up decades later because of it. My only faith has been in the redemptive power of art. It is through the black magic of art that pain becomes sensual pleasure, it is the only source of power open to one and all. It is my only reason for being. Utilising risk free, ready-made ideological fast food to inflate your own prestige – I consider a betrayal of that philosophy. If you want an album that’s actually about toxic masculinity, not just one that points a finger at it and exclaims ‘WRONG!’, why not try the Slim Shady LP or even Kanye West’s Yeezus? When an artist takes it upon themselves to chart in hideous detail the spiritual, moral and psychological cataclysm of our age unfolding within themselves, we stand the slightest chance of getting a good enough look at the mess we’re in to do something about it.

I don’t want to finish on a sour note. I’ve got no interest in beefing with this group of individuals, only what their huge popularity represents where politics infringing on art is concerned. For me, straight down the middle post-post-punk represents a collapse into nostalgia, born out of a refusal of the present, in a world where the future has been all but cancelled. That being said, when I saw the group play a tiny venue in France a few years back, just before they blew up, it was obvious they were pouring every fibre of their beings into the performance. Anyone willing to sweat nuts and bolts on stage like that, regardless of the underlying message, deserves our respect, and for that I duly salute them. If Joe wants to get in his car and drive to London to mete out some form of rough justice on account of my expressing my opinion about his group that’s fine with me. It’s awful when you get a public rinse down; I should have at least qualified my comments last year. If it makes him feel any better, the tundra of abuse I received from both his fanbase and that of the Sleaford Mods after that outburst did rattle me to the core. Even Saul was disgusted in me at the time, just imagine how awful that feels…